Maestro Of The Movies - John Williams Live At The Hollywood Bowl!

Composer and Conductor John Williams celebrated 40 years of making movie music with the L.A. Philharmonic this Labor Day Weekend with a three night stand at The Hollywood Bowl. Hollywood is the birthplace of film, and movie fans loved every moment. Williams had Steven Spielberg there to help him celebrate, and their unparalleled film collaborations made for an evening of oohs and ahhs as we looked back on their iconic film moments with their scores played live by the wonderful L.A. Philharmonic. After wanting only to be at the beach this weekend, it took this to get me back across town on a holiday weekend ... and it was WELL worth it. 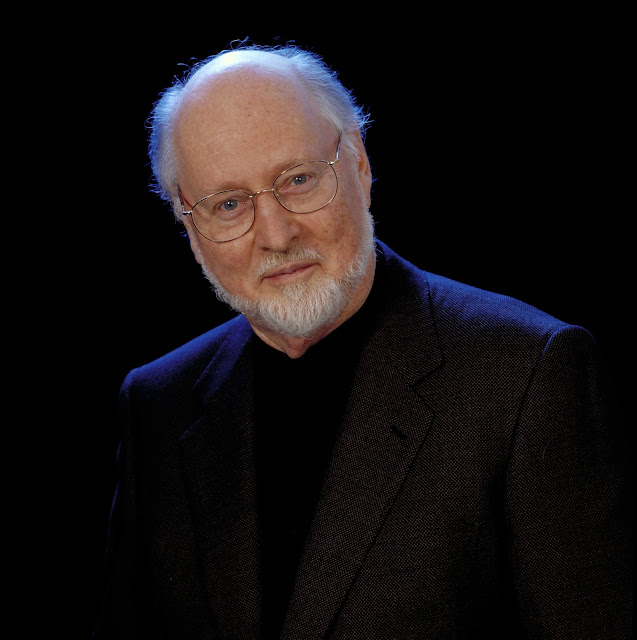 After the National Anthem (that my friend Deb and I took a knee for  - or stayed seated, rather - out of solidarity for Colin Kaepernick this weekend), Conductor David Newman opened the program with the Williams composed Olympic Fanfare and Theme, accompanied by clips from the big Olympic moments over the years. I love the Olympics, so this was a rousing and emotional way to start. I had a lump in my throat all night, if I'm honest, and the U.S. Army Herald Trumpeters only made it worse. SO many nostalgic moments came up, and reminded us once again about the GOOD things in these United States - which have been harder to recall of late. This night was all about the good stuff.

"The Cave Sequence" from Raiders Of The Lost Ark was next, and one guy next to us was so excited and gasping I'm pretty sure he'd never seen the film. I barely remember Minority Report, but its "A New Beginning" piece was awfully pretty. I definitely barely remember Hook, but the same goes for its beautiful "Flight To Neverland", shown with a great montage of flight in cinema (including my favorite from Out Of Africa). To celebrate the Centennial of Leonard Bernstein, we heard a rousing To Lenny! To Lenny! composed by Williams that would have played excellently at Tanglewood. Newman wrapped up the first half with the Bernstein's overture from West Side Story (with film clips) and his suite from On The Waterfront. Both were sublime, and brought us to the intermission that allowed us to break out the wonderful cheese platter that Deb had created. We started our friendship 25 years ago on the set of Little Big League, so I was especially happy to be there with my friend who is my friend because of the movies. It was special.

After filling up on cheese and charcuterie (and wine), it was time for the Maestro himself to take the stage. His "Boss", Steven Spielberg, joined him (after introducing him as "The preeminent Maestro of film music" (there really is no one else who even comes close) to share their stories from their 45 years of working together on their classic films. They began with a lesser known, but tear-jerking piece from Lincoln, "With Malice Toward None", that featured trumpet soloist Thomas Hooten. It was so beautiful you couldn't even move, you just had to sit there and take it in. It, as most of the clips did, made me want to immediately re-watch Lincoln. 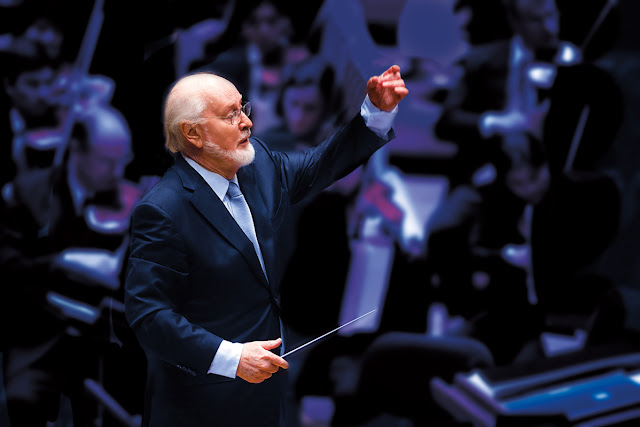 When the applause for that one died out like an hour later, the dynamic film duo took us into a film class, showing how differently a piece of film comes across without its score. They played the "Circus Chase Scene" from Indiana Jones and the Last Crusade (the one with River Phoenix as a young Indy), and showed it once with no music ("It's starting to feel like a Sundance film." - Spielberg aside), and then the L.A. Phil charmed it all up playing the music that would later join the work. It was remarkable to see the difference the score made to the scene, and further illustrated just how important this epic collaboration has been over the last four decades of cinema. It was also fun to hear Spielberg's little tidbits like, "This was the first time we introduce the whip."

"The Duel" from The Adventures of Tintin (never saw it) was lovely, and a montage of famous swashbuckling scenes played over the music. It was cute to hear what people cheered for: Johnny Depp in Pirates Of The Caribbean. Puss N Boots. Tom and Jerry. Kermit The Frog. Nostalgia runs deep! The orchestra played so seamlessly that you several times actually forgot that you were hearing it live. There was no mistaking that the theme from Schindler's List was live, as violin soloist Bing Wang was there to break our hearts with her plaintive strings. Wow. I can hear it in my head now, and it feels no less emotional. What a masterwork. For real.

The best was saved for the finale, when they played the Finale from E.T. The Extra-Terrestrial. Spielberg introduced it by saying, "I can direct bikes to fly, but the music makes it soar." They proved this soundly when that famous scene came on, and you can still hear people gasp when the bikes take off from the hill. I believe I teared up. It's just so awesome. Still. People were going crazy, but then they REALLY went crazy, when as the real finale, they gave us Star Wars. The entire Bowl was filled with glowing lightsabers, and everyone was conducting along with Williams. The music was from Episode 8, I believe The Rebellion Is Rising. The military brass was back, and gave us the ominous Darth Vader theme that everyone knows and loves. It's so cool to turn around and see the whole place filled with people waving their light sabers and loving life.  Williams himself was presented with a lightsaber when it ended, bringing on yet another standing ovation. There were FOUR curtain calls, but no encore, as Williams did the hands to side of your head sleep sign, signaling that now it really was over. No one wanted it to end (What?! They're not gonna do Jaws?!"), but all good things do. 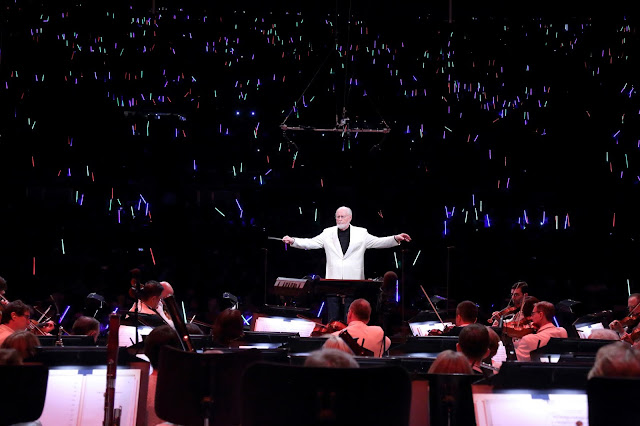 What a Labor Day weekend highlight! Getting to see all the wonderful Hollywood film music IN Hollywood where it all came to life was extra cool, and gave a sense of renewed pride in the business, and in the town. Film touch so many lives, and good stories make up our lives. Thank you to the Hollywood Bowl for another fantastic summer night of music under the stars! It's the very best summer tradition we have in Los Angeles, and this one was a perfect example of why.

May this Force be with us all for a very long time.

*Photos Courtesy of The L.A. Philharmonic.