TV On The Radio And Grizzly Bear Rock The Hollywood Bowl

It had been a while since I'd been able to collaborate with my brother, Paul, on a show project, so when we heard that TV On The Radio and Grizzly Bear were teaming up for a show at the Hollywood Bowl AND Paul was free ... we were there. I've been to a lot of great shows at the Bowl this summer, but none of them really fell into the "Rock" category - and that's what we were in the mood for. 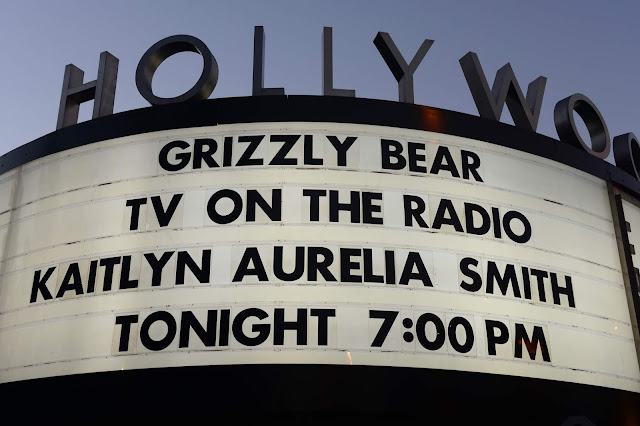 A beautiful Harvest Moon was rising as we took our seats in the Bowl, but the opening act was not rock. It was more like a little bit more upbeat spa music, with modern dancers interpreting it. Kaitlyn Aurelia Smith handled the synthesizer, while three dancers jumped around acting it out. It was o.k., but the Bowl was still pretty empty at this point, and most were pretty well focused on their picnics at this point (ours was courtesy of Bay Cities, and was delicious, thank you). I like listening to anything at the Bowl, so I was fully entertained, if a bit head scratching. 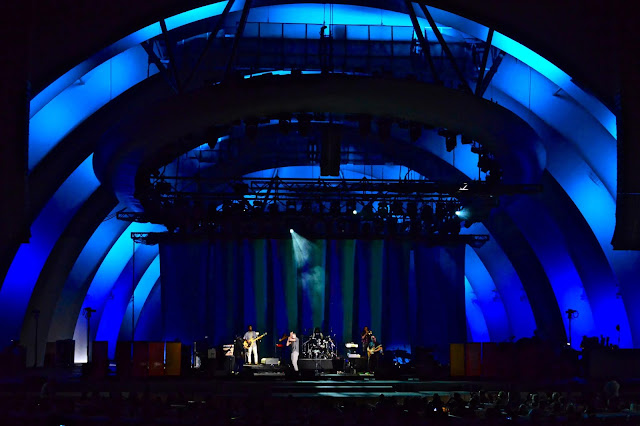 KCRW's Anne Litt took the stage to welcome everyone to the last "World Festival" show of the season, and got cheers just for being Anne Litt - deserved. KCRW is a great curator of shows, and this one was no different. I had read an article in the L.A. Times earlier in the week where both TV On The Radio and Grizzly Bear hinted at this being their last L.A. show - kind of going out with a bang at the big landmark venue that the Bowl is. They both sounded kind of over it and crabby (it was even entitled "Navigating Grumpy Old Manhood" - so we didn't really know what to expect for this show, but we were happy we'd see them before they hung it up. If they do. 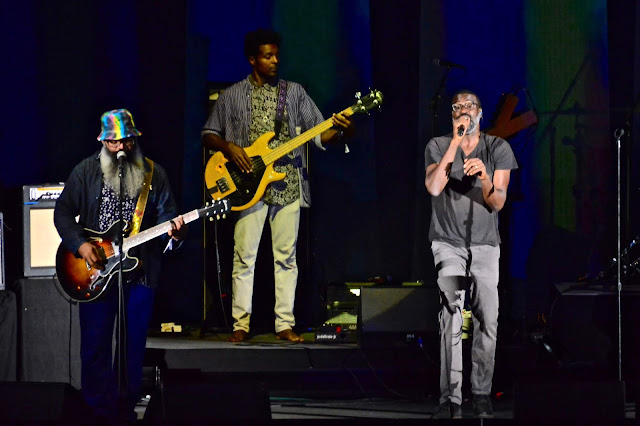 TV On The Radio was up first, and they were "Very pleased to be with you here tonight!" Tunde Adebimpe said, "We're gonna blow it that way, and we hope you'll blow it back this way!" It was  very atmospheric to begin with, and then they kicked into "Young Liars" and we got that rock we'd been needing. Adebimpe was dancing all stiff-legged in his style, and soon the whole place was - especially the dude right in front of us - FEELING it. 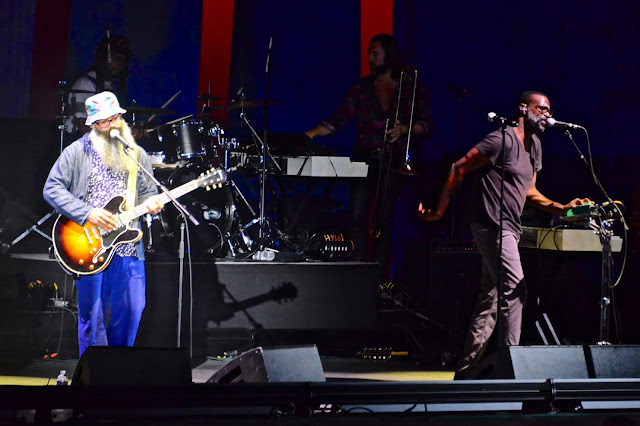 "Lazerray" went off, as did "Golden Age" and "Province" (that features David Bowie on its recorded version). Horns chimed in on this one, and man, the brass always elevates things, don't they? Love it. The Bowl's bandshell was all psychedelic projections during their set, and that also elevated things, as there was always something fun to look at. Little kids were dancing in the aisles during "Happy Idiot", clearly brought out on a school night by parents that dug these guys 20 years ago. 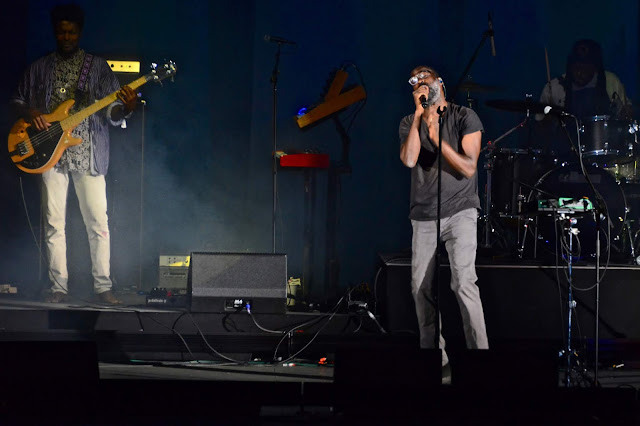 "Could You", "Winter", ("This is a song about the climate heating up, and affecting people ... but that's not happening") and "Red Dress" were all awesome (with Kyp Malone and his beard alternating lead vocals with Adebimpe), and "Shout Me Out" had them all shading their eyes and looking into the audience for their friends at this hometown show (as they've all since moved to L.A. from Brooklyn). "Trouble" is the song I feel like the whole country needs to listen to right now, as Adebimpe sings, "Don't worry, be happy ... everything's gonna be o.k." ... and for a moment at the Hollywood Bowl - it was. 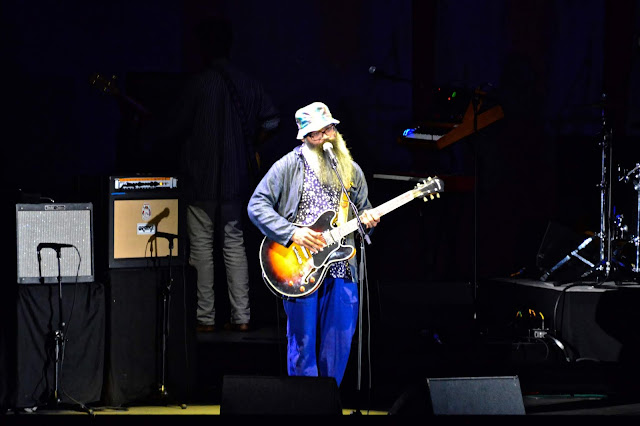 "Is it the full moon? Can you feel it?!" asked Adebimpe, and we sure did. It was beautiful out, and we felt the good vibes absolutely. "Repetition" was amped all the way up, super high energy for a song "Loosely about an amoeba ... that climbed out of the ocean ... became human ... got thumbs ... and the thumbs are now on a phone ... but you can vote with your thumb! Thumbs UP to the People!" Well, the dancers gave thumbs up to that, and the energy was so full throttle you thought it couldn't get any more hyped, but then they did "Wolf Like Me" and it was bedlam - at least in the box right in front of me. Thumbs up to THAT dude, 'cause he didn't let up for a second. Their last one was their first one, the debut single "Staring At The Sun" ... and it got TV On The Radio a standing ovation, for what we very much hope won't be their last time. They were AWESOME. 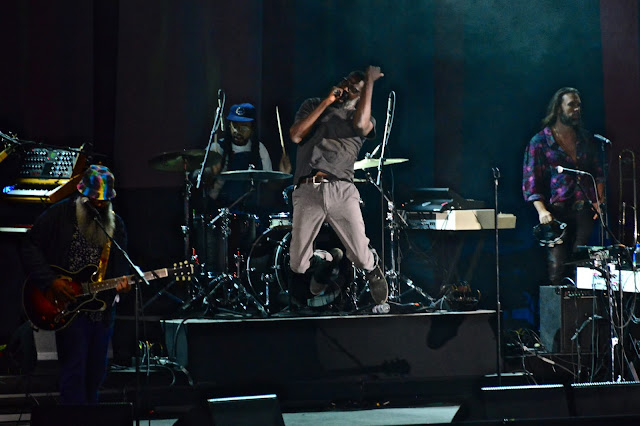 Intermission. Picnic. Wine. Chat with box neighbors. Compare notes on shows you've been to. Ignore the guy that said he'd seen them before and they were way better (there's always one of those guys). Look up at the moon. Lights go down - time for Grizzly Bear!

Grizzly Bear took the stage with no introduction, and started things off with the trippy sounds of "Aquarian". "Losing All Sense" was next, and singer Ed Droste (in his "With Pleasure" tee) commented that all three girls from its video were in the house. Fresh. "Cut Out" and "Yet Again" were both "Fine For Now" (then), but their energy just didn't match that of Tv On The Radio's set. Not even close (though the guy in front of me was just as active - it may have been substance-fueled though). It didn't help that their backdrop looked like an asbestos spiderweb, and they didn't utilize ANY lights or projections on the bandshell, so it just looked boring ... and kind of rubbed off on the sound, if I'm honest. It didn't feel special. It didn't feel like one's last show - if it was indeed that. (Grizzly Bear has more shows scheduled, but they're as openers for Florence & The Machine, not headlining their own Bowl show). Maybe it IS time for them to hang it up, if their boredom with it all is this relatable? The little kids were now dozing, and their parents seemed close. 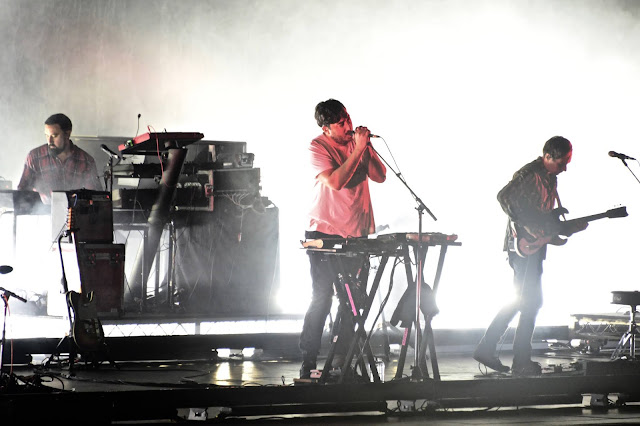 "It's such an honor to play here, let alone with these guys", said Droste in a shout out to their openers. "Ready, Able" - "Mourning Sound" - "Sleeping Ute" - "Two Weeks" - "Foreground" - "While You Wait For Others" (for contrast, TVOTR got Bowie to do backing vocals ... Grizzly Bear had Michael McDonald on this one ... and their sets felt that different) ... one was hard to distinguish from the next. 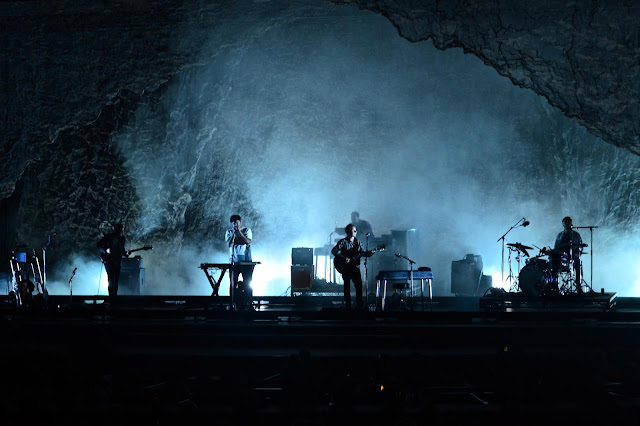 They did "Knife" and the really good "Three Rings", and then Droste said, "The clock is ticking, so we can't have much banter, but thank you to the crew!" ... and rather than talk, they did another song, and "On A Neck, On A Spit" was probably the high point, with the bass player doing a quick change from bass to sax that was impressive. 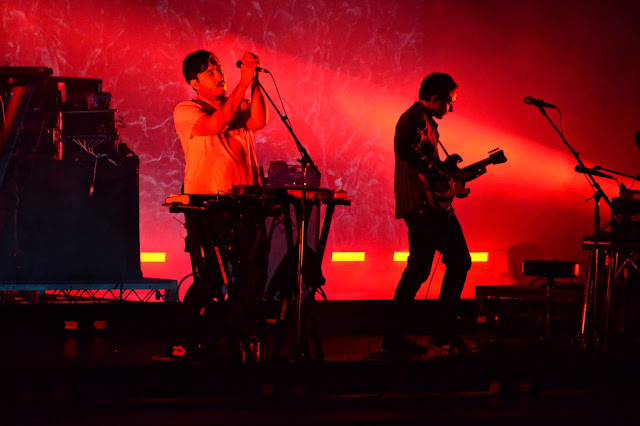 "There's no encore, but we feel so lucky to live here! Thank you and good night!" and the house lights came up and that was that ... and we all ambled down the hill humming TV On The Radio tunes. No matter what you see at the Bowl, it's always a great time, and this gig was no different ... just less WOW than it usually is, musically. The venue and the stars (and that moon!) are always wow though, and as another season of wonderful Hollywood Bowl shows comes to a close, we can count our lucky stars that Los Angeles gets to have this special place to share these moments of togetherness and music. We love you, Hollywood Bowl!