An Evening With Leon Bridges At The Grammy Museum

I've been a fan of Leon Bridges and his music for a while now, but hadn't seen him play live, so when given the chance to check him out at The Grammy Museum last night - off I went. I was there just last week to catch Greta Van Fleet for the first time too, so I've been learning a lot thanks to this excellent venue. 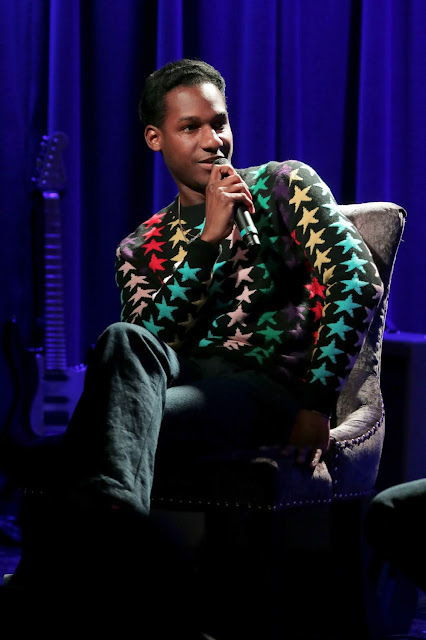 The two acts - and the vibes in the room - could not be more different, but there were a lot of similarities too. Grammy Museum Executive Director, Scott Goldman, introduced Bridges to the sold out Clive Davis Theater audience, and we settled in to get to know him better. A native of Fort Worth, Texas, Bridges was there to discuss his new album Good Thing. Decked out in a sweater with stars in rasta colors, Bridges was soft-spoken and thoughtful with his answers, and the energy from both him and the crowd was MUCH mellower than for the Greta Van Fleet guys last week ... but they're both very young, they both have influences like Sam Cooke and Otis Redding, and both acts are doing things their own way.

Bridges' debut album, Coming Home, blew him up right out of the gate, with it landing at #6 on the Billboard Top 200. That retro-soul sound placed him on all the tastemaker's lists, but Good Thing is the album he always wanted to make. He said the theme during the recording of this sophomore effort was "Blood on the mics", meaning he was all in, and not at all settling for what was comfortable. He considers himself a crooner, but heard comments like, "Oh, that's for white people," admitting that black audiences were more of a challenge. For this record, Bridges teamed with producer, Ricky Reed, which was a big switch, coming from doing nearly everything himself his first time out. Arthur Alexander had a singing style that Bridges connected to, so Reed encouraged him to go for it with his falsetto, but his lead track on the new album, "Ain't Worth The Hand" has a more Curtis Mayfield "The Makings Of You" feel.  As Bridges said, "I've matured ... it's sexier." That got a laugh, and Goldman had to say, "I'd say there's a little more swagger, are you feeling yourself more?" Bridges answered, "Totally." (He said that a lot, actually).

Regarding the "sexier" part, Bridges' mom said, "I don't know about that 'Mrs.'", (a racier track) but now she's cool with it. Goldman mentioned that "Lions" was his favorite track, a spare, raw one that features Bridges alone with just a beat and claps. "Yeah, I wanted to get weird with the flow on that track." I respect an artist the most when they do exactly what THEY want to do musically, and Bridges seems to do just that. "Honesty and truth are very important, and what I want to chase as a songwriter." 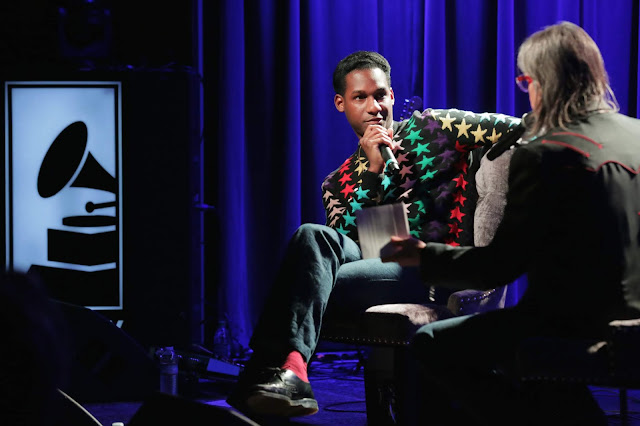 Goldman said that "Georgia To Texas" was like his life story in 3 1/2 minutes, and Bridges agreed, saying that he'd started singing at 12 years old after his Mom brought him to Texas from Georgia. He cracked everyone up when he admitted that he had been obsessed with Sisqó at that age, singing all of that dude's songs, and then really started going for it at around 20. He went to church every Sunday, but never sang in the church, interestingly. Bridges went to school to pursue dance (also interesting), but picked up a friend's guitar, and "now I know three chords." That led to open mics around Fort Worth, where it was heavily country music oriented, and he'd be this "black kid with a guitar."  He was inspired by a band called the Texas Gentlemen and soon met co-writers Austin Jenkins and Josh Block at a bar, through a common love for Wrangler denim. Jenkins said, "I'd love to record your music in all analog." Bridges was like, "Great! But I didn't know what analog meant."

Bridges did a lot of Sam Cooke covers ("Because they were easy chords"), and found his own sound along the way. Before he knew it, he was opening for Harry Stiles in arenas, which was crazy, as he said, "His fans have a lot of energy." His understatement got a knowing laugh. Likewise, when Bridges said his hotel room info in Argentina got hacked and posted on Instagram ... "That was a great tour." I bet.

You'll find Bridges these days listening to Young Thug, Kendrick Lamar, and Chance The Rapper, and he's also made his first foray into acting, with the tall order of portraying Gil Scott-Heron reciting his "Whitey On The Moon" in the upcoming Neil Armstrong movie, First Man. Wow. After that revelation, Goldman opened up the floor for a Q and A from the audience. The first guy asked if Bridges' faith had been affected by fame. "I still hold to spiritual values. It's shifted, but I stand firm in my beliefs. Someone asked about dancing, and Bridges responded that he emulates Michael Jackson, Gene Kelly, and Fred Astaire - the high bars. Asked about past and future collaborations, Bridges said, without hesitation, "Past - Bobby Womack. Present - Drake." I bet we'll see that happen. Some wise guy asked what was his favorite Sisqó song. "'Thong Song', man, c'mon!" Awesome.

Someone asked Bridges to recite "Whitey On The Moon", and he did it perfectly - as much as he could remember on the spot like that.  Asked what else Bridges would like to achieve, "I'd like to win a Grammy" - I see that happening too, and it couldn't hurt that he was in the Grammy's house.  More impressively, he concluded, "I'd like to use what I've been blessed with to help other people." Again, kind of like Greta Van Fleet! The musical future is bright, everyone!

Goldman wrapped up the conversation part of the evening by asking about Bridges' collaboration with the eyeglass company, Ahlem. I was delighted to find out that the proceeds from the sales of these glasses go to our very own Westminster Elementary in Venice! How wonderful! I also learned that Goldman lives in Venice too - Huh. Bridges himself bought a house in Fort Worth - "Being with family and friends is a nice way to stay grounded." With that, it was time for the much anticipated performance part of the night, and a full band (sans drummer) and backup singers joined Bridges on the stage. "Here we go!" 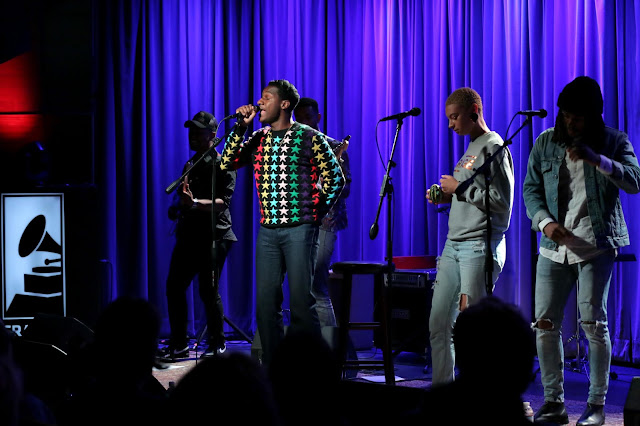 "If It Feels Good (Then It Must Be)" was up first, and as funky as the bass was, it felt a bit low energy (especially when the latest show I saw in this room was the all-out rock explosion from Greta Van Fleet). When they finished, Bridges said, "Our drummer just quit on us today, sorry about that," explaining what I had been wondering. Whoa ... I wonder what they're gonna do for their show at The Greek Theater tonight? "Bad Bad News" was next - and also real funky, finger snaps and all. The room was very quiet, which I read as respectful, but it was also a little awkward. It felt more like we were listening in on a rehearsal ... really good, just a little low-key. 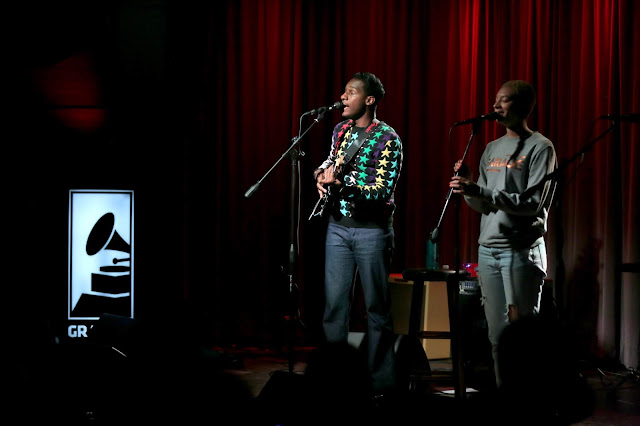 Bridges strapped on a guitar and stood alone save for a female backup singer to deliver my favorite number of the night, "River". I choked up, in fact, it was so gorgeous. I hadn't been feeling very well, just off and strange, and I swear, after this song I felt a little better. The power of  music to heal! I believe! That earned Bridges a standing ovation ... and earned us another song! This was the longest set I've seen at the Grammy Museum, and the room was more than grateful. "Thank y'all! We're gonna do a rock and roll one." That meant "Flowers" and its chorus, "I wanna tell you about the good news (good news)!" At a time when we all need good news perhaps more than ever, this night of music and learning together was just what was needed. There was another standing ovation, and then Bridges was off ... probably to go find a drummer for tonight's show at The Greek.

I'm so glad I got to chance to see this super talented artist in such an intimate venue for the first time. What a privilege ... and a healing! Thank you to the Grammy Museum, and to Leon Bridges and his band, for a night that truly moved the soul - with soul.

*Photos courtesy of The Recording Academy/Rebecca Sapp for WireImage.