Last Days Of A Bohemian Paradise - An Evening With Dotan Saguy

I finally got to see Dotan Saguy's great photography show at Venice Arts last night for the closing reception and conversation that would kick off the four day Venice Art Crawl Afterburn extravaganza this weekend. Last Days Of A Bohemian Paradise shows off the Venice Boardwalk at its most beautiful and poignant, as we all know this last beach community of color is very much an endangered species. Saguy has been doing in photography what I have been doing with stories - trying to capture the beauty and originality of this place while it still exists. 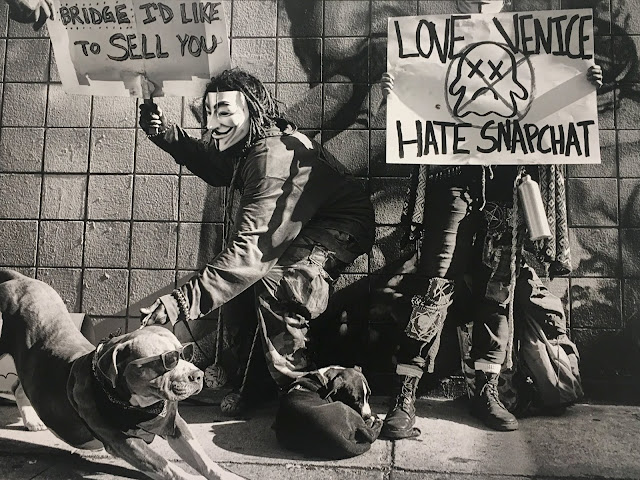 Saguy's book of the same name was also being celebrated (and I'm creating a book of stories too!), and we got to see its wonderful photographs enlarged on the walls of the Venice Arts gallery, as local characters mingled and discussed the good old days - and what we still have. So far. Artists and hippies and all the character that has historically made Venice great is being evicted ... and we all have to ask, as the photo does below, Why are you doing this? 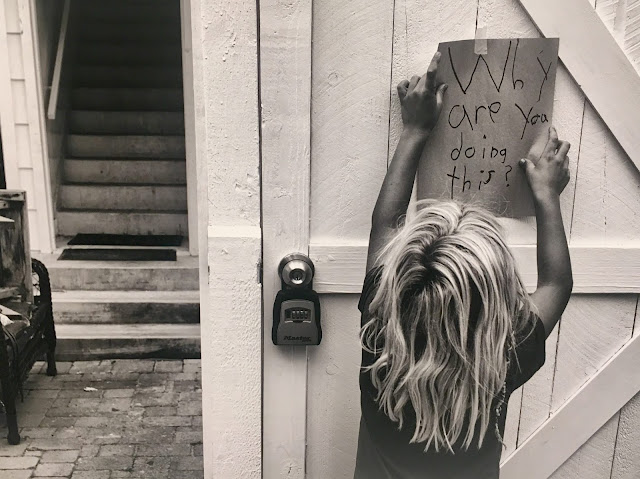 After an impromptu electric guitar set from Harry Perry that got folks dancing, we sat down to listen to Saguy speak on this fantastic photo project. It started super late (Venice Standard Time), but nobody seemed to mind, as Elisa from Venice Arts said, "Thank you for having a festive Venice attitude about the delay." Once the tech stuff got sorted out (maybe do that before the event next time, friends), Saguy shared the stories behind taking these photographs. He started shooting 25 years ago, and he knows that because he got a camera for a wedding present, and he and his professor wife just celebrated their 25th wedding anniversary. He took some classes and workshops, and assigned himself to go shoot Havana before it changed too much ... kind of like Venice. 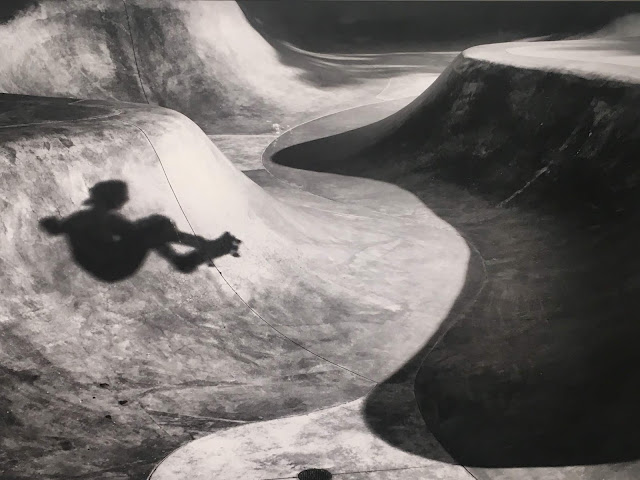 Saguy won a National Geographic contest, and the prize was an assignment to South Korea, so he was now a real professional, and that gave him the encouragement to pursue photography as a full-time career. He was drawn to and felt connected to Venice (like most of us who chose to make it our home), and he showed a slide show of his progression in Venice. Saguy spent three years shooting the Boardwalk and its denizens, resulting in his beautiful book, completed in the summer of 2017. That was the year I reigned as Venice's Neptune Queen, and I was honored to be included in one of Saguy's photographs in the book (and am now coveting a print!). 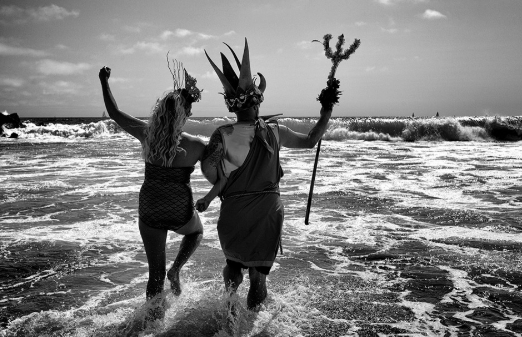 Saguy talked about "how inclusive and generous (Venice) people are with each other ... with a tenderness to it all" ... and how that is all in danger. The project is so great that the press has been phenomenal, which brings an awareness to how special Venice is - and a responsibility to us all to preserve it. Saguy's method is best summarized by the acronym "D.I.E." - which stands for Design. Information. Emotion. - all of the elements he feels are necessary to make a great photo. And it's all there in every piece of his work. There was a photo of a surfer girl, that until he discussed it, I didn't really notice the organization and geometry of it all, and how he fills the frame with something interesting for the eye in the foreground, background, and the focal point. His pictures really are worth at least a thousand words. 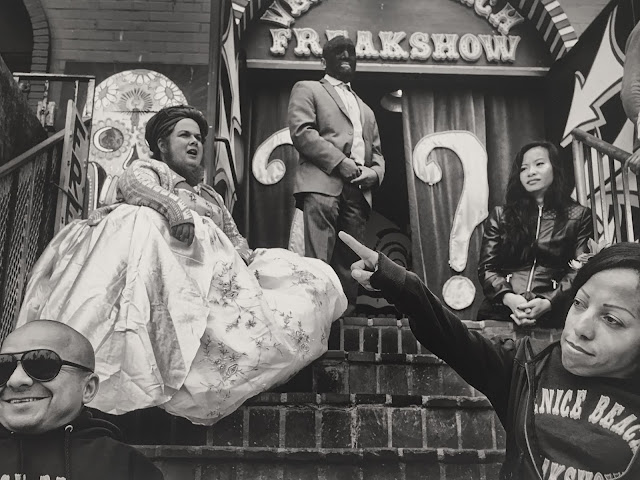 Shooting in all Leica black and white lends a timeless quality to Saguy's work, and at times it's hard to tell if you're looking at the 60's or the future - should the future remain cool. That remains to be seen, and Saguy felt a responsibility and an urgency to document what still left of bohemian Venice, and create a record (same here, Brother). The Venice Freak Show, the homeless, skaters, body builders, surfers, gangsters, snakes ... they're all represented here, in all their glory. 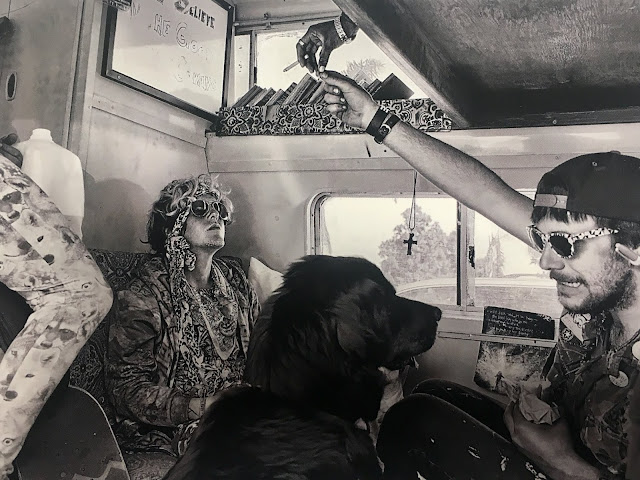 The Venice Boardwalk led Saguy back to Havana for his next project, where he will capture its own version of the Boardwalk, the Malecón. However, "I can't stop shooting Venice", so he's also at work on a project about the homeless and their pets, as well as one about Van Life. Awesome. 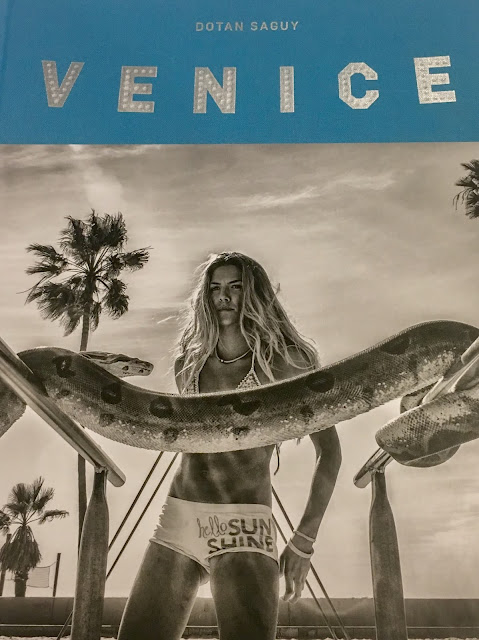 The Venice cast of characters celebrated with Saguy (seen below, the one who's not Harry Perry, Marcus Gladney, or Sunny Bak) until we got kicked out of Venice Arts and took it on over to James Beach, but I think we all felt happy to be together and to know that in some small way, we've all contributed to this creative mecca by the sea. With photos, stories, and each other - we'll always have Venice. 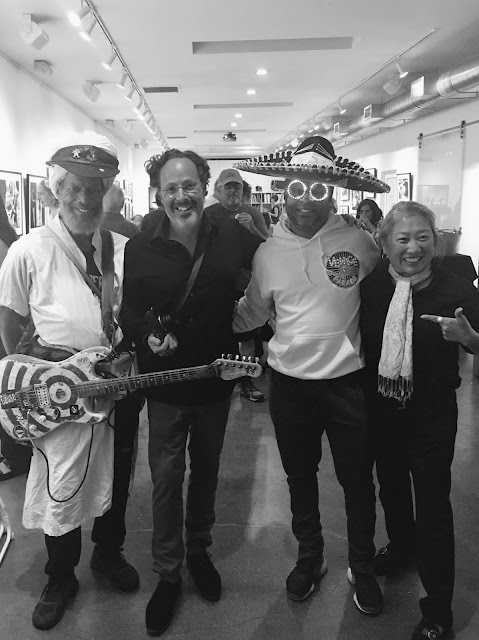 Last Days Of A Bohemian Paradise is available in book form and in photographic prints limited to 10 of each photo at www.dotansaguy.com. Saguy will also be teaching a Leica master class in Venice, March 29-31, 2019 (information on his website).