Pathway To Paris - Patti Smith And Friends Sing For The Planet

I keep saying that none of the big issues facing our world today will even matter if we're no longer able to survive on this planet. When Trump pulled the U.S. out of the Paris Agreement, it was a huge - and super embarrassing - blow to the work so many good people are doing on behalf of our Earth, and now good people are taking matters into our own hands to try to keep it livable here a while longer ... if it's not already too late. Seriously. 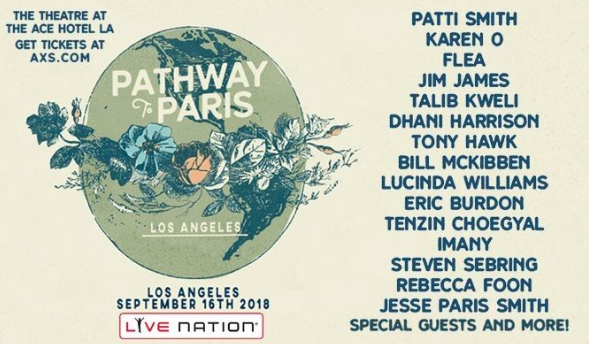 There was a great concert last night put on my the fine folks at Pathway To Paris, a group co-founded by Jesse Paris Smith and Rebecca Foon, committed activists and eco-warriors doing everything they can to try to help. Smith is also the daughter of Patti Smith, so they've got a lot of musical friends who share their enthusiasm to save the world. Quite literally. 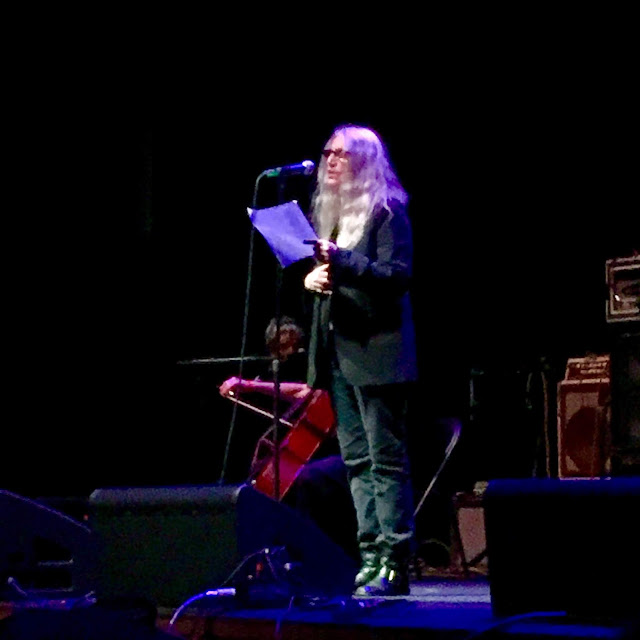 The evening at the lovely downtown Ace Hotel featured many action booths in the lobby, merch to support the cause, and drinks to sip while you mingled and talked about how bad we've screwed up this planet. Once seated, the show started with a video about what Pathway To Paris is about, and what they hope to accomplish. It reminded us that "Time is ticking - let's make change NOW." Because we actually don't have a choice. Patti Smith took the stage to well-deserved cheers, and I had chills from the outset. She recited a poem about the environment (beautifully backed on cello by Rebecca Foon), with a line perfectly describing the night - and the organization - "We arise to walk as one ... Nature gives us everything." The man seated next to me had his palms up and open, receiving, almost as if in prayer. I got it. I felt it too.

Jesse Paris Smith and Rebecca Foon came out to talk about Pathway To Paris, which they founded in 2014 after the Peoples' Climate March in New York City.  Their hope is that we can be using 100% renewable energy by 2040, emphasizing how urgent this crisis that affects us ALL really is. It always frustrates me when things are said like "By 2040" - that's over 20 years off. Why not NOW? Why not DEMAND it? I know it's all very complicated, but isn't our survival worth just changing it all NOW? Because it really is that serious - it's our basic SURVIVAL. They talked about the 1000 Cities Initiative, and getting cities to commit to renewable energy on their own, outside of this lousy administration. They told us about 350.org, who are working to reduce fossil fuel usage. But most of all, they inspired us. Imany ("All the way from Paris!") was a beautiful singer, who took her time getting on stage, and when she did, she said, "I'm sorry I was late, but I'm French." People laughed, knowingly, but gave her a pass, because Paris.  She did a cover of Whitney Houston's "I Wanna Dance With Somebody" and did her best to get people to sing along ("That was horrible. We're gonna do it again."). We did, and then Patti Smith came back on to introduce her friend, Flea.

Red Hot Chili Pepper's beloved bassist, Flea, took to the stage in a purple tie-dyed suit with a L.A. Lakers tee under it (Go Lakers!), and laid a typical funky Flea bass throw down on us, and also blew minds with his gorgeous trumpet playing. He's like a modern Miles Davis, for real. He shouted out to his daughter, Clara, who was celebrating her 30th birthday on this day. Flea is awesome. 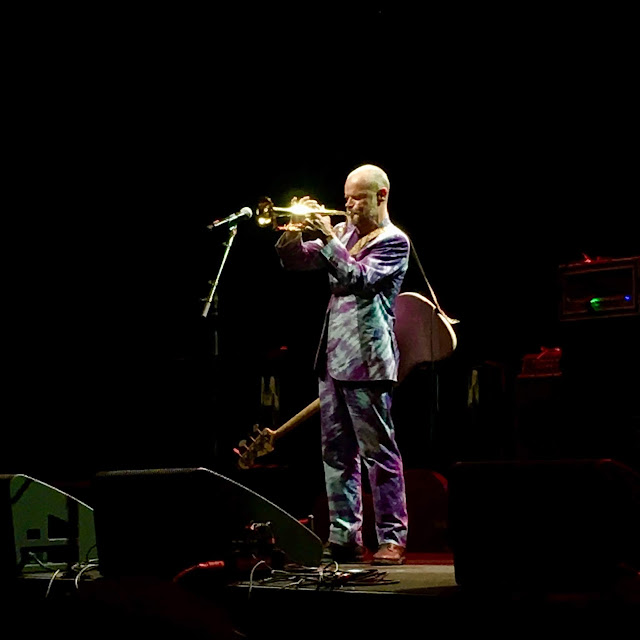 Pro skater, Tony Hawk, came out to talk about how he met Dhani Harrison when he was a little skater and invited them all back to his house (Castle) to hang out with him ...  and his Dad (George Harrison. Beatle.) and Tom Petty, and I think even Bob Dylan was there. 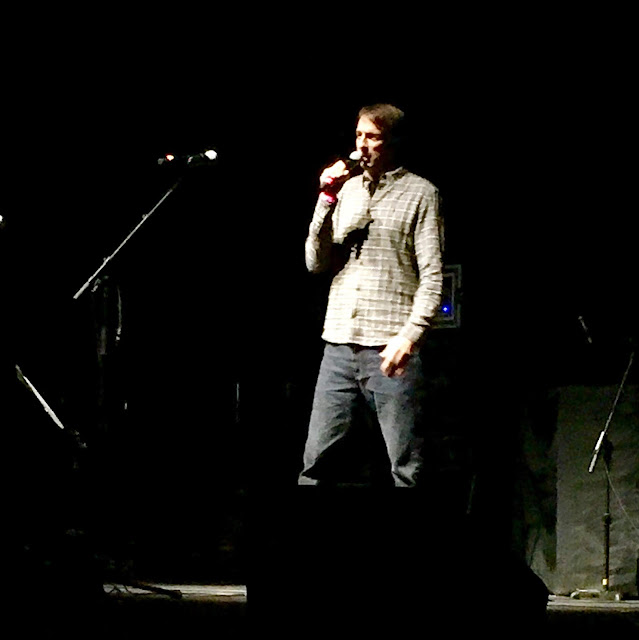 That cemented a friendship, and Hawk introduced Harrison, who played a song called "Press Pause", I think, that had never been played live before. My Morning Jacket's Jim James joined him for this lovely tune, and then stayed up there for his own "Over And Over". People were loving it, and his line, "If you don't speak up, we can't hear it" especially resonated for this night of music and charity.

350.Org's Bill McKibben showed video from his summer vacation, that was spent in Greenland watching giant ice shelves melt into the sea ... raising water levels with every crash. "We will keep doing this until we win," he said, and had us all write postcards to Gavin Newsom, our likely new Governor of California (which Tony Hawk skated down the aisle writing to demonstrate). All of this was happening while North Carolina was under siege from Hurricane Florence, illustrating climate change in real time. 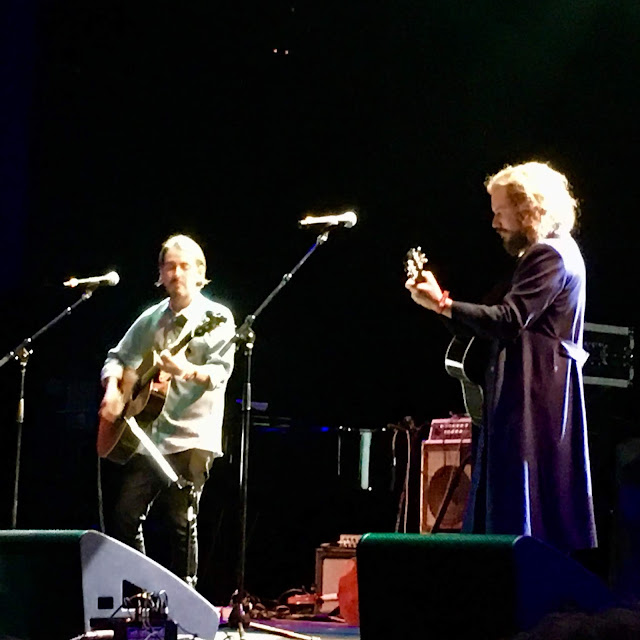 Jim James introduced Karen O. (Yeah Yeah Yeahs) who played a couple of numbers from the Where The Wild Things Are soundtrack that she did. "Worried Shoes" was lovely, but "Hideaway" seemed to my ears to be almost a direct ripoff of one of my very favorite tunes, Hendrix's "May This Be Love". Pretty, but I couldn't stop hearing Jimi. Still, happy that she was there in support of our world, and look forward to more of her original work. 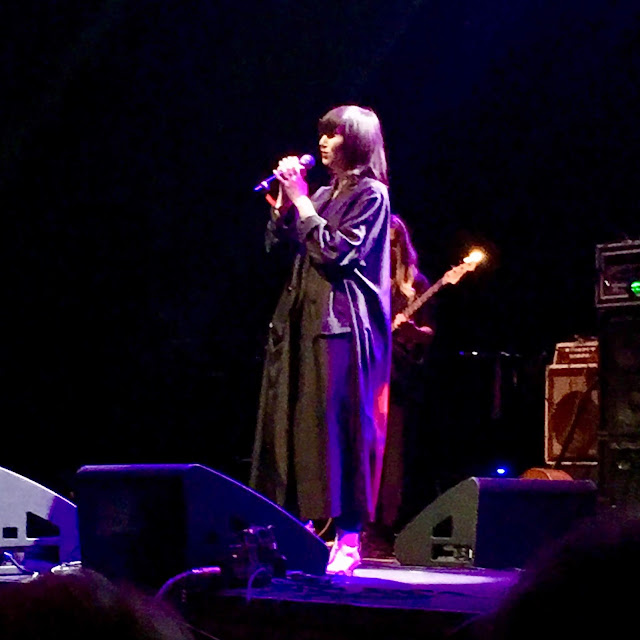 Tenzin Choegyal was there from Australia (via Tibet) and brought a letter from the Dalai Lama for Jesse Paris Smith to read to us, and it was as lovely as you'd expect. It mentioned that when you see photos of Earth from space, there are no borders, just one blue planet. "It's in our interest to look out for it." Choegyal played his native instrument (whose name I don't know), and to me it was the musical highlight of the entire marathon show. SO beautiful - and unique, sounding like nothing else (except for a little bit like Eddie Vedder on his Into The Wild soundtrack). It was truly stunning, and then he had us all stand and make roofs with our arms over our heads, as "Tibet is the roof of the world, and the roof is leaking." He played a song called "Snowline" - "about elegantly leaving fear behind." His passionate playing and singing left a deep impression on everyone there, and the next artist - LUCINDA WILLIAMS - admitted to being in tears side-stage while observing Choegyal. "I just stood there and wept."  As were we in our seats.

We only got one song from Williams, but it was a new one, featuring just her wonderful voice and guitar, singing that "We've come too far to turn around." And in the climate's case - we HAVE to keep going in our struggle to protect it. Patti Smith returned to introduce her friend, Eric Burdon from The Animals. He took the stage in dark sunglasses at night (o.k.) and said, "Give it up for the Smiths! Great vibes here tonight!" Everyone cheered in agreement, and Burdon showed himself to still be in fine voice when he belted out Lead Belly's "In The Pines" (made real famous by Nirvana), backed by a ripping guitarist. It was dramatic, and his "Mother Earth" was a bluesy number accented by some excellent trombone. Good stuff. 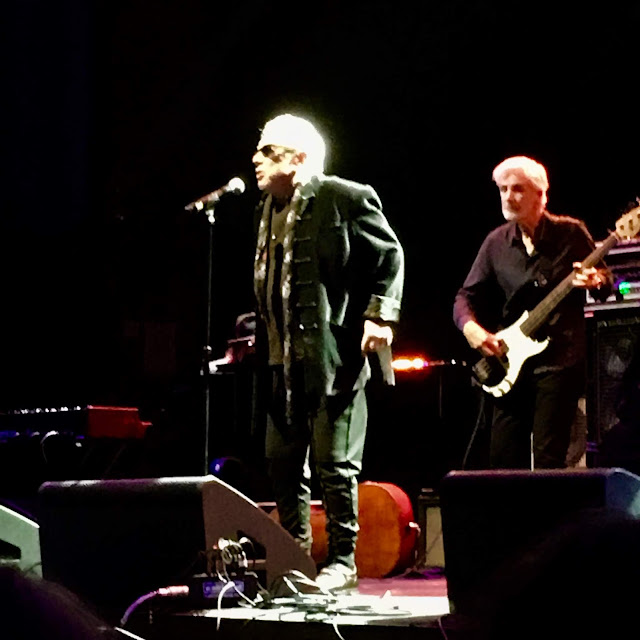 Talib Kweli was next, and after a bunch of "Wave your hands in the air like you just don't care!" and "Make some noise!" requests, he got down to a version of The Beatles' "Eleanor Rigby" done rap style. Another one had Nina Simone samples, and then that was that for his set. It was just o.k. to my ears. But then Tony Hawk came back up to tell how he came to know Patti Smith, which was that his skate company (Birdhouse) was doing a video and his skater, Clive Dixon, asked for his part to have Patti Smith music. She had given him a guitar pick, and after repeatedly trying a Nollie trick that had never been done ("NBD"), he held up that pick and then DID IT. Magic. So Hawk (and everyone else) loves Patti Smith, and he introduced her by saying, "Please welcome one of our greatest musicians, Patti Smith!"

Huge applause again, and then Smith cracked everyone up by saying, "Greatest musician? I can't play a fucking thing!" She dedicated her first number to North Carolina, and she (and Flea on backing bass) gave us "Peaceable Kingdom", which ends with the line, "Maybe someday we'll be strong enough to build it back again." We can only hope. The wonderful "Dancing Barefoot" was next, and Smith dedicated it to Flea's daughter, Clara, for her birthday. How cool. Smith ended her set with "Pissing In A River", and when she sang the line, "Don't turn your back now, I'm talking to you," she added, "Write those fucking letters!" Right on.

Jesse Paris Smith and Rebecca Foon returned to give their thanks to everyone there and involved, and urged everyone to continue taking action. They then asked all the performing artists back on stage for the All Star finale, which was her mother's "People Have The Power", and there couldn't have been a more fitting song for the night - and the world at large right now. Everyone was up there belting it out, and Smith shouted "Use Your Voice!!" to end the absolutely inspiring and spurring to action evening of Pathway To Paris. 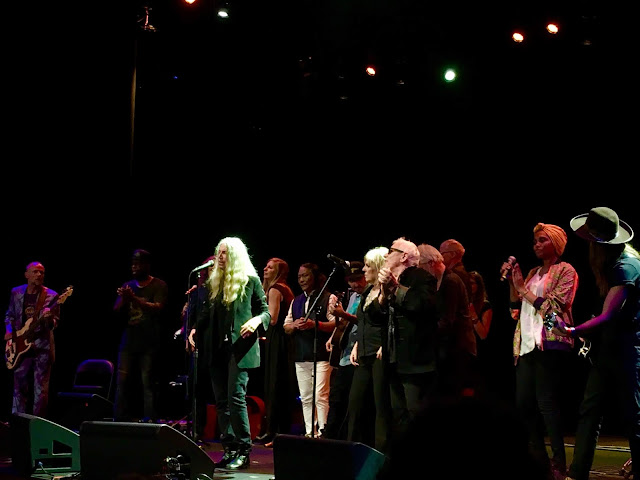 Please join their good work by writing your own letters, signing all the petitions, and CARING about your Mother Earth - it's the only one we have. Thank you.