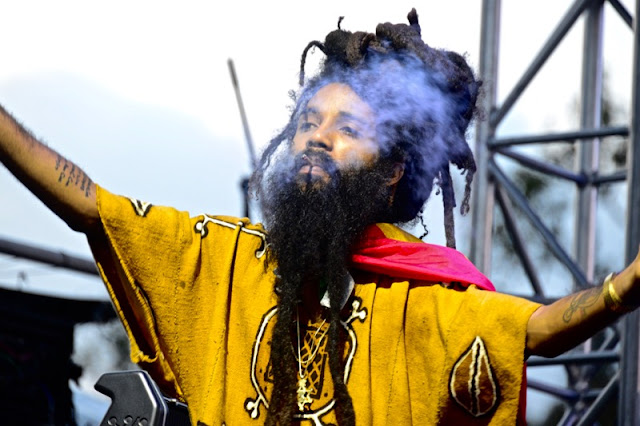 I have to be honest here, and say that after the Kaya Festival Day One found us getting back to Venice at almost 4 a.m., I was kind of surprised when my brother texted to say he was on his way to grab me for Day Two. Once I got over the shock, I found my rally cap and we were back on the road. Knowing what we knew now about the event held at the NOS Events Center in San Bernardino, we knew we needed a proper meal before getting there, and also made some other minor adjustments - like not carrying a heavy-ass bag all day. We looked up "Best Breakfast in San Bernardino" and came up with "Kountry Folks Family Restaurant". I don't believe in chains on road trips, and this place was definitely a trip. There were Bible verses everywhere, and families tucking into big plates of chicken and waffles. Yep. We were good (I subbed the waffle for the delicious cinnamon roll french toast - excellent decision). 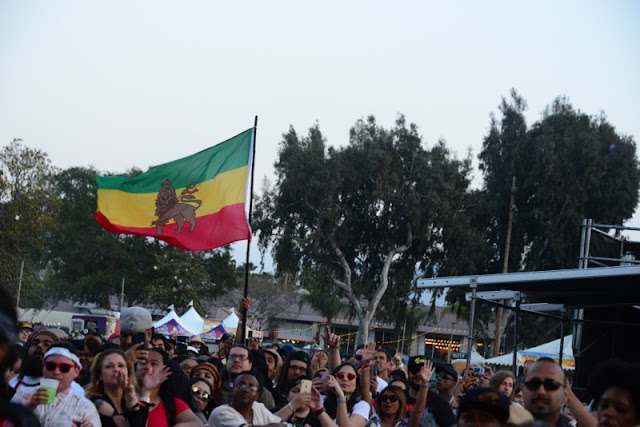 After getting as full as possible for another super long concert day, we headed over to the NOS, knowing we were even later than the day before - but at least we were there! The early bands we missed - and apologize to - were Jah Stix, Bambaata Marley (son of Ziggy, who I was told isn't reggae at all, but straight up hip hop, and now I'm bummed to have missed), Kabaka Pyramid, and most of Third World, who were playing as we rolled in. The good news was that the Festival was once again mega behind schedule, so we were in better shape than we had thought. De La Ghetto was the soundtrack in the background as we once again met up with the new Day One friends in the Irie Bird bus, comparing notes and getting caught up. I'm not sure who was playing at this point, but we heard an opera aria blasting, and it just elevated us all for a moment. A cool moment. 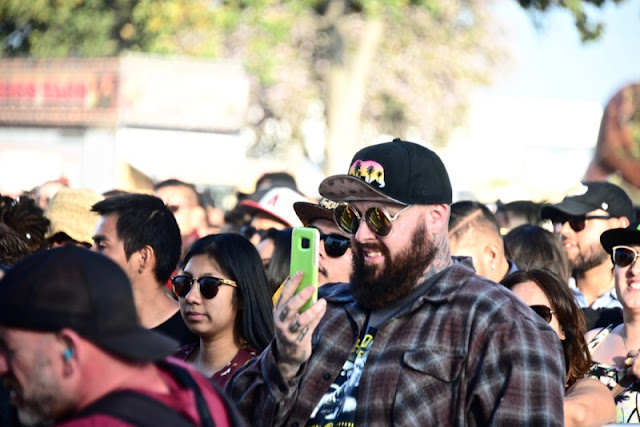 Zion Y Lennox were a reggaeton duo singing in Spanish, so I didn't know any of their songs, but they were all fun, celebratory jams that had everyone dancing in their colorful garb in the golden hour sunshine, feeling fine. They were from Puerto Rico, they had dancing girls in bright red outfits, and I dug them. That's the gist. 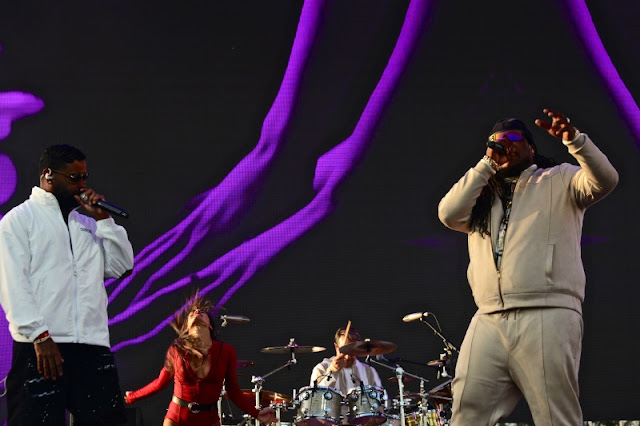 "Are you ready for Chronixx?!" This was asked no less than 10 times ... and dude still didn't come out. DJ Sway kept on asking, and Chronixx kept on lagging. It was good they were spinning classic Bob Marley tunes to keep everyone grooving, because it was getting ridiculous. "I don't want to wait in vain ... for Chronixx" was the new verse. FINALLY, "The voice of the future", Chronixx took the stage with a big Haile Selassie banner behind him. He has a rather feminine voice, I thought, and people were digging it, but I was kind of indifferent - as was he, it seemed. It was a sluggish performance, and it's probably because was stoned, which is probably why it took him so long to get his ass on stage. But it was cool, so was everyone else. Chronixx gave a JAH! Rastafari speech, and that set the tone for more Marley. 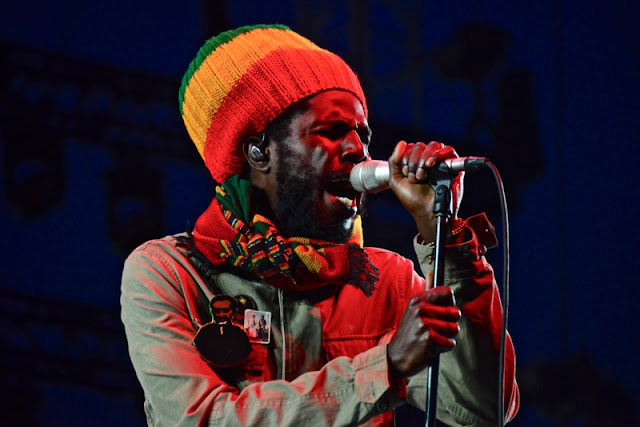 Stephen Marley - the organizer of the Kaya Festival - gave us a solo acoustic turn of the Kaya hits next, with a subtle opening of seated conga drumming to "Time Will Tell". This is my favorite, the traditional, the rootsy, the flag waver behind the son of Bob Marley singing one of his all time best tunes. It was sublime. "Excuse me while I light my spliff" ... which everyone did for "Easy Skanking", and you almost could close your eyes and imagine it was Bob, as I think Stephen sounds the most like him. 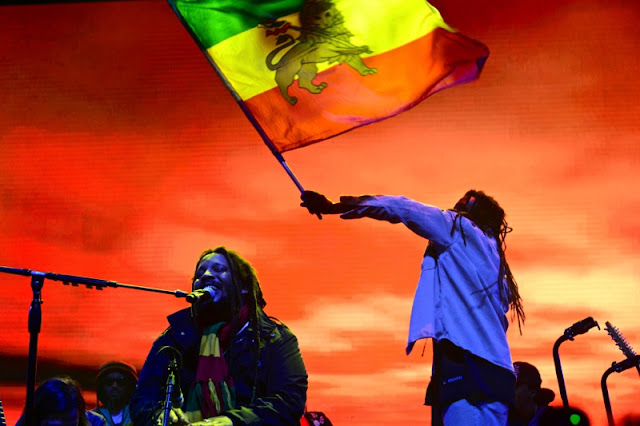 "She's Gone" was wonderful, and then Kymani Marley came out to join his brother for "Sun Is Shining", and then Julian Marley joined for "Running Away". No one could have loved it more, but then Stephen introduced "My youngest brother, Damian Marley" and the place again went insane. After playing "Kaya", Damian said, "We're here to celebrate kaya!" and then played his own "Medication" ABOUT kaya. All you saw in every direction were the widest smiles, and THAT is what this festival really is all about. Thank yous from the Marleys, and we were given another long break ... 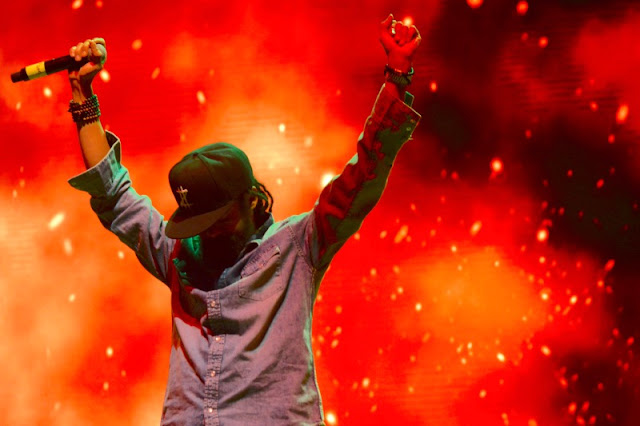 Until the mighty Cypress Hill took the stage! I had to get into the pit for this, and after all of the Marleys, of course, this was my favorite act of the weekend. B Real, Sen Dog, and Mixmaster Mike tore the place up, kicking it off with "I Wanna Get High". Festival appropriate, for real. B Real exhaled a big puff of smoke from an onstage j to let us all know that "Dr. Greenthumb" was in the house. 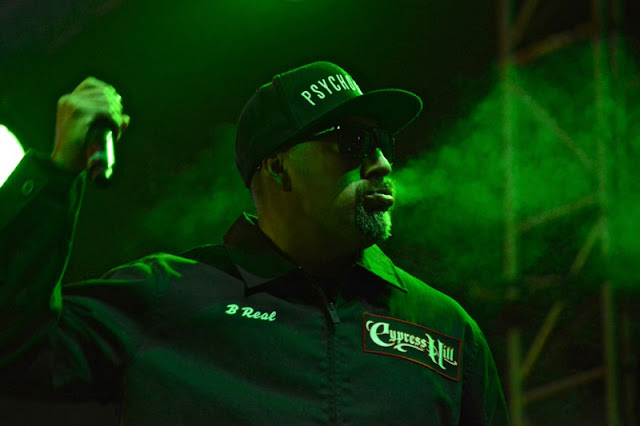 "Hits From The Bong" kept the hits coming (musical and weed), and when B Real (in fine form, I must say. Prophets Of Rage is keeping him sharp!) yelled, "Are you having fun at the Kaya Fest with godddamn Cypress Hill?!", he could be sure that everyone was, based on the roar that went up. "Hand On The Pump" killed it, and led right into "Shoot 'Em Up", and as I watched Sen Dog I recalled how about ten years ago to the day the guy saved me from a righteous hangover with one of his medicinal remedies when we were on the same tour together. Never forget. 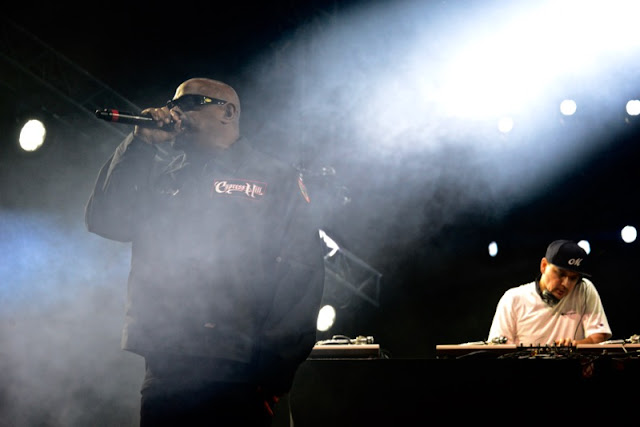 "The Phuncky Feel One" told me how B Real got the name for his Phunkcy Feel tips, and also showcased "Mixmaster motherfucking Mike!" Yeaaaaah. "We're gonna play this next one real aggressive", and play "Shots Go Off" aggressively they did. Phew. "Wanna do some Latino shit, Sen Dog?" asked B Real, and they did, but I don't know the name of that one. Lo Siento. "Rock Superstar" was classic and amazing, as is the fact that these dudes have been doing exactly this for over 20 years now. "We try to keep it hype in this bitch, alright?!" They sure did, when they hit us with the trifecta of "Kill A Man", "Ain't Going Out Like That", and "Insane In The Membrane" all at once! "Ain't no party like a West Coast party, 'cause a West Coast party don't stop!" It really did feel like it would never stop - and that we'd be more than o.k. with that. We all took a group photo with peace signs raised, and BAM. Cypress Hill was out of there, having taken no prisoners. 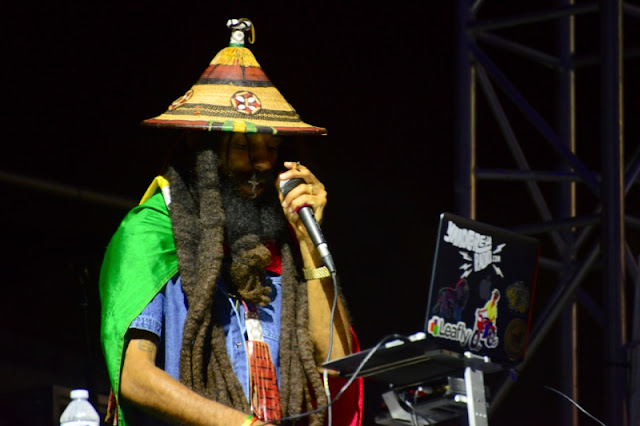 SOJA was up next, and though they're not really my thing, they are many peoples' thing, because there was a lot of singing along and female shrieking. The man next to me said, "OK ... It is what it is." I would have bet money that the white guy led reggae band with many members would have been from Colorado or Hawai'i, but it turned out to be D.C. Huh. Homie next to me said, "You gotta respect them just for playing. That's what this Festival is all about." He was right, and right when I was thinking that they should not have followed Cypress Hill (!), the singer said, "I went through high school listening to Cypress Hill! I had every t-shirt that there was!", so then I thought he was cooler. That's the thing about Festivals too, every act is someone's favorite. 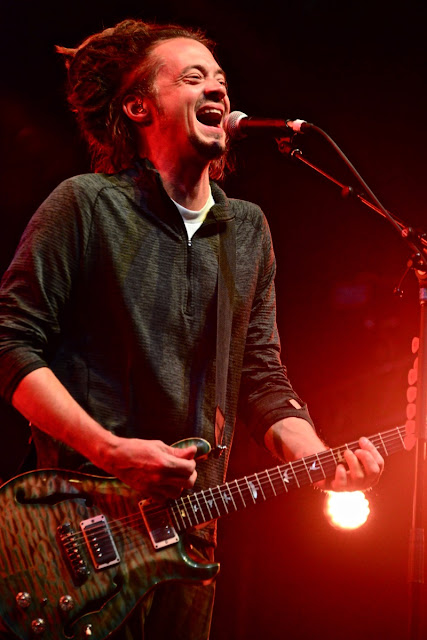 I heard so many people singing along every SOJA word, and overheard a woman saying that they were the only reason that she had made the trip, so there really was something for everyone, and everyone was happy. Until we had to literally wait over an hour for Lauryn Hill to take the stage. UGH. It was the 20th Anniversary of The Miseducation of Lauryn Hill, an album that meant SO much to me that it was really WHY we came back out for Day Two. Now we were all standing there, packed in, sore, exhausted, hungry, thirsty (everything had closed down as it was now well past 1:00 in the morning), listening to DJ dude yell "Are you ready for Ms. Lauryn Hill?!" even more times than he'd asked if we were ready for Chronixx. YES. WE WERE. It was outrageous, and you could tell the DJ and the crew were feeling the heat as people in the crowd were yelling "Let's GO!" over and over (in between singing along to "Three Little Birds" to calm our asses down). 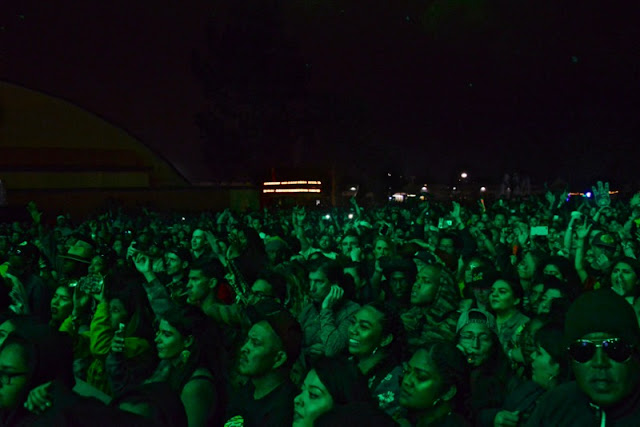 Ms. Hill must realize that the people that love and care about her seminal album the most probably have sitters and jobs and things to get back to on the next Monday morning that was fast approaching, and we were all still waiting for her in San Bernardino. "We apologize for the technical difficulties", said the DJ, but I'm pretty sure it was just diva stuff. It shortchanges the artist too, because now everyone was getting tired of it, and crabby, and when "Make some noise for Lauryn Hill!" was yelled for the 100th time without her showing, there was almost no noise left to make. "I can't hear you!" - yeah, because we're nearly dead. The band finally started intro music, that they kept having to repeat, to where we all really thought she wasn't going to show. Then, like a marvelous vision, Lauryn Hill (or we might have just been sleep-deprived hallucinating, but I'm pretty sure it was her)! 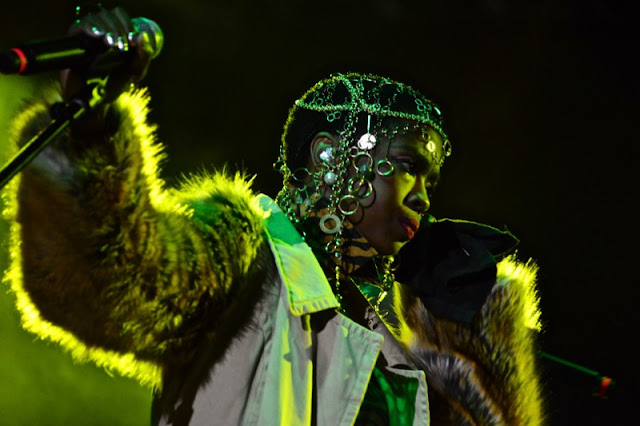 Clad in a long fur coat and a golden headdress, Ms. Hill came out to happy - and relieved - applause, and then said,"You're gonna have to bring the energy up!" Yeah, you're right, except that YOU are gonna have to do that, Lady. I love her, but I was pissed too. "Everything Is Everything" made sure that (almost) all was forgiven. It - and she - are still so so good. I gather that Hill is a bit of a control freak, based on her constant directing and giving orders ... the woman is IN. CHARGE. "Ex Factor" showed off a powerful woman in total command, and more gorgeous than ever. She was already dabbing sweat off of her face, so maybe the fur coat could have been tossed out to me to warm up in (San Bernardino gets freezing cold at night, we discovered). Anyway, her rapping was on laser point, and we all remembered just exactly why her album was such a monster hit. 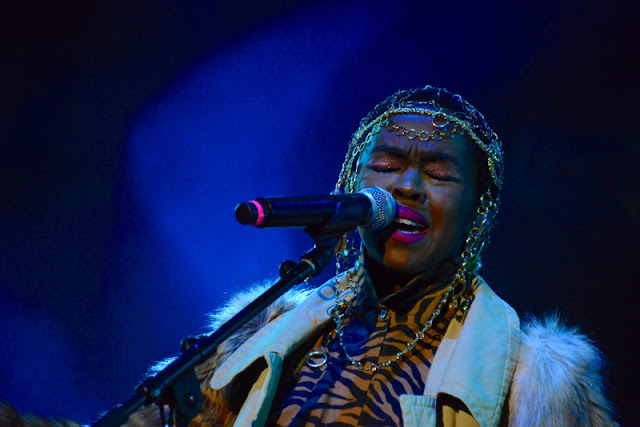 "You can get the money, you can get the power, but keep your eyes on the final hour!" "Final Hour" got us all sweating, and when they said, "Ms. Hill at Kaya Fest is real!" we finally believed it. "Lost Ones" is one of my all time favorite jams, and I just heard it live! I was rocking out on that one, and my brother came out of the photo pit and gestured "Let's go" (it was after 2 a.m. and brother had to work the next morning - AND still drive back to Venice!), I was o.k. to, because this was a high note for me. I can't stand to - and almost never do - leave early, because you never know what you'll miss, but I knew that Hill was taking her whole show on the road this Summer, so I can catch it when we're not beat down reggae festival zombies. 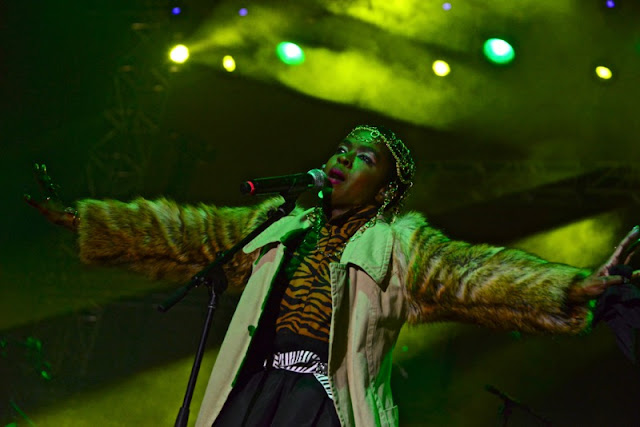 We walked back to the car singing. We drove back to Venice singing (mainly to stay awake and alive). I'm still singing now, with memories of a sunny weekend in sunny California with reggae lovers and a whole bunch of believers in One Love ... because that really IS what it's all about, and this weekend proved it once again.

*All photos by Paul Gronner Photography
**Reprinted from Juice Magazine.