I've been a big fan of Great Western Steak & Hoagie Company ever since I moved to Venice in the 90's, but that makes me a rookie, as they've been serving up their wonderful steak sandwiches on the corner of Lincoln and Superba since 1973.

The spot was actually a sandwich spot before that as well, run by Philly people that had relocated here, but THIS incarnation has been around since Richard Sohn took it over in 1973, and ran it for 25 years. One of his early workers, Sergio Perez, Sr., took over the business with a partner 20 years ago, and he now owns and operates this Venice institution with his son, Sergio Perez, Jr. Perez, Jr. was essentially born in the shop, and says it was "my after school, my detention, my suspension, my 'you're gonna come work and peel a sack of onions so you don't do that mistake again' job. Helping my Dad saved me. Growing up in Oakwood, lots of those friends are gone or in jail, but I learned to respect EVERYONE in the Community ... Black, white, and brown ... and you get it back." 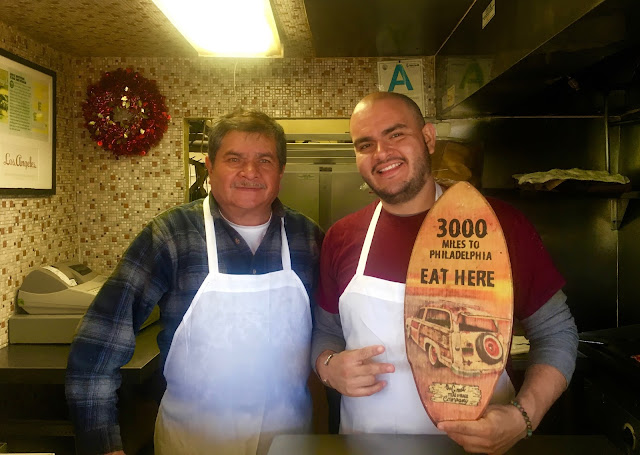 That sense of Community isn't felt as much these days, but Perez agrees that the "Heart and spirit is still here." The sidewalk in front of the shop used to have so many drug addicts and hookers cruising up and down, police thought they had a piece of it. You couldn't walk there after dark. He grew up having drive-by drills at Broadway Elementary during their lunch hours, so "you grew up knowing the dangers of Venice, but you didn't want to live anywhere else." Kind of like now.

The menu at "Hoagies" (as pretty much everyone calls it, and how they answer the phone) has never changed, and people would be mad if it did. They even got upset just when they changed the menu hanging inside! Change is hard, but it also speaks to how beloved a place it is.  Perez, Jr. told me, "You see things come and go, and it hurts, because you lose people. We don't get having $300 t-shirts on Lincoln, but you can come here and get a meal for under $10, and we're gonna keep doing it, because we're a staple."  They truly are. 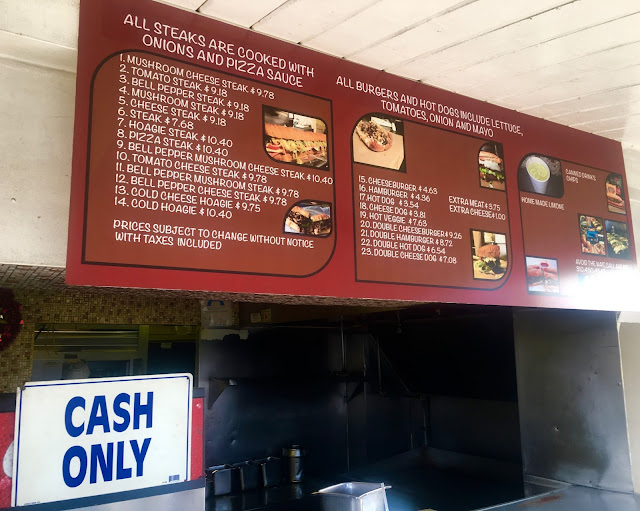 While Perez, Jr. and I sat outside at one of the outdoor tables at Hoagies and chatted, I could tell how much this place truly means to him and his family. He got on a roll, and I sat there, listening and nodding in full agreement, almost getting emotional.  He spoke enthusiastically and seriously, "We provide a service, we're here for you, we were a part of your growing up, and that's what we do it for. It hits your core when you grow up with something and it stays the same. Everything changes, but if ONE place stays the same, it lets you know that it will be o.k. ... . Nostalgic places are around for you to feel that way." We've all got ours. "In chains, you're just a number, but we have camaraderie. You can vent, reunite, catch up, GATHER ... It's important. And it's important to a lot of people."

NBA stars (Kobe, Robert Horry - my favorite, who would wait outside in his car for people to leave before coming in, so as not to make a fuss). Biggie Smalls' kids and wife, Faith Evans are regulars who live off of their sandwiches. Philly transplants (as the sign says, "It's 3,000 miles to Philly, eat here!"). Venice locals. Kids from Animo Venice ("We provide a sanctuary for them as they flirt with independence. It's that sacred walk between school and home."). Single parents, maybe not connecting with their kids, but they can sit down and relate over a cheesesteak, "and that's all that matters then." It's clearly more than just slanging sandwiches for this wonderful Venice family. And it is a legit family affair. They are there every single day, and they love it. Their history is right there on the ceiling for all to read. 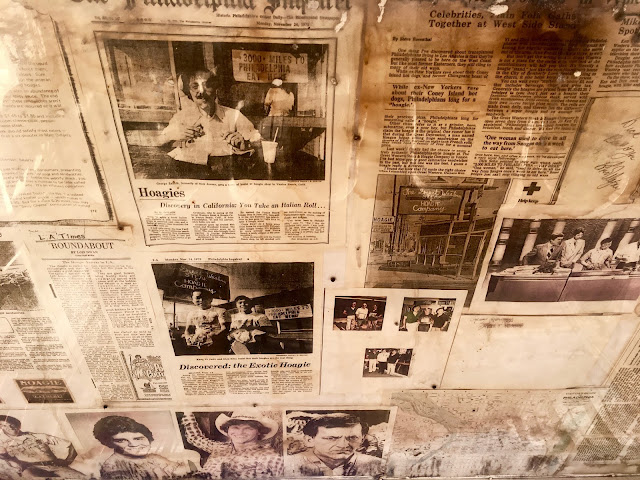 The Perez family doesn't own the land, but the Korean family who sold it to them does, and they love the place, so it looks to be safe, but if ever forced to move, they've got ideas. They could be in the new football stadium (They could be there - a second location - even without moving, Magic Johnson, give them a call!). They could be a food truck. They could move over to Hampton, closer to the beach. There are options, but we all know no one wants them to change. They get offers to buy the place every day, and they just tear them up. "It's not about money, it's about a fulfilling, meaningful life. I don't want to knock anyone else's hustle, but you can't know what it means to us. Like, you went to Hoagies, and now it's a good day." I love them. Perez, Jr. told me they're toying with the idea of having merch, like shirts and trucker hats, but "It would piss me off so much if I saw some fake hipster wearing one, so we haven't done it yet." Haaa. I get it  - and definitely want one.

As much as Hoagies gets from Venice, it also gives it all back. They sponsor a toy drive every Christmas, with bands and a party in the parking lot. They are involved with the Venice Car Club, with Perez, Sr. riding in a low-rider in the Cinco de Mayo parade, and donating gift certificates to the raffles. They want to utilize the parking lot space more for community events too (he's thinking something for the homeless that are their neighbors), so add Hoagies to your list of cool spots to host a shindig.

"In Venice, you grow up knowing 'crazy' is really just hard times, so you want to say hi, help them, feed them ... it's understood that they need help. Venice makes you aware of these things. You're more careful. It gives you a thicker skin. It's all we know and how we roll." And have been for 45 years. 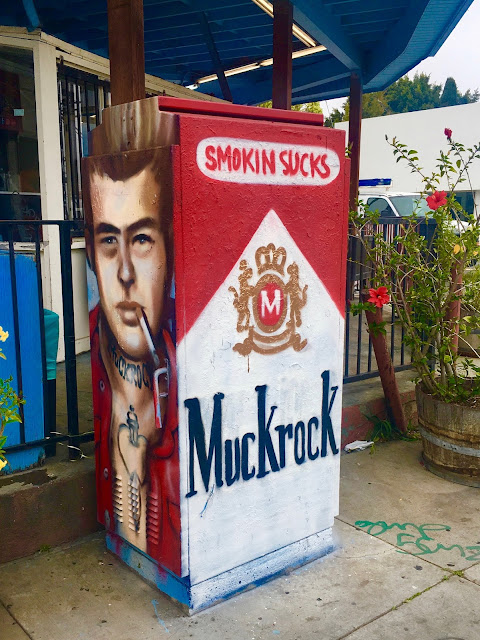 Cheesesteaks. Burgers. Hot dogs. Chips. Homemade lemonade. Sodas. That's it. But it's so much more. The murals on the walls are all by local artists. You will see locals at the tables. It's still cash only, but if you don't have cash and need to go across the street to get some, they'll put extra cheese on for you while you walk. The prices are weird, like $3.54 for a hot dog (dinner under $5!) and 7.63 for this one sandwich, but that's because they've gone up in increments since 1973.

"These aren't Philly Cheesesteaks, they're VENICE Cheesesteaks. Philly people say, 'You took me home today', but the vibes and feelings and the simplicity of knowing that you'll get what you want is Venice. We know how bad it can get, and we're aware of the tightrope walk between good and bad, but we're here for you. The whole spirit of Venice unites, binds us to do better together, so that EVERYONE can rise, and all of us are up there!" That really is the spirit, and it does not go unnoticed by locals. During the Superbowl this year, Hoagies had to close down because they ran out of all their supplies, even though they had ordered way extra. During the World Series Game 7, I walked to Hoagies, and while every t.v. in town was tuned in to the game as I passed by, the phone was ringing off the hook at Hoagies, where they were listening on the radio. They're simply a part of our lives here in Venice, and we're so lucky to have them. 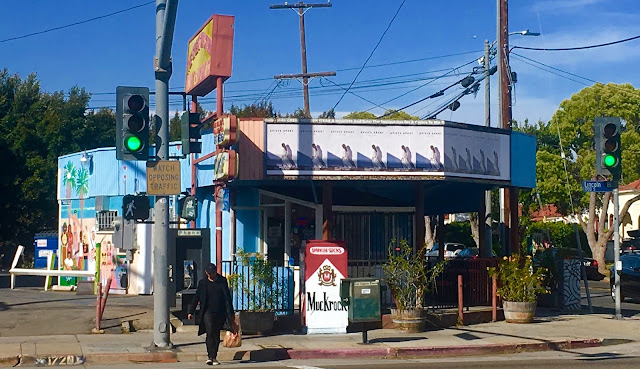 They feel lucky too. Perez, Jr. loves the skatepark. "Every single sunset I go down there and say thank you to the sun, and welcome to the moon." He likes La Fiesta Brava and Casablanca and the Indian place at the beach, but really, "The sunset in Venice is where I like to be." Me too, brother.

Even running the same ad in the Beachhead since the early days, Great Western Steak & Hoagie Company has been a solid mainstay for Venice every day they've been open. Stop in, say hi, eat a great, affordable meal, and say thanks. This is the kind of joint that keeps Venice real.