Rock The Night - Jakob Dylan, Jim James, And Butch Walker Rock For A Cause

The Teragram Ballroom hosted a rock show to benefit finding a cure for Crohn's and Colitis, issues that 1.6 million Americans suffer from. The disease is such a bummer, that it's good to have an awesome night out in honor of all of the people that it affects - and that we did. 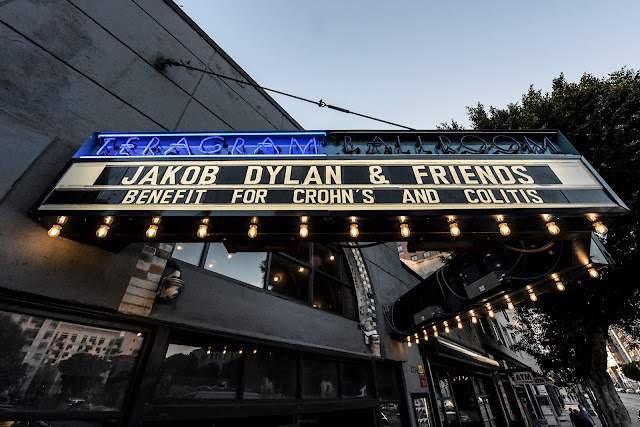 The festivities kicked off with a silent auction - and open bar - that got folks milling around and connecting right from the start. They had all sorts of cool things, from weekends at posh resorts to a signed Lakers basketball. There were a whole bunch of speeches, and a video explaining it all. Stacy Dylan spearheads the event every year, which is how you get Jakob Dylan to headline it every year. Stacy's son and Jakob's nephew (Bob's grandson), Lowell, suffers from the disease, and this show was for him and all the other people that share this affliction. And good people coming together to do good things with rock and roll is my favorite thing, so I was there. 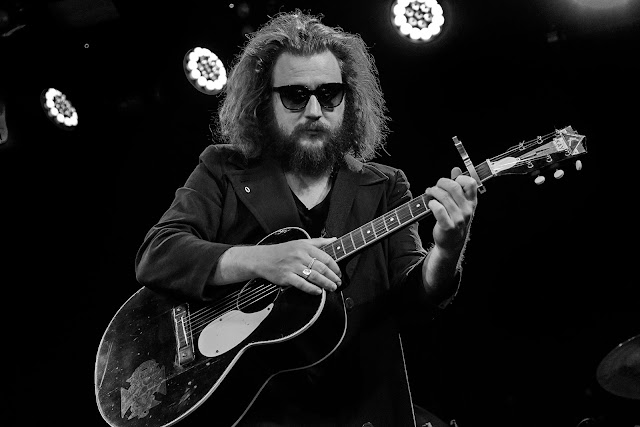 The musical portion of the evening opened up with My Morning Jacket frontman Jim James and his gorgeous tunes. He's awesome. He kicked it off with the fantastic "I'm Amazed", and it's just as good solo as it is with MMJ. We also got "Throwback (When We Were Young)", also beautiful and with his nice crop of hair back-lit with the colorful lights, it was as good throwback to real Zeppelin-type rock vibes, for real. 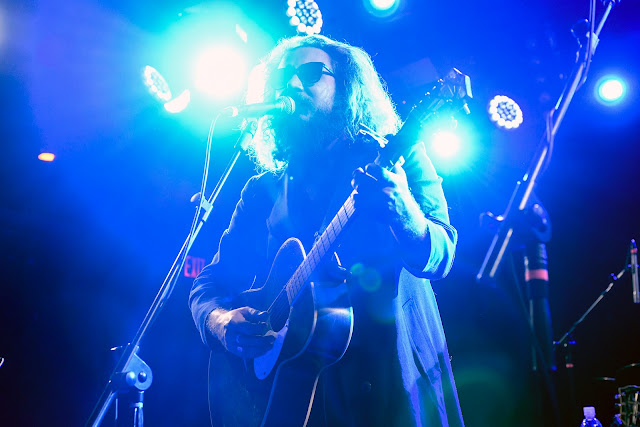 To be honest, I was also talking to a bunch of folks during the James set, as I got there a little late and really wanted to learn more about the disability that we were there for. I learned that former Laker, Larry Nance, Jr. suffered from Crohn's, and would often visit kids in the hospital also dealing with it. It's kind of incredible that he could play at such an elite level while also having his stomach tied up in knots, but there is medication now that really helps, and that's what we were there for - help, and a cure.  Jim James ended his set with a Yim Yames tune, "Changing World", where the chorus goes, "Change the ways of this changing world" .... which is also what we were there for. 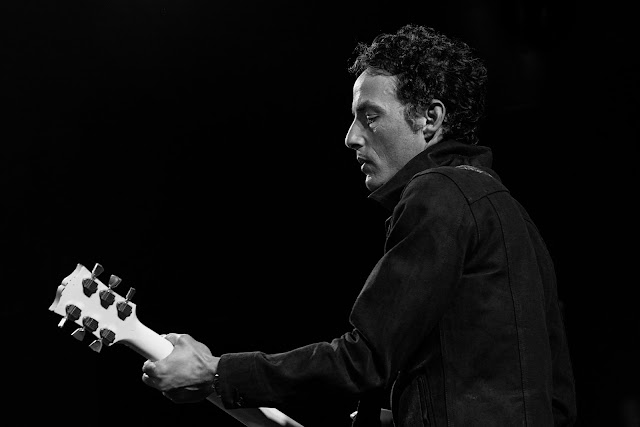 The wonderful Jakob Dylan was on next, and as excellent as expected. It's funny, it was the ten year anniversary of the Justice Tour launching (a series of shows put on by Tom Morello to benefit different charities in each city we visited), and I had met Dylan at our New York show for Road Recovery. We talked about it after the show, and he remembered playing a pink guitar for "He's Got The Whole World In His Hands" - that also featured Slash! Probably the rockingest time that Sunday School classic has ever been played. Great memories, but we were there to make more, and Dylan playing his "Three Marlenas" will definitely suffice as one. It was the first Coachella weekend, and Dylan said, "Thank you all for being here and not at Coachella. All of that money went to garbage stuff, so thank you for being here!" Agreed. 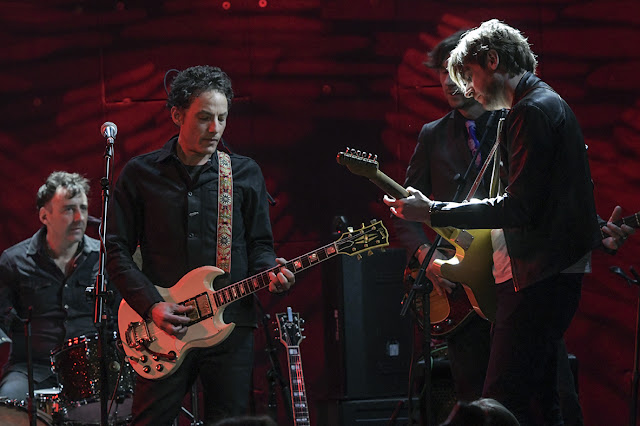 "God Don't Make Lonely Girls" was up next, and The Wallflowers jam was extra warmly received. Because Dylan and his band are awesome. Dylan said, "The next one is a song that if you knew it, and you had a gig, you'd play it on a Saturday night too.", and we got Sam Cooke's "Another Saturday Night". The whole place was up and dancing, and full of the stoke that comes from the communal singing and dancing that goes down at a fantastic live show - AND for a good cause! Guitars were extra shredded on that one, prompting Dylan to say, "Stanton Edward is playing so good tonight we have to introduce him!" Again, agreed. 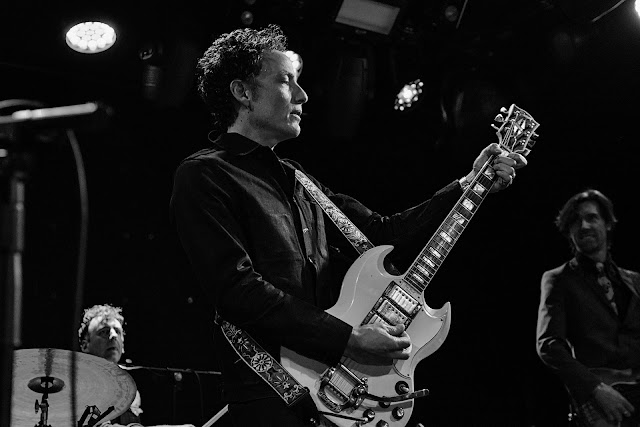 The big Wallflowers hit, "One Headlight" was next, and my friend next to me told me that he'd heard that Bruce Springsteen said he'd wished he'd written this one. Mighty fine compliment for a mighty fine - and now classic - tune. It was great. As was the Dylan set closer, "The Letter", a cover of The Box Tops oldie. People didn't want Dylan to leave, but it was now time for Butch Walker. 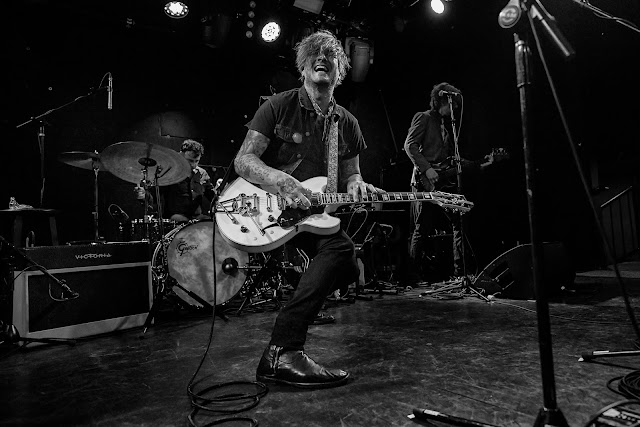 The Awesome Butch Walker. I was friends with him back in the MySpace days, and hadn't really seen or heard him since, so this was a real treat. I'm not super familiar with his discography (yet!), but this show made me want to run out and get every last thing he's ever played on. I don't know the name of his opening song, but after it, Walker cracked, "This next song is also not 'One Headlight'". Well, it didn't need to be, because it was also mighty fine - all on its own. "Wilder In The Heart" was next and had great lyrics like, "I heard you talking in your sleep in English, even though it ain't your native tongue, I see you still got your sense of humor, left over from when you were fun." Nice!

I think the next jam was called "Bed On Fire", and by now the place was seriously rocking. At first I was wondering why Butch Walker was headlining, but at this point, I totally got it. He is, again, awesome. As is his band. I wrote in my notes, "How is Butch Walker not huger?!" underlined several times, and I ask it again now. HOW?! Maybe to that point, after that barn burner, Walker said, "We've officially gone 15 minutes without talking about Ed Sheeran. Want another song?" Yes. Yes, we did. He than cracked, "That was from Page 14 in the Audience Baiting handbook. And I don't have a tech. This is a benefit. We tech for ourselves," by way of explaining the pause for tuning. I love him. 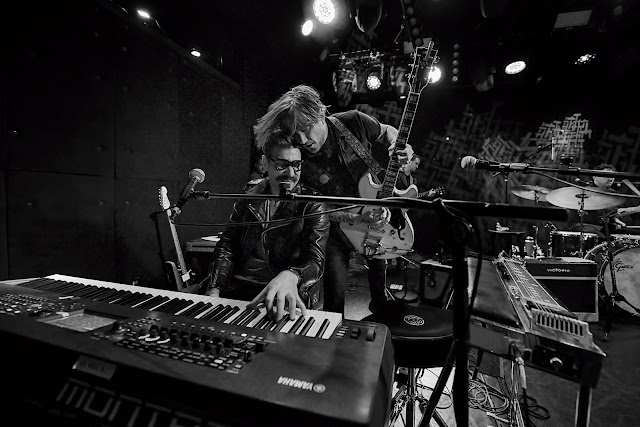 Another great song whose name I don't know merged into "Teenage Wasteland (Baba O'Riley)", and that was so good that Dylan re-joined him on the stage to duet on Walker's "Closest Thing To You I'm Gonna Find" and it was just .... !!! All the guys were literally bending over backwards, giving their ALL to the rock. We all went crazy, and Dylan said, "I just felt like Petty in that Prince moment ... that's what that felt like." (referring to the Rock Hall of Fame gig when Prince's guitar did NOT gently weep, but nearly set the joint on fire with its fury). Walker replied, "Except I didn't smirk the whole time." Haaa. (*Editor note: Prince deserved every smirk he gave.) It really was just about that good. 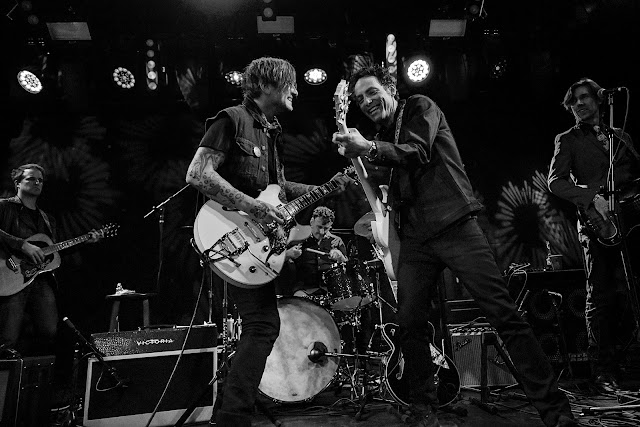 "(What's So Funny 'Bout) Peace, Love & Understanding" was the Elvis Costello cover Walker and Dylan sang together for the evening's finale, and it both asked the question, and gave us the answer. There's nothing funny about any of it, and we were all there for all of it. The music was pure peace and love (and ROCK FURY!), and I think we all now had a better understanding of this medical situation that so many people live with but don't really talk about. Again, these are the kind of musical events I love best, and you always leave feeling a little better about the state of the whole world. 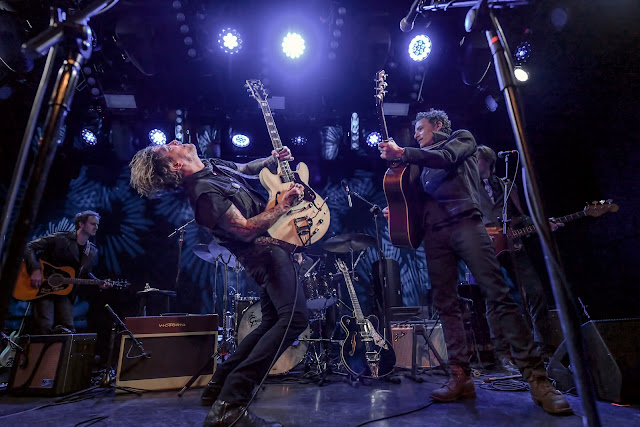 The Night was indeed Rocked, and money and awareness for Crohn's and Colitis was raised as we all Connected For A Cure.

Thank you to all involved!


*All photos courtesy of Rodney Bursiel