An Evening With Ben Harper & Charlie Musselwhite At The Grammy Museum

The second collaboration between Ben Harper and Charlie Musselwhite (after their Grammy winning debut, Get Up!), is out today, and there was a performance and conversation Wednesday evening with the two bluesmen at The Grammy Museum to celebrate their brand new album,  No Mercy In This Land.

It was the eve of the new John Lee Hooker Centennial exhibit opening at The Grammy Museum, which was fitting, as Hooker was the one who introduced Harper to Musselwhite, and a good portion of the interview was spent discussing the legendary Mr. Hooker. I was fortunate enough to be seated next to Hooker's daughter, Zakiya ("Z"), who told me that she would be performing herself the following night at the opening. Grammy Museum Executive Director, Scott Goldman, hosted and moderated the event, and introduced Harper and Musselwhite, who came out to a warm reception, and in turn introduced their backing band - Jason Mozersky on guitar, Jesse Ingalls on bass, and Jimmy Paxson on drums. Harper explained that "The way we made this album was the same as in a circle like this, just in a different room," and they dug right into the opening and title track, "No Mercy In This Land." It's a swampy, traditional blues number that finds Harper and Musselwhite sharing vocal verses and trading licks on their guitar and harmonica respectively. The intimate audience loved it, and Musselwhite cracked, "Don't forget that we have a million dollar dance floor down here!", indicating the tiny space in front of the stage, but found no takers.

"I Found The One" was more fun, an upbeat one with old school rock and roll riffs (derived straight from the blues) and rim shot drums, on which Musselwhite's harp really shone. He is THE master of harmonica, and after its tight ending, the room erupted in applause. The next one found Harper sitting down with his trademark Weissenborn, which garnered its own applause just for being taken out (Grammy Museum events in the Clive Davis Theater tend to bring out the real music aficionados). "I know better than to not check in with my Captain before lift-off," cracked Harper to explain the tune discussion that happened before they got down with "The Bottle Wins Again". This one is a real toe-tapper, for real. I looked around at my immediate area, and every single foot I could see was tapping away - mine included. "Broken hearts and broken dreams, turns out they weigh the same" is an example of the blues Harper must have had while writing this one, and his lap steel wailed away right into another tight ending. It's great stuff. They're not really breaking any new blues ground, but they are certainly shoring up the blues foundation, making sure it lasts beyond their generations. 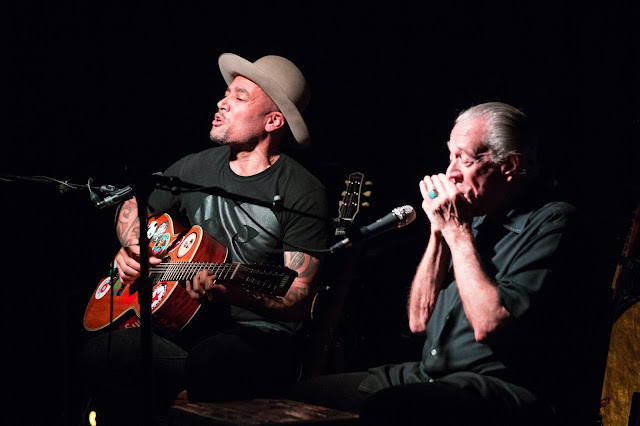 "Nothing At All" found Harper at the piano, and it was my favorite tune of the evening. A slow, dramatic number full of the minor notes that are a weakness of mine. It featured a subtle and sensuous harmonica solo from Musselwhite, and this one was the standout for me. Sure, because it's beautiful, but mainly because it sounds different than the typical 1/4/5 chord changes that traditional blues is known for.

When the clapping died down, it was time for the interview portion of the evening. Goldman brought up the fact that the Hooker exhibition was opening the next night, and that Musselwhite heard Harper opening up for Hooker in 1993, and said of that night, "I heard the blues in Ben's guitar playing, and that got my attention. We met good." Harper said of Hooker, "What comes to mind about his music was the deepest ease. And his grace - he gave me an opening gig before my first album had even come out." Musselwhite added, "I learned from John Lee that you get your money up front!" - to much laughter. Musselwhite is a pretty funny cat, cracking up the audience the whole time. 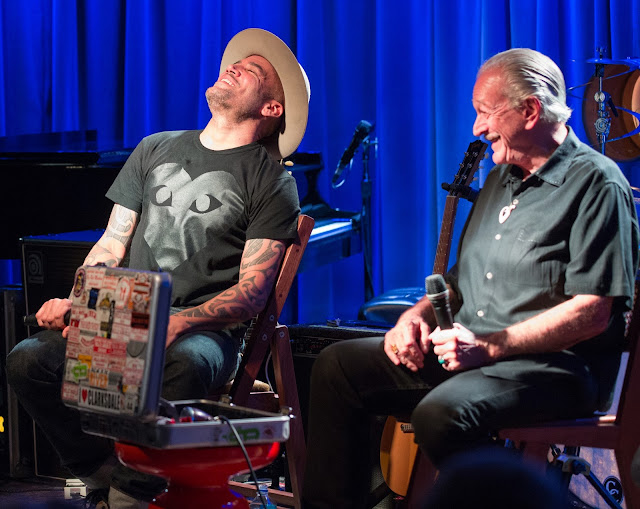 The obvious good friends talked of how their music deepened by being on the road together to promote Get Up!, and how their shared collective musical information made this new album even more possible - and necessary. "Charlie makes me exceed myself. He pushes me to go places I could not go myself," explained Harper, with tangible admiration for his friend and mentor. He added, "Charlie's harmonica steeps the music deep into the ground AND gives it flight. We're not re-inventing the blues, we're re-invigorating the blues. The blues has to shape-shift to stay vital."

Musselwhite returned the admiration, saying, "This relationship works because we're kindred souls, searchers, and lifelong learners seeking the heart of things." - and the music shows this off, absolutely. Harper's mother, Ellen Chase-Verdries, was in the audience, and Harper shared stories about the making of their own collaboration, Childhood Home, and about how he used to trash her records by playing them to death. He finally got his own turntable and records "The little white Radio Shack one, remember, Mom?", and soon was listening to Hendrix ("Probably because we had matching afros, I had no business liking Jimi at 8 years old!) and The Who. He shared an anecdote about his mother coming home from work one day to find that a very young Ben had decorated his white bedroom walls - in Sharpie - with an entire The Who concert drawing covering three walls. She just shook her head and walked out. Kids.

Musselwhite was also an avid record collector of every genre imaginable ("Flamenco is some bluesy stuff!"). He joked that "'My baby left me' is a worldwide phenomenon - or 'She came back and it was worse'." Everyone laughed at that one. Haha. Harper added that he will say to Musselwhite something like "Have you heard the Furry Lewis song 'Turn My Money Green'?" and Musselwhite would answer, "Oh, I KNEW Furry Lewis." As a nod to his own wide appeal, Harper humble-boasted, "I promise you, I'm the only human being that has opened for Pearl Jam AND John Lee Hooker." He's probably right.

The majority of No Mercy In This Land was recorded live, and Harper explained that after being asked "When are you going to work with Charlie again?" in every language around the world, this record had to happen, and "I want to work with Charlie as much as I can from here forward." Watching them play together - and crack each other up constantly - you can see why. Goldman asked, "Is there more to come?" to which Musselwhite drolly replied, "Well, this one isn't even out yet ...", earning more laughter (but it IS out now!). Harper spoke to how he comes up with songs, mocking himself by saying "I'm just channeling - shut the fuck up - don't act like you know songwriting ... but silence doesn't make a good interview." After a decades-long and successful career, I think it could be time for him to hang up the faux-humility, as you probably DO know songwriting if, as he said, he's opened for both Pearl Jam and Hooker. Just saying.

When Goldman asked Musselwhite why he chose the harmonica, he answered, "It's the only instrument that you can't see what you're doing. It has a voice-like quality, and I feel like I'm singing without words, breathing the music." He talked about hanging out in Chicago ("Coming from Memphis, I already knew how to drink!") and watching Muddy Waters. A waitress (whom he may or may not have had a thing with) told Waters to check him out, and from then on he would be asked to sit in with "Mud" whenever he was in the audience, "And that was my ticket out of the factory!" Goldman followed up by asking, "What makes a deep player?" to which Musselwhite retorted, "That's a question that if you have to ask it, you probably won't get it." Burn. He quickly added, "Deep blues has the most feeling. It comforts you." After being kind of dissed, Goldman turned to the audience to see if anyone had better questions. One lady asked Musselwhite if he was familiar with Turkish blues - and of course, he was. Zakiya Hooker stood up and greeted her Dad's old friend, Charlie, and invited them to the Hoooker exhibition, and the respect given her from both was clear. As I was next to her, I raised my hand and asked that since they both have talked a lot about who inspired them and gave them their shots, was there an up and coming musician that they would like to inspire or give a shot to? Harper replied, "I paid mine forward permanently with Jack Johnson.", revealing uncharacteristic maybe jealousy and for sure selfishness (alluding to the fact that he initially gave Johnson a boost, and has been surpassed by Johnson in both sales and fame). I was rather taken aback, as Harper is usually known for his activism and helpfulness, but maybe that was a younger Harper's unjaded idealism. Regardless, he is where he is in a great place today, affirming that and concluding by saying that "My Grammys are cherished like nothing else." 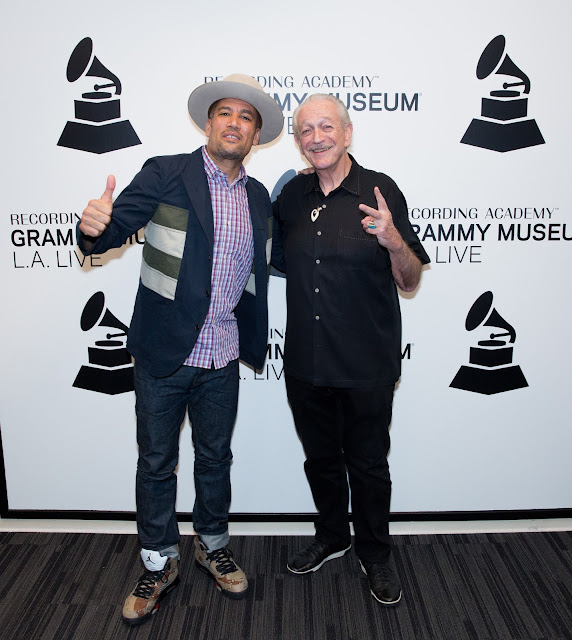 The duo returned to their instruments for an unaccompanied version of "Trust You To Dig My Grave", where just when you think it's about the trust that these two clearly have for each other, Harper sings about "Don't want to be your first lover, I want to be your last", implying a different kind of relationship being sung about. Whoever it's about, it's good, and the friends and musical partners gave each other a big thumbs up at its conclusion. I give No Mercy In This Land a big thumbs up, and this insightful evening of music and conversation at The Grammy Museum gets BOTH thumbs way up. Any chance you get to attend ANY program at The Grammy Museum should be taken, as you always come away from it feeling more knowledgeable, and grateful that music programs such as theirs continue to exist in this crazy world. Perhaps there maybe IS a little mercy in this land after all.

Thank you to the wonderful Grammy Museum for all that they do, and to Ben Harper and Charlie Musselwhite for giving us the blues - in a good way.

*Photos courtesy of Alison Buck/Wireimage.com for The Grammy Museum