Conversations With Bootsy Collins At The Miracle!

William "Bootsy" Collins is the best. What a happy, kind, positive spirit this funk legend is, and we got to hear all about him and his life in his conversation with UCLA professor, Dr. Scot Brown, held at the fantastic Miracle Theater in Inglewood last Friday night. 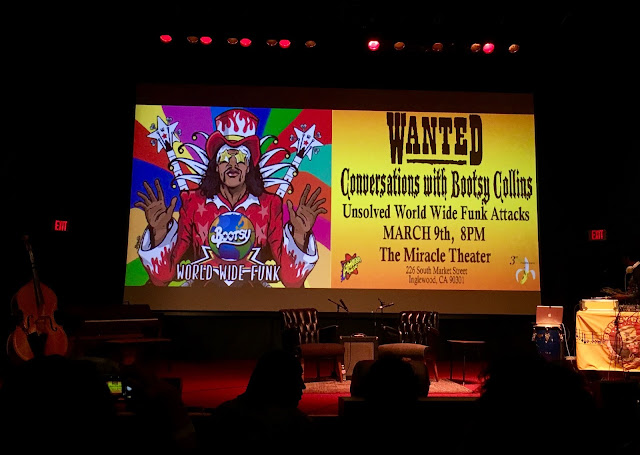 Collins was there to discuss his new album, World Wide Funk, as well as to promote his Bootsy Collins Foundation, whose mission statement is "To inspire, educate, and enrich the lives of individuals from all backgrounds", and he did all of that in a single evening at the Miracle. 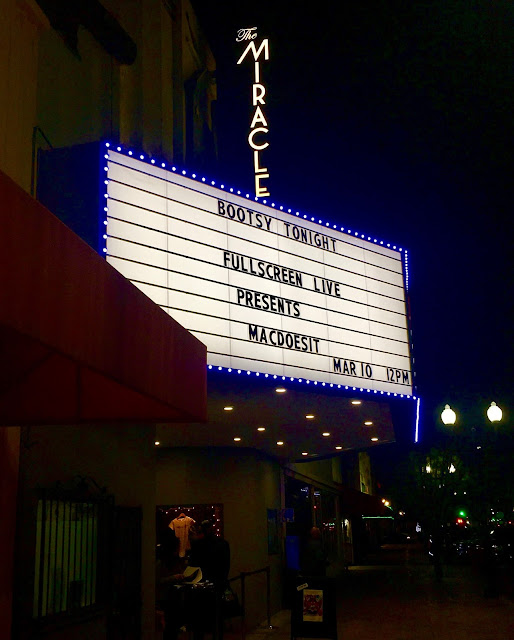 There was a meet and greet held before the actual sit-down with Dr. Brown, and when I was introduced to Mr. Bootsy Collins (!), I got unexpectedly emotional out of the blue, and almost cried. You see, I first ever heard of Collins and the Parliament Funkadelic because of Prince, who would always shout out to Bootsy and the P-Funk as major inspirations of his, and you can for sure hear it in his and the "Minneapolis Sound". Prince even inducted them into the Rock and Roll Hall of Fame, with proper respect and admiration. Collins seemed to understand the moment I simply said, "Prince", and we shared an embrace over the immense loss of Prince - but also over the joy of the moment in being there to celebrate the music, because we still can. It was special. 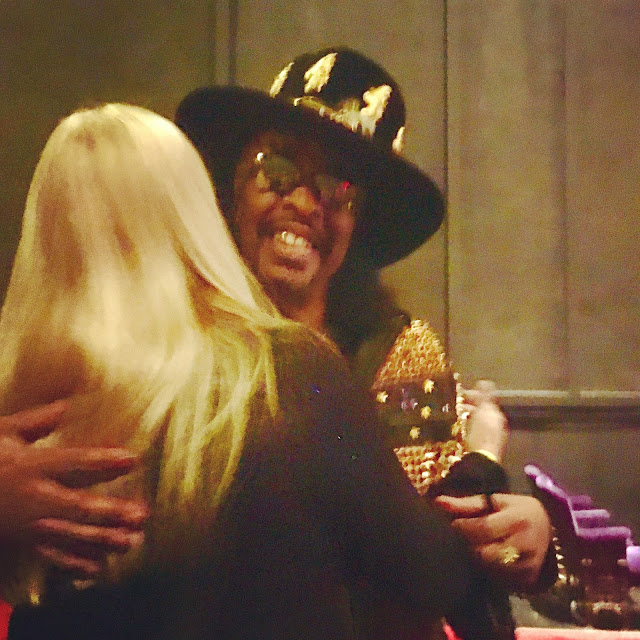 My friend K.C. Mancebo had organize the event, and when she took the stage to introduce Collins, Brown, and DJ Lance Rock (of Yo Gabba Gabba! fame, who spun the Pure Funk throughout), it was to a rowdy and excited crowd of superfans who were FEELING it. Brown came out and spoke to how influential funk is on all music ("When people reach for samples, they go back to funk."), and then, "Without further ado, Bootzilla, Zillatron, Casper, The Player of the Year, Bootsy Collins!" Collins came out on stage to chants of "Bootsy!", clad in his black and gold rhinestone spiked get-up, with trademark top hat and star-shaped sunglasses. He cupped his ear to take in the chants, smiling big all the while. He loves it, we love him. 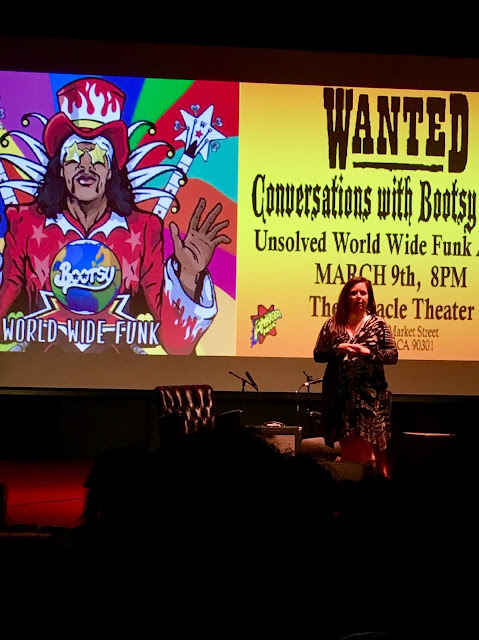 Brown spoke to how funk has progressed, and Collins answered that back in the day, "You couldn't say 'Funk' on the radio ... now you'll get arrested if you DON'T say Funk!" He went on to say, "Funk says come as you are, we accept you, we encourage you, we embrace you. Anyone who wants to have some funking fun, bring your rump to the funk!" It's all just so fun, it's irresistible. Patti Collins, Bootsy's wife, was there too, in all her regal beauty, and also to promote her "Peppermint Patti's Grooveminte Girls" organization. Having fun AND doing good for the community is the best. 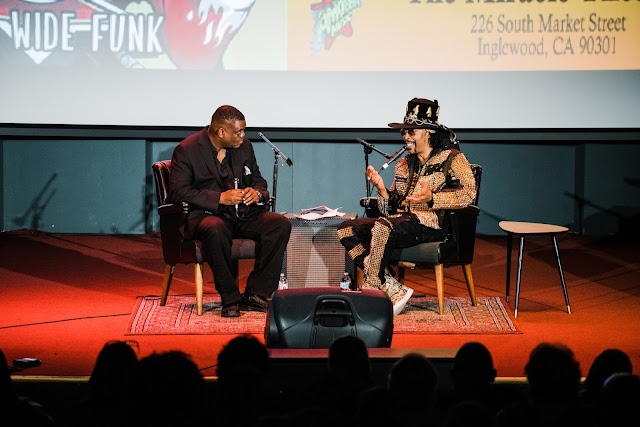 Starting out playing with James Brown is a pretty darn good musical education, and Collins told us that "James Brown taught us the ABC's, he taught us the ONE. All number after that are just numbers... "Love has gotta be there. LOVE is the ONE." After Brown, Collins took up with George Clinton and the Parliament Funkadelic, and then took off on his own with Bootsy's Rubber Band, with great stories for every era. Like how on a song called "Munchies For Your Love", "These were my personal experiences ... I always had my own stash." 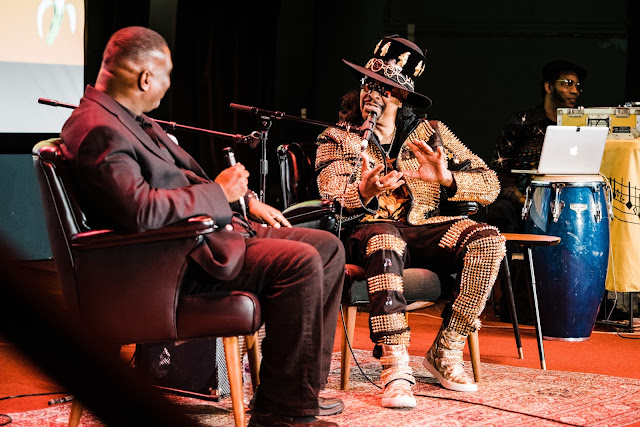 In between awesome statements like "You can't funk with the Funk!" and "You never know how the funk is gonna creep up on you", Collins spoke about how important it is to him that every kid has an instrument, and he's seeing to that through his "Say It Loud" program. This cat just kept getting cooler and cooler the more he spoke. 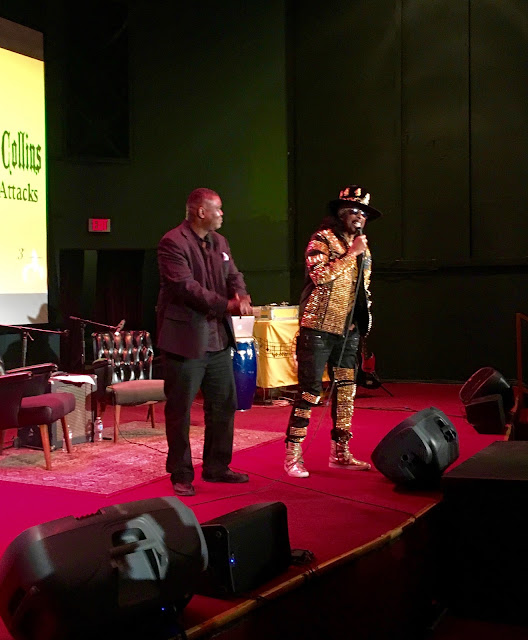 For Collins, it all started with the church ("Getting down for God!"), where he loved the music he would hear. "Music DROVE me," he explained, "I loved to draw, and paint, but what could I do at school with no guitar?" So he learned the clarinet, and kept at it until he was first chair clarinet. That's why it's so important to him that kids have access to instruments, and he is seeing to it. "If they're interested or good at music, HELP them. Mugs wanna learn. Help kids feel like they're SOMEBODY." When the Q and A portion of the evening began, one man asked where he could get some cool star sunglasses like his. Collins replied that he had them custom made when he first started out so that when kids looked at him, they would see their own reflection in his eyes - as a star. I love that so much, and was my favorite anecdote of the night. 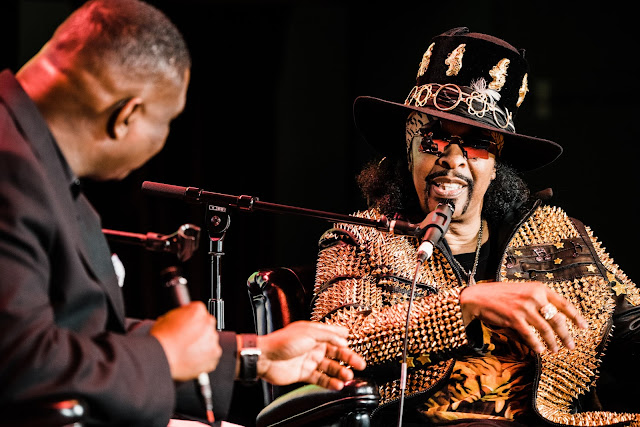 Another woman snaked me on my questions about Prince, but she asked if they'd ever worked together, and Collins confirmed that they never did. "He would come to shows ... he wasn't a threat, he didn't look like a regular brother (laughter). He took the funk to a whole new generation." That was completely true, because I only knew about the P-Funk due to Prince, and then my late friend, Darren Sakai, who used to play it all the time when he was my roommate in Hawai'i. I sorely wished he could have been there with me to meet one of his favorites. Yep, choked up again! 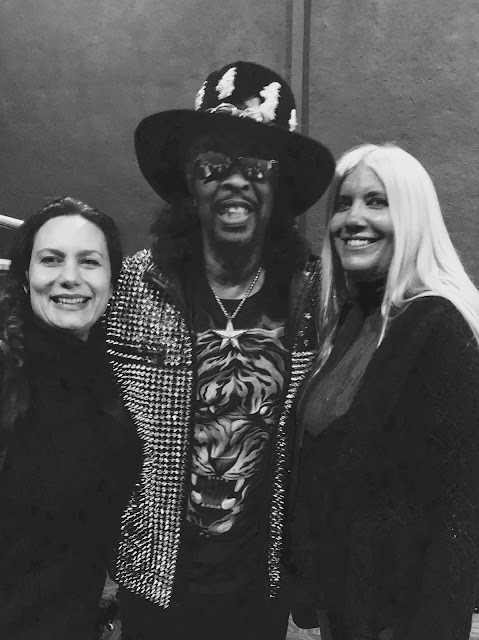 Catfish Collins was Bootsy's brother, who he said, "Was the whole reason I'm standing up here now. He had my back. Didn't nothing mean nothing but getting to the gig for the people. We'd leave the car in traffic." In response to one man's question about where funk began, Collins replied, "They started calling it 'Funk' with James Brown. They never help the Funk. We need y'all, applaud yourselves (we did). It was never about the money, it was always about giving up the Funk." And you can feel that truth in everything Collins says and does - tangibly. 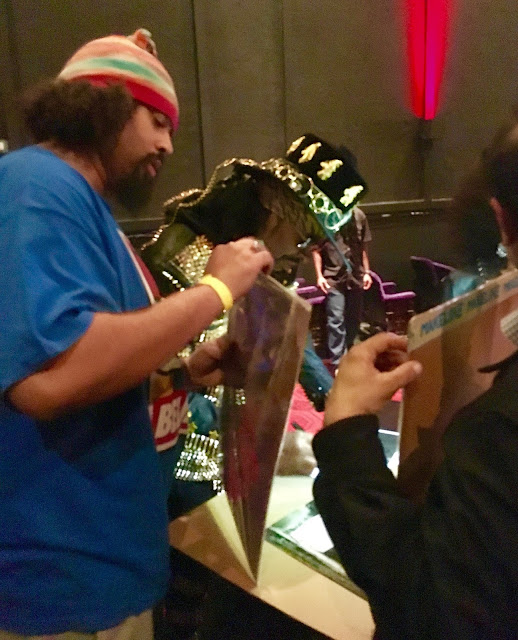 The questions had to stop sometime, but when they did, the chants began again. "Come back, Bootsy, Come back!" So he stayed and signed everybody's everything, graciously taking photos and taking the time to chat with anyone who approached. It truly was an evening of "Unplanned World Wide Funk Attacks", and we were all better for experiencing it. Massive thank yous to Mr. Bootsy Collins, his wife Patti, Dr. Scot Brown, DJ Lance Rock, K.C. Mancebo, Owen Smith and The Miracle Theater staff, and everyone who was there to feel the funk and the love. Spread it Worldwide!