Before They Go - A Venice Group Art Show

Last Saturday night was Very Venice, as we celebrated the arts and culture of Venice all night long. 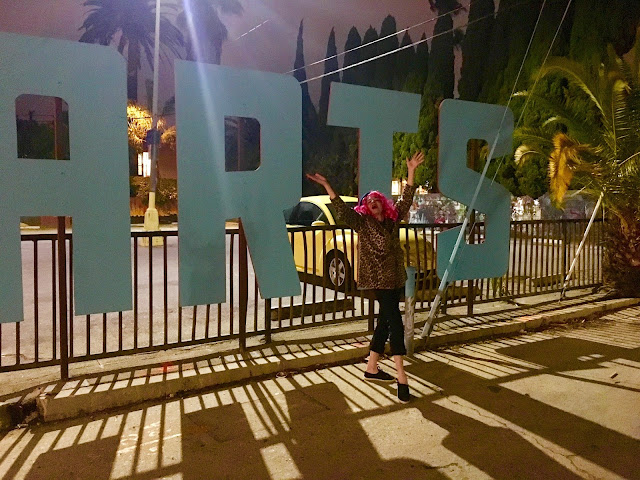 The evening began with a little soirée at Beyond Baroque to toast our venerable literary institution on its 50 years of existence. We're so lucky to still have a place to host such a comprehensive book store and performance facility that celebrates the history - and the contemporary torch bearers - of the Venice Beats - and Friends. It's a true gem. 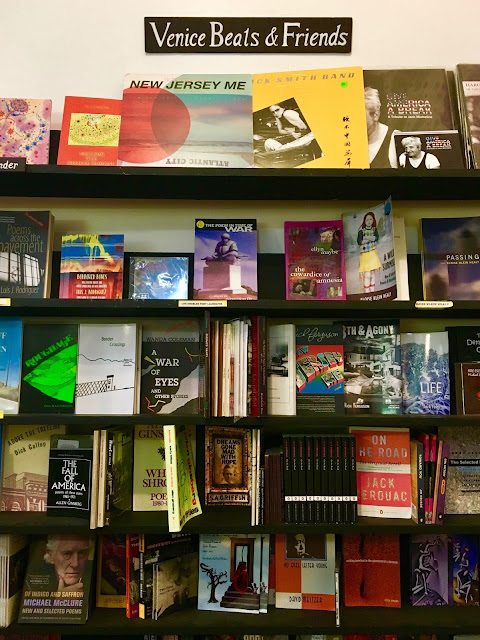 I got there a little late to hear the program, but glasses were clinked, and we got pretty much everyone there to follow us over to The Hangär (not sure why there's an umlaud) on Centinela to take in the opening of the Before They Go group art show featuring the work of Venice artists, and photographs of them all in their studios in the impressive project from Debbie Zeitman. 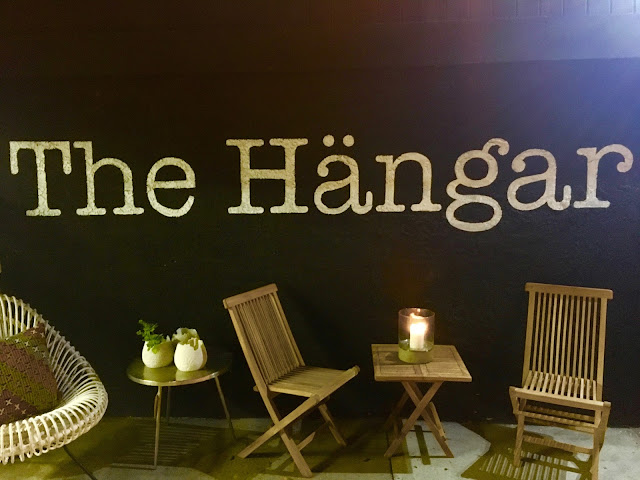 You might have seen some of these photographs on the wall at Wabi Sabi the past couple of months, showing our beloved Venice artists in their studios, well ... before they go. Several of the featured artists have lost their studio spaces in Venice due to the astronomical - and exceedingly greedy - rents pricing them out. This night was to acknowledge them all, and to appreciate what we still have, while it lasts - and to ensure that it always does. Venice is meant to be about the art, and this show puts an exclamation point on that truism. In addition to featuring artists that are gone, leaving, still hanging in there by their claws, or thriving and fortunate, some of the work also featured Venice places that are gone, like the Venice Beach Laundry piece from Taylor Barnes (the one that was next to Whole Foods). 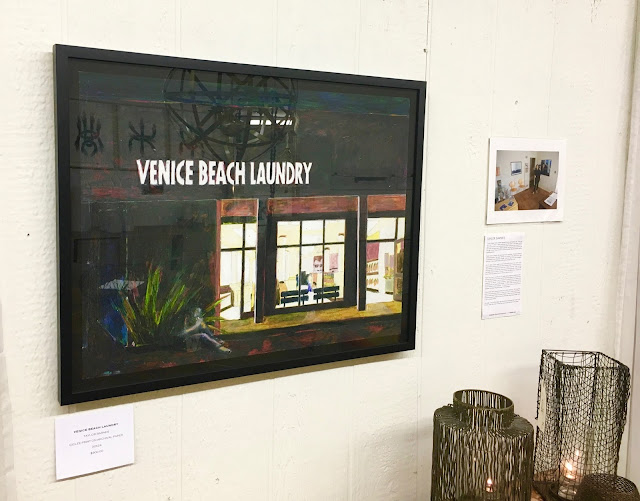 There was a great turn-out of artists and the people who love them. Wine flowed, introductions were made, and so were friends. The art was displayed around in little vignettes within the antique/ furniture store there on the corner of Centinela and Palms. It was a smart venue, because you could picture how a piece would look in your own home, as well as it offering ample seating for the many conversations going on around the room. 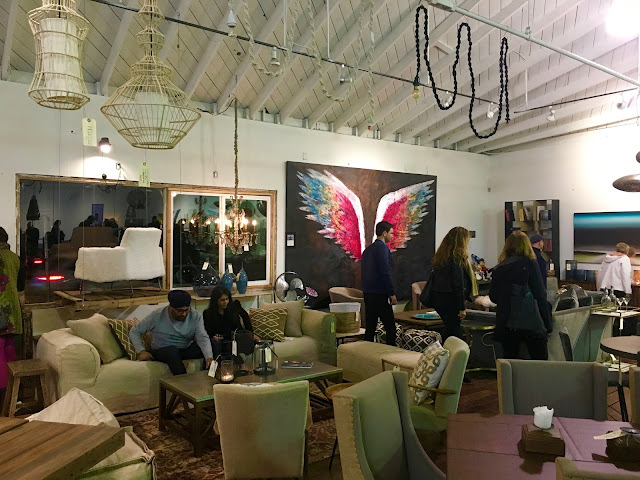 The diversity of the works were beautiful reflections of the Venice art community itself, and there really is something for everyone. You might be into wildlife, and there was a piece featuring Wise Wolves by Marty Katon for you. It was accompanied by a picture of Katon and a blurb telling about him and his art, as there was for almost all of the artists. I learned a lot about our resident artists that I didn't know before, and it's worth the cruise over to Centinela for the stories alone. Except there's also so much good art as well! 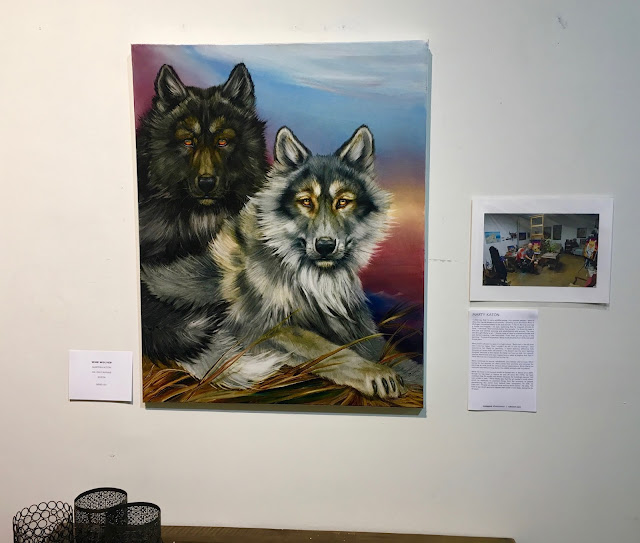 There was an almost photographic painting of artist Peter Lodato by Kenny Harris, that captured the legend perfectly. I wanted to cheers him. 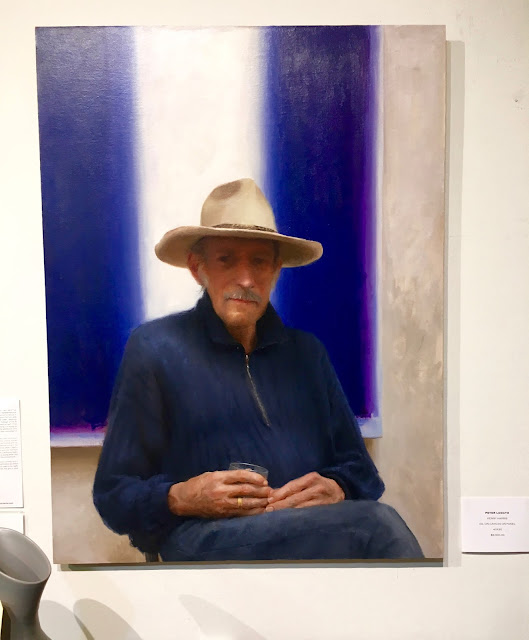 Trek Thunder Kelly was represented with his piece Control Alt-Right Delete, a protest poster that gets right to the point. As ever, our artists are taking the clay of the world and shaping it with their own views, without flinching. 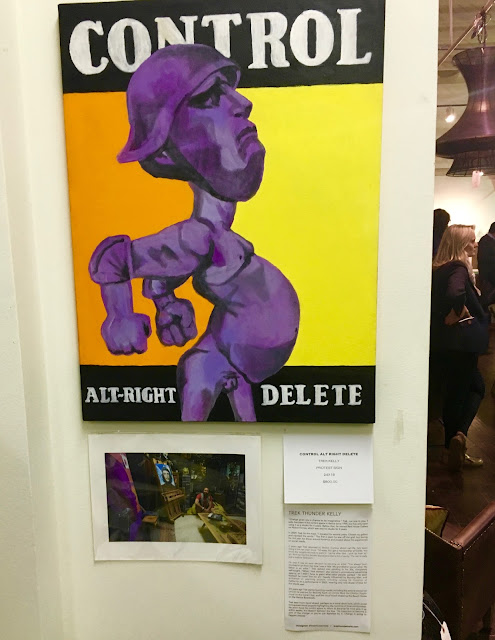 There were a few that would be good companion pieces in the same room, creating fine ocean views wherever you may be. I loved MB Boissonnault's The Long Winter ... and I bet some people are feeling like that right now ... 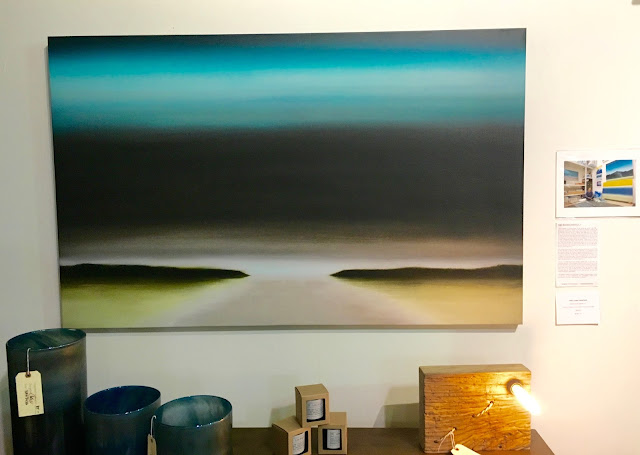 Google Earth by Jason Marello was another beachy piece that brought you an aerial view of  Venice (also a home to Google) ... 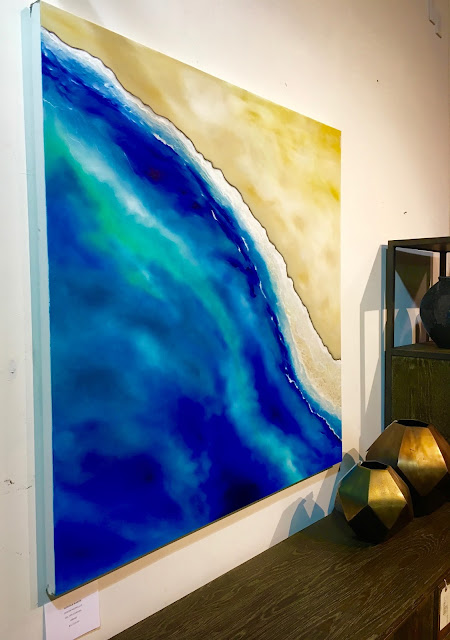 ...  and the String Field Series by Gary Palmer was also in the vein of water and meditation that added a sense of calm to the bustling venue. 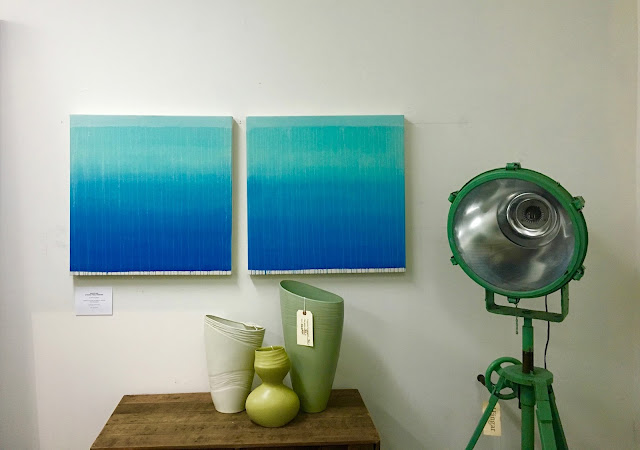 Flavio Biscotti was represented with his piece Monumento, and it looked right at home in its own still-life with lamp and vase - all also for sale. 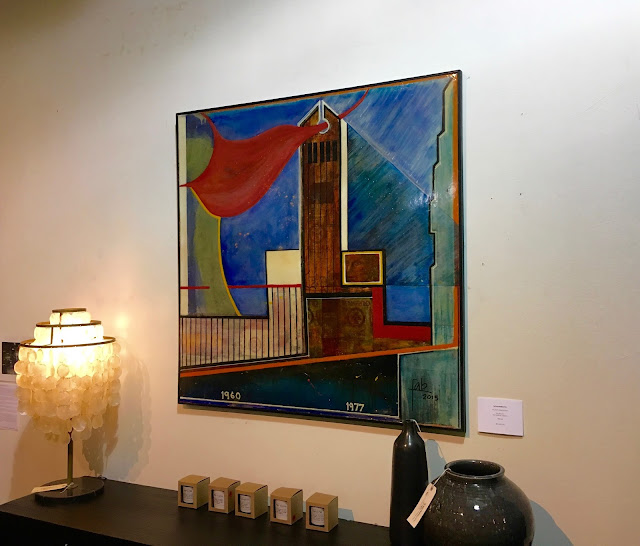 Rohitash Rao shared his art - and wit - with his piece calling everyone out for always being on their dang phones, When He Finally Looked Up. Zing! Be on the lookout for Rao's upcoming show at Google featuring his fake album cover works. Cannot wait. 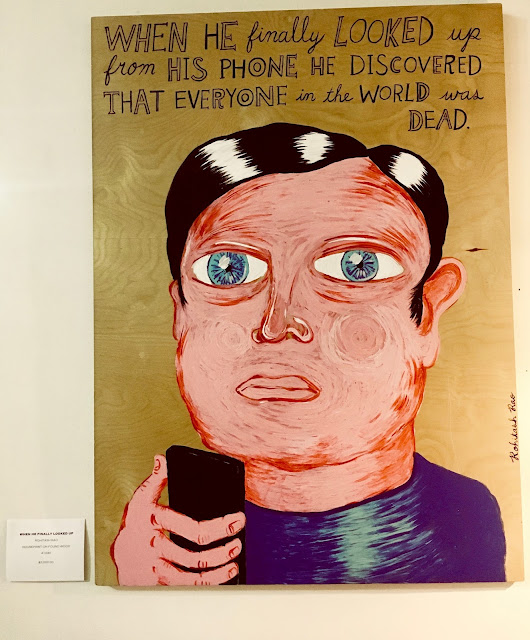 Sunny Bak shared her iconic photos of The Beastie Boys, and was there in the house representing. 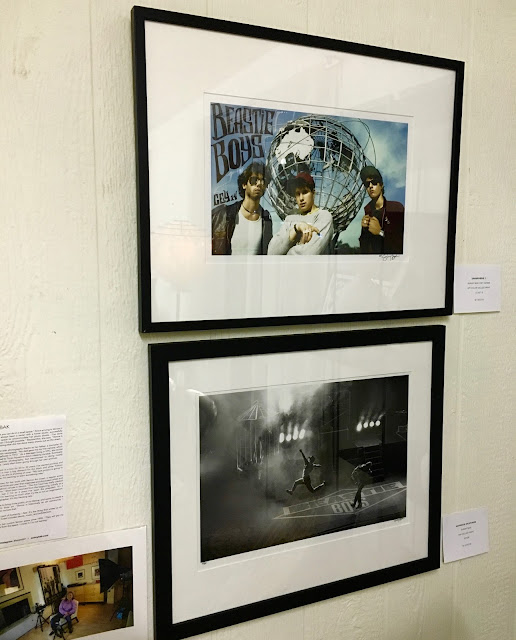 There are so many artists in the show (29!) that there is still plenty for you to go see that is not picture here, in multiple rooms, while the show is up at The Hangär for the month of March. I think maybe the most legit Venice piece came from Tonan Ruiz, with his Surf Culture - mixed media on a palm frond! It's a diorama of basically what it feels like to be in Venice at the beach. Love it. 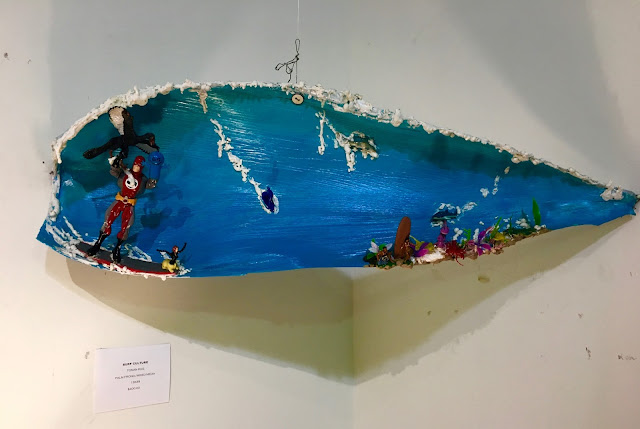 Like Beyond Baroque, this show was extra-great mainly for its celebration of the art and culture of Venice, and for its zoom lens on the importance of the arts in our community. To know the actual stories and see the photographs of the artists working in their own studio environments (while they still had/have them) is to truly appreciate what they and their art mean to this place. Sincere and heartfelt congratulations to Debbie Zeitman and Barbara Lavery for this impressive assembling of the current arts and artists of Venice. Thank you.

Before They Go is up through March.


*Shout out to The Rustic Kitchen on Centinela too, for your great food and warm hospitality shown to our rowdy bunch of art hooligans. Thanks!
Posted by CJ Gronner at 2:47 PM