There is a fundraiser happening today at Hama Sushi for the VJAMM (Venice Japanese American Memorial Marker) to finally make this happen, as it's been in the works since 2009. The funds raised will allow the Memorial Marker to be placed at the corner of Lincoln and Venice Boulevards, where Japanese residents were forced to board buses to be hauled off to the Manzanar internment camp where innocent Japanese citizens were held . It is a painful reminder, but a necessary one, so that we may be sure that an insane injustice like that will never occur again. 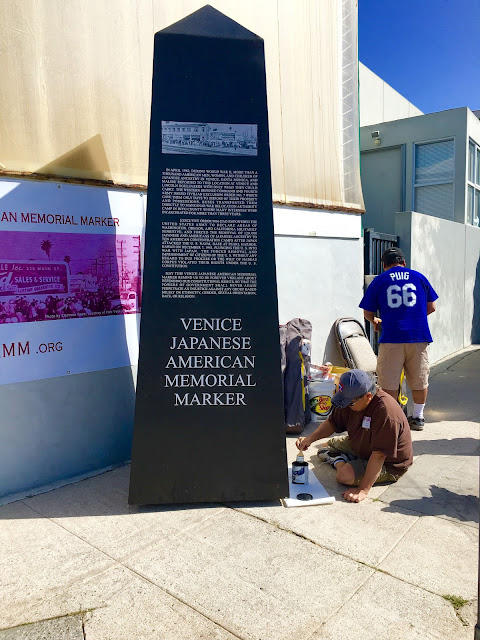 There was a delicious bento box lunch and a program this afternoon with 100% of the proceeds going to VJAMM, and if you go get your sushi tonight at Hama, 10% of all sales will also be donated to VJAMM. Sushi for a cause!

I grew up my whole life next to the Kusunoki family back in Minnesota - the kindest, loveliest people I've ever known. They were here in California for Manzanar, and it's still hard to believe that blight on our collective American conscious ever really happened. But it did. And we should never forget. Love and thanks to all who work so hard on this project, and I look so forward to seeing the real memorial unveiled. 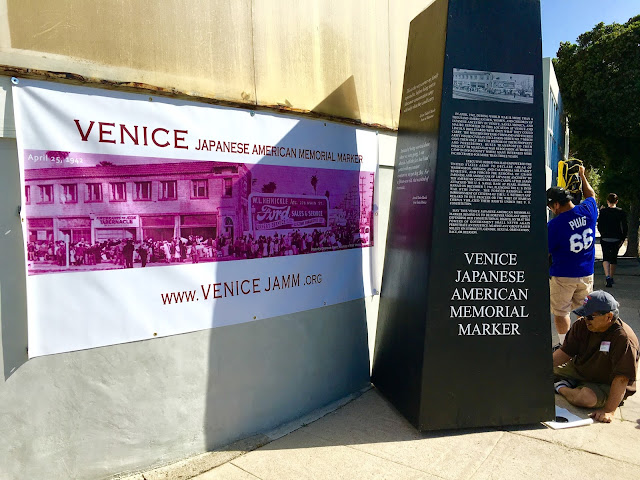 
“IN APRIL 1942, DURING WORLD WAR II, MORE THAN A THOUSAND AMERICAN MEN, WOMEN, AND CHILDREN OF JAPANESE ANCESTRY IN VENICE, SANTA MONICA, AND MALIBU REPORTED TO THIS LOCATION AT VENICE AND LINCOLN BOULEVARDS WITH ONLY WHAT THEY COULD CARRY. THE WESTERN DEFENSE COMMAND AND FOURTH ARMY ISSUED CIVILIAN EXCLUSION ORDER NO. 7 WHICH GAVE THEM ONLY DAYS TO DISPOSE OF THEIR PROPERTY AND POSSESSIONS. BUSES TRANSPORTED THEM DIRECTLY TO MANZANAR WAR RELOCATION AUTHORITY CAMP IN INYO COUNTY WHERE MANY INTERNEES WERE INCARCERATED FOR MORE THAN THREE YEARS.
EXECUTIVE ORDER 9066 HAD EMPOWERED THE UNITED STATES ARMY TO DECLARE AREAS OF WASHINGTON, OREGON, AND CALIFORNIA MILITARILY SENSITIVE, AND FORCED THE REMOVAL OF 120,000 JAPANESE AND AMERICANS OF JAPANESE ANCESTRY TO TEN AMERICAN CONCENTRATION CAMPS AFTER JAPAN ATTACKED THE U. S. NAVAL BASE AT PEARL HARBOR, HAWAII ON DECEMBER 7, 1941, PLUNGING THE U. S. INTO WAR WITH JAPAN. THE FORCED REMOVAL AND IMPRISONMENT OF CITIZENS OF THE U. S. WITHOUT ANY REGARD TO DUE PROCESS OR THE WRIT OF HABEAS CORPUS VIOLATED THEIR RIGHTS UNDER THE U. S. CONSTITUTION.
MAY THIS VENICE JAPANESE AMERICAN MEMORIAL MARKER REMIND US TO BE FOREVER VIGILANT ABOUT DEFENDING OUR CONSTITUTIONAL RIGHTS, SO THAT THE POWERS OF GOVERNMENT SHALL NEVER AGAIN PERPETRATE AN INJUSTICE AGAINST ANY GROUP BASED SOLELY ON ETHNICITY, GENDER, SEXUAL ORIENTATION, RACE, OR RELIGION.”

Never again. Venice, eat at Hama tonight if you can! Thank you.