Prince is gone. I just can't believe it. My phone started going off this morning, and I kept ignoring it, trying for a couple more winks after a restless night's sleep. When I looked at all my texts, one after the other read, "Not Prince!" "RIP Prince!" "Thinking of you, so sad about Prince". NO!!!! 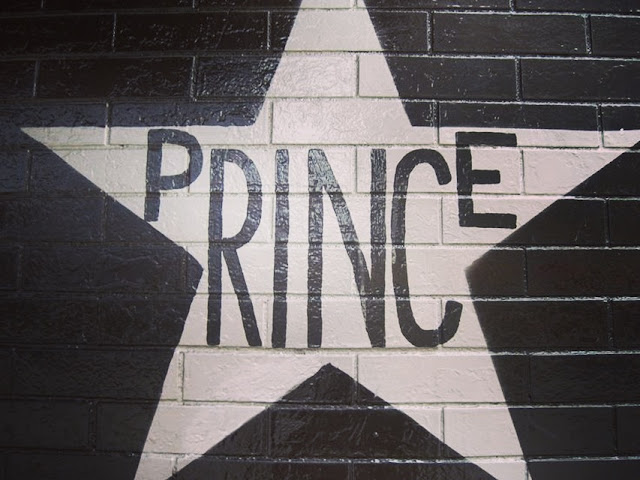 I immediately burst into tears. It hit me hard, like a toddler cries. I didn't think about it, it just erupted out of me. Not Prince! If you know me at all, you know this awful news is truly devastating to me. Prince is my all time favorite. In fact, Prince probably helped some to make me who I am.

You see, growing up in Minneapolis, Prince was IT. Prince was THE coolest. Prince was also kind of forbidden. Because Prince was "Dirty". Prince was shocking. Prince pushed every envelope. I was in junior high, and we would listen to Prince and be both thrilled and scandalized at the same time - in a good way. Singing out loud with my cassette Walkman, not realizing that Mom could hear the words I was belting out. This was not music my Mom wanted me to be listening too, and I loved it all the more for it, as all good rebel kids do. Every good D.J. knows that Prince will get everyone on the dance floor, and keep them there. His music is timeless.

The music. There is no one better. Prince could play everything, expertly. We would just watch him in awe, and in Minneapolis, we got to watch him a lot. My little friends and I snuck in when they were filming Purple Rain at First Avenue, 'cause we were not about to miss out on that! Life changing. I had a friend in junior high named Molly Larson, only Molly called herself "Princess" - with a star to dot the i. Molly had a tough life and Prince was about the only thing that made her happy. She would doodle his name all over her notebooks, and we would break down the songs' lyrics, right down to the moans. Molly really believed that Prince was going to be her Prince Charming, and swoop in and take her away on his awesome purple motorcycle with the glyph symbol on it. But that never happened. Molly dropped out of school, and I didn't know what happened to her until there was an article in the paper about Molly becoming a teenage prostitute, and being beaten to death on the side of a road. I was so sad for her, and remember being so sad that she never met Prince. His presence was felt even larger. (Prince and I never personally met, but I'll live on a look he once gave me until the day I die.)

I saw so many Prince shows over the years, one better than the next. When I went to college at Augsburg, it was the best because our campus was right in the city, and Prince was everywhere. Prince's drummer at the time, Michael Bland, also went to Augsburg, and would walk around in his big robes and Pope style hats, and we'd feel somehow closer to the Man. We'd have Prince sightings on his motorcycle blazing through Seven Corners, and it was magic. Prince would announce an arena show the day of, saying just show up with a can of food for entrance, and there would be a sold out show and the city's food shelves re-stocked that same night. When I was at Augsburg, there was no film major yet, so I asked if I could do my Senior Project as an Independent Study, and make a documentary on Paisley Park. The studio's manager at the time, Red White, gave me full access, letting me tour and film all over the studios in Chanhassen. Prince wasn't there that I saw that day, but the magic was felt everywhere. I have no idea where the old VHS tape of that film is, but I gotta find it.

I remember sitting on my friend's deck at her house across the lake from Prince's house late one night, when we heard the most astonishingly gorgeous electric guitar solo carry out across the water. Prince, jamming with the windows open in the Summertime ... I'll never forget it.

We saw Prince in the rain out here in L.A. at the Hollywood Bowl, one of the best shows I've ever seen in all my days. I saw him at Staples for the Musicology tour, when he gave that cd out with every concert ticket sale. That counted as record sales too, because Prince was also a business genius (we all remember The Artist Formerly Known As Prince. Smart.) 21 Forum Shows! Dance offs at Glam Slam! All those late night sessions at Paisley Park when Prince would jam with visiting artists, and you would just have your mind blown. And nothing will ever beat that Superbowl Halftime show. Nothing.

Prince gave us SO much wonderful music, so much artistry, so much to think about. He did whatever he wanted artistically, he dressed however he wanted, but he also gave more than anyone even knows, because he never bragged about it. He's probably responsible for setting me on the path to having a major thing for multi-talented, multi-cultural, multi-instrumentalist, multi-genre men ... for better or for worse. I remember hearing about Prince showing up at someone's door to talk about Jehovah's Witness stuff. Can you imagine?! That is the one time I'd let them in and listen. Or would have. NO! NOT PRINCE!!!

Last Summer, I was home visiting, and heard Prince was having a party at Paisley Park for the National Association of Black Journalists, of which I am not one. But I am determined. I was GOING. My brother and I took off to Chanhassen, where I proceeded to talk my way in, and single-handedly integrate this event with my brother. Prince didn't play, but when he took the stage right in front of me to speak, I can't explain the feeling that came over me. It was actual electricity, like a charge ran through me as I looked at him in his golden lounging pajamas, talking all smooth. The smoothest. The most mysterious. The most talented ... Prince. The one word name pretty much says it all.

If you're not from Minneapolis, you can't really understand how much Prince means to us. He became one of the world's biggest stars, but he was OURS. He never left. He stayed in Minneapolis, and made us all cooler by proxy. He loved Minnesota. He supported its sports teams, he supported its artists. We used to make our Mom take us to Rudolph's Barbecue to eat as kids, just so we could look at Prince's booth, and hope that he would come in while we were there. Every performer that would come to play in Minneapolis would tend to cover Prince, or at least mention him. First Avenue is like a church to us all, ever since Purple Rain, and Prince's star outside on its wall is becoming a massive memorial as we speak. The city is in deep mourning, with people gathering at Electric Fetus (where Prince went all the time, as recently as this last Saturday for Record Store Day) to cry and buy music. I've had so many texts, from friends who all feel the same way. Gutted. In fact, one of the first texts I got this morning was from my Mom, feeling for me, but also sad herself. Prince finally won her over. I feel so far away from home, and my people, and know this loss is just as massive and crushing for the entire city as it is for me. I bet the entire city will be bathed in purple tonight, and that Prince's music is all you'll be hearing back there for some time to come. At least we'll always have that ... and now maybe Molly will finally get to meet Prince. 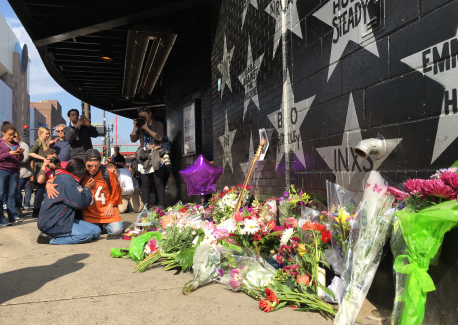 I'm just so, so sad. Wow. A world without Prince. Thank you for your lifetime of music, Prince, and for making this Minneapolis girl so happy for so long. Nothing Compares 2 U.
Posted by CJ Gronner at 3:44 PM