I love to wander around the neighborhood and happen upon a new work by Robin Murez. Her Venice Public Art mission is one of the best and coolest attempts to keep Venice so very special. The latest one is on Electric and San Juan Avenues, and features a portrait of Abbot Kinney with a reflecting mirror. Very cool. 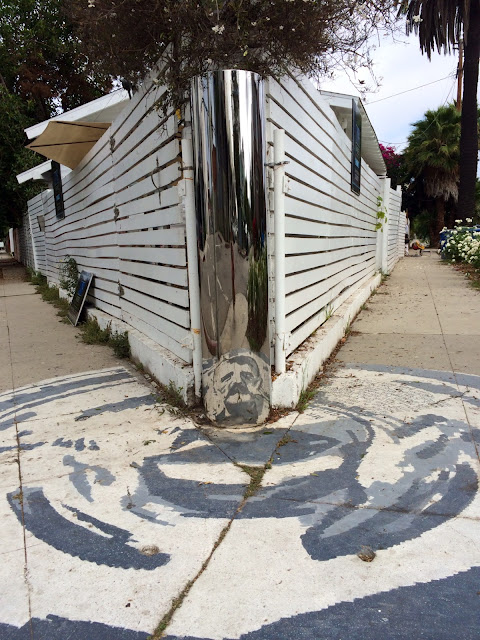 Kinney dreamed up this wonderful place, and we who live here are all stewards of his vision. I wonder what he would think about artists and lower income families being pushed out of the home that they also love? The little earthquakes we've had this year may just be him rolling over in his grave. 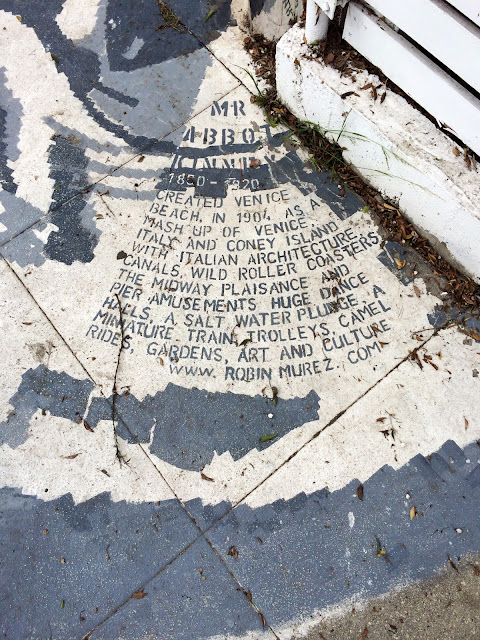 But maybe not. Because there are still people like Murez out there thinking up - and executing - creative ways to show appreciation and love for Venice. I thank her, and all of you who keep making Venice the most interesting place ever to live. Sincerely.


*Honorable Mention - Kudos must be paid to the fantastic dame in the dark last night. My street butts right up to Abbot Kinney Boulevard and unfortunately, The Brig. Tools with big mouths come out of there and stumble to their cars parked on our street regularly, and that's ok. We live in an urban area and that's to be expected. What is NOT expected is those tools going to sit in their parked car after bar close, blasting lame music so loud with their windows down that my windows shook in their panes. Literally. That and their very poor singing along at the top of their lungs woke up the entire neighborhood.

I couldn't quite figure out where it was coming from at first, but when I looked out the window, I finally saw an older woman march out of the alley, right up to the car window and shout, "What is wrong with you?!" I couldn't make out the tirade unleashed back at her, just her repeatedly saying, "Just go home. Go home." The music turned down and she turned and headed back down her alley, There wasn't time for me to get down there, so I yelled out into the night, "THANK YOU!!!" and hoped that both the woman and the carload of little dicks heard me. The car squealed out and the driver yelled, "BITCH!!!!" at her. It reminded me exactly of the attitude in that Ariana Grande video going around, just entitled little brats that have no respect for anything.

Abbot Kinney the street has gotten too cool for its own good. People like that last night should know before they come here that we're not having it. And that woman last night was more O.G. than anything I've seen out of anyone around here in a while. Good on her. And thanks again!