This past weekend was all about ART in all its many shapes and forms. It was also about parties, and a good one that combined both went down Saturday evening at Bergamot Station, where there were receptions for Ed Moses at the William Tuner Gallery, and Exene Cervenka at Sloan Projects.

It was a beautiful night, and the place was packed. The crowd outside Sloan Projects was decidedly more punk rock in appearance, fittingly for a show celebrating Cervenka, the front woman of the seminal L.A. band, X. 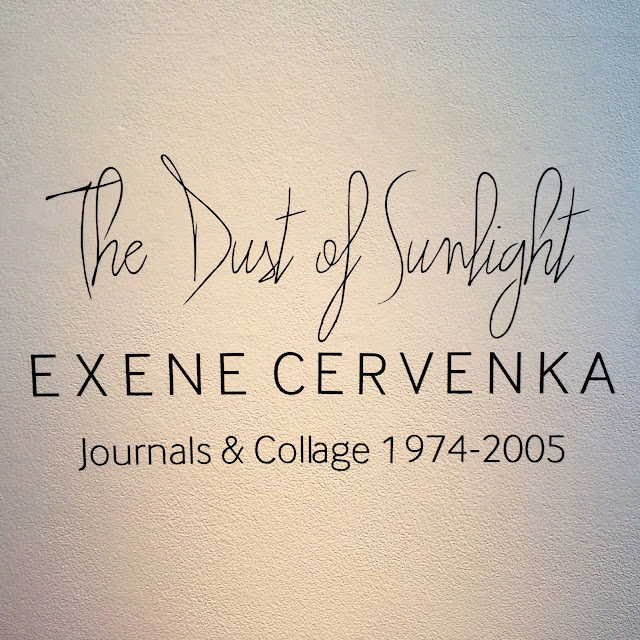 The Dust Of Sunlight showcases work in journals and collage from 1974 - 2015. I love journals, and I love collage, so this show was right up my alley. Cervenka herself was there, meeting fans and signing copies of her show book that contains many images of her collage work - and that I now own. Cool. 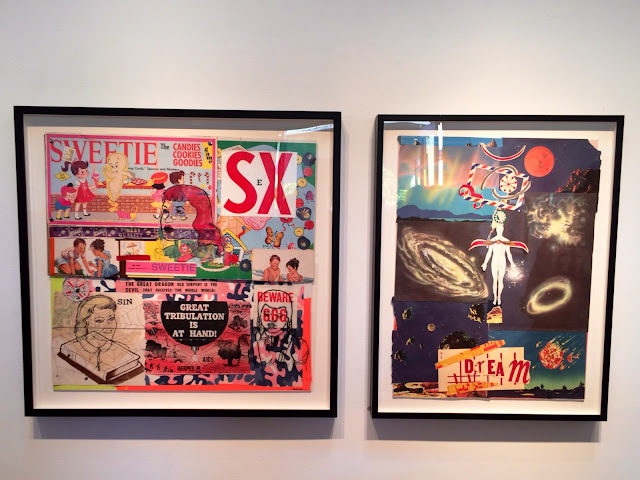 Her images are made up of sweet story book images mixed with her drawing and musings, cut-outs and ephemera gathered along the road during rock tours. I loved every piece, and the quote in the press release from Cervenka that says, "I didn't make the fucking reality on the planet ... but I can make art out of it." That's right. We all can. 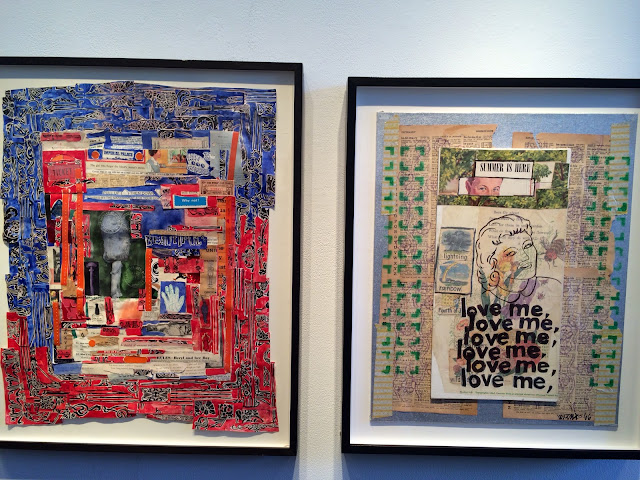 We enjoyed some cocktails and a groovy band set up in the parking lot, loving the fact that we kept bumping into old school Venice people, all out in the name of art. 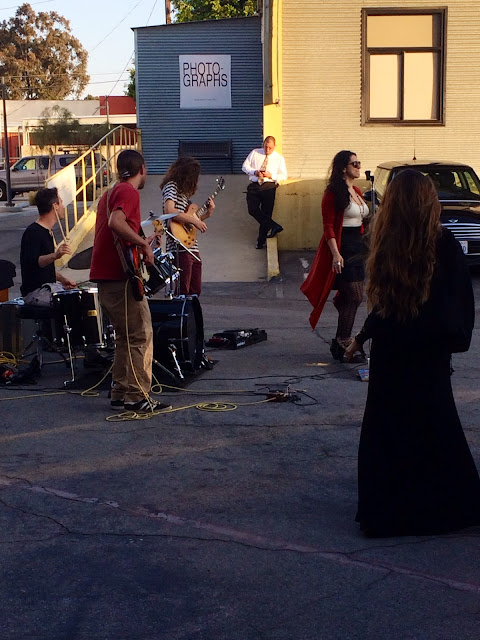 Over at William Turner, it was another packed house of folks squeezing in to see the latest work from Ed Moses. At 89, it was impressive to see both the sheer size and number of new pieces in the Now And Then show, but also what seems like a new direction for Moses. 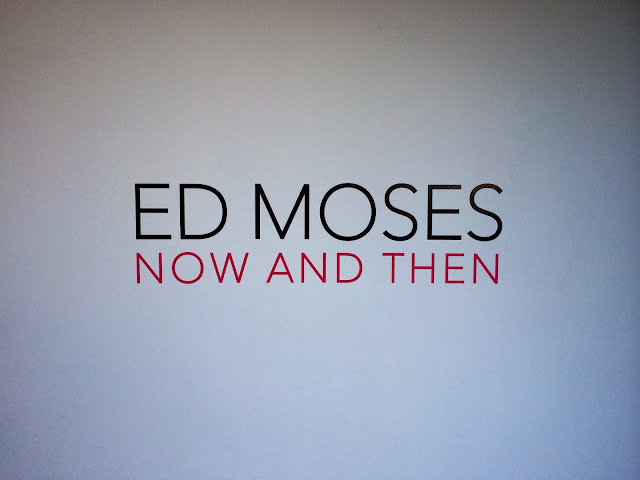 The works were much darker and a bit vampiric to me, lots of blacks and whites and reds, shot through with jolts of neon color. Coming off his rose wallpaper pieces (always prominently displayed at our now sadly gone Hal's), this appears to be a brand new direction for the ever-evolving Moses. 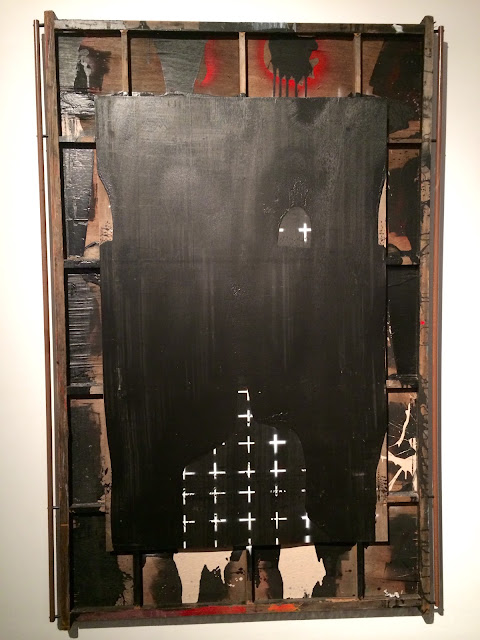 The crowd skewed older at the Moses show, with many of the artist's contemporaries in attendance, but right when I was thinking that, I caught a tiny little girl standing mesmerized in front of one of the big paintings. It is never too young to teach them to appreciate art. 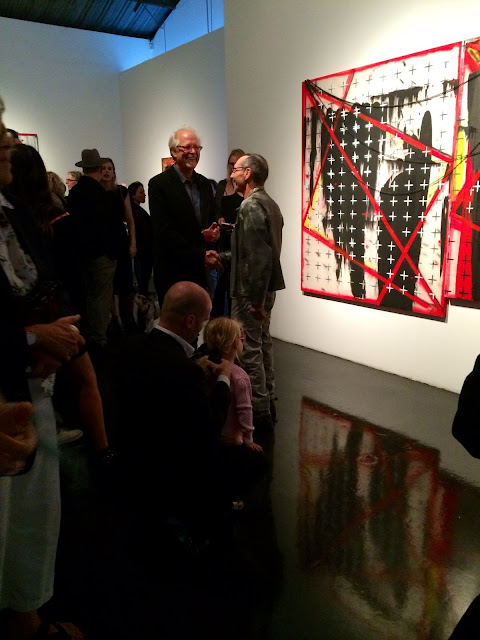 The art was exciting, and so was the atmosphere. As the openings only went until 8 pm, we decided to carry on the party over at Wabi Sabi, which has now kind of become our default Hal's as one of the few places left on Abbot Kinney that you can get a stiff drink, and actually still see people that you know. 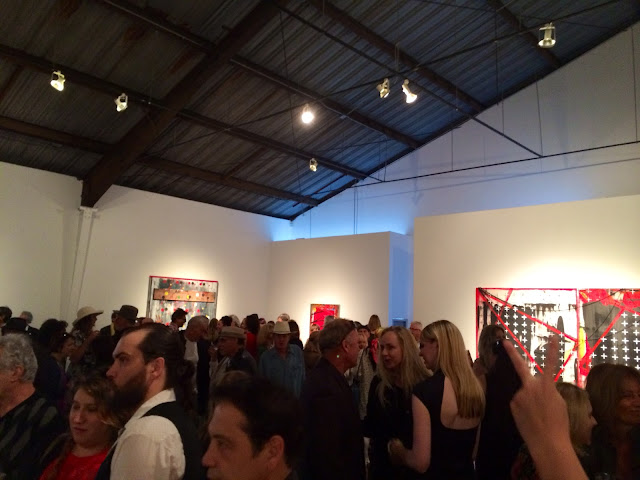 We weren't disappointed there, as one after another of the old friends we'd run into over at Bergamot were now showing up at Wabi Sabi, with none of us saying so to each other at the galleries! It was like group think of the very best kind. Drinks flowed as people mingled between their tables, and we all raised our glasses to art ... and to the Venice we love.

The Dust Of Sunlight is on now through July 4, 2015 at Sloan Projects.

Now and Then is on now through August 8, 2015 at William Turner Gallery.