The Summer edition of the Venice Art Crawl was held last night, and - per usual - it was a total blast. My bike is out of commission so this one was done on foot, and man ... there's a lot of ground to cover. We did really well, but still only got to hit about half of it. And it was awesome.

We started off on Abbot Kinney, since that's closest to my house, and it was fun to see some ladies painting outside of the Ohm Salon, while we were deciding if we had time for a quick drink at Wabi. We did not. Not if we wanted to see as much art as we could, and we did. 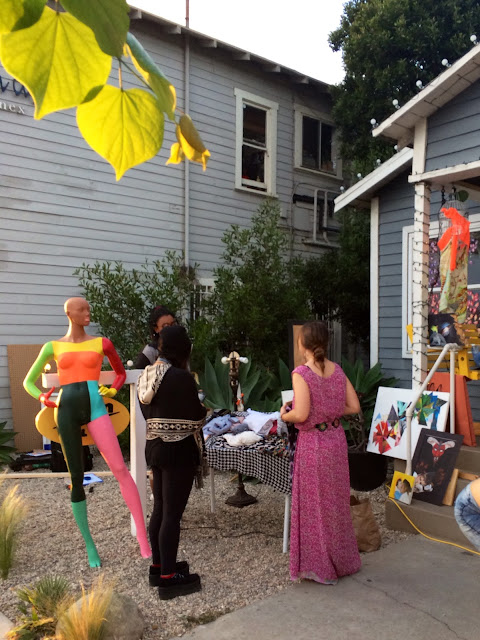 The Aust store had art by Francesco Masci and tunes by the Cerny Brothers ... and PBR's. 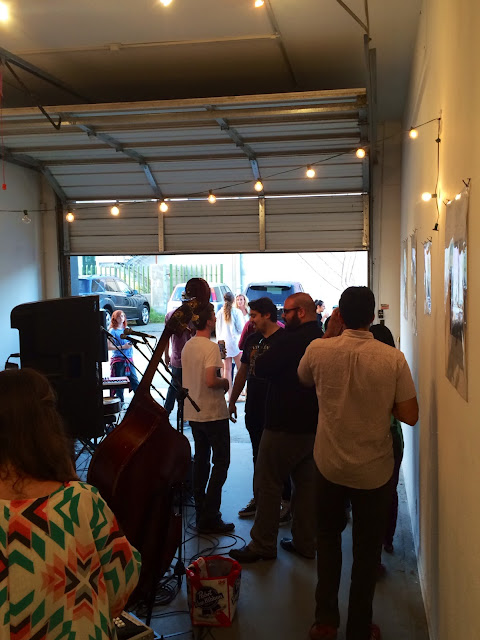 Heading toward the sunset, we passed by the old Anjela Shoe Repair shop, only to be stopped in our tracks by the darling new store in that space, L'Angels. Hand chosen by Andy from the shoe repair shop, the store features 100% work by L.A. artists and creators. Excellent. 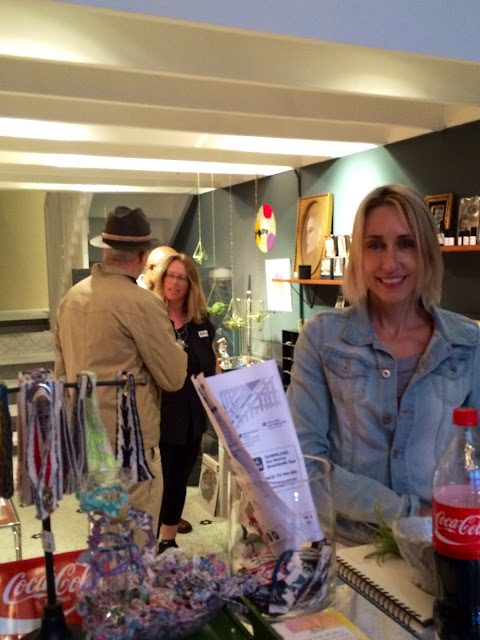 Just about my favorite thing I saw in the entire Art Crawl were the jewelry pieces in there by Venice local, Susan Rich. She has taken chips off of the Venice Graffiti Walls and turned them into rings and necklaces. They are so cool I can't stand it. Get in there and see for yourself. 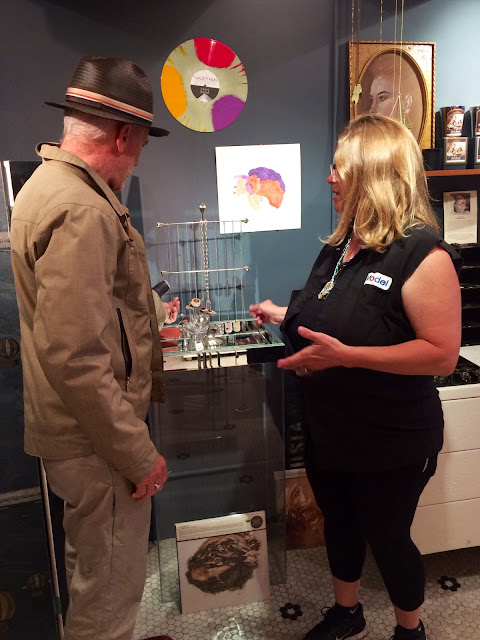 Cruising on up the boulevard, we stopped in to see my friend Peta at Wylie Wilson, where they were featuring smooth jazz and art by John Cesar - and all her wonderful lingerie creations, all made about six blocks away. These are the places that are actively keeping the spirit of Venice alive on Abbot Kinney, and they are the places locals should support. Period. 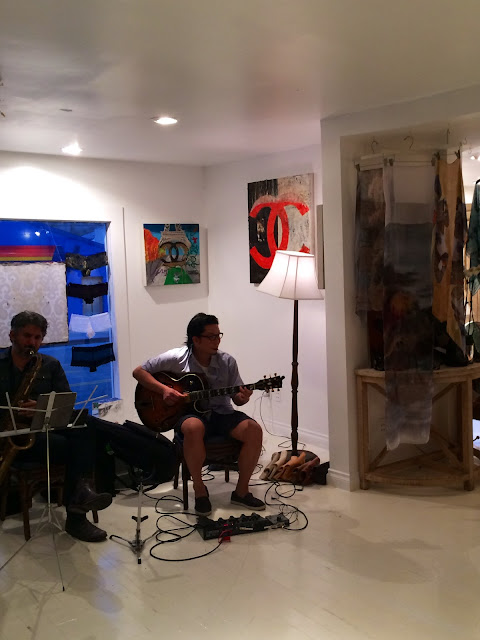 We crossed the street to see the exceptional work of Fin Dac at the C.A.V.E. Gallery. It's really impressive pieces depicting beautiful Japanese women, like the one on the wonderful new mural up the street. 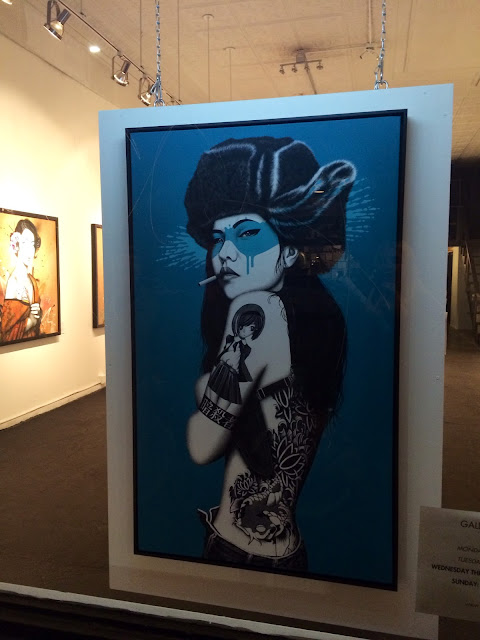 My favorite piece in there was one of those women done entirely in Italian (Venice) mosaic. So cool. 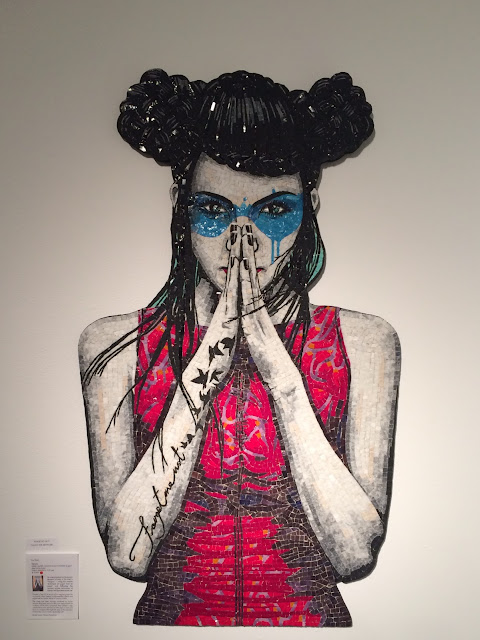 Another highlight of this Crawl was in the magical space behind the walls of the Ecole Claire Fontaine on Abbot Kinney. There were about ten artists displaying in there, and a bunch of adults playing on swings and climbing trees. It was adorable in there, and showed a lot of good art too (we especially liked the pieces by Audrey McNamara). I'd never been in there in all these years, so it was nice to see the place where so many of Venice's little ones have learned their first lessons. 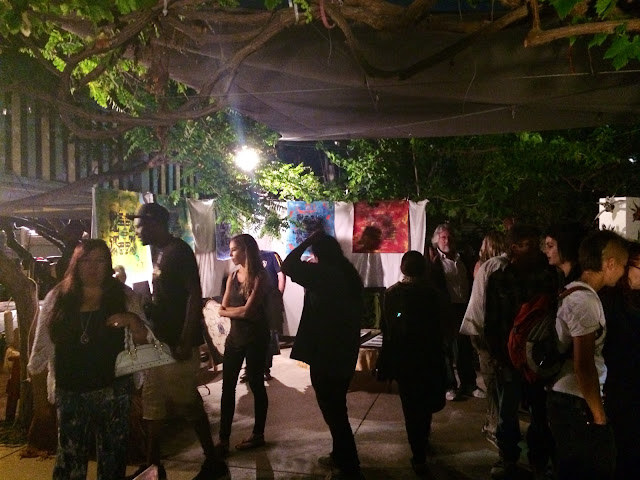 The Beach House next door featured the art of Alon Goldsmith, and a lot of super cute, super expensive beach lifestyle stuff. And a cool video projection floor. 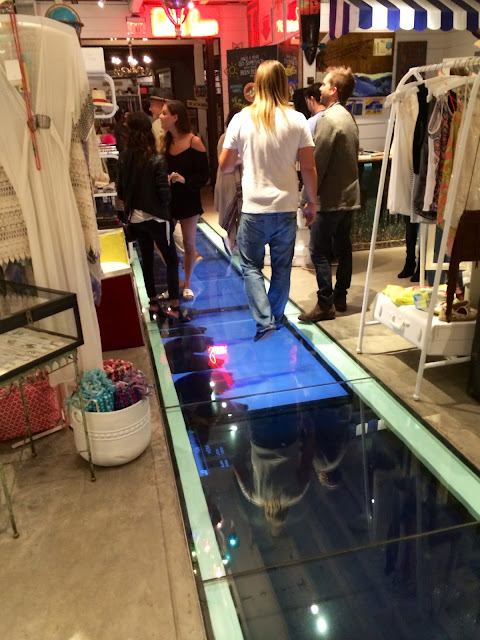 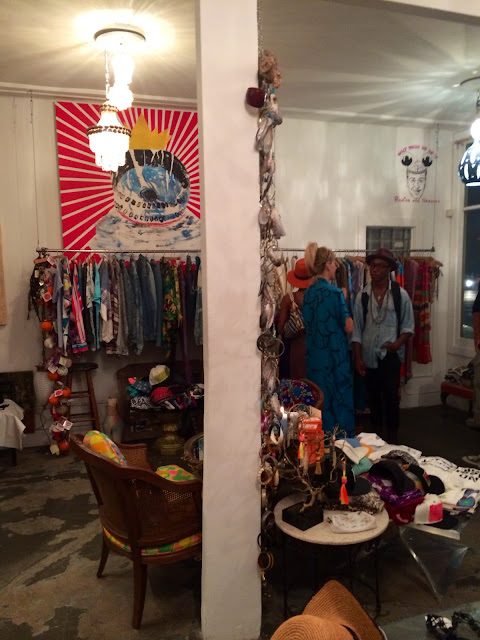 Onward we sped ... the Sole Bicycles garage had a packed house for the art of Isabelle Alford-Lago and her big apes. That one was quite the party, but we couldn't stay because we wanted to get over to Small World Books and check that out. Too late, they were already closed. 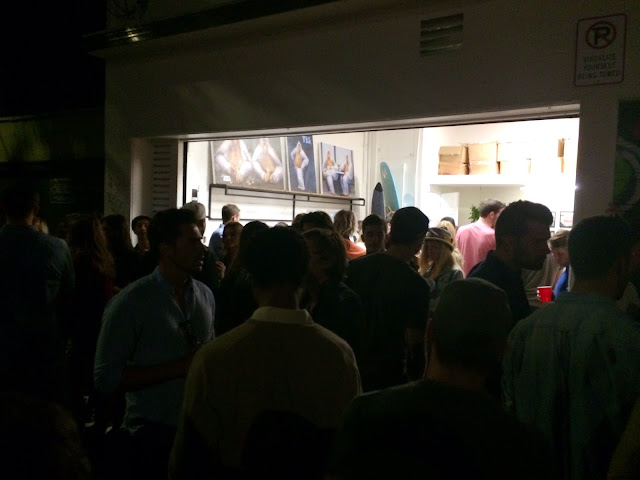 The Sidewalk Cafe was real fun, and great because they were showing the fantastic work of our friend, Christina Adshade. 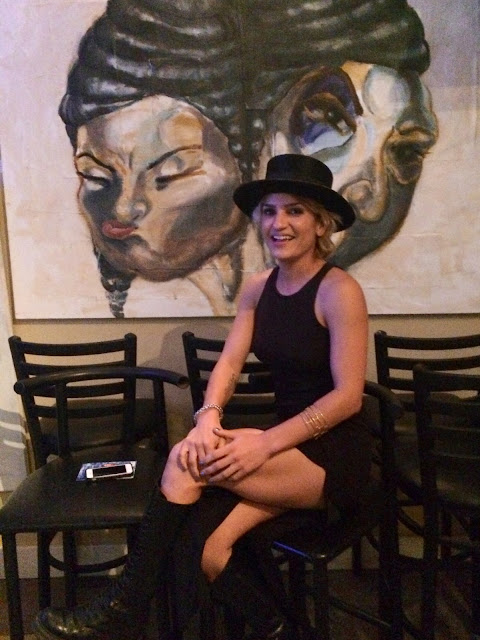 I'd only ever seen her art online, so to see the detail and talent behind it up close was impressive. Plus they were playing old Guns 'N Roses, guys from The Sons Of Anarchy were there, and so was the Tree Man. That's a good Venice hang right there. From there it was off to Gotta Have It, as most of the other venues were wrapping up by then. DJ Redbeard was playing o.g. reggae and dancehall, and I loved every single note he spun. Great party jams. 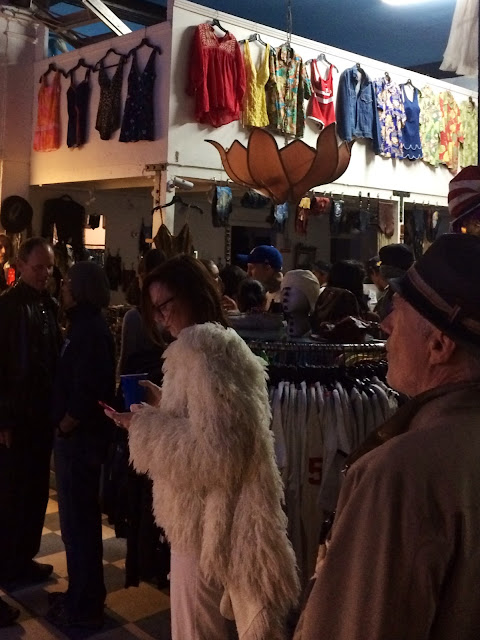 The art on display was by Bethany Richards aka Pink Riches. Her art and her style were both extra groovy. 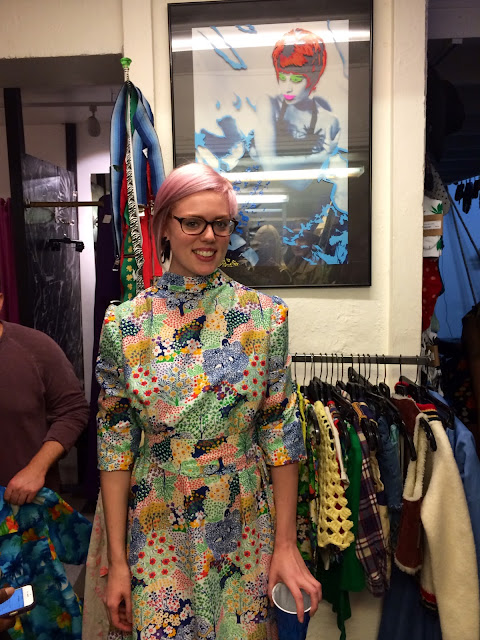 Enjoying a beer with the crew there, we checked the map - and the time. We still had over half to see and no time to do it. I think next time I might have to begin on the Washington Boulevard end of things, because I never seem to make it that far down. Too much art to see is an excellent problem to have, however. The crowd spilled out on to the sidewalk, like parties of yore, and we all remarked how we loved the Art Crawl so much, because it reminds of how First Fridays used to be ... with music, and drinks, and most importantly, everyone you know. 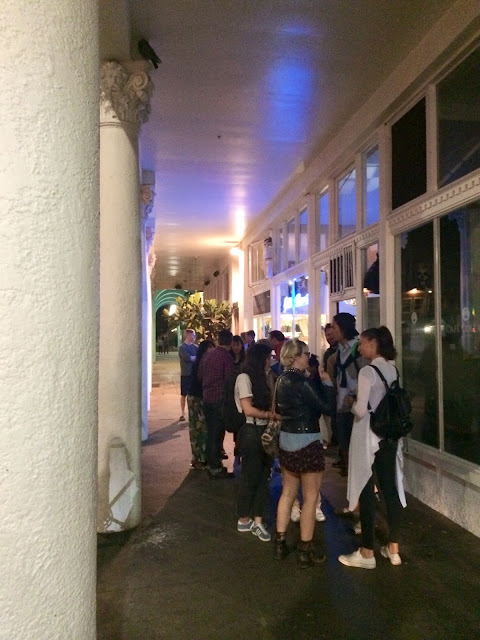 We accepted our fate of only getting to half, and decided to console ourselves back over at Wabi Sabi. As we traipsed back over to Abbot Kinney, we passed an enormous, flowering cactus. As my friend Mario was with me, and we had just had a triumph of saving and sharing an endangered cactus that very day, we felt it was an appropriate artistic display to finalize the art portion of our crawling with. 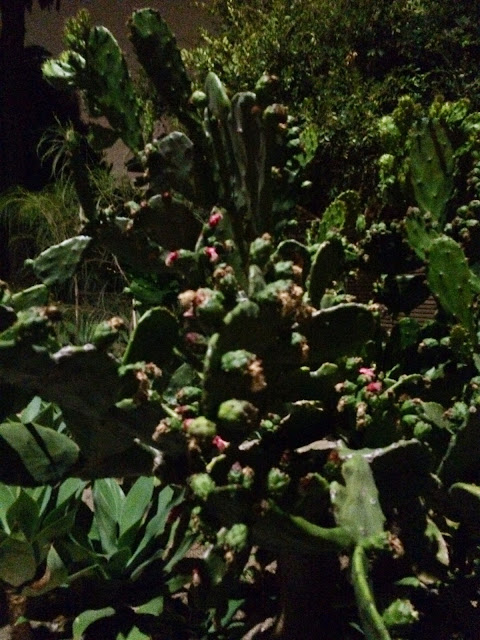 We toasted a great day, a great crawl, and the fact that we got to see so much of that fresh art, in the fresh Summer air. 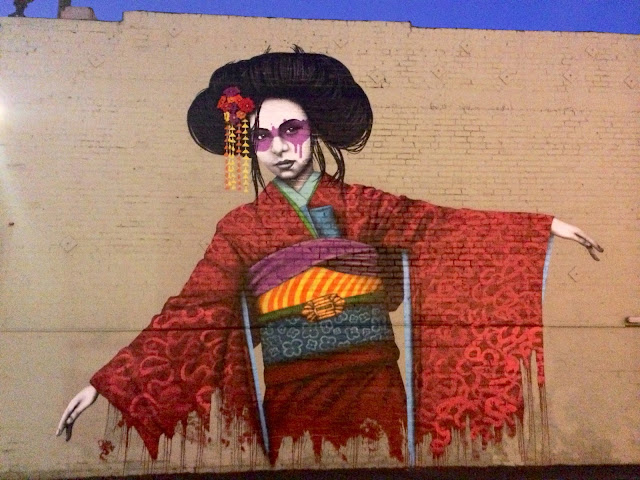 As ever, thank you so much to all the incredible people that put this celebration of our local artist together every time. It's such a gift to the community, and well ... just fun as hell.

See all you crawlers again in September! (the 17th. Mark your calendars.)