The Wee Chippy - Revolutionary Fish And Chips For Venice

My colleagues and I were looking for fish and chips for lunch last month, and during our online search for a good spot, someone asked me about The Wee Chippy, knowing that I was in Venice. Well, I didn't know, I'd never heard of it. But I had to know. Now I know.

Joe Gorrie is a Scotsman, living between Venice and New York for the last fourteen years. He had been working in television, grew tired of that, and was about to move back to New York for good, when on a run to the beach, he decided that he had to do something that was "very Venice, something nuts" before he left.  When thinking about what that might be, he thought, "I'm from Scotland, I can do anything with potatoes, what about chips?" Fries. Whenever Gorrie was asked to bring something to a party, he was only ever asked to make his chips. So chips it would be. 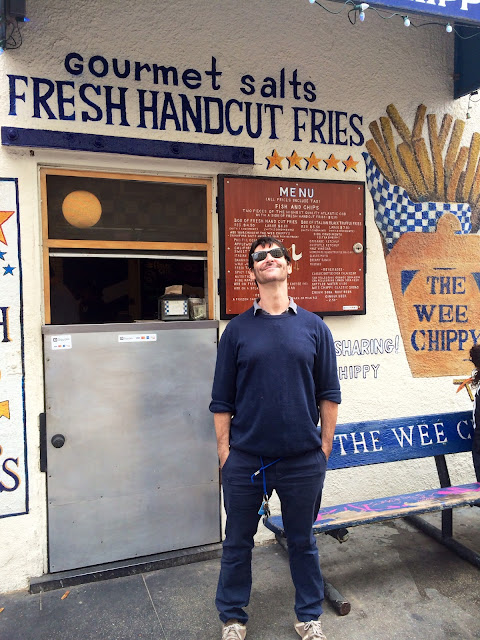 The day before Gorrie was packing up to leave New York, he chanced upon a store in his neighborhood that had just opened. Inside were rows and rows of jars of flavored salts. Flavored salts! Now Gorrie knew that he had the thing that would set his chips apart. They would be flavored themselves vs. having to dip them in stuff ... which you could also do! Multi-flavors! It was on.

The Wee Chippy opened for business in March of 2013 in their little half-door space on Westminster, right off the Boardwalk. With no culinary background, no advertising, and only word of mouth, within two months of being open, The Wee Chippy was voted "Best Of Venice" in the LA Weekly. Gorrie also proudly dropped that they have more five star reviews on Yelp than Gjelina does, which is nothing to sniff at.

The chips are getting so much buzz because they truly are delicious. Everything is fresh, they don't pre-make anything. Each batch is made to order, and there's twelve different flavors to try. Everything from black truffle and garlic rosemary to jalapeno-ginger and Gorrie's favorite, sweet toasted onion. Then there are the dipping sauces (like the divine truffle mayo), combining for a flavor explosion every time. "It's never been about money, I wanted to do something for the neighborhood ... you get a bag of chips at the seaside and go for a walk ... Heaven." 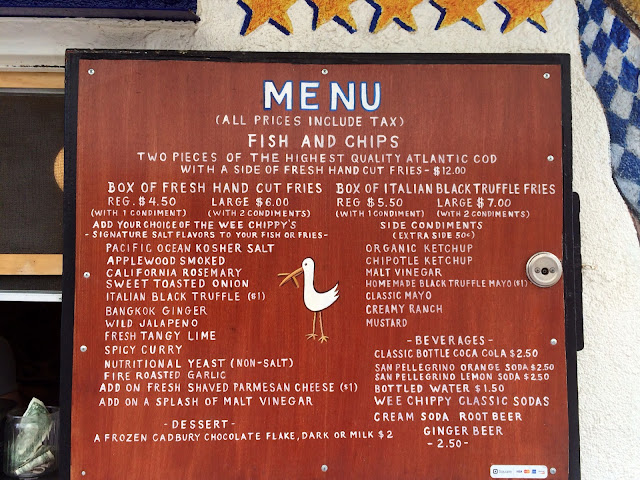 Once the Chippy's reputation was built in the first year, Gorrie decided he needed to add a protein so it could be a full meal. The obvious choice was fish, so once Gorrie found the finest purveyor of Atlantic cod that he could, it was on. They started serving fish and chips last July, and there's been lines in front ever since. Speaking of lines, Gorrie said every day around 4:30 pm, there is a line that stretches almost all the way to the Skatepark, full of starving skaters ravenous after their sessions. "The skateboard kids have kept me in business. It melts my fucking heart, it really does." Those skate kids are loyal too, appreciating the Venice Locals discount Gorrie hooks them up with (and there might be an occasional 4:20 deal too), even wearing Wee Chippy shirts in contests. "We take care of each other majorly ... they really did save the shop," Gorrie added, gratefully. I love it.

There's something about fish and chips at the beach that is just the best. "I want to bring fish and chips into the 21st Century," explained Gorrie. "I want to do old school fish and chips with a modern spin, with different flavors for every nation. I want to introduce people to new flavors via the most universal food people can share." This new take on it (being perfectly executed by Gorrie's chef from New York, Victor Martinez) has attracted a lot of attention from top chefs all over town wanting to collaborate, and now Gorrie's fellow Scotsman, renowned chef Grant McPherson is in talks to open Wee Chippy locations in Las Vegas ... and it all started here, just off the Boardwalk. 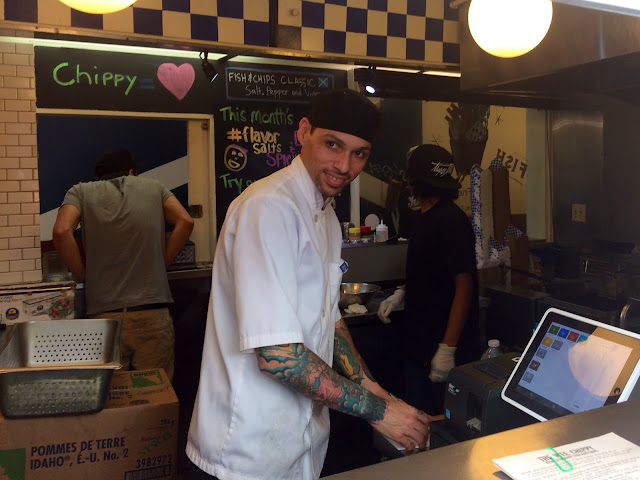 In addition to Vegas locations, Gorrie is dreaming up more ways to bring flavors to the people: a line of potato chips, condiments, sodas, and even a partnership with a chocolatier are all in the works. Oh, speaking of the sodas ... the Wee Chippy label root beer is one of the best I've ever had. It was so refreshing and old fashioned and yum with my fish and chips that I'd like another right now, please. Catering, an app to have chips delivered to you on the sand on the beach (!) ... Gorrie is full of ideas for the Chippy. You may also soon be hearing about rooftop fish frys at the Sunset Suites hotel nearby. Fun.

"Venice locals have made this the place that it is (hence the discount)," Gorrie reiterated. When he put a bench out front for people to sit and enjoy his wares upon, the Police told him he'd have to move it or get a fine. He refused and it remains. This bench is a meeting place. People come in the morning with their dogs and kids, have their coffee ... other people bring their own chairs. It's a place for people to congregate with their neighbors, and build community. Banning tables, chairs, benches and even trash cans (Yes! Gorrie was told he couldn't have a trash can in front! Seriously, people have to stand and eat and walk until they find a trash can. Nice red tape, City Of L.A. Another vote for Venice Cityhood.) hinders that. Cops have been called for a classical guitarist (Vinny!) playing out front. He couldn't play there, but he could play 25 feet away on the grass. Ridiculous. Let's work on that, Venice. Anyway - people have made friends with each other just from meeting at the Wee Chippy, and that's a beautiful thing.

Gorrie and his sweet rescue dog, Theo stick pretty close, getting their sandwiches at Zelda's and smoothies at The Fruit Gallery, but they do love to stroll over to Abbot's Habit to get that bagel. Other than that, you can usually find them in their quaint corner of Venice (that really should be a true food court, with tables and chairs and live music and fun. Come on already.), keeping an eye on the Chippy. 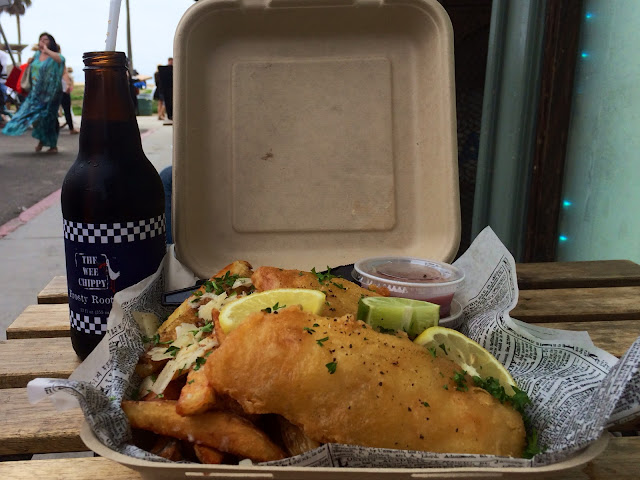 "I CHOSE to do The Wee Chippy here in Venice. There was just something about it. There is so much world class untapped talent just walking by every day here...This is an AMAZING community. Everyone here has my back, the loyalty is beyond," said Gorrie with true sincerity. "I don't even want to go back to New York. I don't want to go anywhere else - gospel truth - I only go as far as the pier. I eat, breathe, work and sleep here, and I love it." I totally get it.

As I finished my absolutely delicious lunch, Gorrie said, "I just want to do good quality food that everyone can afford, and give back to Venice what it's given me." The tag line for The Wee Chippy is "Revolutionary Fish and Chips", and in today's Venice climate, that statement is about as revolutionary - and appreciated - as can be. Viva La Wee Chippy!