Last night was the Surf and Skate Silent Auction at the Robert Berman Gallery in Santa Monica. It seemed like the whole surf and skate community of the state turned out, as packed as it was in there for the party. Hot. Awesome. 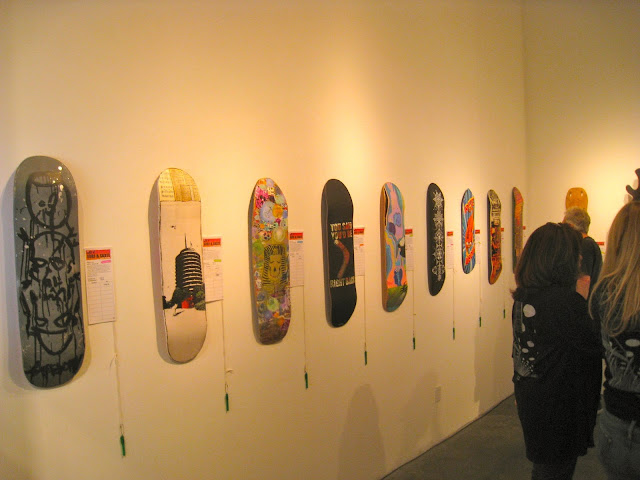 A sister/brother event to the Venice Art Walk, the Surf and Skate Auction also benefits the Venice Family Clinic, so everyone was on board - pun intended. 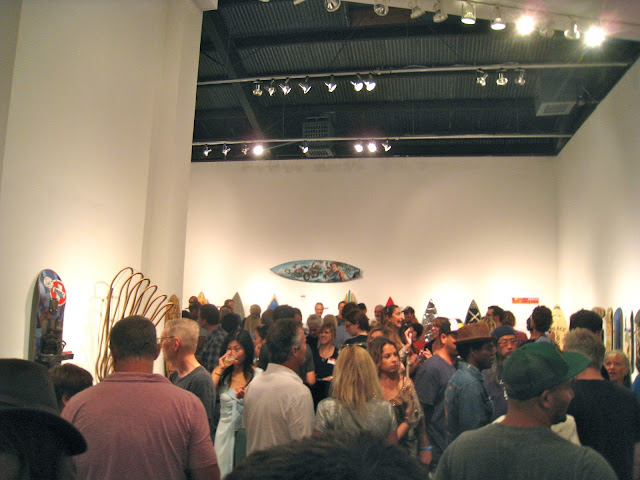 Some of the very best art around can be found on skate decks, as we all know, but the artists involved in this auction took it a step further in many cases, building up and off the decks, or making cool things out of the decks. I wanted pretty much every piece in the show ... some more than others. 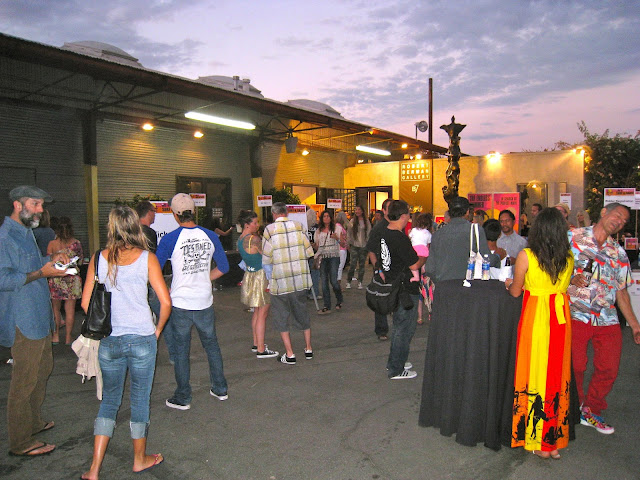 It was a lot to take in, especially when there were so many great people to see and catch up with. Many of the artists were present and mingling, sharing stories of surf and skate and art. 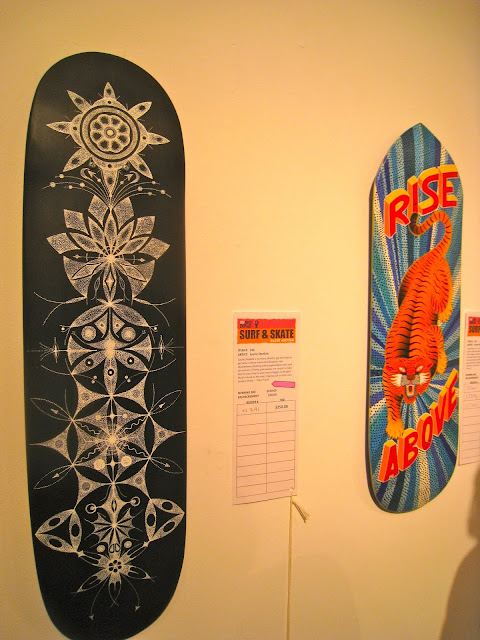 In other words, a perfect Southern California evening, considering wine and IPAs were also flowing freely. 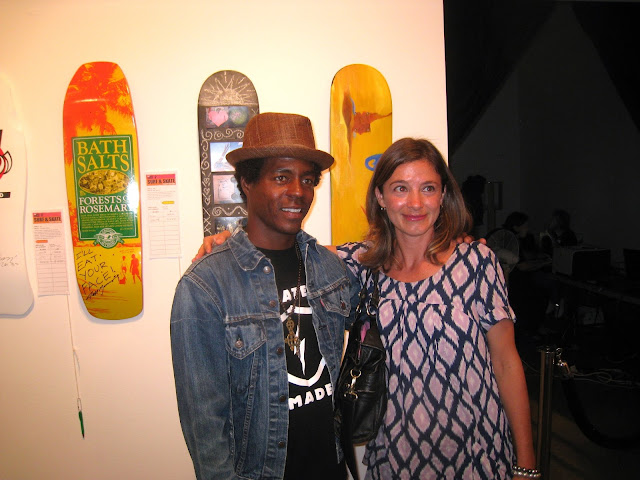 The sunset outside threatened to overshadow the art inside, but it faded soon enough. 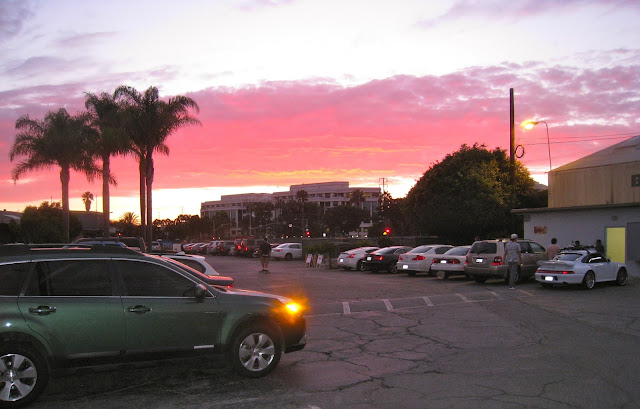 There were designs by Tesla engineering students. There were surfboards painted by father/son artists Ed and Andy Moses. 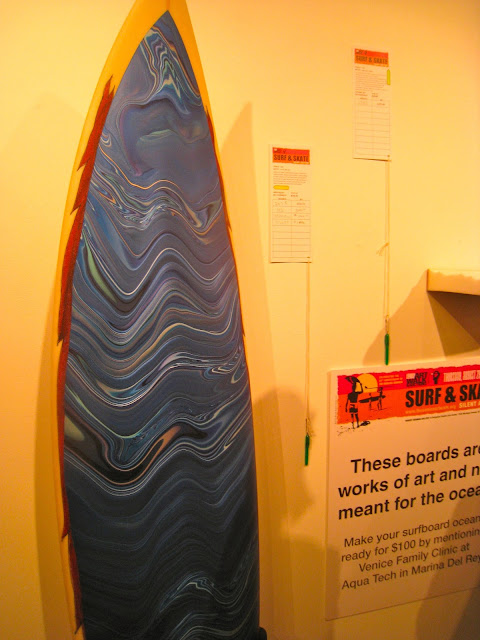 There was a non-surf-able board made out of concrete by Laddie John Dill. 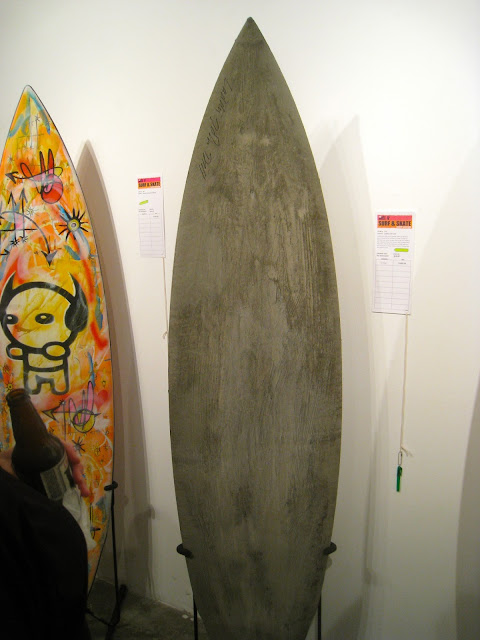 Husband/wife artists Neil Carver and Jennifer Wolf had their board creations hung side by side, beautifully. 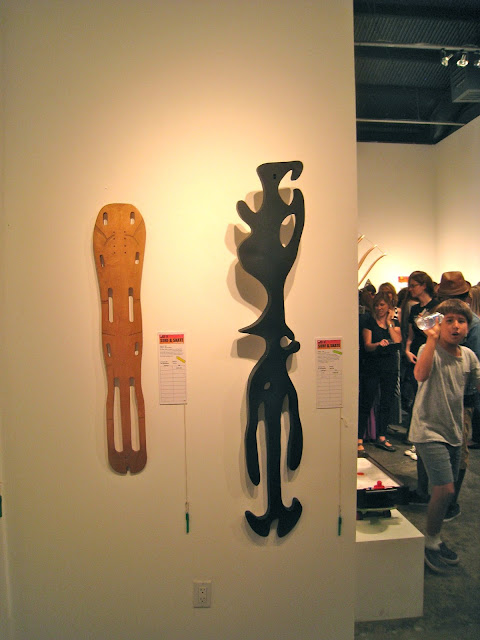 Venice artist Sephira Salazar had her cool chalk and photo board hung right up there with the Hosois and Hawks. 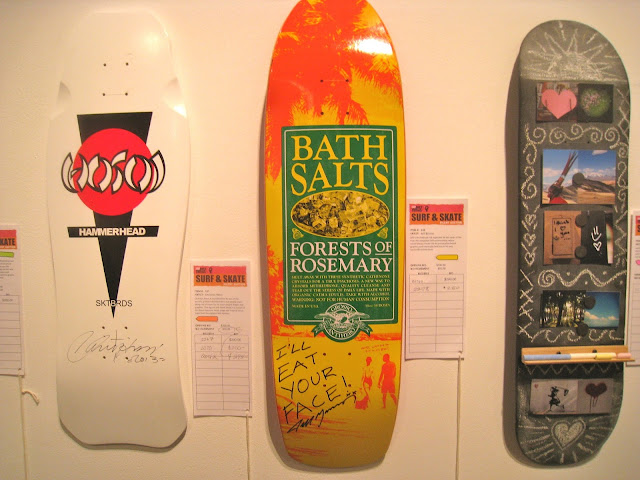 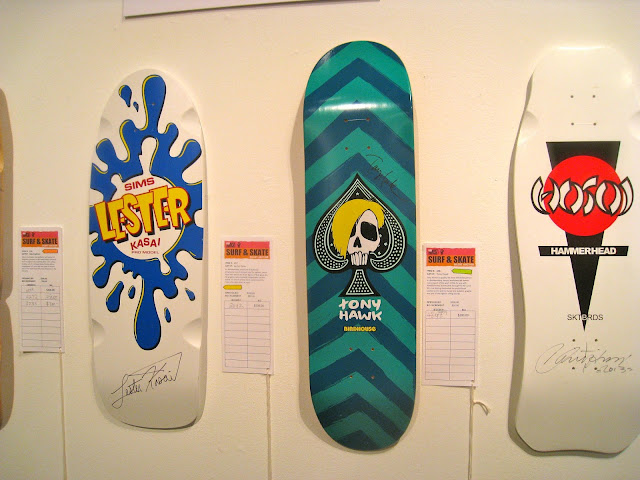 Tanja Skala made a first aid kit out of a board, which made me laugh and think about all the cuts and scrapes I helped tend to when we had a half pipe in my backyard growing up. Clever. 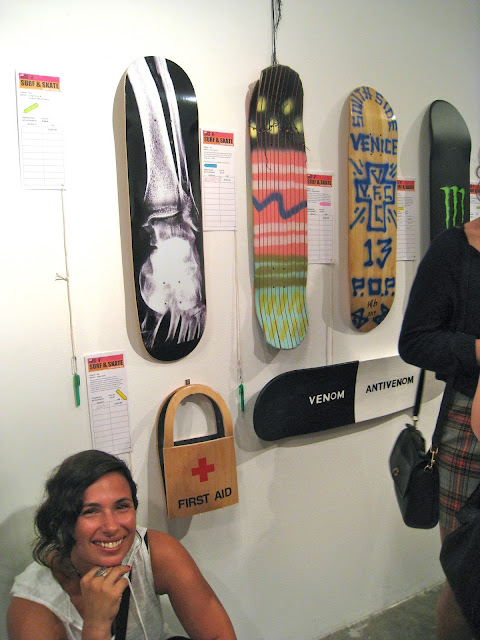 Some boards lit up, and some were so deconstructed you could barely tell that they had been boards to begin with. Love it. 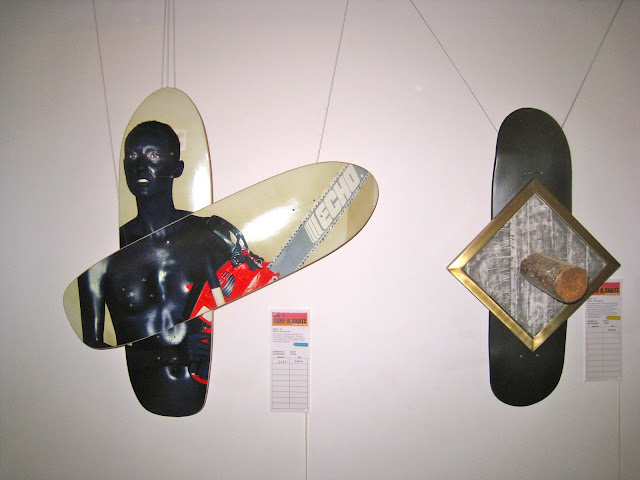 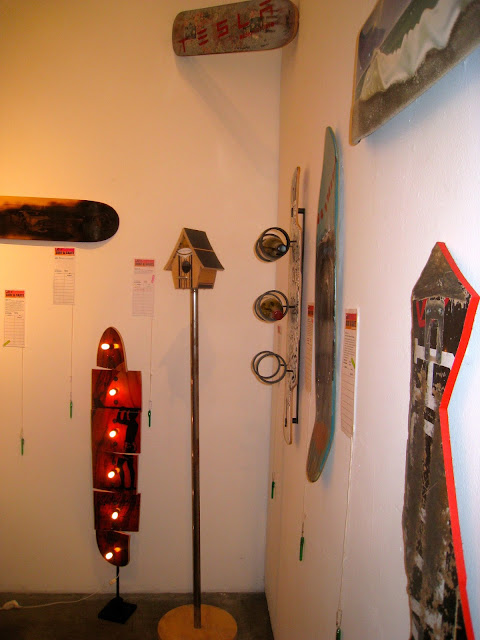 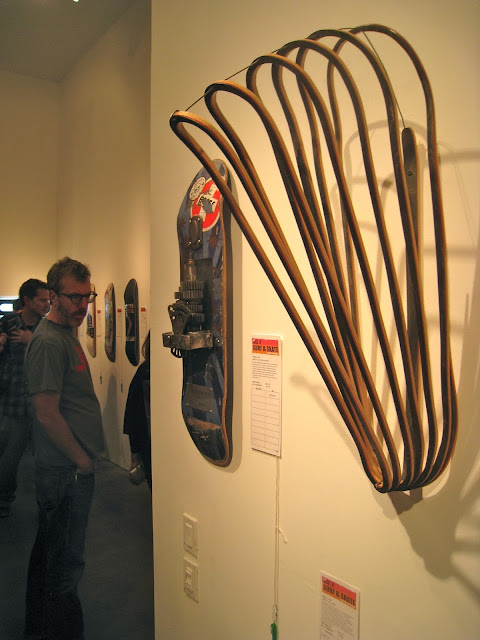 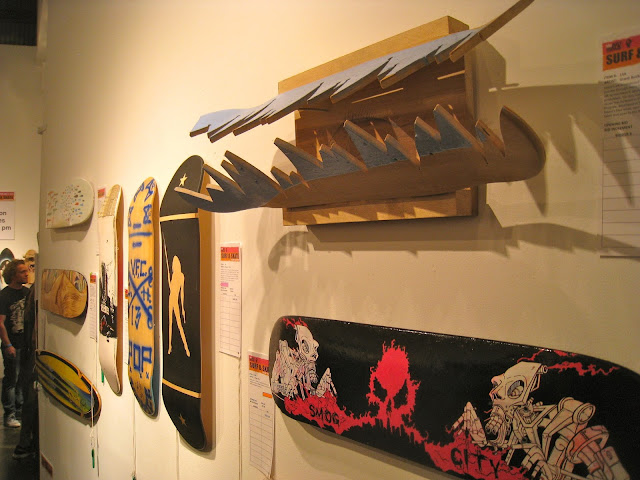 There was political commentary, humor, sexiness, and even plants flowing off the board by Big Red Sun. 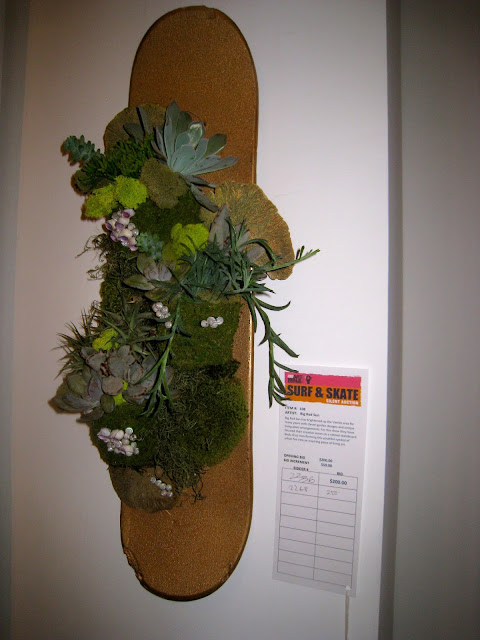 Pro skaters, surfers, and legends from both worlds talked shop and clinked bottles, anticipating their next sessions together. Happily. 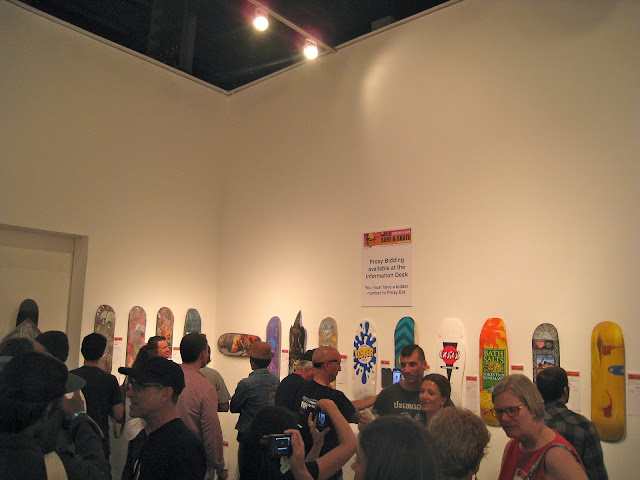 The centerpiece (and poster) for the event was the classic Endless Summer design by John Van Hamersveld, who I hung out and chatted with, so that he could know that his pink and orange poster adorned the bedroom wall of my Minnesota youth, and kept me going through the dark winters, knowing I'd someday be living out here. He gets told that a lot. 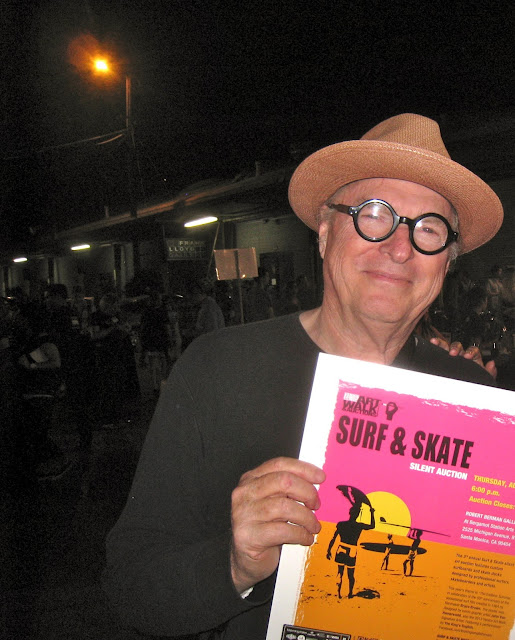 As people hustled to place their bids before the auction closed, there was already talk about next year's auction. Having seen how great it is for this work and these communities to come together (for GOOD!) to show off their creativity, everyone wanted to be a part of it next time. A true success, especially for the families that will be helped by the care given at the Venice Family Clinic. 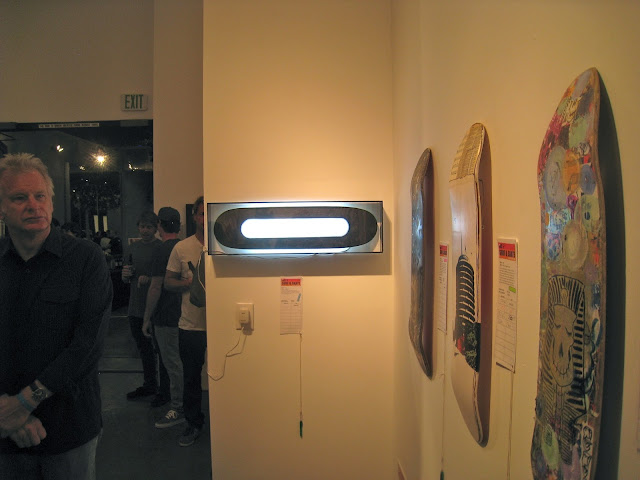 The excellent time had at the fantastic auction was only improved upon by a respite at Paco's Tacos, followed by the badassness of Jason Heath and The Greedy Souls at the Cinema Bar. 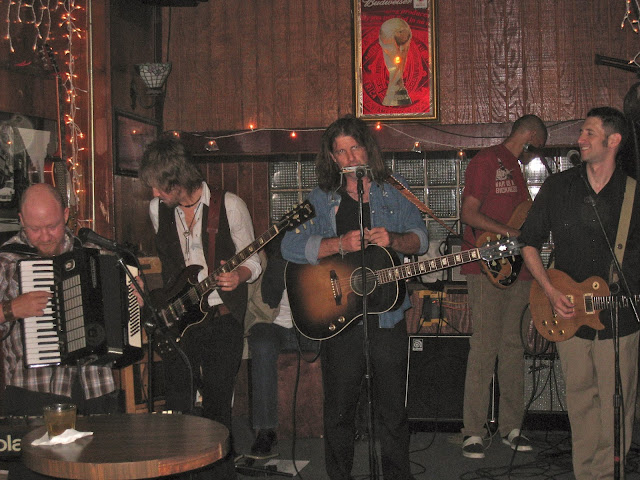 As it begins to wind down, we can be happy that here, we really do get to inhabit an Endless Summer ...