I just got back from checking out the last show at L & M Arts in Venice. As if to reflect my mood about it, the fog rolled in just as I walked in the doors to see Labyrinth, the sculptures of Nick van Woert. It was bittersweet, as I've spent a lot of time in this gallery, learning, appreciating and reflecting ... most often on foggy days like this. 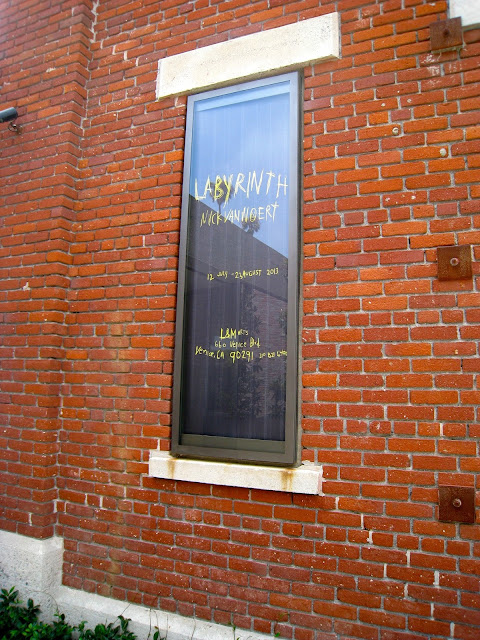 In the West Gallery, van Woert has a series of wall sculptures modeled after mappae mundi - the medieval maps of Europe. Bronze casts of basic tools, like hammers and arrowheads give it all a feeling of the history of man, and the ways in which we got to today. 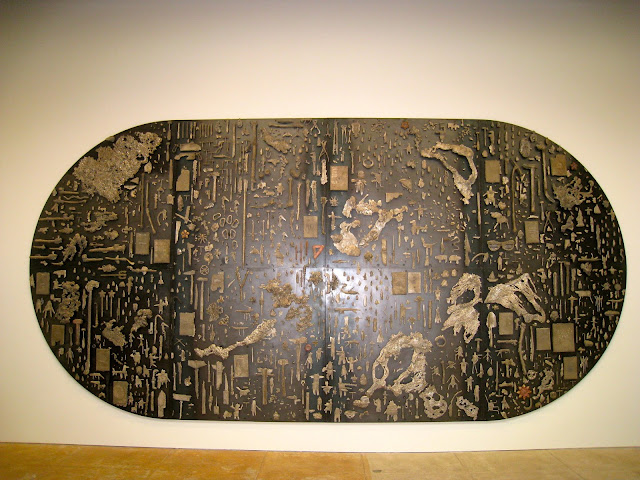 In the big main piece, Not Yet Titled (2013), van Woert made up his own personal history. According to the press release, "This large sculptural lexicon is the sum of the artist's influences and ideologies. It includes casts of relevant books, childhood toys, peace pipes, and other meaningful objects that, together, helped to amass his character." Cool. 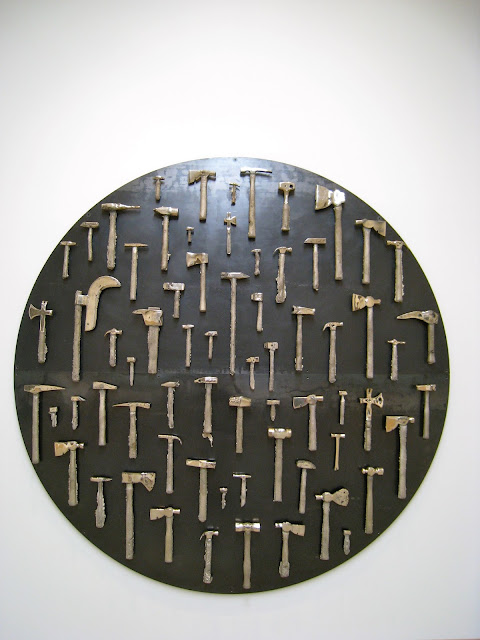 The work builds "a link between seemingly antiquated notions of construction, industrialism, and sustainability amidst shifting societal values and consumer demands. 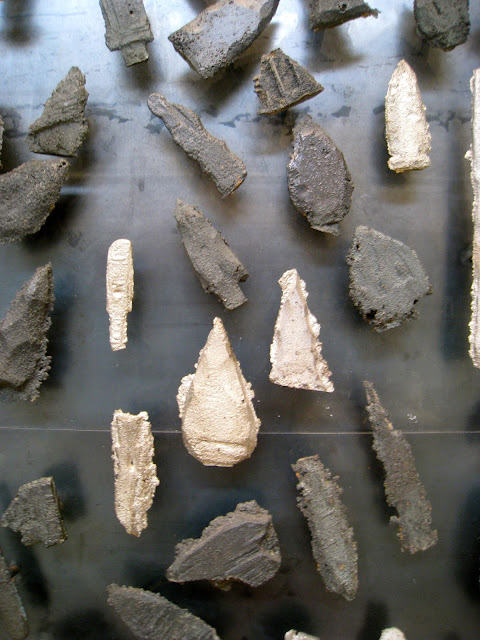 The West Gallery is all serious and tangible feeling, heavy with permanence. 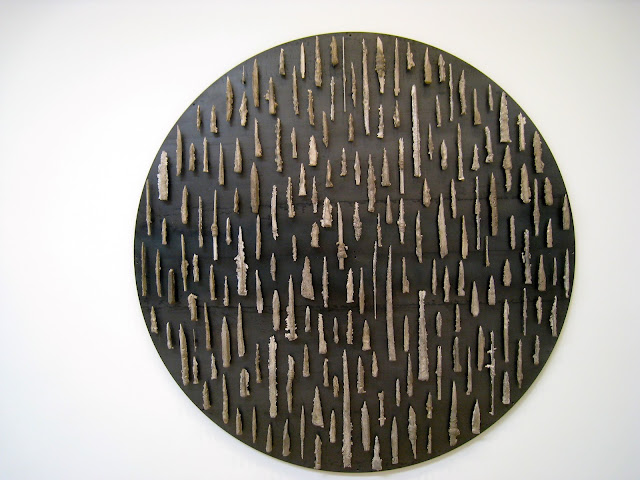 In contrast, the East Gallery houses the title piece, Labyrinth (2013), a maze of plexiglass boxes that contain, well, junk. Plastic, man-made junk. AstroTurf, pinatas, aquarium rocks, a hot dog, dirt, cat litter, fabric, what have you. This gets a little into the territory of "What is art? Anyone could do that!" To which John Waters famously said, "Then you should." Right on. 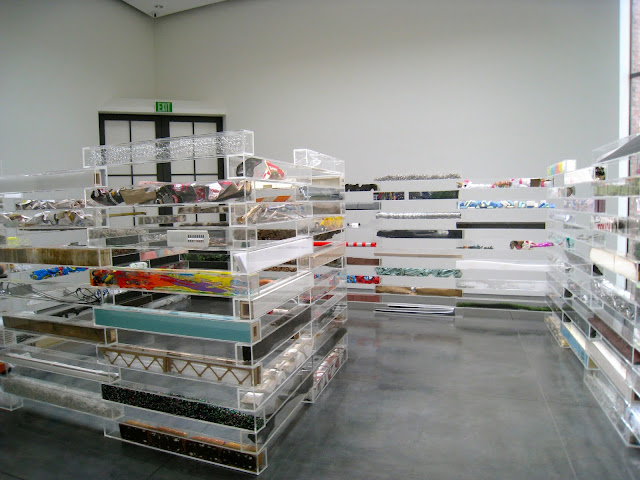 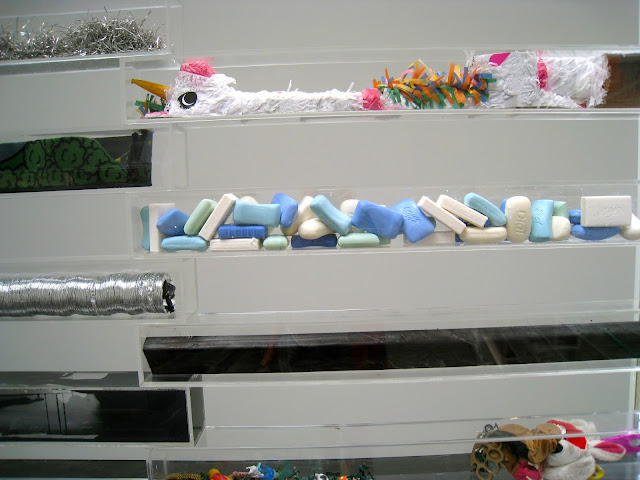 Interestingly, the press release - and thus, van Woert, acknowledges exactly that, saying his sculptures "are ammunition for a material revolution that rebels against the dividing qualifiers of 'fake' and 'authentic'. Selected for individual traits, rather than an ability to replicate the favored materials of antiquity, van Woert engages the inherent aesthetics, palettes, and textures of each material he chooses ... His work challenges us to become increasingly aware of the artificial concoctions that populate our contemporary habitat." In other words, art is everywhere. 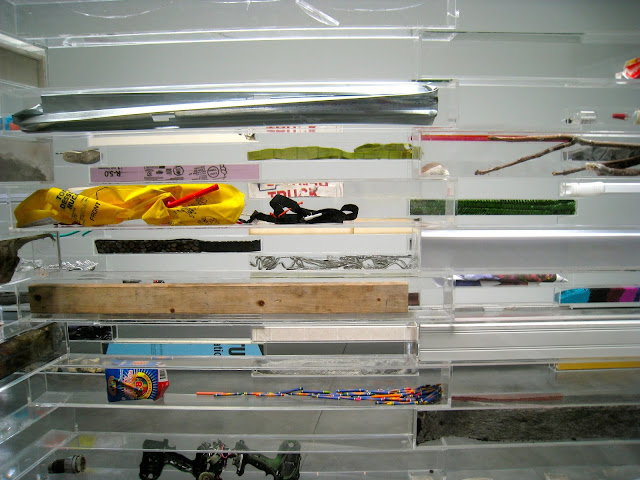 I loved these moments of solitude, just me and the creativity and ideas of the artists shown at L & M Arts, thinking and understanding. The Gallery closes its doors for good on August 23rd. They will be fondly thought of and most assuredly missed. Thank you for the beautiful time you spent with us here in Venice. And thank goodness art IS everywhere here.
Posted by CJ Gronner at 3:29 PM