Lollapalooza! My favorite. This is one great festival, and I'm SO excited to be here in Chicago again, checking out seemingly every band that exists in the world today (or pretty close). Again the extremely grateful and thrilled guest of the Farrell Family, I get to see how it all goes down, in front of and behind the scenes. Awesomely. 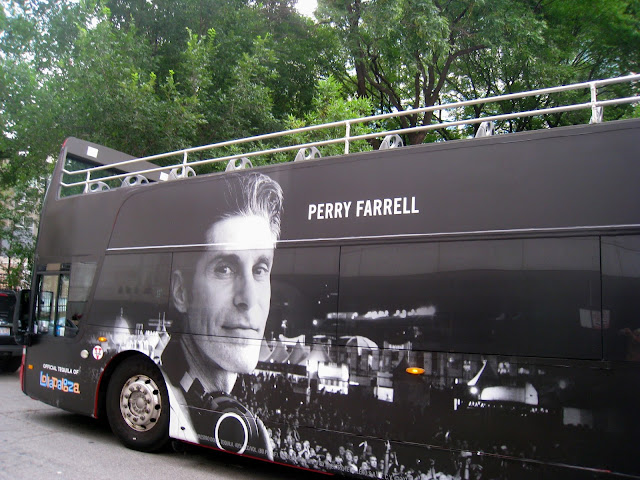 We met up to toast the first day with champagne and get our little "Perry's" temporary tattoos that got us into the cool areas. Then it was all aboard the big double decker Dobel Tequila bus emblazoned with Perry's giant face to take us over to the Lolla site. Not a bad ride, as all the friends and family caught up and enjoyed the Lake Michigan breeze up on top. 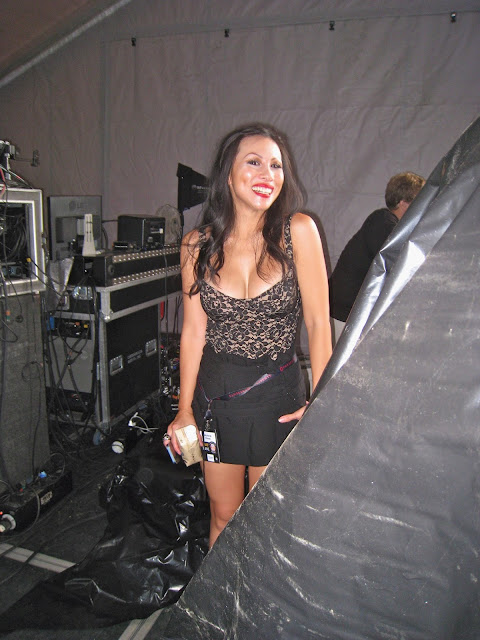 More catching up (and maybe a little partying down too) in Perry's compound meant that I once again missed a bunch of bands, but it's fun to hear all the music filtering in from the various stages, feeling the excitement build all day. 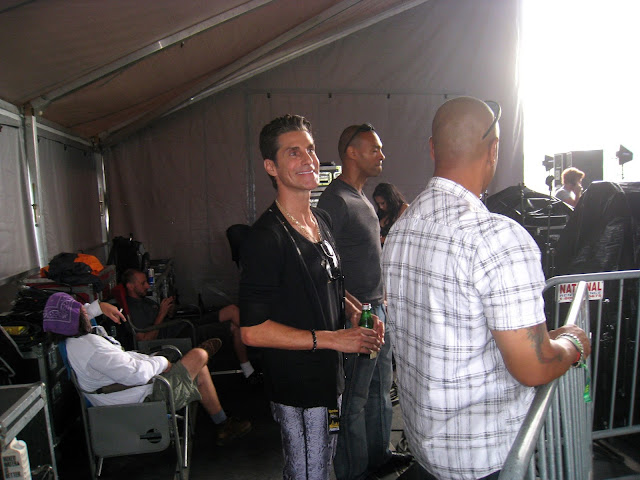 Perry and Etty Farrell are hosts of the country's best party this weekend, and they make sure everyone is having a massively good time - the whole time. There are not enough thanks for them. THANKS! 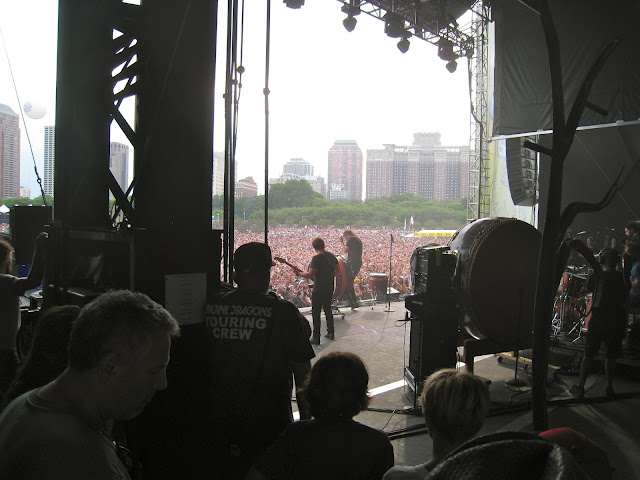 I heard a little Father John Misty and Band of Horses and Chance The Rapper on the fly - sounding fantastic - and then we gathered up a full infantry of troops and golf carted on over to see Imagine Dragons, who had their crowd yelling and moving the whole set. 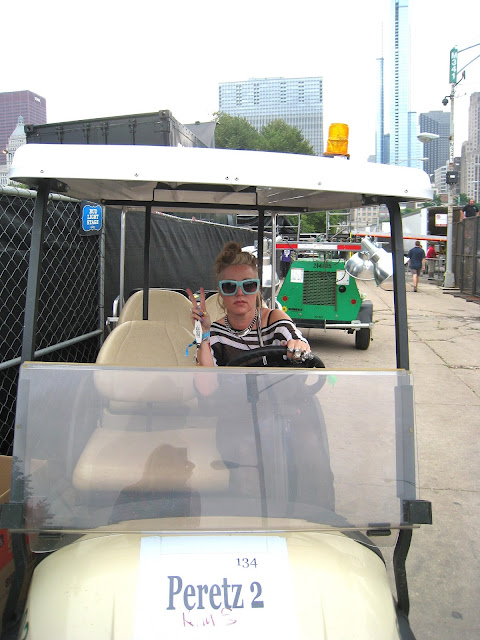 There is always so much to see and do that you kinda gotta keep moving to even scratch the surface. 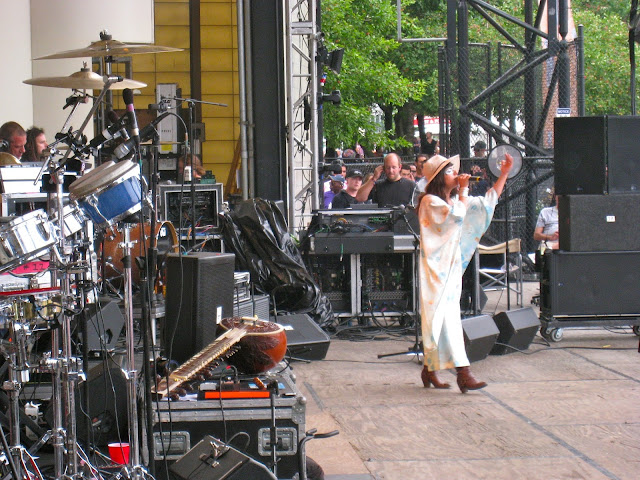 So we were off to see Thievery Corporation with the gang, who ruled it, and got the approval from Perry as they had their faithful wildly dancing and loving it. Even the little kids got into it. 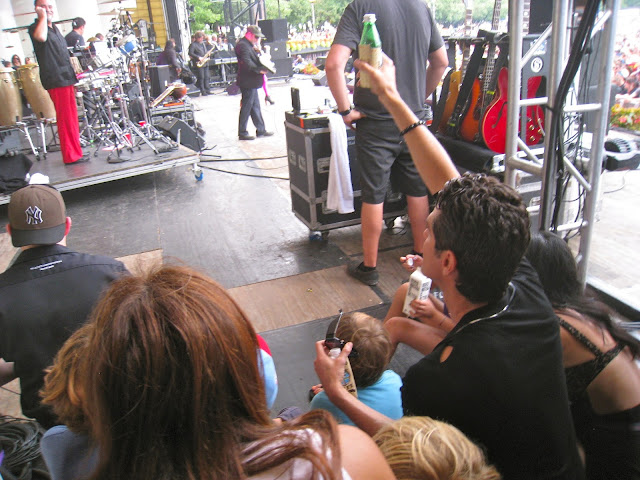 Grey skies threatened the whole day, but we never had to really deal with it, thankfully. It just looked all cool and dramatic, which is exactly how Queens Of The Stone Age handled their MONSTER set. 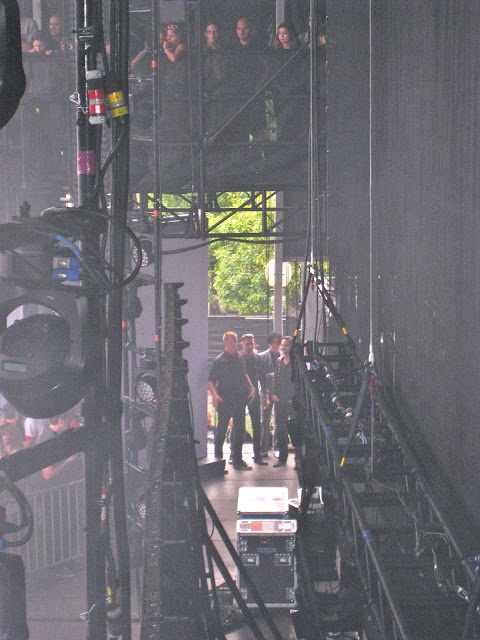 I love this band. They simply SCORCHED the already hot Lollapalooza audience, who were out of their minds for every song (I know, because I was, and thus, could recognize it well). 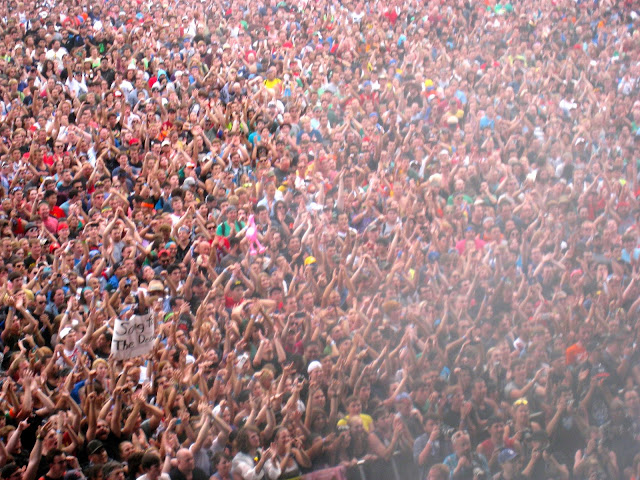 They played a slew of tunes off their new and epic Like Clockwork ... album, as well as bunch of fan favorites that had people going OFF. I saw guys air guitaring and drumming all the way back to the back. I mention the air DRUMMING because Jon Theodore's drumming was a true pummeling of monster rock proportions. I'm biased because we're friends and I adore Jon Theodore, but I'd say it if I'd never heard of him. He was an animal, and held the whole beat down DOWN. Barefoot. GO JON! 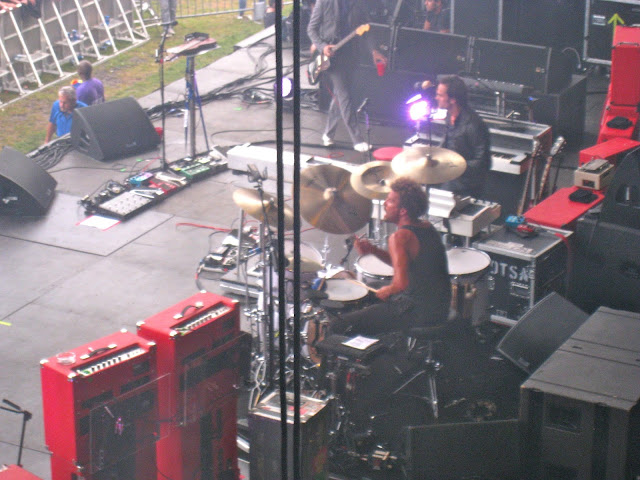 Josh Homme is one of those front men that are riveting to watch, because he just so confidently HANDLES the rock. 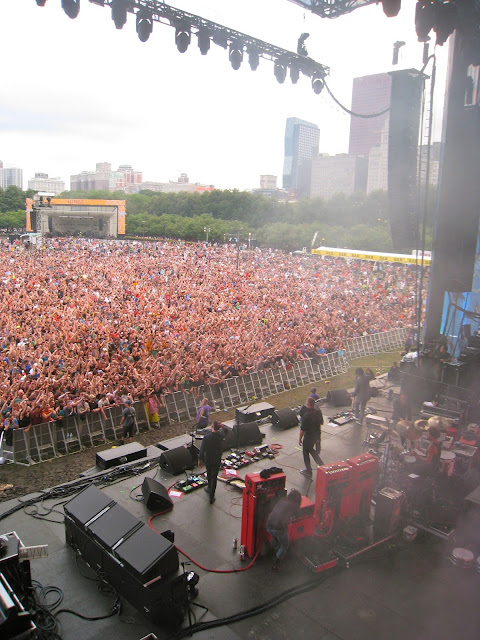 The songs are super interesting and hard and there was a point where the balcony we were watching from truly felt about to collapse. It would not have been a bad choice of final moments though ... honestly. 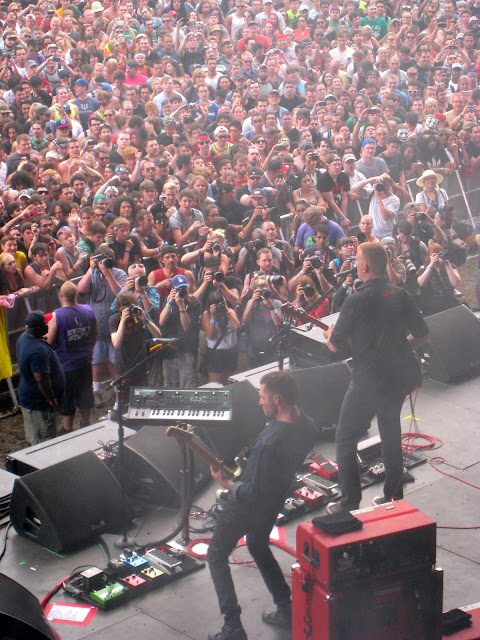 The set list was perfect and featured a deafening group singalong on "I Wanna Make It Wit Chu" that no one will soon forget. The sun set on their stage, creating a completely perfect show. 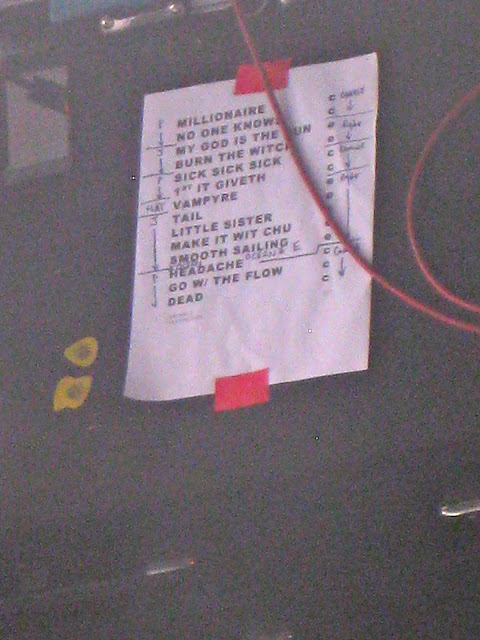 I can't say enough great about QOTSA, so I'll just let you dig them yourselves the very VERY first chance you get. You will never have a regret about it, but you might lose your face in the mayhem. 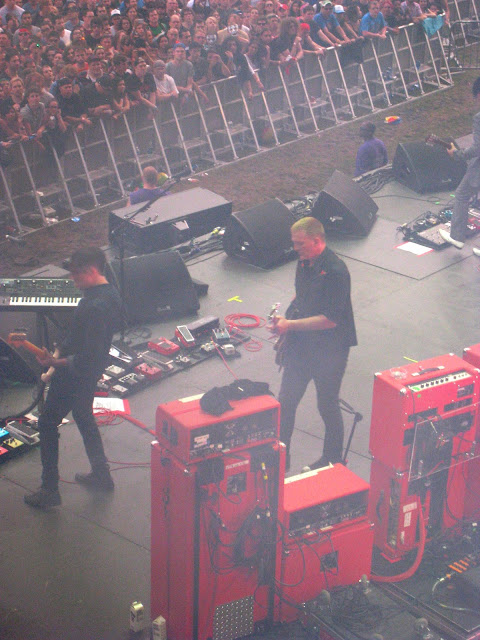 Mayhem is also an apt way to describe the set and the crowd for Nine Inch Nails. Whoa. Dark and ominous as ever in their first U.S. gig since 2009, Trent Reznor and his guys debuted some new songs ("Copy of A"/"Come Back Haunted") as well as classics like "Sanctified", "Head Like A Hole" and "Piggy".  At this point it was crucial to just enjoy and not try to take crappy photos. Sometimes you just have to LIVE it. 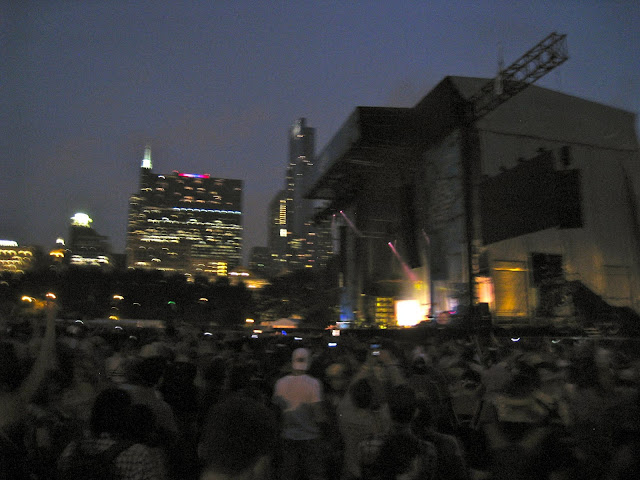 The Chicago skyline had grown dark by now, and as we mixed in with the rabid crowd, a lone firefly flitted around over our heads. It was kind of magical, like hope itself persevering amid the darkness and doom feeling of the music. That fact that whatever the tone of the music was, its very beats made the crowd so happy, it also felt like hope. 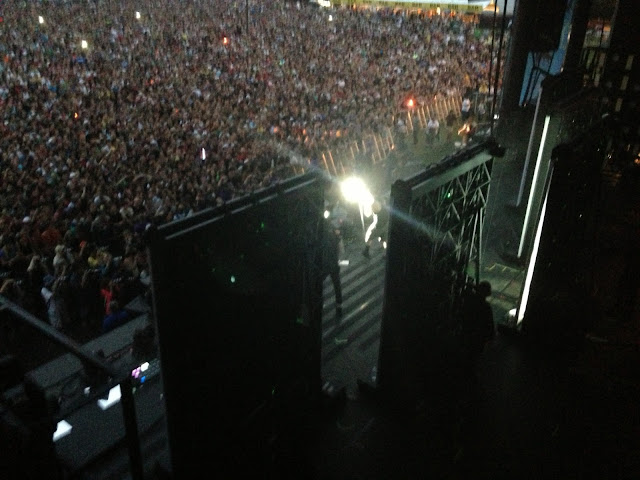 The Killers were ruining the other end of the slightly muddy Grant Park at the same time, so we only caught the tail end of them by leaving Nine Inch Nails early, but I could tell that they had brought the same hope and happiness down at their end. As did Steve Aoki at Perry's Stage. Man, there is SO much to do and see at Lollapalooza that you want to clone yourself, but you just do your best.

After all of this, we had completely forgotten to eat, so it was with pure joy that we discovered back in Perry's trailer giant trays bearing the now classic don't miss lobster corndogs. Aka lifesavers.  Fortified, we blended in with the happy music lovers streaming out of the park and out into the Chicago night to see what else we could get into. Before doing it all over again today.

Tra la LALAPALOOZA! Loving every minute of it.