The third and final day of Lollapalooza 2013 got off to a verrrrry slooooow start. We went BIG Saturday night, and as a result, needed a slight break from pounding amplifiers and crowds. Bummer for the first half of the day that I can't report to you about, other than to say it looked really nice out. 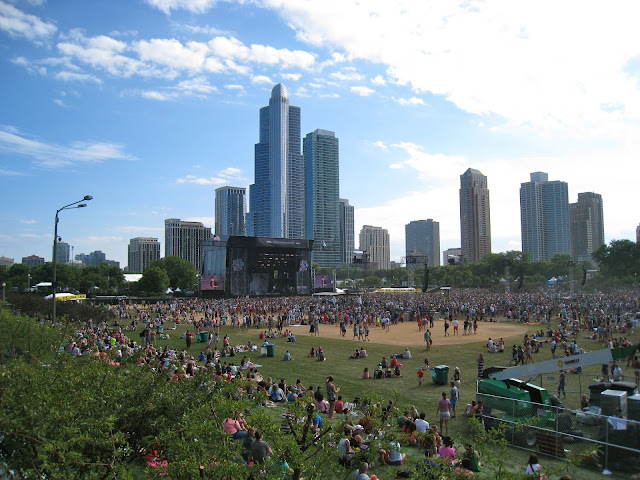 And it was. Lolla goers are party people, let me tell you, and as I arrived back on site in the afternoon, everyone was still going hard. It's a stamina thing, for sure, and all the folks in Chicago were UP for it this year, no question. Every stage was packed. Every line was long. Every smile remained big. 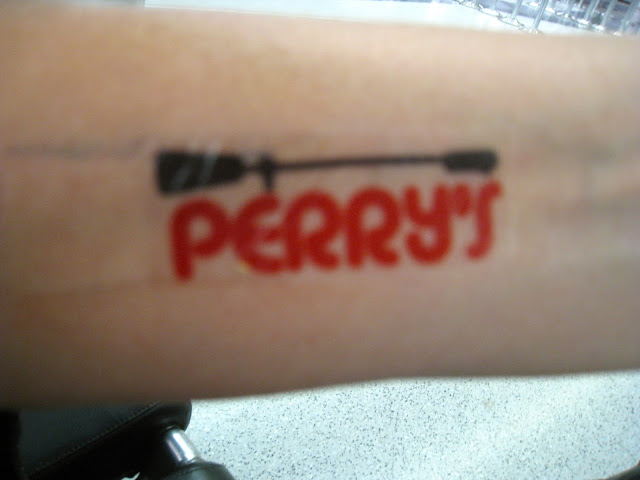 I saw a little of The Mowglis on my way to the Perry compound, where I caught up with the gang that was all in a similar state of regrouping before we charged back out again. Coco Cafe is our good good friend. Shout out! 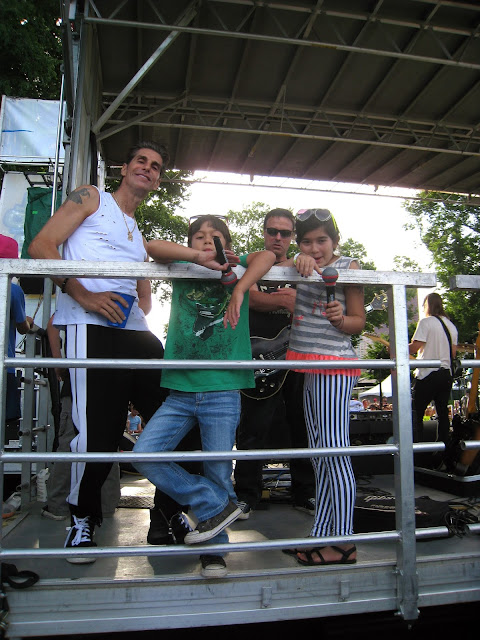 On my way back out I caught a little Wavves, The Vaccines and Tegan and Sara. It's interesting to watch the crowd stream from one stage to another when one act ends, like time lapse in real time. 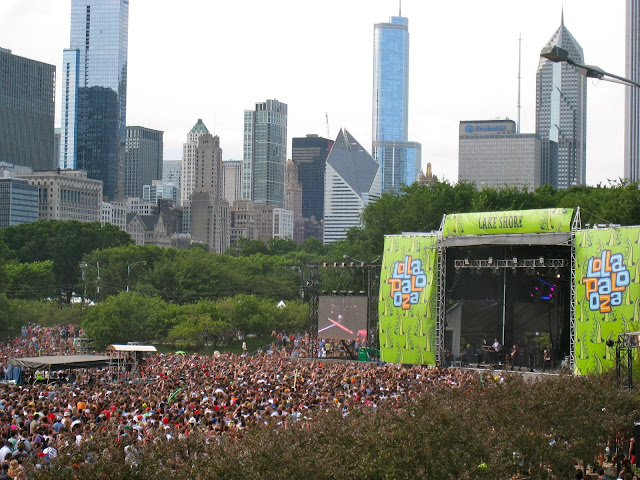 We had never really checked out the VIP area (different than Perry's - you can buy your way in there), but thought it might be a nice spot to ease back into it all. 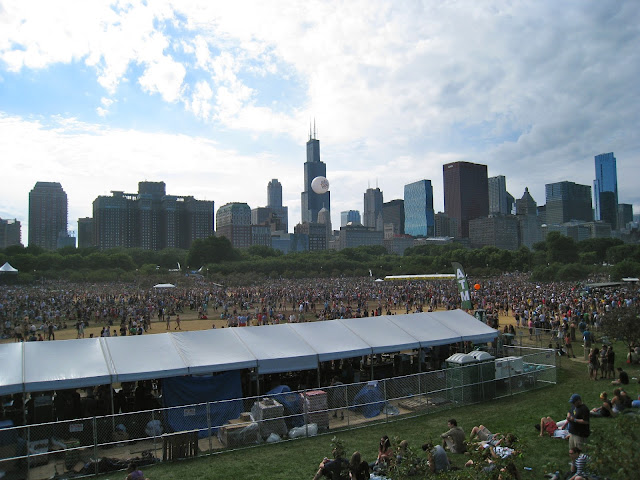 They had chaise lounges and comfy benches that you can watch the action at from kind of a remove. From there we caught Alt-J, who were throwing down better than we were at this point. We also caught brief moments of Grizzly Bear and Beach House, who were dreamy and ethereal sounding, making me still a little sleepy. 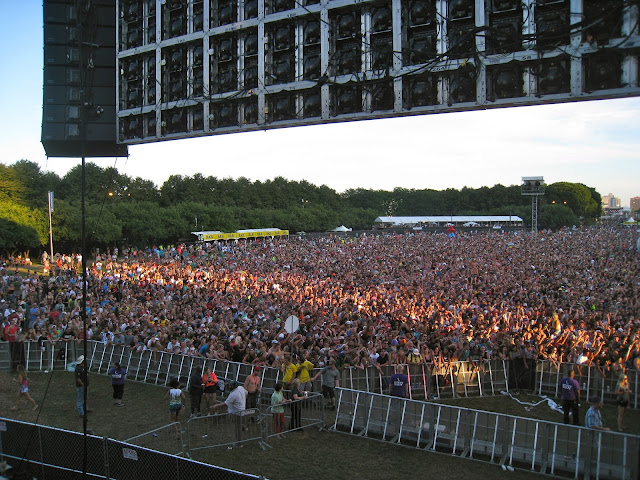 But that changed when we caught the tail-end of Dog Blood (Skrillex and Boys Noize) who had their faithful going supercrazy. The whole front row went down at one point, only to help each other spring back up and start jumping up and down again. That was me for Major Lazer, who were AWESOME. 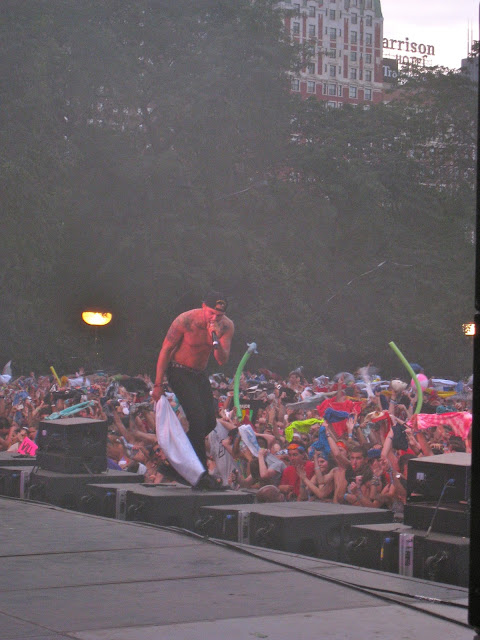 I like them because they throw in the dancehall with the dance music, giving it a bit of a mellow vibe even as people are losing their minds in an anything but mellow fashion. Diplo was out front with some dancing girls and when they did "Shirts Off", pretty much every shirt did come off and wave in the air. (I had on a dress or I too would probably have complied). 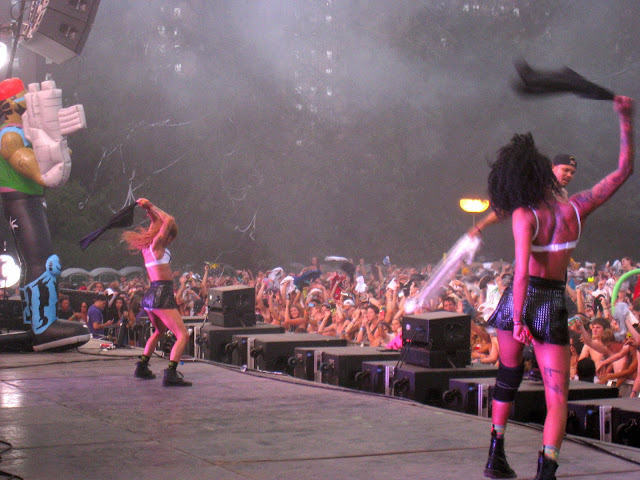 Their crowd LOVED every frenetic moment of it, and it took about one hot second to get re-energized yourself while watching them. Major Lazer is for sure one to catch when they come to your area. I still feel hyper just thinking about it. 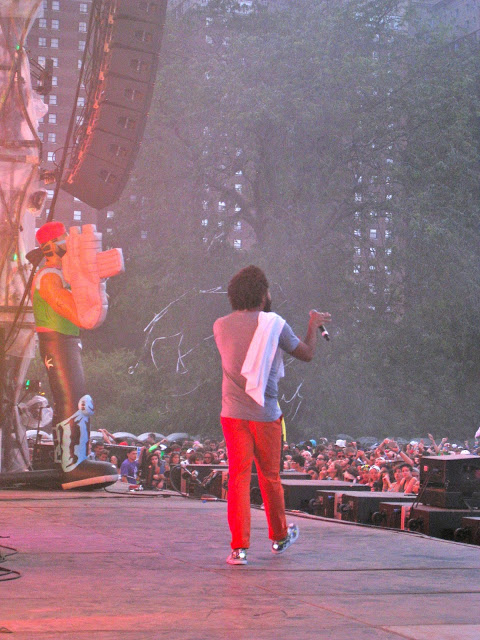 The little kids in our entourage all wanted to see 2 Chainz, but that was when I wanted to see Major Lazer, so I opted out of that expedition. The review, per Hezron Farrell, was "AWESOME! A girl took her bra off, a guy climbed an electrical pole, and a man crowd surfed in his wheelchair." 2 Chainz high-fived Hezron's little friend Vernard, who claims that his hand will never again be washed. That's a pretty good referral, so I'll have to catch him next time.

The big choice for most on this final night was Phoenix, Cat Power, Knife Party or The Cure. For us, there was only one place to be - The Cure. Any chance to time travel back to college, you should probably take, though many in the audience didn't look college-age yet. Robert Smith himself looked like a crazy older lady, but he sounded exactly the same. Exactly. When they opened with "Plainsong," it was like listening to it on the radio back in the day. 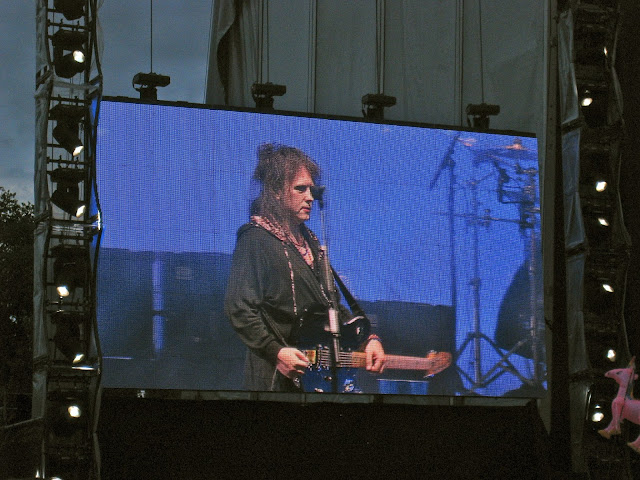 The place went absolutely wild. Since it was the last act of the whole weekend, we went out into the dead middle of the mix to really soak up the feeling of the crows and place. I'm not sure it was the best decision, as after a while, The Cure songs can be a bit sleepy. When there's no way to move or get out, you just dig deep, close your eyes and meld your memories into now. 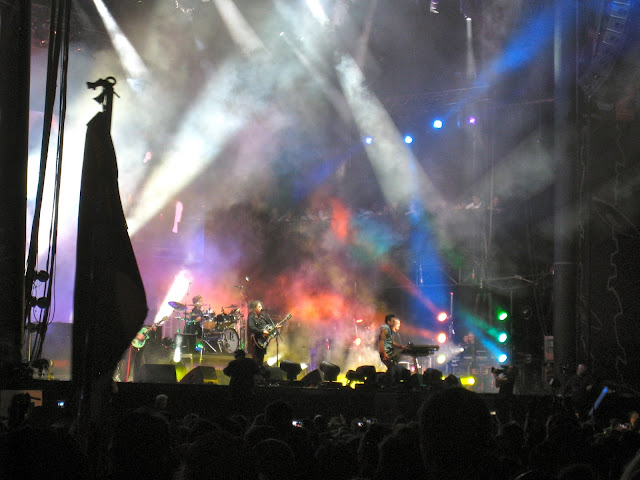 "Pictures Of You". "High". "The End Of The World". "Love Song". (Gigantic singalong) "In Between Days". "Without You".  Huge crowd pleaser, "Just Like Heaven" was excellent, and was made even more so by watching the awesome sign language lady act it out. She was on FIRE. "The Walk". "Friday I'm In Love". They played all the hits, back to back, storming through them all like it WAS yesterday. 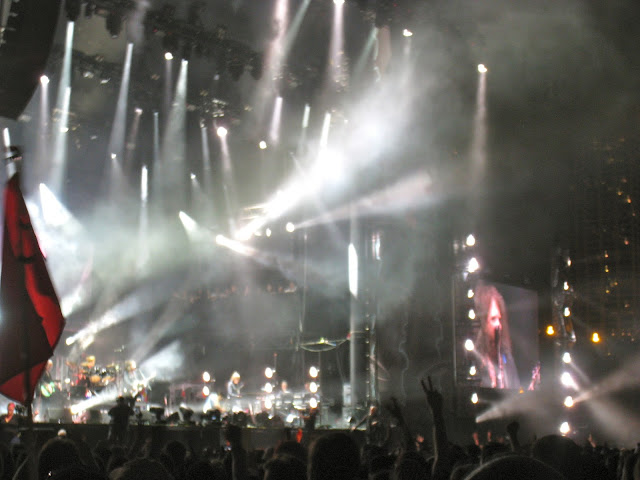 At this point, the sky dark and the night chilly, we threw in the towel for being in the middle and battled our way back to the bleacher zone to warm up and listen in comfort for a bit before heading back to the Perry compound to compare notes from the other stages. 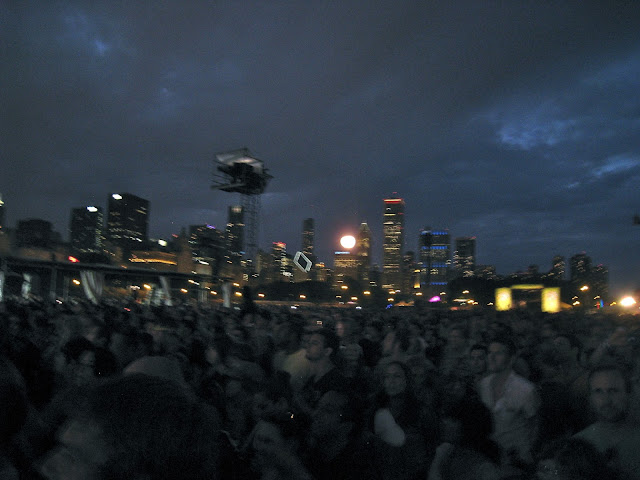 A BBQ was served and we all celebrated another SMASHING success of a Lollapalooza year. It's an epic feat, a massive undertaking, and it is done with such grace, style and well thought out planning, that it would be very hard not to enjoy every part of it. What Perry Farrell envisioned back at the beginning of the 1990s is not only still one of the biggest happenings of the year, but one of the best, that just keeps on getting better. All kinds of musical genres. All kinds of people. All coming together to celebrate their love of MUSIC. What an absolutely beautiful thing.

SPECIAL thanks again to the Farrell Family for everything, thank you to fun and gorgeous Chicago, and to Lollapalooza 2013 for going down in the books as one blast of a long weekend. Until next year ... August 1, 2, 3, 2014! Plan on it.
Posted by CJ Gronner at 2:07 PM