Queens Of The Stone Age blew apart the Gibson Amphitheater on Saturday night in L.A., which was fine as it's about to close and be turned into a Harry Potter ride. Yep. It's sad to see the place go, as it has been one of the few places in town where pretty much every seat was good. If it has to go, this was the show to have in your memory as your last here, for sure. Every single mind was blown, and every single face was rocked off. Happily.

We missed the openers as it's L.A. and there's freeways closed and you fight your way through all the tourists roaming around the chain stores to get to the venue. Also, we're slow. There was just enough time to get one last $18 dollar drink (It's the very cheesy Universal Citywalk, after all) before the lights went out and the people started yelling their lungs out. We'd made friends with everyone around us, so the atmosphere was extra festive. 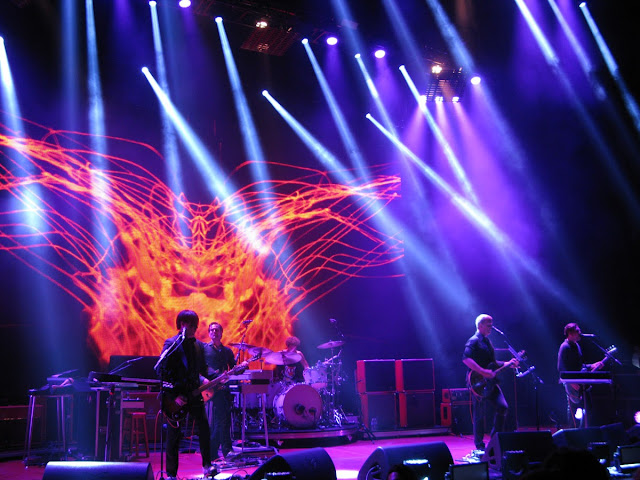 The fans started losing their shit as soon as they saw the QOTSA guys and the windows on the video screen started breaking. Mayhem erupted as soon as they TORE into "My God Is The Sun" and it never once let up for a split second the rest of the show. I'm not kidding. I don't know how they/we do it. The rock is relentless.

You again saw air drumming all over the room, as Jon Theodore is exactly that fun to watch, and for some, to imitate. For "No One Knows" the place started clapping along spontaneously, to which Josh Homme said, "Hello, Los Angeles! It's goddamn good to see you! Clap along ... you won't look like a fool, you'll look like someone who gives a shit." Exactly. 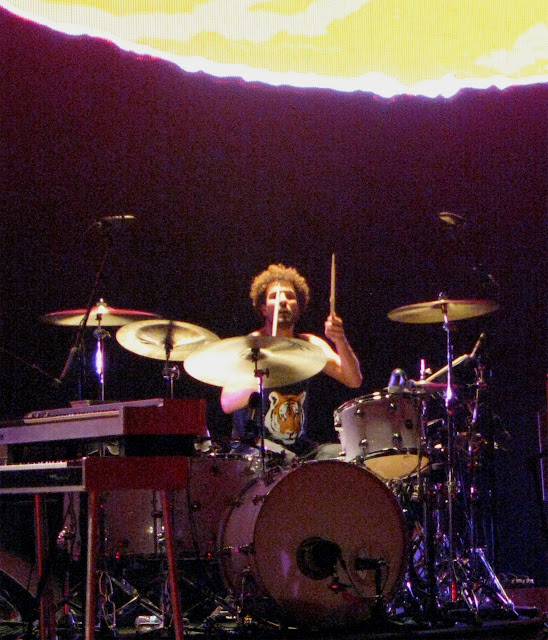 It would be very hard indeed to NOT give a shit about music this good. At various points in the show I could compare Queens to Zeppelin. Pink Floyd. Plain Queen. With no hyperbole at all. This is a legend band like that, but for NOW. Super tight - "Tight" being the word I overheard most often from the rockers around me. They're just flawless musically. We were talking on the way over and I said that the latest album ... Like Clockwork is like Appetite For Destruction in that every track feels instantly classic and there isn't a single one that you want to skip over. Classic like no one's business. 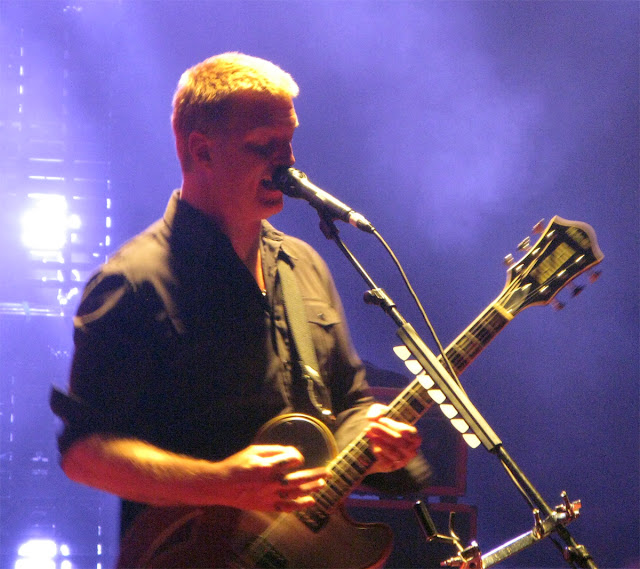 Mr. Homme makes it his business to run the show exactly like clockwork ... Hard as hell, then lighter for a power ballad to give you a half second to breath, then right back to the head thrashing desert metal sound that they've created, and made all their own. (I'm gushy, but I don't care, I love them.)

... Paul's sister is an alien, Oh well ...  has always been a favorite lyric of mine, as I am Paul's sister. The Alien bit remains to be seen ... "Monsters In The Parasol" was a big hit with everyone, but then so was every song. The lush and lovely "Kalopsia" was dedicated to "an old friend", and was extra gorgeous, sounding even better than as recorded. Big waves played on the screen as they lit into "Like Clockwork" the song, with Troy van Leeuwen's very Pink Floyd monster guitar solo. Played in a suit and tie - the whole hot time. Yikes. They are LEGIT. 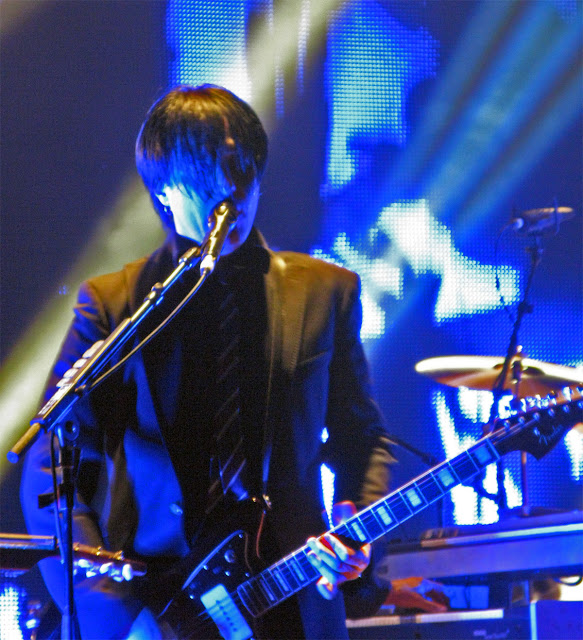 "This is a song about who I wish I was", said Homme to introduce "If I Had A Tail", a total crowd pleaser with its "Da Doo Ron Ron" chorus that no one was shy to sing along with. There was exactly zero seconds between that and blasting right into the old favorite, "Little Sister". Right on the heels of that these monsters of rock blazed through "Smooth Sailing" and I was again reminded of how Josh Homme reminds me sometimes of Elvis. The way he shakes his hips when he plays guitar, and the way he pretty much just says, "Thank you very much" between songs. The King - of the Desert? 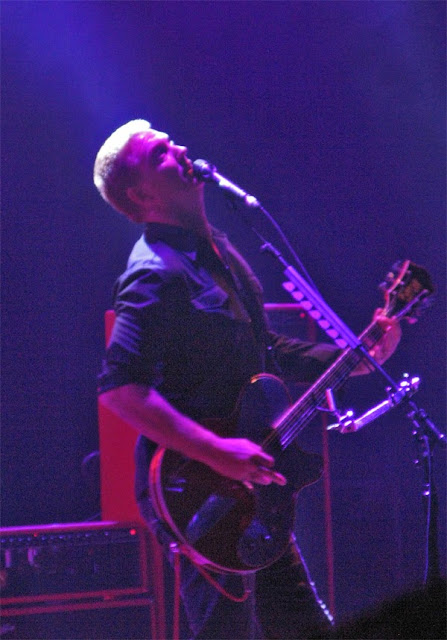 "Is everyone having a good time?" The roar implied yes. "Here's a love song, played really fucking good!" Well, Homme was certainly right, as they played "Make It Wit Chu" awesomely and every single person sang along. And meant it. The guy behind me was on the fence about getting another beer, to which I told him OF COURSE he should. This is a rock show! And not just a rock show, but a Queens Of The Stone Age rock show. Have a beer! "The end is really fucking nigh", after all, if we're to believe their video screen. Enjoy yourselves!

"Unbelievable!" "I'm so happy right now!" "He could only be a rock and roller." "EVERY song is good!" These were just a few of the things I overheard around me at this point, and was proven more than true as QOTSA then ripped up "I Sat By The Ocean", "Better Living Through Chemistry", and "Sick Sick Sick". At this point, Homme stopped to introduce the band, saying, "We're N'Sync!" Hardly. After Homme, the loudest cheers came for my homie, Jon Theodore, on drums. He deserved them too, as he beat the living shit out of his kit and impressed everyone minds in there for life. Ask them. 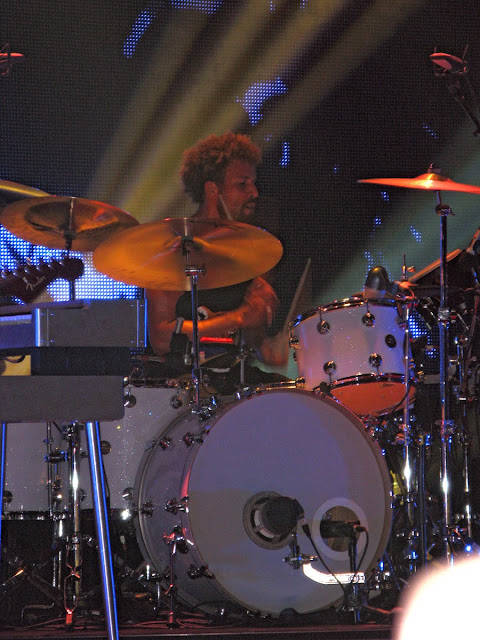 They closed out the regular set with "Go With The Flow" - as everyone had been doing all night long. The fans wanted an encore and let them know it. If you could still hear at this point, there's no way you could after being subjected to the crowd roar. I'm guilty of splitting a few ear drums of my own with my power whistle. I can usually tell a great show by if I'm hoarse afterwards. I was. 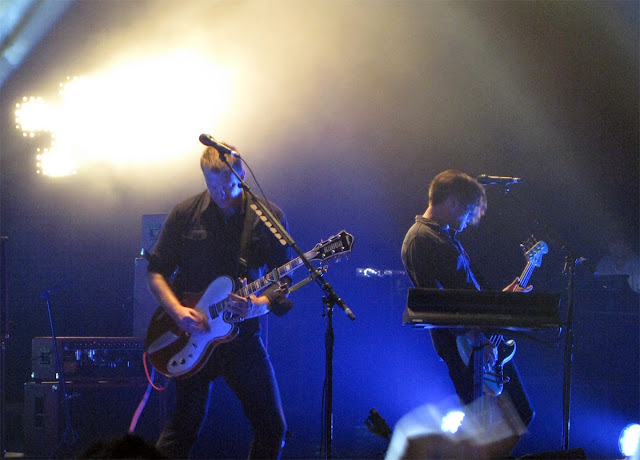 The excellent encore began with "The Vampyre Of Time and Memory", another Floyd-ian super jam. "Does anyone ever get this right?" goes the chorus and poses a really great question that I do not know the answer to, like a good song should. "I Appear Missing" was more great rock that no one in there wanted to end, but then Homme said, "This is IT! Whip out your dicks! Let down your hair! Take out your vaginas!" ... and I think more than a few probably did so, to get down with the last song, "A Song For The Dead". 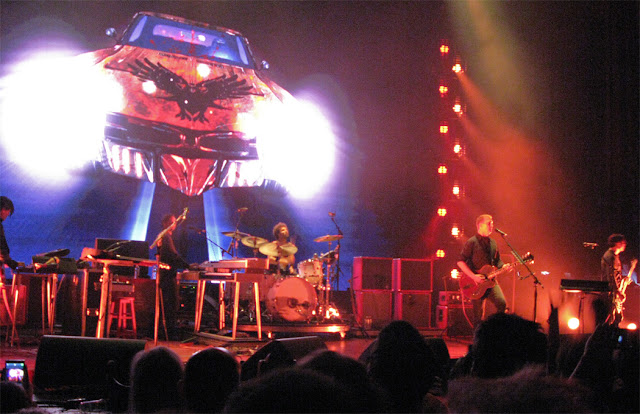 Maybe they were talking about those gone before us, or about the about to die Gibson, but it didn't matter because this show was about being wonderfully, gloriously, rocking out ALIVE. Yes. And I'm writing about it, because I can't talk. That show was one for the books. Do absolutely whatever you must to get out to see QOTSA on this tour. It will be one of your all-time classics.