In 2007, Billy Bragg founded the Jail Guitar Doors organization in England, named after The Clash song about Wayne Kramer of the MC5, who served time for cocaine offenses, but Bragg didn't know it was about Kramer. In 2009, Bragg and Kramer met up for a show at Sing Sing prison, and Kramer both told him he was the song's namesake, and decided to start up Jail Guitar Doors USA. They give guitars to inmates, who then learn and have a skill to use - even if just to make themselves feel good and express themselves - when they get out of lock-up. After many shows in many prisons, their good work is clear to see, and we saw it up close and awesome in their benefit show Friday night at the John Anson Ford Amphitheater in Los Angeles. 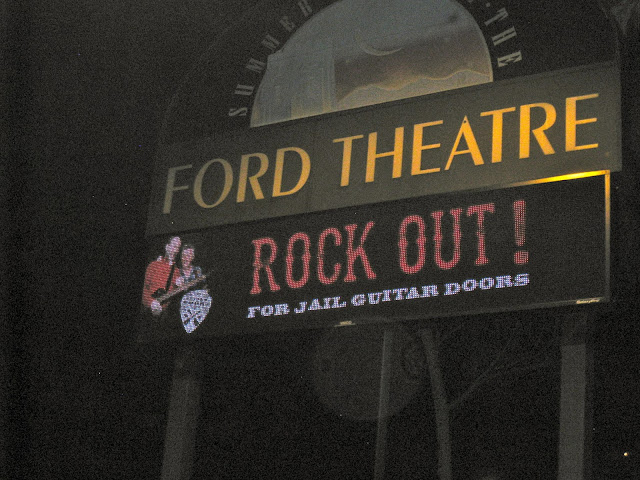 It was a hot night, perfect to rock out under the stars, and rock out we did! Comedian Jay Mohr was the host of the evening. It's obvious that he's a big music fan, but he started out his schtick talking about how musicians should just shut up and play their hits, going into a long bit about Eddie Vedder being ridiculous for talking about politics and playing venues without advertising. It seemed odd that he'd go off on that, when all the musicians playing this night are major activists, and activism was the cause of the evening. But I guess THESE musicians are cool by Mohr. Anyway. 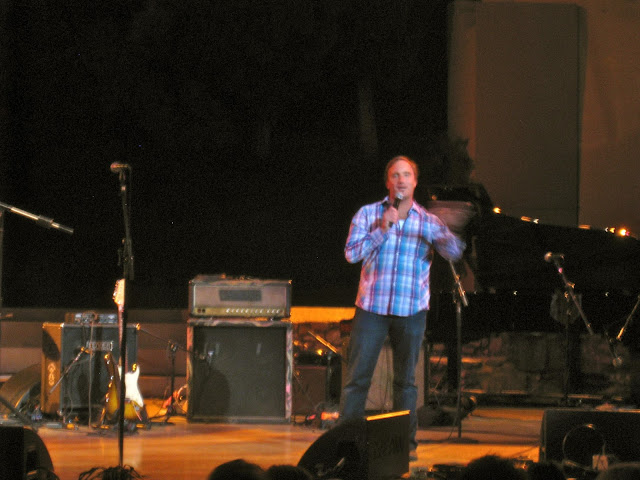 Mohr introduced Brother Wayne Kramer and Billy Bragg, who told us that Jail Guitar Doors is now active in 40 prisons nationally, and there are 42 on the waiting list. And on this very day, they just found out that they will receive an Annenberg Grant - amazing! Though as Kramer said, hardened inmates are a tougher sell to get people to give to than baby seal pups in the Arctic, but these are human beings, and they are changing for the better through music. Like we all do. 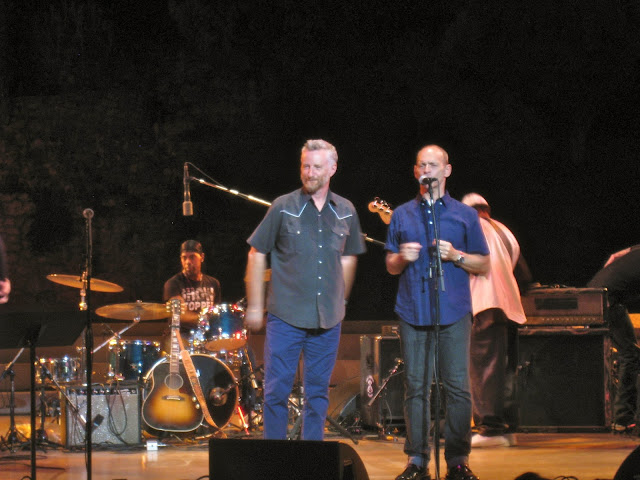 Then they brought out a JGD alumni, Franc Foster & His Melting Pot, who started with JGD a year ago, and "Look at me now!" His enthusiasm was infectious, and when he said, "This one is called 'Nightmover', and if it makes you wanna dance, don't be afraid," many in the house complied. His other guitar player had a thing with baby powder that he kept shaking all over the stage, to the extent that you could smell it a few rows back. He looked like he was having fun sliding around in it, but the Ford workers cleaning it up every time did not seem thrilled. He didn't care, all smiles and powder. The Melting Pot is Foster's program to teach music to the homeless on Skid Row. What a difference a year can make, indeed. 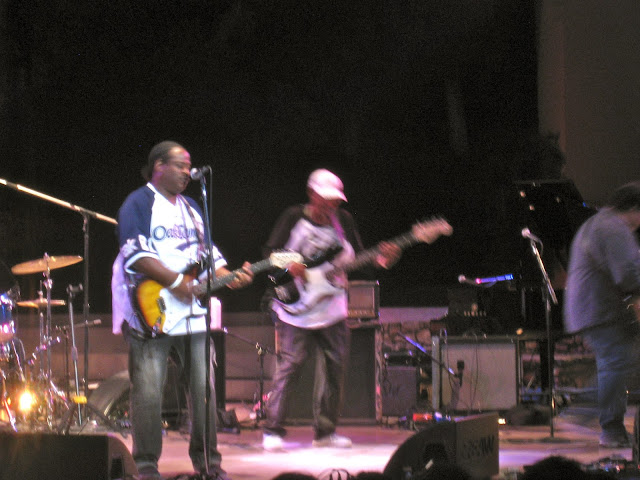 After the powder got swept up, Jason Heath and The Greedy Souls took the stage. Heath dissed Obama in his opening statements and the power went out on his guitar. Someone in the audience yelled, "They're watching!" which cracked everyone up, and these days, seemed probable. They played "God's Name In Vain", which asks the good question, "What have we done in God's name?" Think about it. 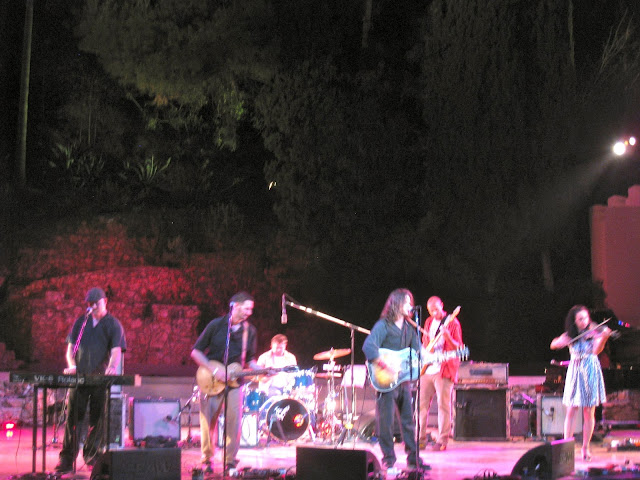 Brother Wayne returned with his famous star spangled guitar to join the Lexington Arts Ensemble in a jazzy guitar and sax duel/conversation that was jamming at its best, and then played the song that started it all, "Jail Guitar Doors". 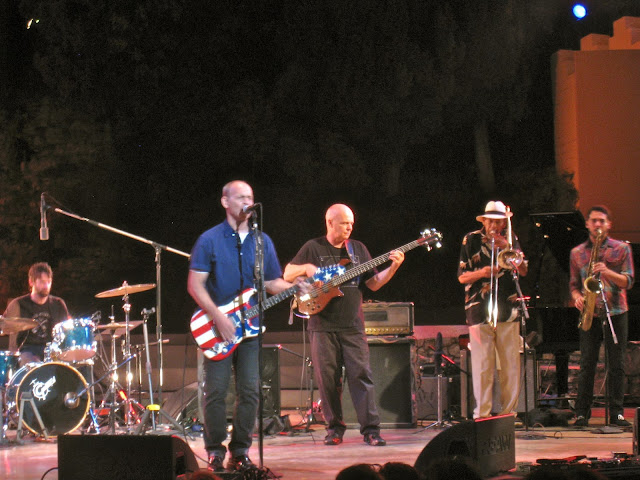 It was a great end to the first part of the program, and the intermission gave us time for perusing the cool stuff at the booths by Jail Guitar Doors and KPFK. It's such a relief to know that there are still good people doing good things! Phew. 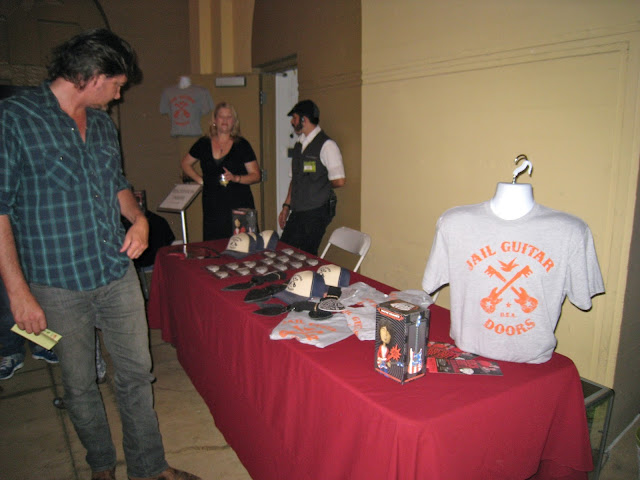 Dave Alvin kicked off the second half, looking smooth in his cowboy hat, and playing his "4th Of July", with Kramer backing him up, aptly, on that patriotic guitar. 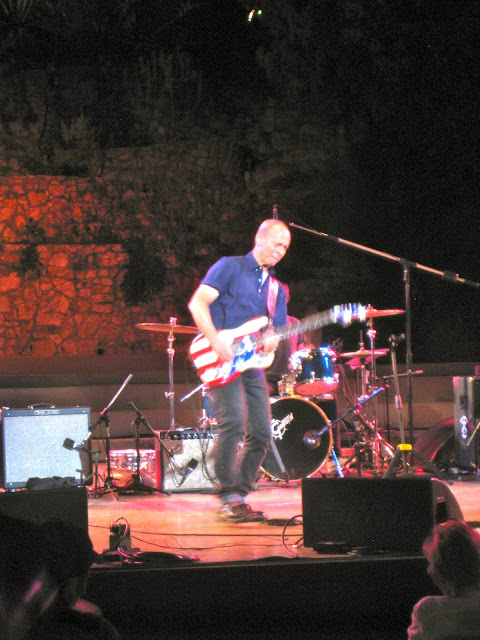 They were then joined by Dave's brother, Phil Alvin, who said, "If any guitar belongs in prison, it's this one!", making everyone laugh before they launched into The Blasters' "Marie Marie", 50's Chuck Berry style rocking, which made many of the older generation in the audience (the vast majority) completely thrilled, up and dancing in the aisles. It was simply great. 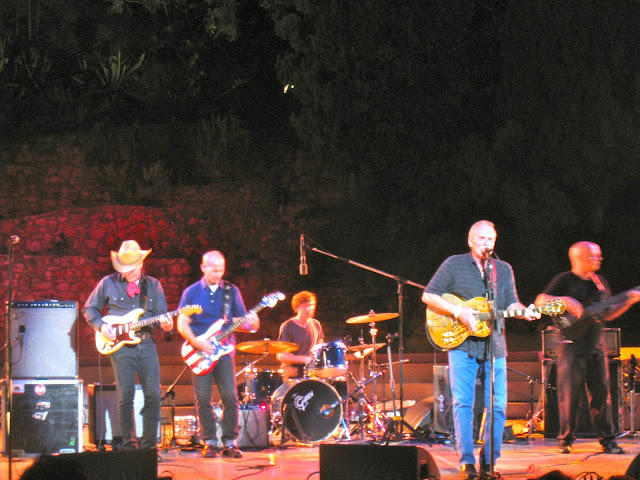 As was the next act, Tom Morello, The Nightwatchman. He took the stage to happy shouts before he played a note, and then said he'd been thinking earlier on "What do Malcolm X, Nelson Mandela, Martin Luther King, Jr, Gandhi and Wayne Kramer have in common? They've all been in jail, and got out to change the world." 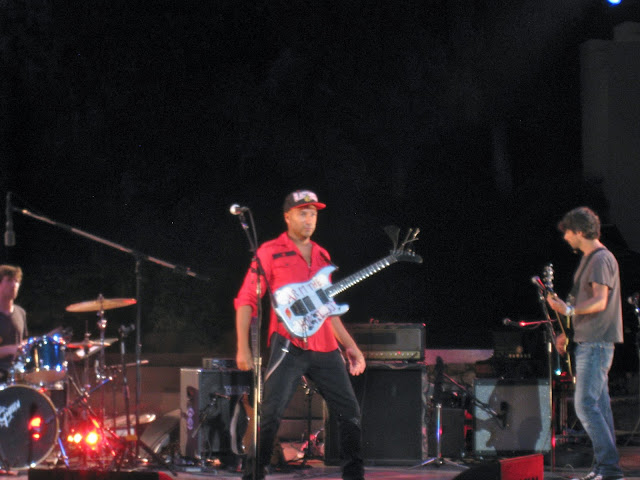 Much as Morello continues to try and do, with his "One Man Revolution", which was his first song (backed up by Carl Restivo, Dave Gibbs and Eric Gardner, his Freedom Fighter Orchestra), complete with amp feedback solo. His "Fuck, YEAH!" at song's end was echoed by us all. But THEN - Morello brought the house not down, but UP - on their feet as he incinerated the poor place with his now-famous version of "The Ghost of Tom Joad". I've seen this one played live many times now, and I still get chills every single time. I mean ... Watch!


Yikes. People sprang to their feet and caused such a ruckus that another song (unplanned) was demanded, and the entire joint stood and sang along to the Na-na-na-na chorus on his "Road I Must Travel". 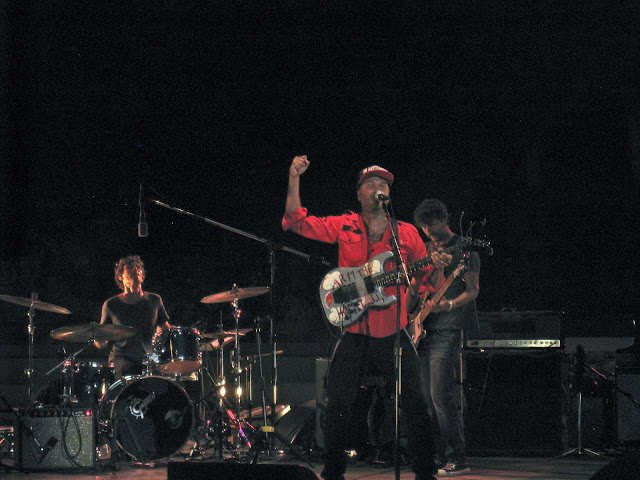 The place went crazy, and as Mohr came out he joked, "You'll get 'em next time," admitting that he'd never want to follow Tom Morello. But he did. I'm a person who really doesn't find mainstream comedians that funny as it's usually so smart assy and mean spirited, but I especially didn't laugh when, in telling a bit about Christopher Walken, he said, "And then he looked over his shoulders like he was telling a black joke at work ..." Really? Talking/perpetuating "Black jokes" at an audience full of activists and KPFK listeners, with African American people on stage and in the seats? He then went on to say about something else how men should think things through 1,800 times before they say them. He didn't take his own advice on that one, and I found it to be the one damper on the evening. I'm sure he must be cool if Brother Wayne is his friend, but it left me unamused. I guess I don't get the joke?

But then Jackson Browne came out and also said, "Among the dreams and aspirations in my life, I never did want to follow Tom Morello." High praise, Tom! But he did a beautiful job of following, with a new song, played gorgeously with just him and the piano, called "Standing In The Breach." He said it started out being about the terrible earthquake in Haiti, and then became about the disaster of poverty, and how we can't seem to do anything about that. I've been thinking of that a lot myself lately, seeing giant Russian billionaire yachts anchored off of Venice for our homeless to look out at. How can anyone feel right about that kind of excess when there are children in our own city that don't have enough to simply eat?! I don't get it, Man. The theater was so quiet,  just Browne's voice, the piano and crickets in the trees harmonizing. We're such a far cry from where the world could be ... The song touched me, and from the sound of the place at its end, everyone else too. 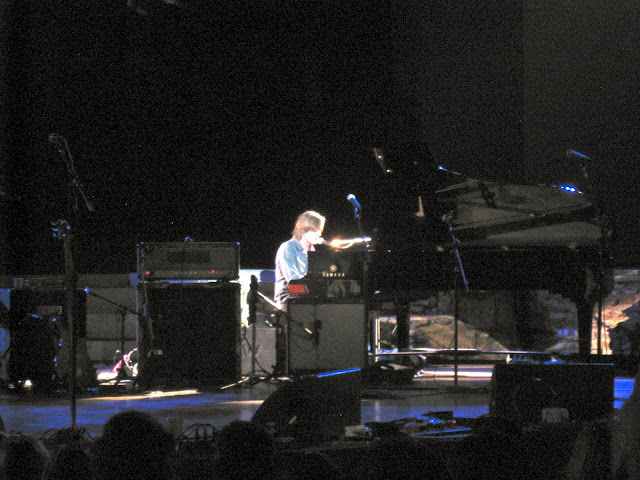 Kramer joined Browne for "Casino Nation" and then the Lexington Arts Ensemble returned to rip through "the feel good hit of the Summer ... many Summers ago," "Running on Empty". His fans for life in the place were ecstatic, dancing as they time-traveled themselves back to their own past Summers. It's wonderful to look around and see so many people so happy, just because of music, proving again how healing, transformative (even if just your mood!) and inspirational it can be. 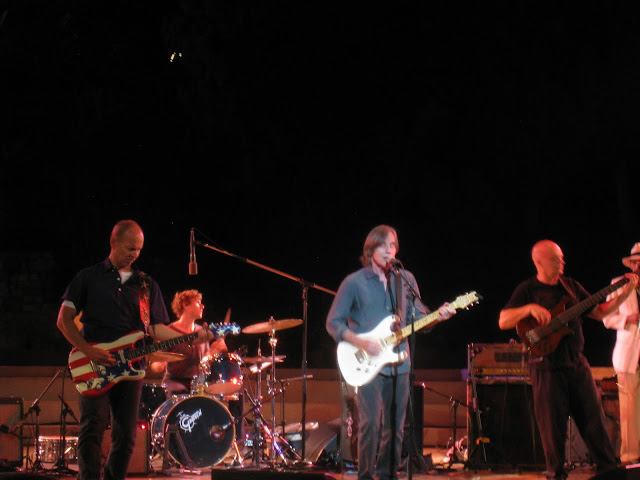 When Billy Bragg took his solo turn on stage, he said it can be hard to connect with young people in prison who may have never heard of him, or even Joe Strummer, but he can always count on the songs of Bob Marley. He played "Redemption Song", solo acoustic, in a very British version that held the fans rapt. He next gave us his pretty true"No One Knows Nothing Anymore." Bragg then explained that "the real enemy of all of us is not capitalism or conservatism, it's CYNICISM. Our OWN cynicism, that nothing can change. This must be overcome, and the only antidote to it is ACTIVISM. I have faith in this audience to change the world!" He should too, as this was a fired up bunch he was playing to. He dedicated his lovely, "I Keep Faith" to this very audience ("in every single one of you!"), in a song statement that was not only extra hopeful, but completely NECESSARY. KEEP. FAITH. Amen. 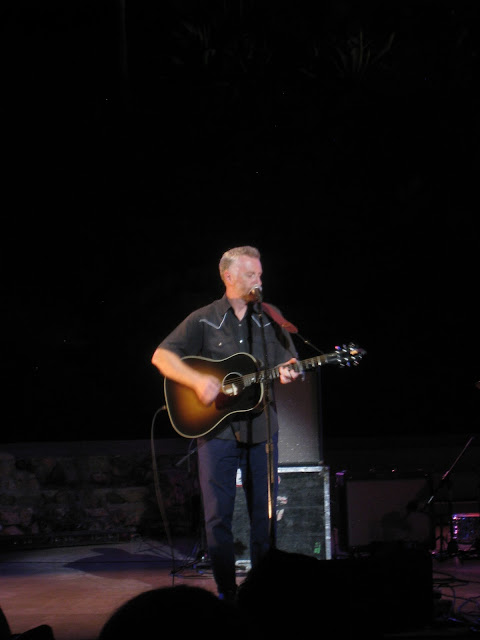 The wonderful Jill Sobule was the penultimate treat, joined by Kramer. She said that her favorite gigs ever have been "with Wayne - in prisons!" She played her gorgeous - and funny - "Mexican Wrestler" that begins with the lyric ... Sometimes I wish that I was an angel, a fallen angel that visits your dreams ... but she really needn't wish any longer, because with her voice, she already is an angel. LOVE her. Everyone did. Even more so because the next line goes ... Sometimes I wish that I was a Mexican wrestler in a red vinyl mask, and I might grab you and body slam you and maybe cause you physical harm ... Classic. Then it was time for the All Star Jam, which of course, HAD to be the mighty MC5's "Kick Out The Jams"! Morello took a second to tell us all that Kramer had recently become a father, "And I've never seen him happier!" It was true, as Kramer - as well as the entire cast of rockers - all had best time ever smiles plastered across their faces. 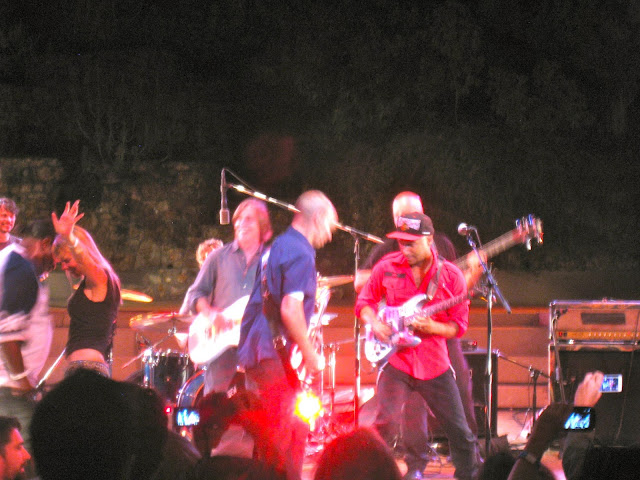 These friends and comrades proudly displayed how much fun they all have playing together, and the JDG grads seemed to be having the best time of all - complete with more powder!  "Right now it's time to .... Right now it's time to" Kramer repeated until the crowd all shouted back, "KICK OUT THE JAMS, MOTHERFUCKER!" And they sure did. 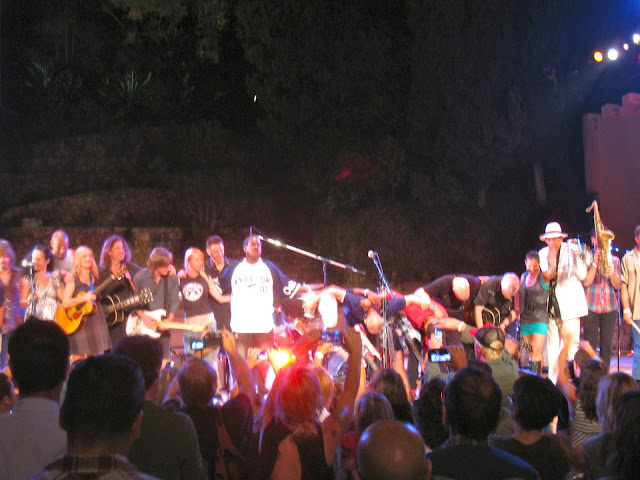 The barn burner finale was one big jumping rock out, precisely as billed. There was even an extended trombone solo that rocked! It's almost surreal to be at these shows, where any ONE of the artists playing would leave behind a stoked audience, but to get them ALL on stage together is something truly special. You could tell they thought so too. And they "Done kicked 'em OUT!" 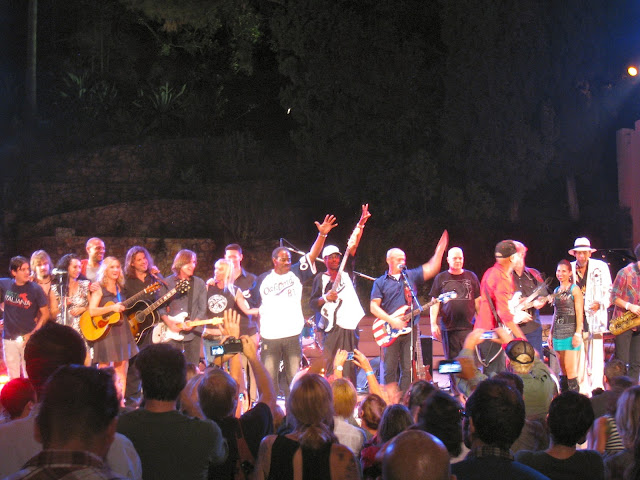 Bows were taken, and the fans roared. It was a great night of rock and roll, but more importantly, it was a great night of doing something, caring about something, together. These nights DO help you to keep the faith. Cynicism, be damned! Please check out Jail Guitar Doors, and help if you can. Help with ANYTHING if you can. And you can. I have faith. In every single one of you.

PS - You get that I'm not a photographer, right? Just visual aids.  Love, CJG
Posted by CJ Gronner at 9:15 AM