Janes In Chains at Irvine Amphitheater!

The Rockstar Uproar tour wound up in California this weekend, and I got to catch Jane's Addiction and Alice in Chains together in one show! There were a bunch of other bands, but we headed to Irvine for Jane's and Alice. What more do you need, really? 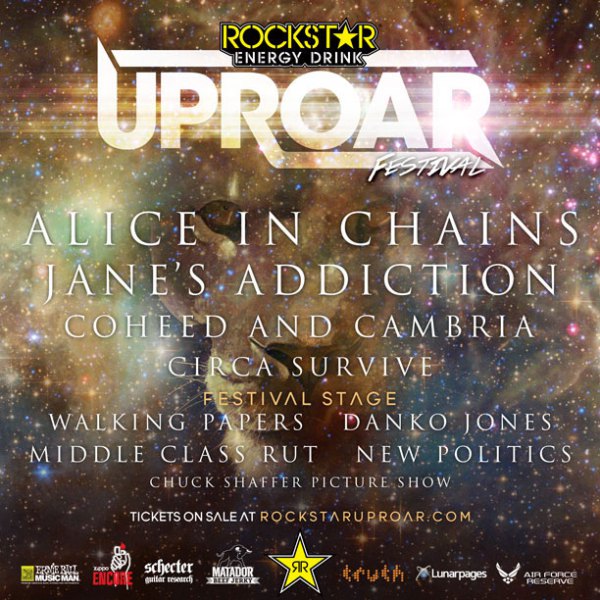 We arrived in time for a gorgeous sunset over the Amphitheater where I had seen a few Lollapaloozas in the past, so it was fitting that we got through Friday 405 traffic just in time for Juana's Addicion!

Tribal sounding drums set the stage, and then the crowd roared to see the band arrive with "Underground" off of their latest - great - album, The Great Escape Artist. Their dancers, Etty Farrell and Stephanie Spanski, swung from the rafters on trapezes wearing giant white dresses that reached to the stage. Awesome. Perry Farrell danced around barefoot, and kept the momentum going right into the classic and monstrous "Mountain Song". The place went crazy for it, as they should have. 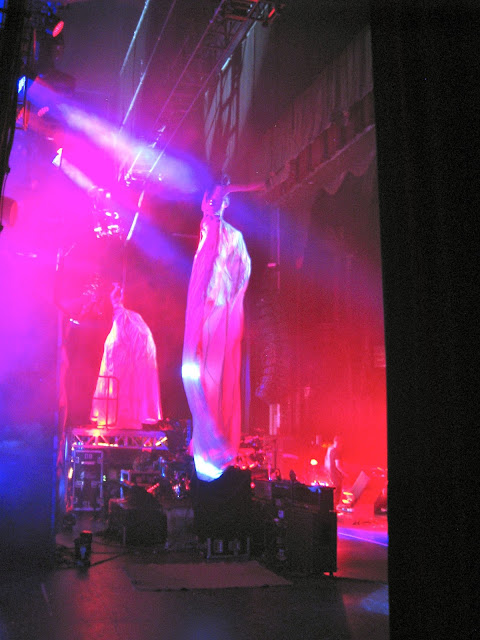 "West Coast!!!" yelled Perry, to thunderous crowd recognition. He said, "It's Yom Kippur and since I couldn't make it to Temple, I made my own! ... AND it's Stephen Perkins' birthday!" Both facts blew the place up even more. "Ain't No Right" went straight into "Been Caught Stealing", which featured a cool kind of scat vocal from Perry while Dave Navarro answered every sound back with his guitar.

"Is marijuana legal here yet? Fuck them! I wanna be a superhero!" asked, answered and stated Farrell before blowing into "Another Soulmate" - a brand new song played by shouted request. The people were into it. "Shit, I've been up for two days already ... should we do 'Two Days'?" asked Farrell, but they did the original "Three Days" to everyone's delight.  Etty and Steph were back, this time in gags and twirling canes as they vamped around the guys. Navarro had a particularly blistering solo on this one, that had dudes and chicks alike gasping. Perry and Etty were getting DOWN together, and it's always a joy to see this long-married couple so into each other. For real. Perkins had a crazy solo, complete with sparklers going off, perhaps for his birthday. Chris Chaney was holding it all down on bass, whose licks are especially featured on this one. 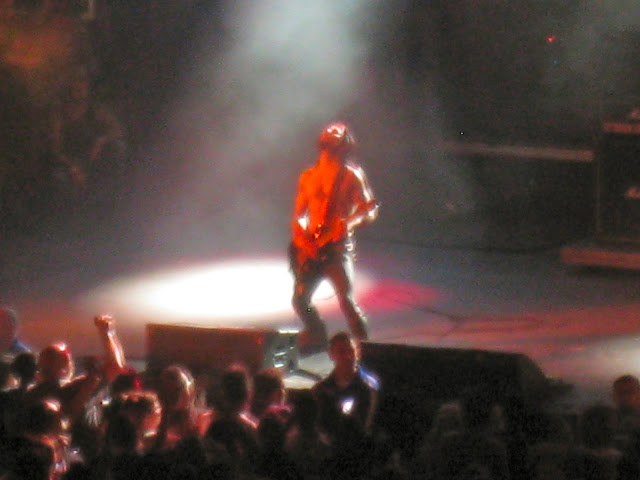 "Motherfucking 3,4!" yelled Farrell as the classic intro to "Ocean Size" - the best. Everyone was up and dancing, and the party was ON. That flew right into "Stop!" which was just crazy. Perkins was going OFF, Perry was dancing like a dervish, and absolutely every voice in the joint raised as one to sing the "Hum along with me, hum along with the tv .... ohhh ohhhh OH!" part. It was awesome as ever. 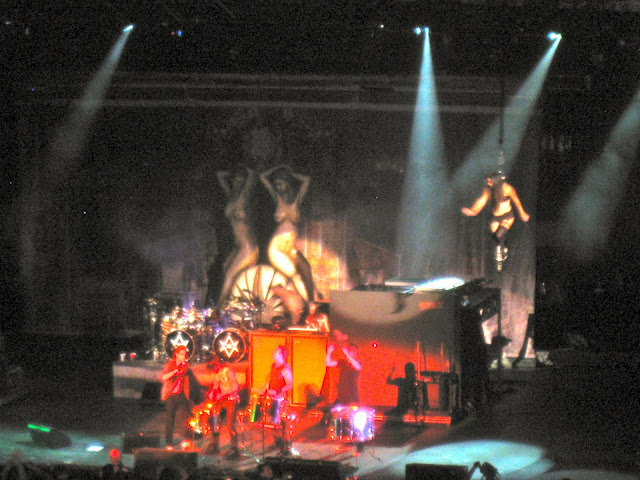 Farrell's voice sounded as great as it ever has. This was quite a feat as he next told us that "I didn't think I was gonna make it, you know when you party so hard ... but then I drank a YooHoo and now I feel fine ... every day you just gotta chip away!" And did they ever. 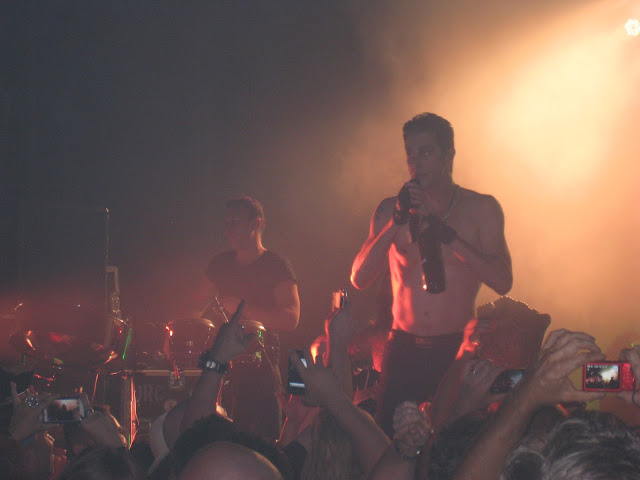 "Chip Away" featured women (I think) suspended from bars skewered through the skin in their backs as they swung out over the audience, while everyone in the band but Perry banged on drums in unison. Perry sang and howled without restraint, ("This is what WE do at Temple!") and the crowd absolutely loved it (and were a little nauseated too, as I overheard. The skin does look like it's going to split open at any instant).


Then that was it - "No, 'Jane Says'!?!" I overheard one girl wail - and one of the greatest bands ever took their bows, along with the gorgeous dancers, suspension artist, and even the young Farrell boys waved to the crowd. Awesome awesome awesome - and too short.

Some fun was had catching up with friends, then Alice In Chains took the stage. I was personally excited to see them play as I've been friends with their singer, William Duvall, since back when he was the singer of his own band called Comes With The Fall. I hadn't yet seem him perform with Alice In Chains - no small feat to take over those Layne Staley shoes - so this was going to be cool. And it was. They opened with "Them Bones", and I wish I had a photo of just how hard the guy in front of me was rocking out. In his very own, ecstatic, slightly boozy world. The very feeling of why any of us cares about music. 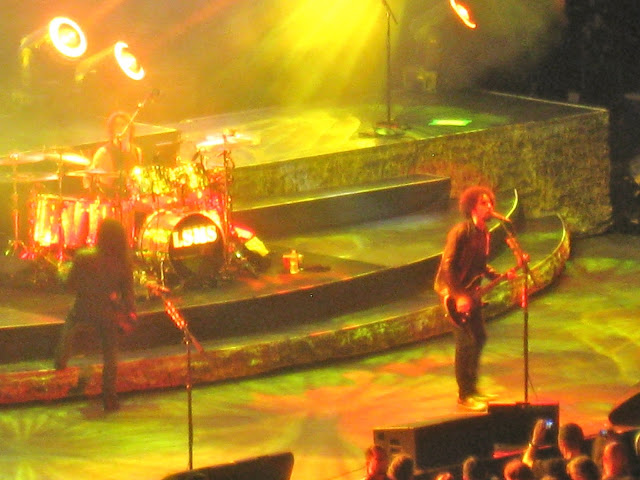 Duvall sounds great, kind of like Staley, but making it all his own at the same time. He harmonizes beautifully with the now short-haired Jerry Cantrell, with both their voices and guitars. "Check My Brain", "Again", "Man In A Box" where Duvall sounded a LOT like Staley ...


They had the crowd with them for every note, fists pumping. "Got Me Wrong", "Last Of My Kind", "We Die Young", "Stone", "Nutshell" were all blazed through with all rock pistons firing. They only played two songs off of their new album (The Devil Put Dinosaurs Here), so it seems they know their crowd, as every time the classics began, the place went ballistic. We made the what turned out to be very wise choice to cut out and hear the all-time greats "Would?" and "Rooster" as we made our way to the parking lot - and like ten minutes later they closed the 405 North! Phew. 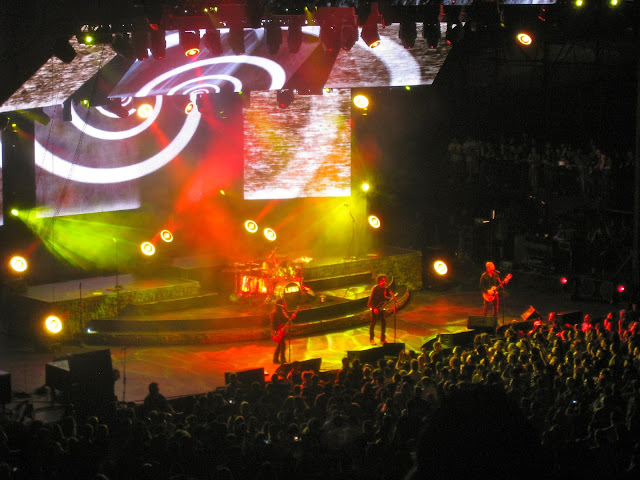 I'm so glad I got to see Duvall rule it, and the Jane's In Chains/Alice in Jane's (as the bands have been hash-tagging it) extravaganza together. They are both MONSTERS of Indie Rock and the soundtrack to some of my greatest times ever. Bless and thank them both, on that high holy day, and yeah, Man.  You gotta just Chip Away! And then you get nights like these.