Love For The Fun Side Of The Wall

Hola! I just got back from a little - sorely needed - getaway to Sayulita, Mexico. Wow, was it lovely. Then this morning, honestly, my first thought was "Well, back to the junkies and the homeless." First, because I'm simultaneously working on a Viceland show about heroin addicts (formerly called American Junkie until overly p.c. groups complained and now it's Dopesick Nation - coming to you on September 12) and a documentary about income inequality/housing in Venice (90291: VENICE UNZIPPED), so those thoughts are work related, but also just the reality of living here. I didn't see a SINGLE homeless person sleeping on the street in Mexico. Not ONE person asked for a handout, they sold you things and worked for their money. EVERYONE was friendly and warm and welcoming ... and we want to build a wall against them, when it seems they actually have it a lot better figured out. I get that L.A. is a massive city, and this was one little fishing village, but still. ZERO homeless. They just seem to take care of each other better. Care more. As one sign said, "Smile - You are in the fun side of the wall" ... so they even manage to have a a good sense of humor about our government's ridiculous prejudices against them. 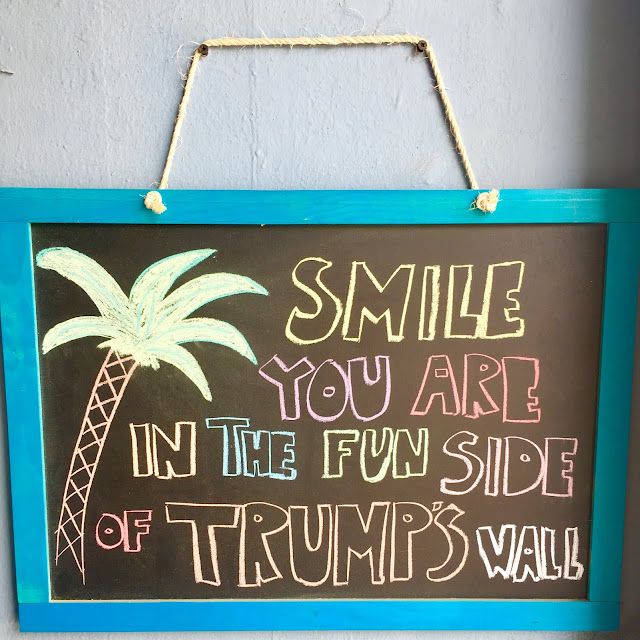 Sayulita is all about color. All of the walls are painted brightly ... 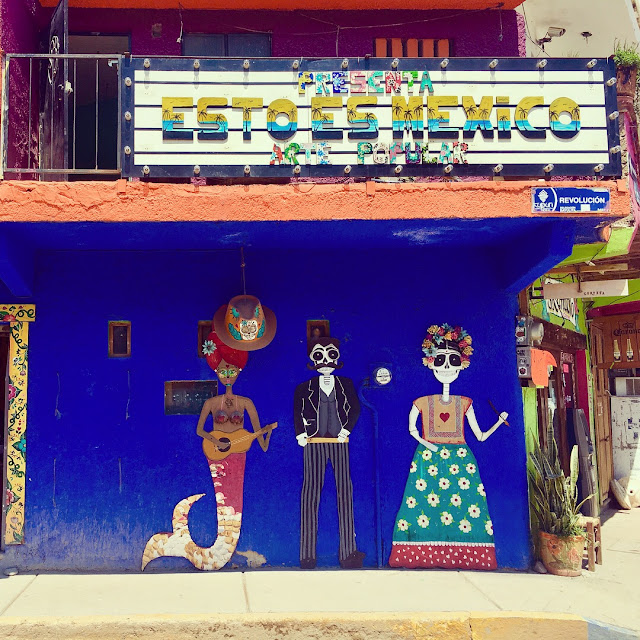 Festive flags hang above the cobblestone streets in the town plaza ... 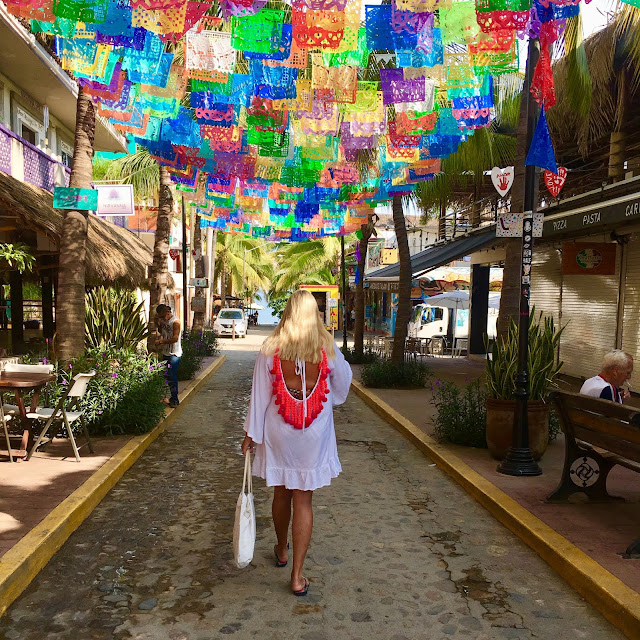 Their big thing is pom poms, and they're everywhere ... 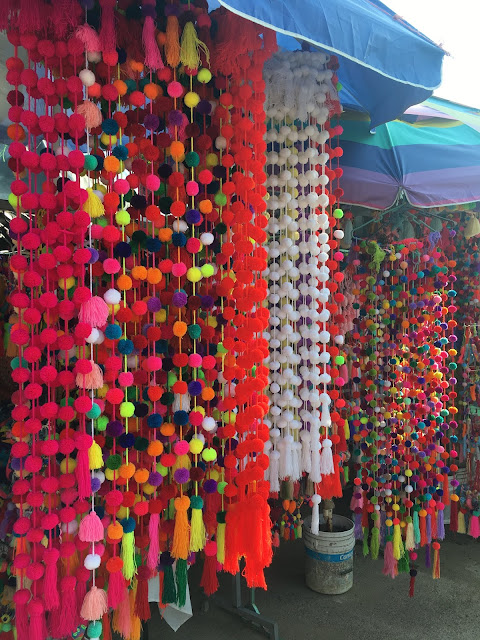 The native people to the area are the Huichol, and their art is exquisite. All colorful and symbolic and meaningful and great. 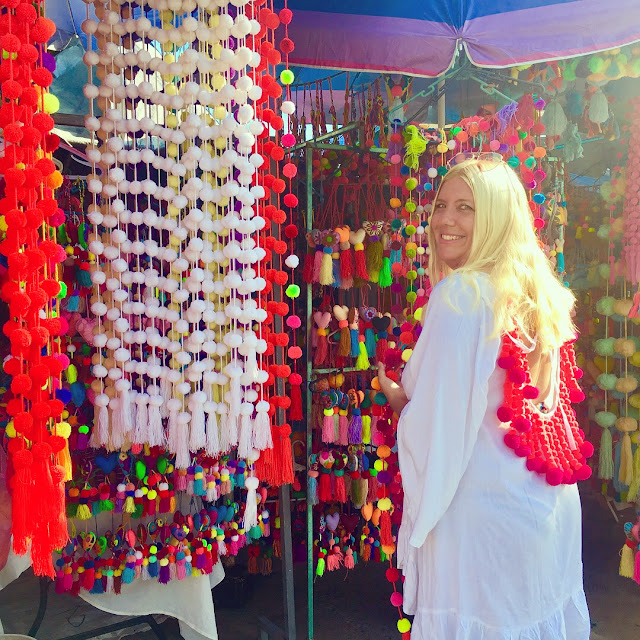 I got a necklace from this artisan elderly woman Maria as she sat there in the "Hippie Market" (perfect for me!) creating her wares and smiling warmly at my effusive gushing that she couldn't understand. 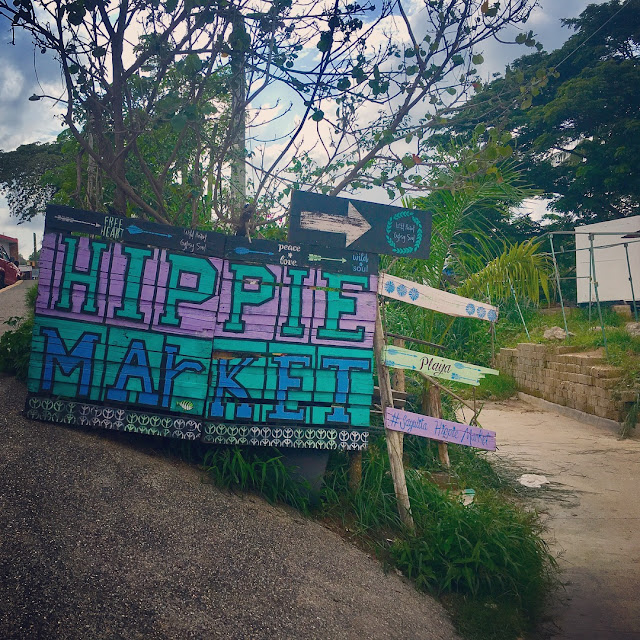 I stayed at a little boutique hotel called Hotel Hafa, and it was the most charming place ever. Done up in Morocco meets Mexico vibes and colors, it was again perfect for me. 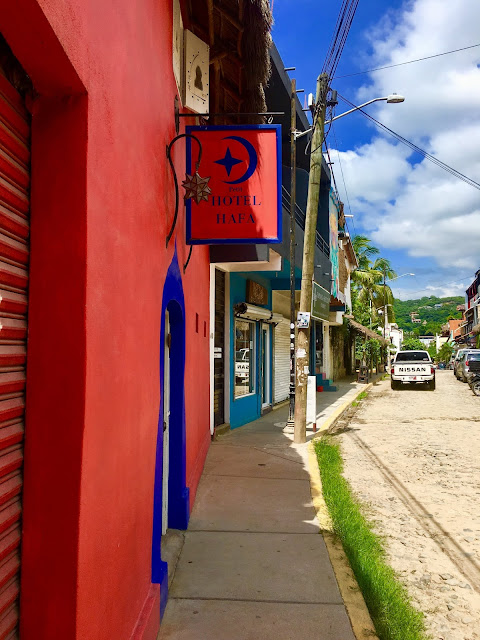 Hearts are everywhere in this part of Mexico also, and everywhere you looked there were hearts leading you to your room in the hotel ... 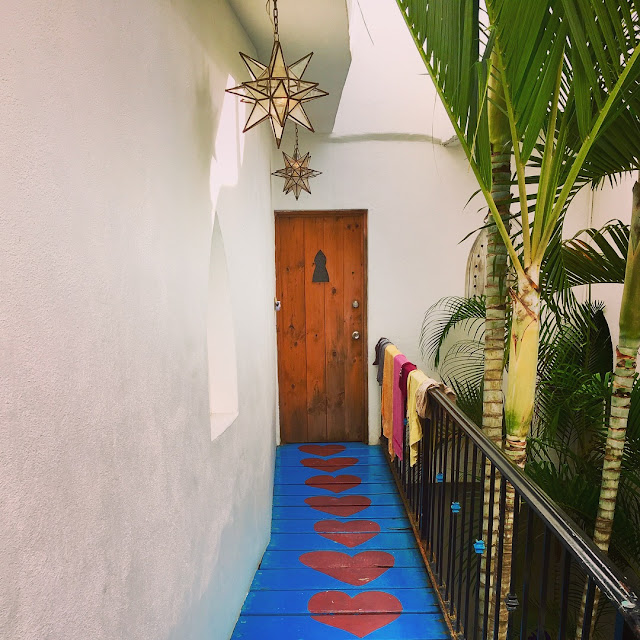 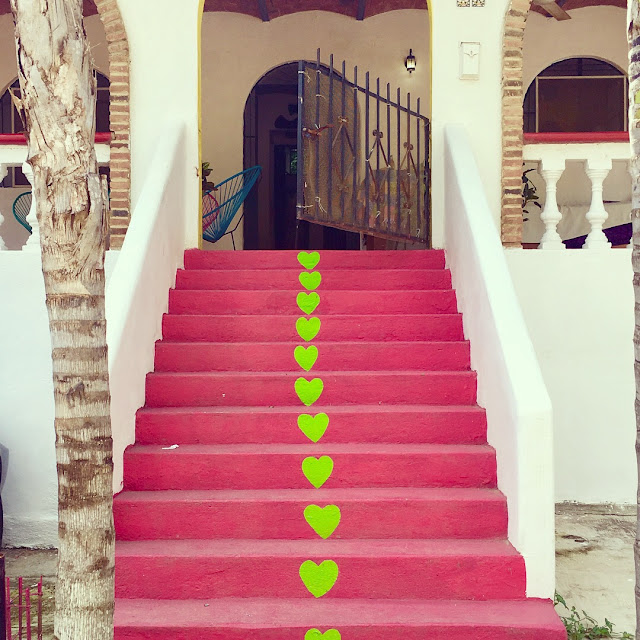 ... in every shop and worn on every person. I wasn't really into hearts on stuff before, but now I get it. Everything should start and end with love. and the heart is a symbol of that. And you absolutely feel it here. 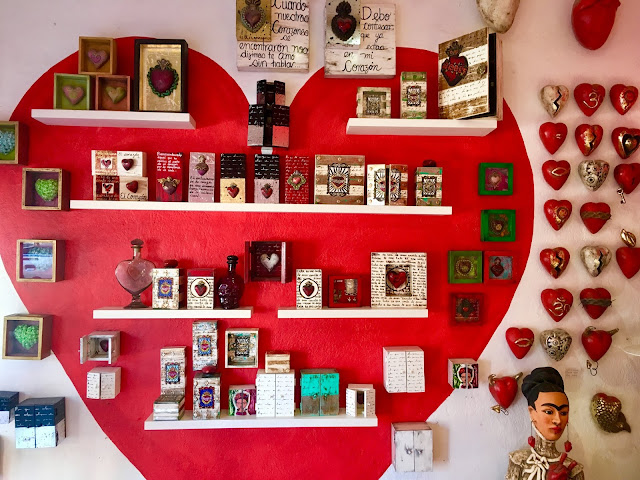 My favorite beach was Playa de los Muertos. It's not called that because you might die in the water, but because to get to it you have to hike through a hillside cemetery. 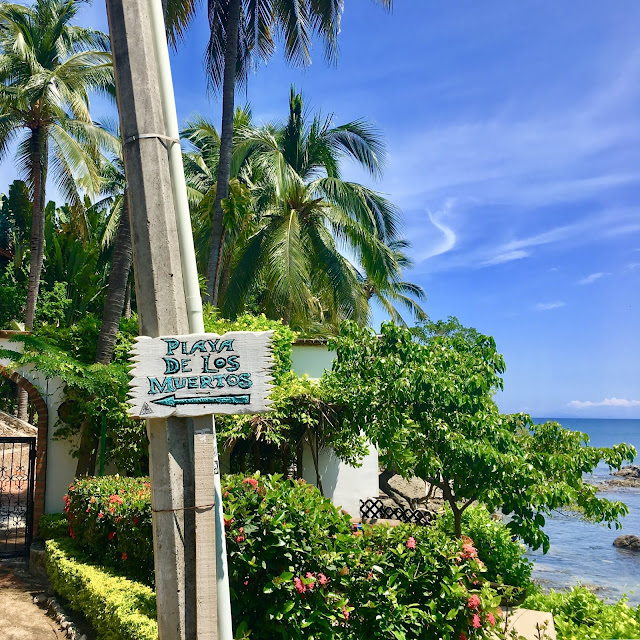 Even the cemeteries are full of color and all the graves are bedecked in bright paint and colors and religious imagery ... and some surfboards for good measure. 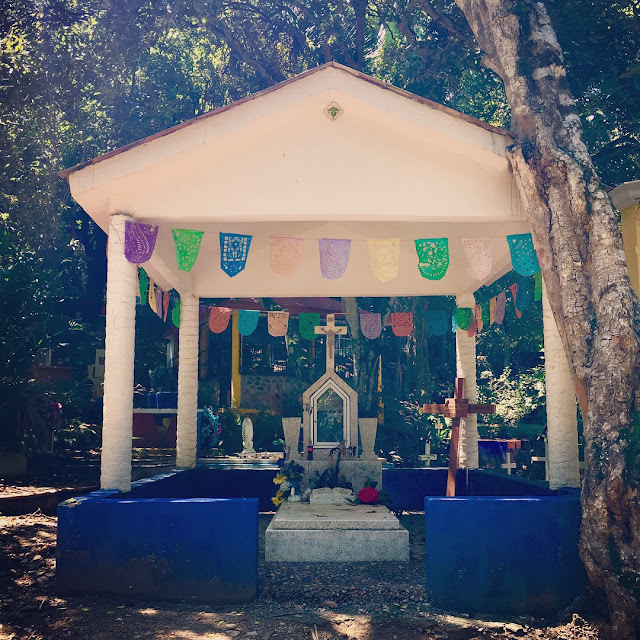 You come down the hill and there's a little shack with food and beverages being made for the beachgoers, and then you see this pristine beach with almost no one on it. The water was so warm you couldn't tell the difference between water and sky, and I'd float on my back and feel like I was in one of those "Pause" deprivation chambers ... but better. Way better. There would be a margarita waiting next to my towel when I got out of the water, from a friendly guy whose gig that was. It wasn't crowded, and I only heard Spanish ... like this is where the locals hang. I love that ... and indeed, search for that. For the REAL in places. 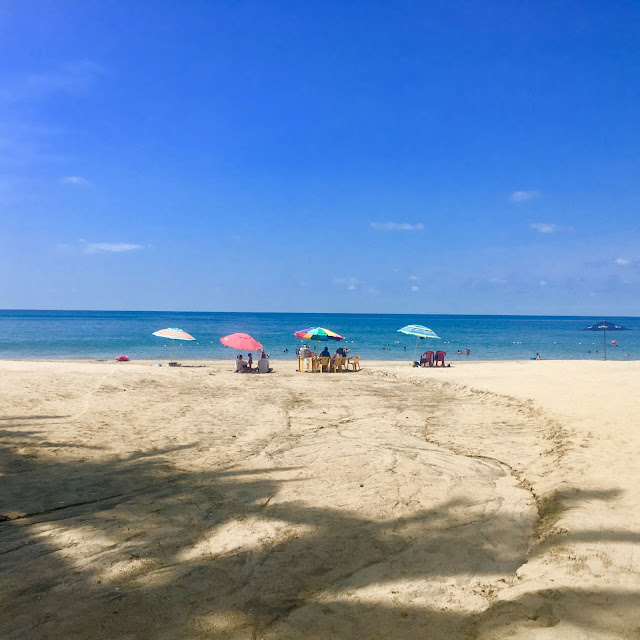 I was looking for REAL adventure too. I'd heard and read about the "Hidden Beach" in the Marietas Islands off of Punta Mita for years ... seen it from above and HAD to go. 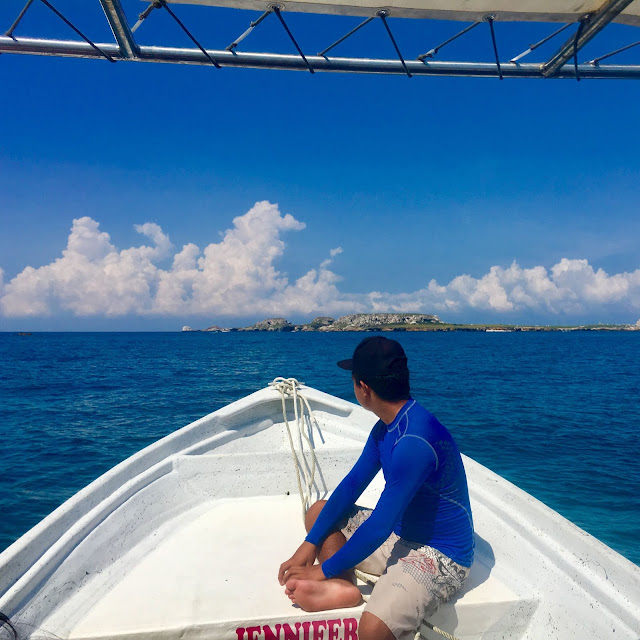 They've drastically limited the amount of people that can enter this cave beach now - because Humans - and I was extremely lucky to finagle a boat to take me there. 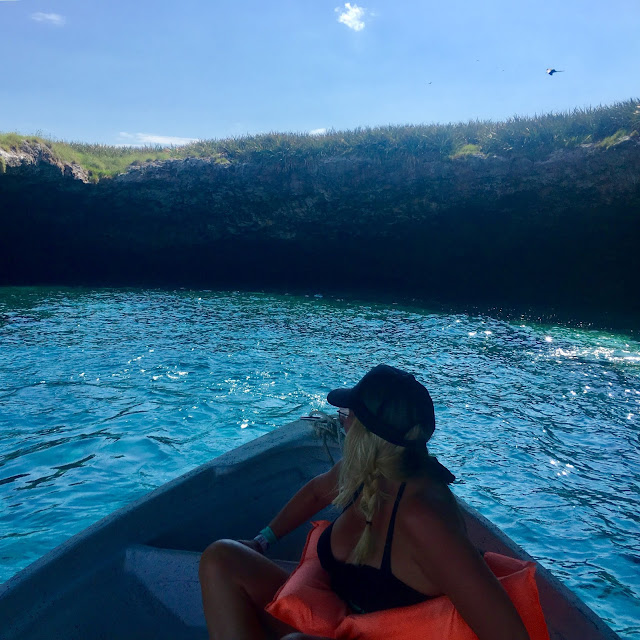 "Playa del Amor" is its nickname, again with the love. You jump out of the boat (with helmet and life vest on so you don't end up like the Thai boys) and swim through a little opening in a cave. 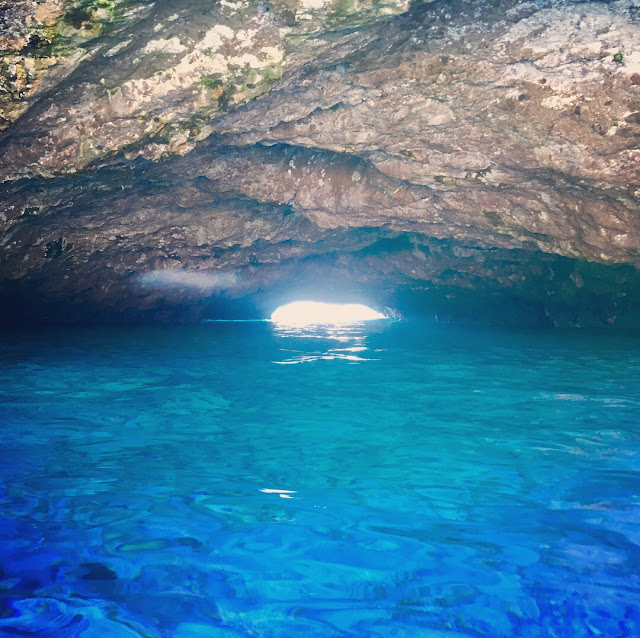 Once through the tunnel, you emerge into the crystal clearest water ever, where you are allowed to frolic and take photos for about 20 minutes before you have to leave, again because of humans. 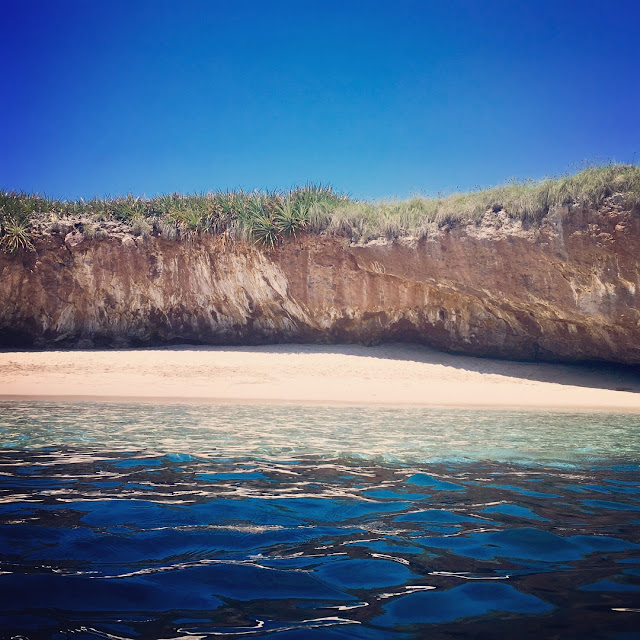 Looking up from this beach was one of the coolest things ever, and I was literally about to burst with gratitude. 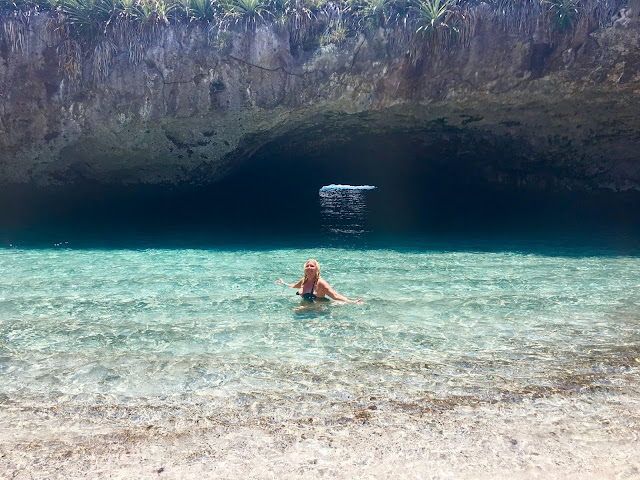 If you google it, you can see just how cool it really is - like this blurry shot I stole from the internet. 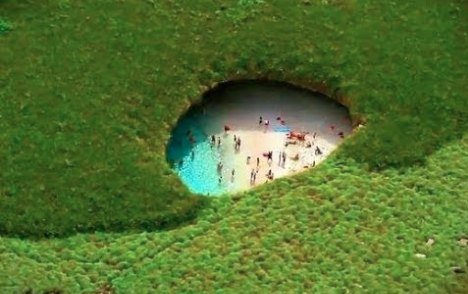 It felt - and was - special to be there, as even many native Mexicans have never been. My guides were laughing at me, because I was so stoked, but probably also because they didn't understand a word that I was bombarding them with. No matter. Everyone understands a happy face. I will always remember this solo trek to an island beach off Mexico as one of my most special days ... the day after my birthday! What a way to kick off a new year! 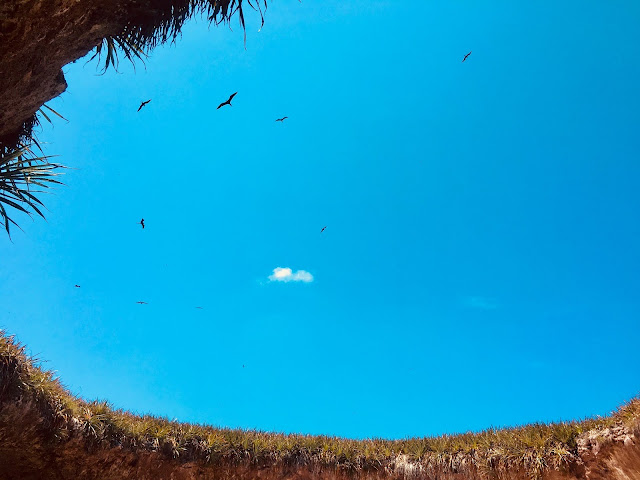 Like the smiles and "Hola Amiga's" that greet you everywhere ... like, let's start out as friends. The warm spirit is infectious everywhere you go, and music drifts through the days and nights like a live soundtrack to their lives, all the time. Even the lizards were friendly ... maybe too friendly, because this buff looking green guy would never leave my room, and gave me fresh heart attacks every day when it jumped out of my towels or clothes. But that's Mexico, and you just shrug it off (after screaming bloody murder). 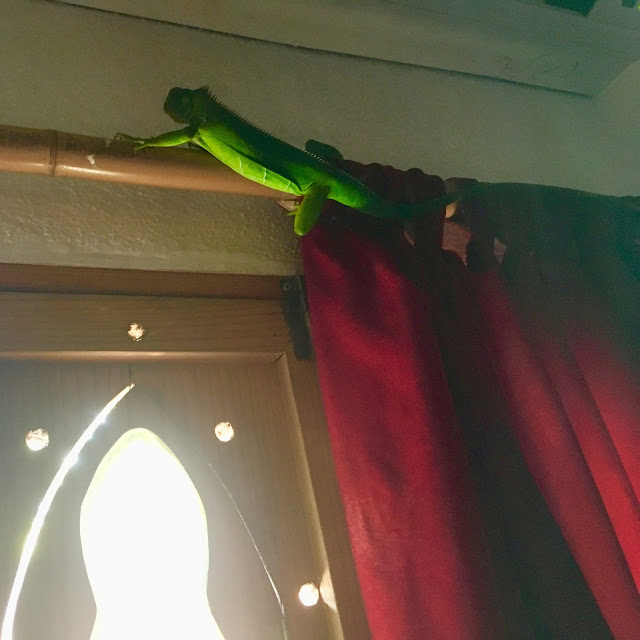 Even the surf schools find a way to be fun and musical ... Get Up, Stand Up! Perfecto. 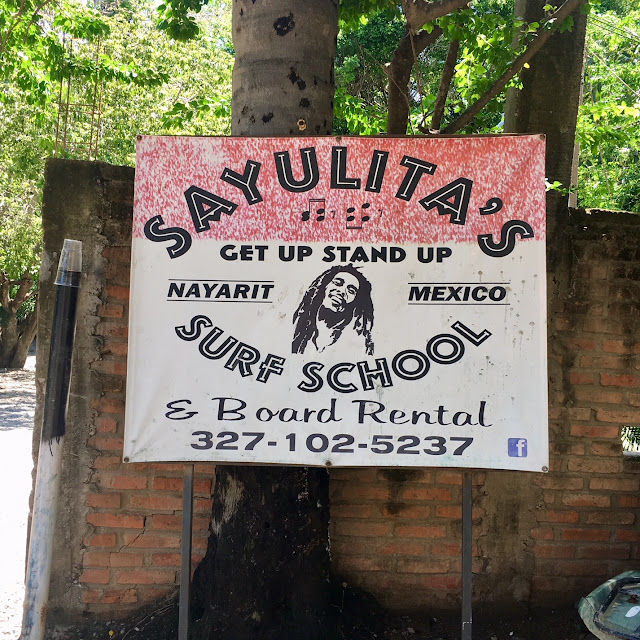 Though very little English was spoken here, and my Spanish is very L.A. pequito, we all managed to get our points across and enjoy ourselves in the process. One evening after a delicious meal (where they use fried cheese instead of tortillas for their burritos!), I saw a bar with swings instead of stools, and had to belly up. 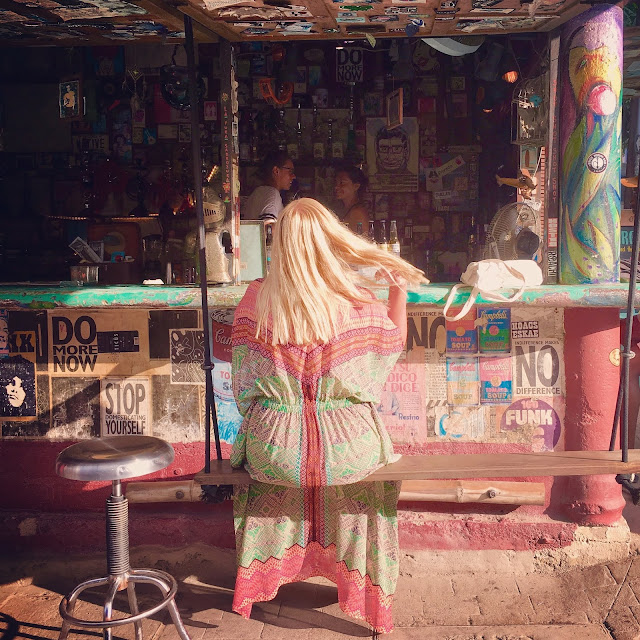 I was instantly friends with the whole joint, and we all sat out a sudden squall of ferocious rain without a care in the world, and a tequila horchata in hand. That was a fun one. 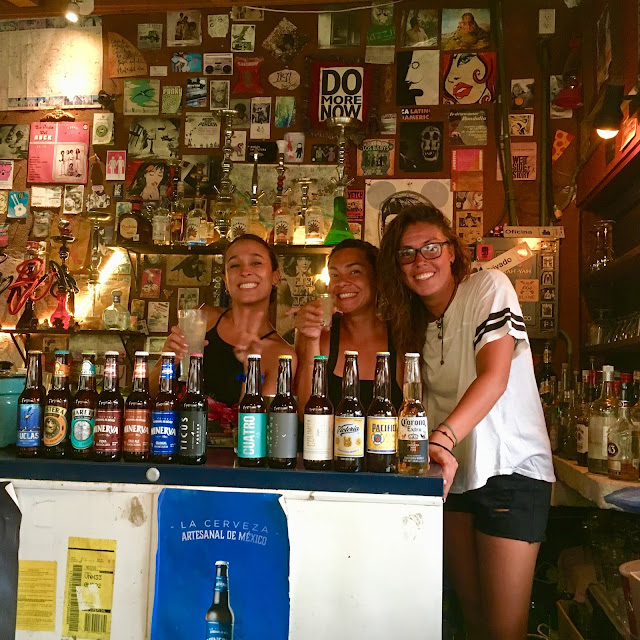 My days were half lazy and half super active, because I like to do and see everything. I had massages on the beach for $20. I rode a bike around town, but quickly dropped that and hoofed it, because bikes on cobblestones and dirt roads are not that awesome. Walking really lets you see things up close, and lets you be more impromptu about what you go investigate. No matter where I went, it was "Hola, Amiga!" and waves and instant kindness. The Mexican people are wonderful, and I'm so sorry and embarrassed that they've been so vilified by this current U.S. Administration. I was seriously just doing my best to be a goodwill ambassador, and let them all know that WE'RE not all bad. For Heaven's sakes. 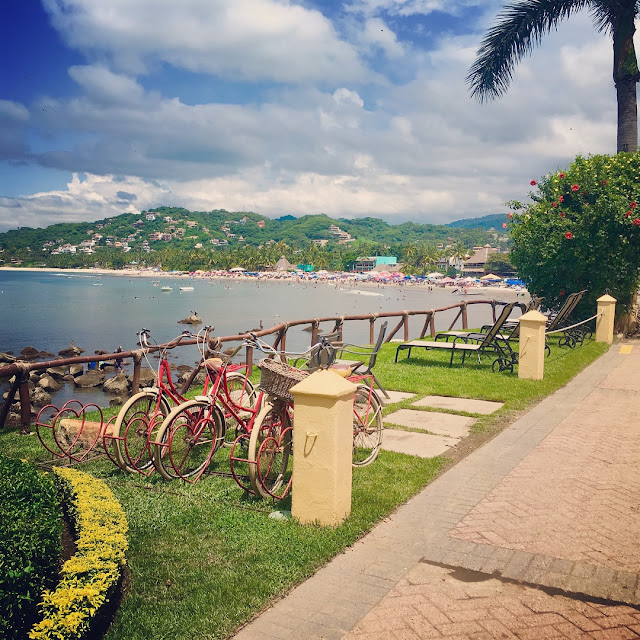 As I start a new year, and am back in Venice, and back deep into the drug addiction and homeless problems here, I can only think about how grateful I am that I was able to travel and explore and communicate (even if just by gestures and charades) and let beautiful Mexico know that they are loved, and then to be back here doing something to try to help make these United States be a little less awful. We could really learn a lot from Mexico, from the looks of it. I know they have their own share of problems, but the every day people you meet are lovely. Not sleeping on sidewalks. Not begging. Not complaining. Working hard. Playing hard. Just living their lives with love and color and music and art and family and friends. They really know the value of those things, much more than money, which is where I think we've gone wrong. 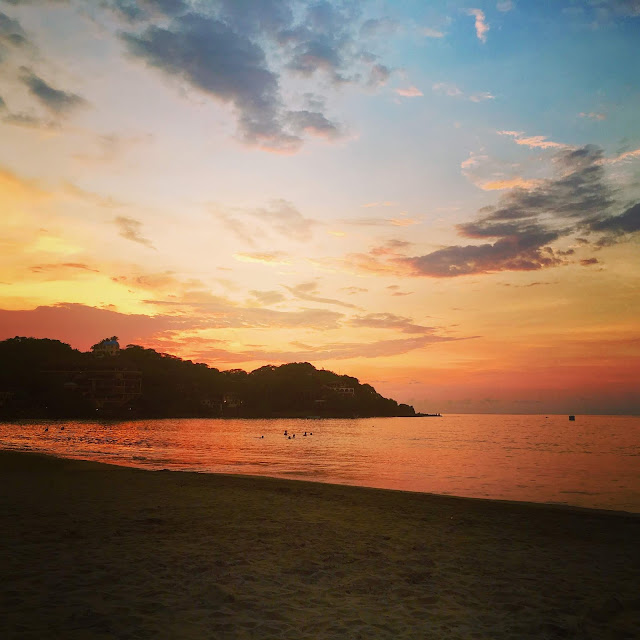 Gracias, Sayulita! And Mexico ... I have your back.