Rodrigo Y Gabriela Live With The L.A. Phil At The Hollywood Bowl!

It was another perfectly balmy and wonderful night at the Hollywood Bowl, and this one was even more special because I was seeing the marvelous Rodrigo y Gabriela for the first time live. And WOW. I'm a fan for life. 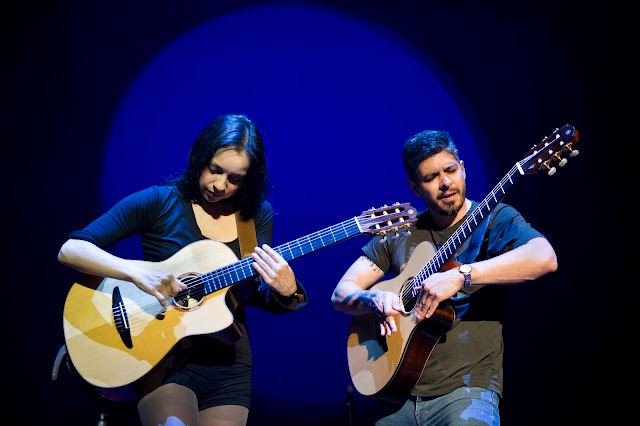 The program opened with the ever-charming Gustavo Dudamel and the L.A. Philharmonic performing a series of Latin-themed numbers to set the stage for the dynamic duo from Mexico who would join the show later. After The Star Spangled Banner (which we again made it in time for, I'm happy and amazed to report), the orchestra immediately launched into the lively "Nereidas de Dimas" from Salon Mexico by Perez. This number set the tone for the all-out fiesta that everyone in the Bowl had been invited to - and was feeling it. 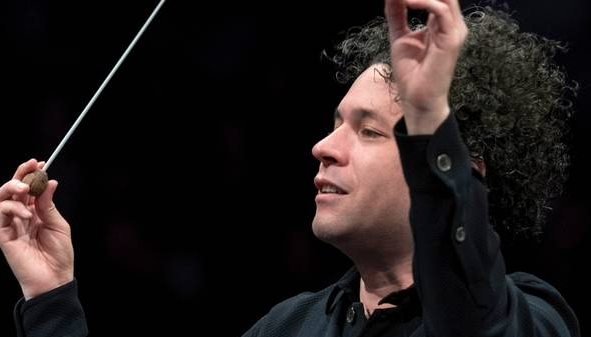 "Good evening, Buenas Noches!" shouted Dudamel, welcoming everyone to this absolutely beautiful night of music. "We are having fun up here! ... and now we will travel from Mexico to Cuba for a piece called El Caiman, or "Xylophone" - you will see why." The rare xylophone showcase piece by Paul Desenne was full of energy and African rhythms, and yes, a xylophone spotlight. And it was great. The whole place was in a great mood, and I think it was because Dudamel's happy energy is so infectious, you can't help but enjoy yourself. We were loving it, and then we took another musical flight, this time to Argentina for Piazzolla's Oblivion. "This tango is about contemplation of the past, and it is very romantic," explained Dudamel in his charming accent. He was right - what a romantic, beautiful tango of a piece that one was ... swoon! I like it that Dudamel thought so too, saying, "Ahh, it's wonderful, so beautiful!" Totally.

Then we flew back to Mexico (where I will also be flying for my birthday adventure this coming weekend, so this was a wonderful way to kick off the week!) for their "Second national anthem", the great Huapango by Moncayo. There were choppers flying overhead during this one, providing their own interesting percussion, but the crescendo of the music soon made you forget all about them, especially when the gorgeous harp was playing. Dudamel again must have felt the same as we did, as he was beaming all throughout his energetic conducting of the Mexican classic. Our L.A. Phil is SUCH a treasure, and when playing under the stars at the Bowl, it just can't be beat.

Unless you next bring out Rodrigo y Gabriela! The guitar virtuosos took the stage casually, both in dress and demeanor, but the huge cheers before they played a note hinted at the bigger deal that it was. Rodrigo had blue hair for the occasion, and you could tell that they were both fired up to play. The crowd was equally fired up to listen, clapping along from the start of their first piece, "Hanuman". This exciting duo is truly a musical force, and had the entire Bowl mesmerized and immersed in the tunes the whole time. This isn't always easy when it's brand new songs that no one has heard, but no matter. They could play anything and we'd be into it. After the first one, the joint erupted in applause, and Rodrigo said, "This is our fifth time playing the Hollywood Bowl ... it's like magic that we come here without rehearsing and these musicians read papers - and they PLAY. It's fucking amazing!" It really was. 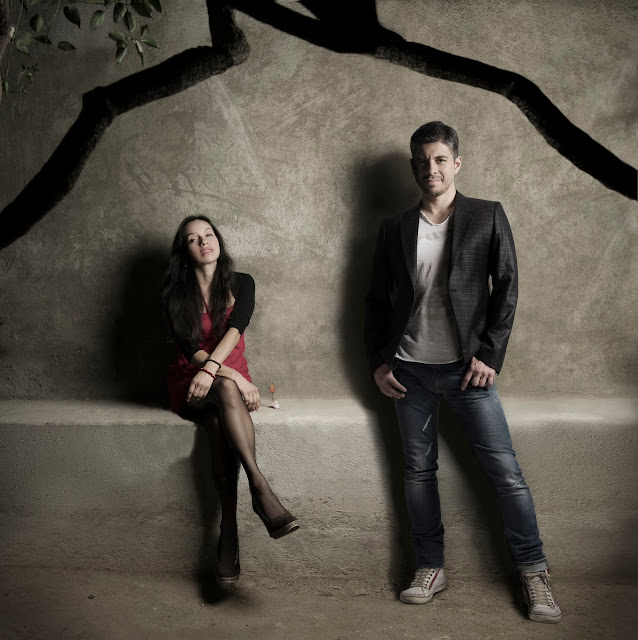 They were playing all new tunes from the new album they're working on now ("The songs are so new I don't remember there names" - G.), and from the sounds of it, it will be a must-own. Gabriela is not only a complete bad ass guitar picker, she is also perhaps the cutest person alive, I'm pretty sure. Her sweet voice when saying, "Buenas Noches, what a treat, it's like Santa Claus at Christmas!" made everyone fall even more in love with her and her playing. As a man about halfway back yelled, "I love you, Gabriela!" echoing everyone else's thoughts.

"Mexico where we live is a beautiful place to get inspired (yay!)", said Gabriela, as she explained that on this new album they worked 9-4, "like in an office". The L.A. Phil had to race to keep up with their breakneck speed-playing, and arms got weary trying to clap along fast enough. My notes simply say "WOW!" in a lot of places. Dudamel's face looked like he was thinking that too. Gabriela said after that one, "I want to say I have a feeling of being very grateful ... we are so lucky to be living this life in this moment ... and now we play 11:11, the title track of their also-named album. She was right, too. We were ALL so lucky to be living this life in this moment ... and I think everyone knew it. It felt special. To where when that one ended, Dudamel said, "Isn't it amazing, this?!" Agreed, 100%.

"Let's have some fun!" said Dudamel before they lit into "Tamacun" ... which we continued to do until the last note. When that last note happened, Gabriela's "Hippie message of the night" was for everyone to please recycle more! Thank you so much, bye bye! There was a standing ovation - of course - and Rodrigo, Gabriela and Dudamel all took a bow together before the L.A. Phil left the stage. There was a brief intermission before Rodrigo y Gabriela came back out together, just the two of them, and sat down on the lip of the stage to fully enchant the entire Bowl with just two people and two guitars. They play off of each other so well, with Gabriela's rhythmic percussive playing and Rodrigo's intricate finger picking ... the two parts make up a majestic whole. It was just SO beautiful ... and the entire audience was on their feet clapping along for the remainder of the show - even a little baby in the box next to us was all about clapping along, in a show that was truly one for the ages - and all ages.

For the final set, they first teased Extreme's "More Than Words" to laughter, before we were really treated to "Cumbe", "Echoes" (a Pink Floyd cover), and their own classic, "Diablo Rojo". People couldn't get enough of it, but it had to end, and did with another thunderous ovation for the remarkable talent of Rodrigo y Gabriela. Again ... WOW. Everyone was still bouncing from it as we all danced out of the aisles and out into the Los Angeles night ... truly feeling grateful for having lived this life in this moment, as Gabriela had said. This was a show we won't soon forget, and I'm so happy to have finally seen this delightful duo play live.

What a wonderful start to Mexican birthday week! Gracias!!!