After more than a decade of effort and tireless work on the behalf of many Venetian activists, the Venice Japanese American Memorial Monument (VJAMM) is in its place on the corner of Lincoln and Venice Boulevards, and was officially dedicated this morning in a touching, long anticipated ceremony. 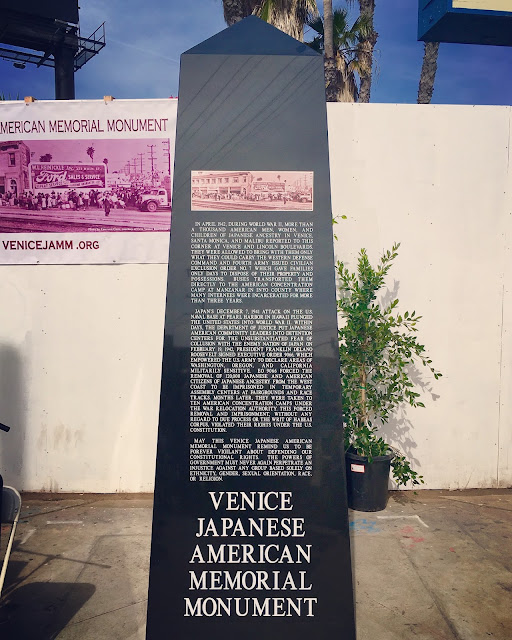 A crowd gathered in the bright sunshine there on the Northwest corner at the intersection that serves as a gateway to Venice, where chairs and a podium had been set up next to the monument for its dedication ceremony featuring speakers who had helped to make this important historical reminder a reality. 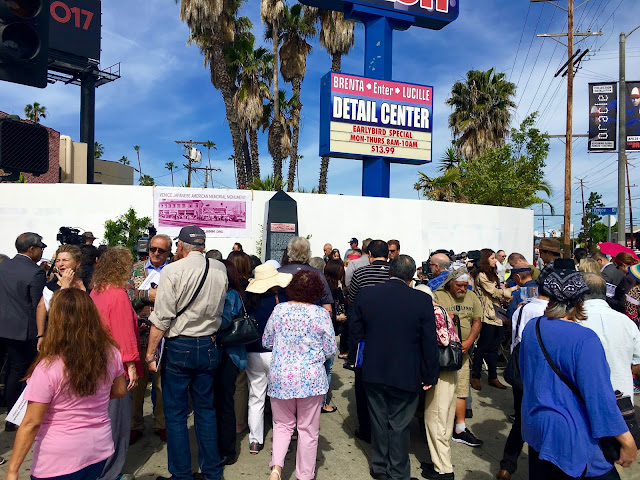 VJAMM Committee member Phyllis Hayashibara served as our M.C., and welcomed everyone to this special event. It was very touching to look around and see the many elderly Japanese faces present to witness this ceremony that shone a light on this dark part of our American history. 75 years ago, Franklin Delano Roosevelt signed an executive order demanding that Japanese citizens be rounded up and shipped off to internment camps. They were given as little as hours to liquidate their entire lives, and pack only what they could carry with them to take along with them to destinations unknown. For most, the destination was the camp at Manzanar, out in the desert in Inyo County, where they would remain for up to three years. Most lost everything. 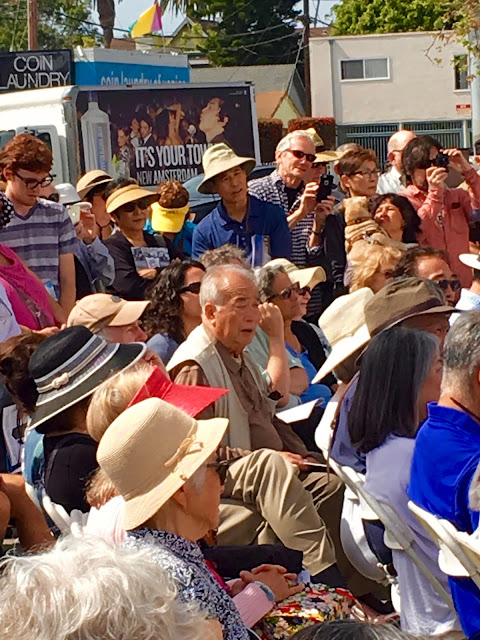 The VJAMM was conceived to be a living reminder of what happened, in order to learn from our history and make sure it never happens again. Ever. Jim Smith spoke, and apologized for the earlier Venetians who did nothing to stop this. We were all standing at the very site where the Nisei (Japanese Americans) had to line up to be taken away, and the emotion surrounding that fact was tangibly felt, and visibly seen on many of the faces assembled.

I definitely wiped away a few of my own tears, because I was born and raised in Minnesota next door to the most beautiful family possible, the Kusunokis. The Japanese Kusunokis came to Minnesota from California, where they too had been forced to live in a camp. These were and are the kindest, gentlest  people I've ever met, and to think that THEY had to be put through this brought angry tears to my eyes, and a lump in my throat that rendered me almost speechless throughout most of today's proceedings. It was all so very, very wrong.

The important message of this VJAMM is, of course, to never allow this to happen again to anyone. Committee member Suzanne Thompson had everyone repeat that very phrase after her at the top of our voices - "This must never happen again to ANYONE!" - and did so because the threat of this kind of racism disguised as nationalism is very much a possibility again in today's awful political climate. It's scary, but this morning showed that there remains a very diverse group of people coming together to guarantee that this cannot and will not be allowed ever again. 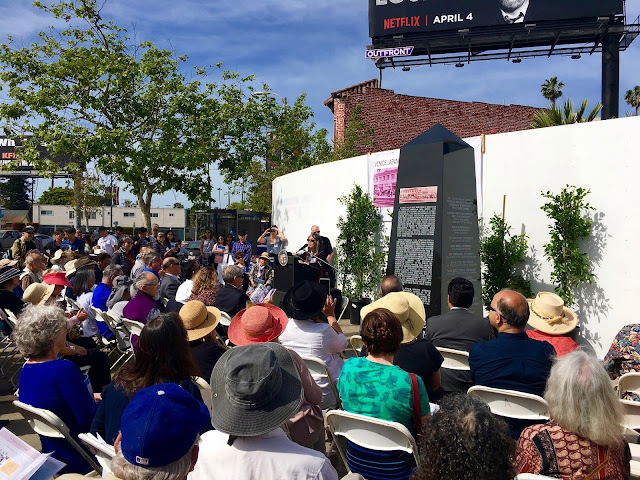 Former Councilwoman, Ruth Galanter repeated the quote that "Eternal vigilance is the price of liberty." A scroll was read from Mayor Eric Garcetti, making the VJAMM official, and urging us to remember the past for the future. This elegant, inscribed black obelisk will make sure of that. Memorials are only as good as the remembrance to apply those lessons learned to today. Zev Yaroslavsky was a speaker, and said, "We have an obligation to carry out what this monument stands for." Former Santa Monica Mayor, Kevin McKeown asked that the phrase "Never Again" not be just a reminder, but a rallying cry. Just as this was said, a car driving by the proceedings honked its support, as did many throughout. Solidarity.

Jeff Burton, a ranger from the Manzanar National Historic Site invited people to come out there and see it for ourselves, and learn about this shameful past, so that it cannot be repeated. Dr. Jimmy Hara and Dr. Thomas Yoshikawa were born in internment camps, and are working on a petition with actor, George Takei, to stand up for Muslims in today's situation. What a beautiful thing, because they know how it felt/feels. This brought another welling of tears, for sure.

The keynote speaker was Warren Furutani, who after being introduced said that he liked to look at the faces looking at him, and how it was no surprise to him that this monument should be here in Venice. "Activists can be pains in the ass, but activism makes things happen." This was met with much applause and shouts of "Resist!" by the many pains in the ass in attendance. "Executive orders must be challenged. We must push back, we must stand up, and we must make our voices heard." All were in agreement, including more cars going by and honking. Furutani went on to say that he knew in time, this monument would be defaced, and said that when it does, to not clean it off. It should be left there as a reminder that our work is still not done today. That was heavy. Though his point was well taken, the VJAMM will be maintained, and should be, as it's beautiful and so richly deserving of respect. 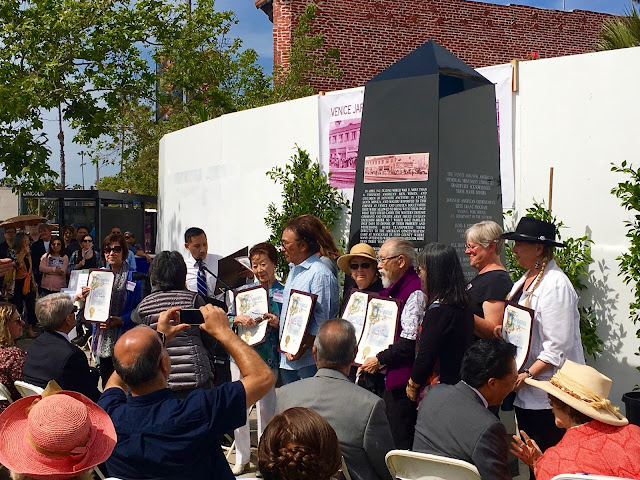 He spoke about how as kids, when others were talking about the kind of camp where you make lanyards and sing campfire songs, the Japanese kids knew differently. Children showed up at school and all the Japanese kids were just gone one day. This busy corner of Venice will now serve as a beacon of our progressive values and intolerance for systemic racism, for generations to come. This is a place that fights for freedom, liberty, and justice ... and no amount of gentrification can change that core of Venice, as was clear by the many truly vigilant citizens present this morning. We're still here.

VJAMM Committee member Brian Maeda read quotes from the internees who were in the audience, and had them stand up to be recognized. You just wanted to go up and hug and profusely apologize to every one of them, but it was striking how graceful each of them were about it, accepting their acknowledgement with humble and grateful waves to the crowd. Committee member Emily Winters spoke, and I couldn't hear a thing (it's a loud corner) but I did hear her graciously thank all of the supporters, of which there are many. Committee member Suzanne Thompson led the aforementioned rallying cry, that this absolutely MUST NEVER happen again to ANYONE, and talked about how the VJAMM will be used as an educational tool, with curriculum available at VeniceJAMM.org. 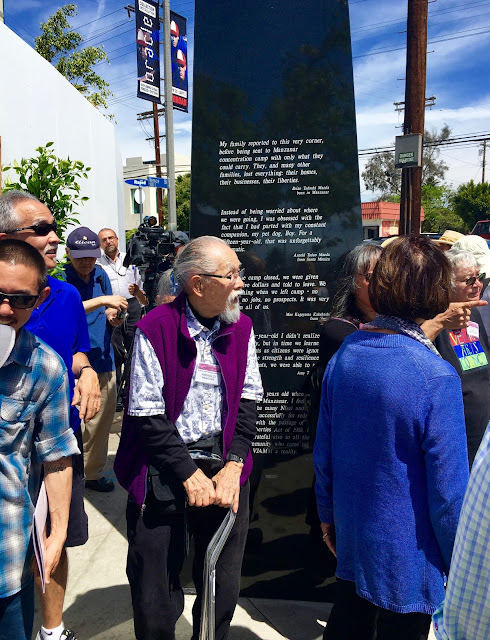 Phyllis Hayashibara wrapped it all up by thanking everyone, and inviting them back to Hama Sushi, where Esther Chaing is donating 100% of the bento box lunch today to the VJAMM fund, and tonight from 6:30-10:30, 10% of all Hama sales are for VJAMM. Let's all head over there and have sushi for a great cause!

This is a very special day in Venice, and I'm so proud and happy to be a part of a Venice Community that always strives to do the right thing. It took a lot of work to make the VJAMM happen, but it ultimately did. This should serve as encouragement to us all ... that the important things still matter, that the heart of Venice is healthy and pumping, and for all of this, we WILL remain vigilant.