Damian "Junior Gong" Marley In Conversation At The Grammy Museum

Music has really been stepping up to save me lately, and last night was no different. Damian Marley was at the Grammy Museum for a conversation about his new album Stony Hill (to be released July 21). "Junior Gong" Marley has been one of my very favorites ever since his Welcome To Jamrock album came out back in 2005. Because it's the best. As it's been so long since then, I was thrilled to get to hear the new music in a listening space fit for maybe 200 people ... and so was the superfan sitting next to me (Hi Shannon!). She could barely contain herself, and I totally understood. 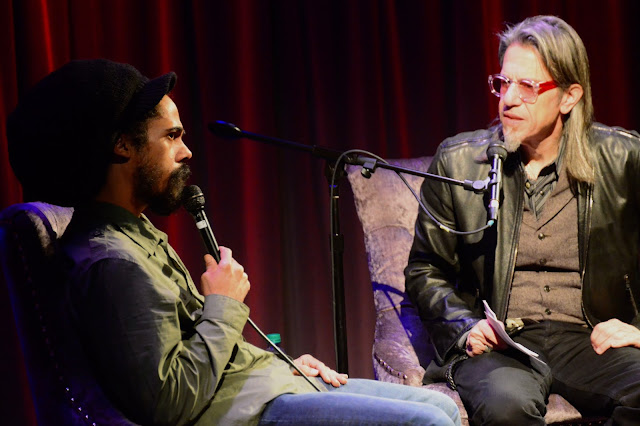 Scott Goldman, the newly named Executive Director of the Grammy Foundation (which merged two days ago with the Grammy Museum), introduced Marley, who took the stage to a roar of applause, saying "Greetings, Everyone!" Dressed in a military style shirt and jeans, with his long dreads tied up in a cap, he settled into a chair on stage to chat with Goldman about the new album. Of course, Marley hasn't just been chilling the last twelve years, he's been involved in all sorts of projects, like Superheavy (his super group with Mick Jagger, Dave Stewart, Joss Stone, and A.R. Rahman), Distant Relatives (his album with Nas), recording projects with other members of the Marley family ... in short, real busy. Or in his words, "Just life."

When Goldman noted that the new album had been delayed with its release since last fall, he asked Marley how he knew when a track/album was ready. Marley replied, "You just let go. See how it feels. We're perfectionists, so when the music feels right, it feels right." Marley mentioned how he has also never released a song without his brother, Stephen Marley's thumbs up. "We have that trust from growing up together, from him tying my shoelaces until now." When asked how his songs start, Marley said that they were mostly an idea or a thought, and that he mostly begins with the music. He's now into experimenting with "Jamming in the moment" - which I would love to be there for.

We started the listening party with the track called "Caution", which is Marley's homage to Black Uhuru, whose music he grew up on. His main inspiration after his own family's music was the 80's Dancehall music coming out of Jamaica with musicians like Shabba Ranks, etal. The song definitely had that feel, and I was/we were immediately transported to a mellower time. A FUN time. 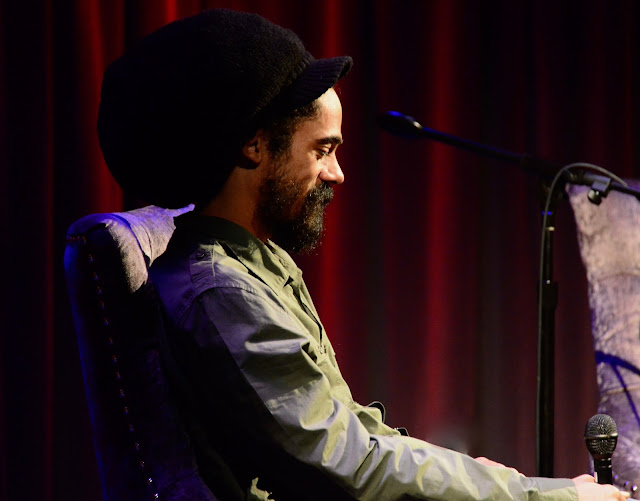 Goldman and Marley next talked about his video for his the first song released off the new album, "Nail Pon Cross", and the religious imagery it contains, which Marley has received some heat for. His main idea about it is "Judge not before you judge yourself. Check yourself." Right on. Marley also noted that crucifixion was the way of capital punishment back in the day, so Jesus Christ was just one of many that was nailed to a cross. Also, he's more interested in how people interpret the music for themselves vs. him telling them what to think about it, as all the best songwriters are.

With the worldwide acceptance and love of reggae, Goldman suggested that Marley might be in a unique position to make social commentary, and maybe speak out more than others. Marley explained that for him it's just organic to address important topics, and he feels he has a responsibility to stand up to oppression. Goldman asked why that was important to him, and Marley replied, "Because I don't like it." It was so charming and honest and kind of "Duh", that everyone laughed, and loved him even more (I know because it was stated several times). 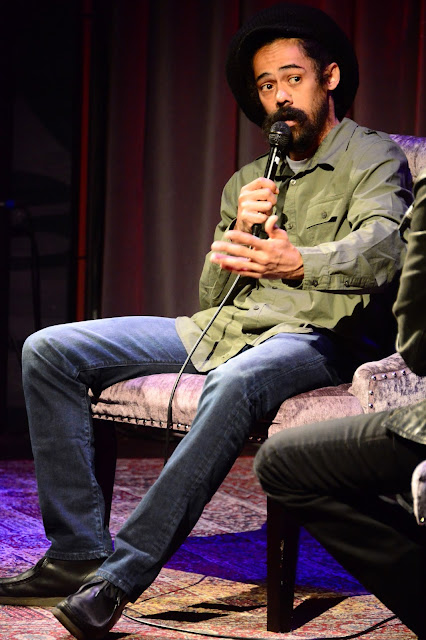 We next heard a track called "Here We Go", that featured a Dennis Brown sample. This one sounded like Jamrock Gong, and it was both fun and kind of weird to listen to it with him sitting right there, nodding along with us.  One line goes, "I'll finish what Bob Marley started", and he's doing just that. It was RAD. He explained that with samples, it's mostly just vibes he gets, what catches his ear, but with this one, it was what Brown was saying ... "Here we go". And we will gladly go along with him, as when Goldman asked Marley if he ever worried that his audience would have moved on in the last decade, one woman correctly yelled, "Never!"

"Everybody Wants To Be Somebody" was a Wailers-esque track that Marley intended to help connect generations. "It's important to know your roots, not just in music, but in life." So very true, and those Wailers roots are clearly strong. "Medication" was next, and an obvious love letter from Marley to marijuana. He sings about its fingers running down his spine and croons, "I love you, Maryjane". At the song's end, Goldman said, "This is a topic you know a bit about", which got laughs because we could all smell it lingering in the room, but also because Marley is in the actual business of cannibas. He has a dispensary in Colorado, where it's already legal, and has turned a former prison in California into a grow house. "I got a prison to grow weed in where people used to be locked up for weed. A new frontier is happening in real time now. I'm looking forward to Jamaica legalizing it." - which I cannot believe it is not, having spent time in Jamaica with abundant ganja. It's time, Jamaica. 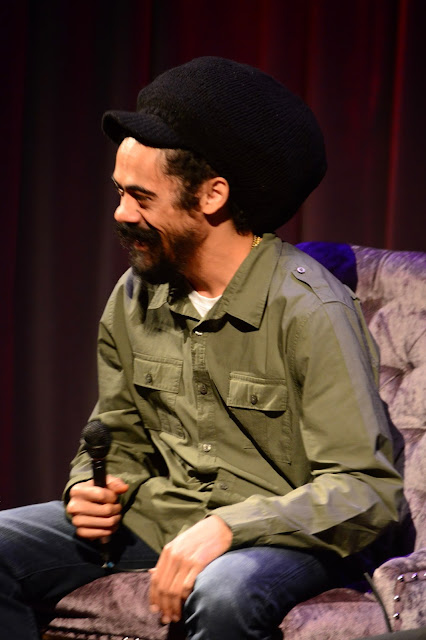 Marley lives in the dichotomy between two worlds, his Uptown comfortable upbringing and his family's ghetto roots, which he addresses in his track, "Living It Up". This one has a kind of 70's disco vibe, verrrry groovy. It features shout-outs to the townships in Jamaica that made up Marley's childhood, and is an answer to those who think Marley doesn't have any business talking about the ghetto. "In Jamaica, there is nowhere far. You might be living in the ghetto, but you can see it." Marley sees both sides, and indeed, has family and friends make him remain a part of both. His album Halfway Tree was named for the spot halfway between both, and Marley's hope is that he can get other people to that level too. "The greatest thing you can do as a person is to help other people", Marley stated sincerely, to appreciative applause. It's the best when the artists you love are also good people.

"The Struggle Discontinues" is Marley's attempt to get people to see themselves not as strugglers, but as conquerors. The song asks, "If the struggle continues, then when will we overcome?" A perfect question for now. JA Mon. "I don't want to sing a song that says the struggle lives on ... Right here and now the struggle ends, prosperity from now on." I am fully on board with that, and with this song with its classic reggae beats. The album was recorded in Miami at the family studio, and at Henson Studios here in Los Angeles. Aston Barret, Jr. plays bass on it, and that helps with that classic Wailer sound. Marley has always been more modern, so with this one, he was trying something new by trying something old. It works great. 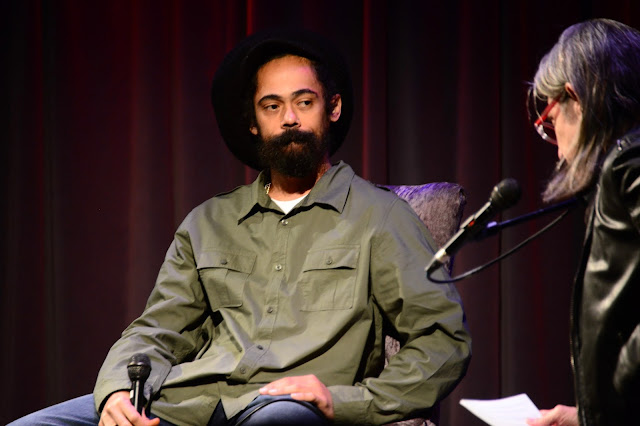 Marley is known for the massive energy of his live shows, and said he definitely thinks about how they'll be performed live when the songs are being recorded, but often when played live they almost become remixes, because they jam and change them all the time. No one in this room could wait to hear these songs live after hearing them being discussed with him, believe me.

The youth are important to Marley, and "So A Child May Follow" is a song that talks about the influence that musicians have on children, but also giving "Big Ups" to the young musicians playing themselves. It featured a heavy keyboard intro, and acoustic guitar that make it the most bare and raw track, standing out from the rest, as Marley urges the listener to enjoy the moments you have NOW. 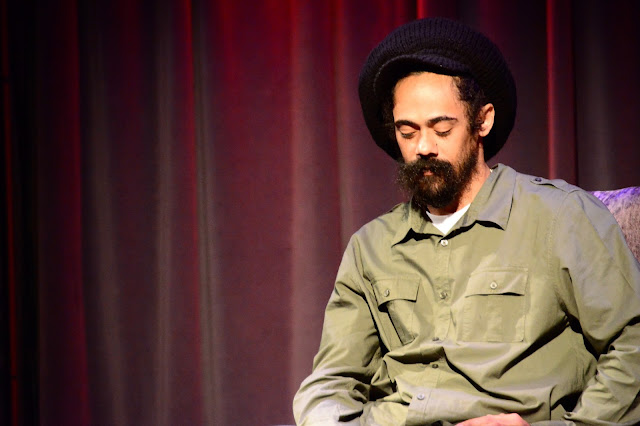 In talking about Superheavy, Marley said that Mick Jagger has not lost his love for recording music, and is "still fit", earning some laughs. He said that Dave Stewart finally taught him why guitar players have so many guitars. The many different SOUNDS. Stewart taught him a lot about the sonics of guitars, Marley said, making us all want to be flies on that wall.

Goldman opened it up for a Q and A, that was mostly just everyone begging him to play somewhere - one guy even asked if he could do a little something a cappella right then, to which Marley simply said, "No." When asked what he was listening to, he said Third World, who he's working with in the studio, which was great news. He'll be playing Africa in May, Sir. He listens to West Coast Hip Hop, and his favorites are Snoop, Tupac, and Dre. There are no plans for a Distant Relatives 2 at this time, but they'd both love to. He WILL be at The Dub Club tonight. His family is so vast, he's not sure if someone is planning an Eco-Resort in Jamaica. He didn't put this album out independently because he's still on his Welcome To Jamrock label and owes them one. Contracts and all that. He keeps his faith by being himself, and family, friends, and Jamaica itself keep him down to Earth. He considers himself a Spiritual Revolutionary, and thinks it's important to have spiritual discussions evolve to be about now, not scripture from thousands of years ago. Amen. Awomen.

"Speak Life" was the final track we heard, and the final track on the album. Marley explained that "Word sound has power that goes out into the world and affects the energy around you. It's a very cinematic track, and you could see it as a montage soundtrack for a great movie about keeping your head up and focusing. It was great, and we all nodded along together in agreement until it came to it's end with a flourish. We all clapped for Marley and Goldman, and as we ushered out of the Clive Davis Theater, I was again reminded of the power of music. I hadn't thought about my own problems or the great problems of the world (outside the context of his songs) the entire time. I really needed that last night, and I don't think I was alone in that, as everyone expressed deep gratitude upon leaving. 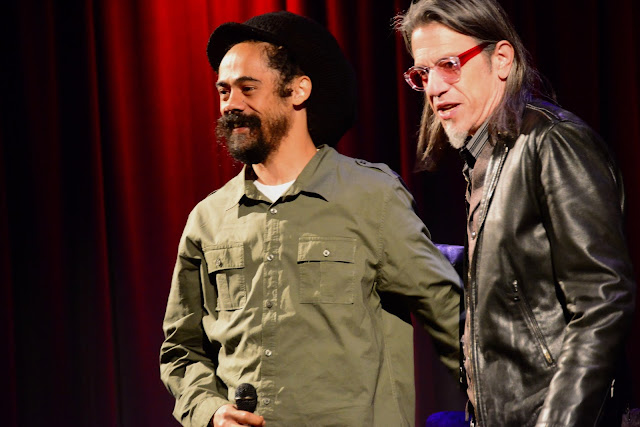 I remember in Jamaica while staying at Jakes's in Treasure Beach, and one of the DJs asked if I liked "Traditional or Contemporary Reggae". At the time, my answer was probably traditional, but Damian Marley is the one who bridged them both together for me. Get Stony Hill, you will love it. And do not miss a chance to see Damian Marley live ever. It's something else.

Thank you to the Grammy Foundation for another wonderful night of music!

*All photos by Paul Gronner Photography.