Paul Simon: Words & Music, the wonderful new exhibit at the Skirball Cultural Center opens to the public tomorrow, and it's something else. This traveling show from the Rock and Roll Hall of Fame is making its only West Coast stop at the Skirball Center - and lucky for us. If you love Paul Simon - and I do - this is truly an exhibition that you must not miss. 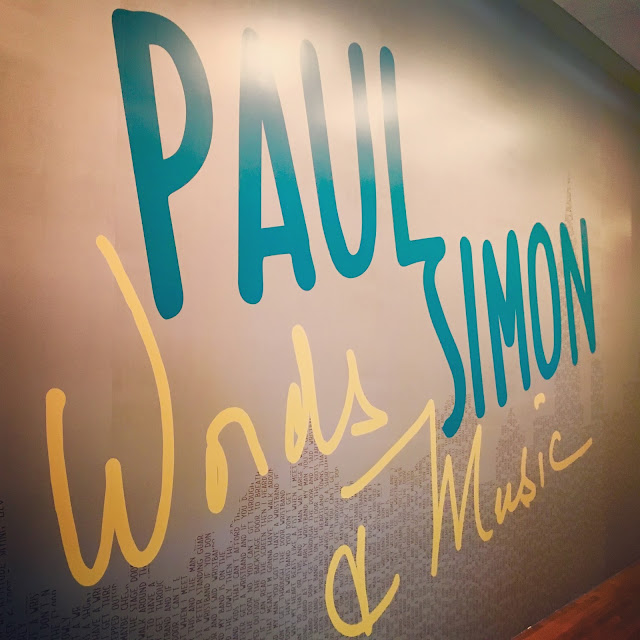 The show takes you into Simon's life through his creative process, from his birth on October 13, 1941 in New Jersey, all the way up to right now (Simon performed at the gala opening last night at The Skirball). This is a comprehensive study of one of our most beloved American treasures. 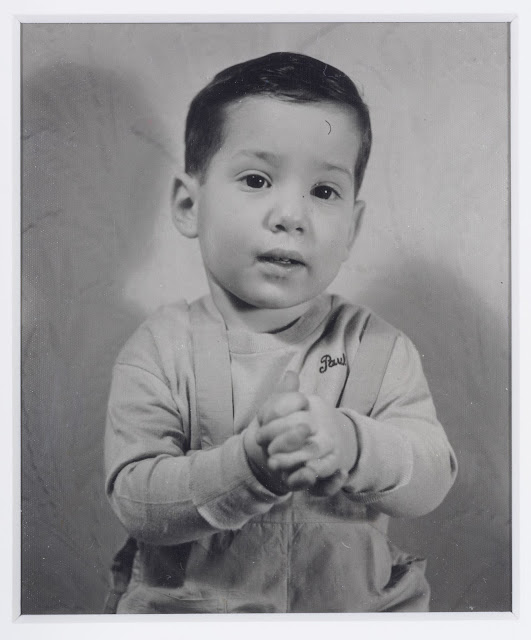 Skirball Museum Director, Robert Kirshner gave the opening remarks, and told us that many of the Simon artifacts have never been seen before, because the Rock Hall simply didn't have the room. Again, lucky for us. Kirshner spoke to how The Skirball strives to build community through bridging cultures with musical collaborations, and who better to showcase than Simon? His music is "an exercise in musical democracy," as Kirshner put it, and has always reached across societal lines to include everyone. Think about it. Everyone from Grandmas to babies loves some Paul Simon. It's impossible not to, as each and every song is so beautifully crafted and gloriously written. The soundtrack to our American lives since the 60's, really. 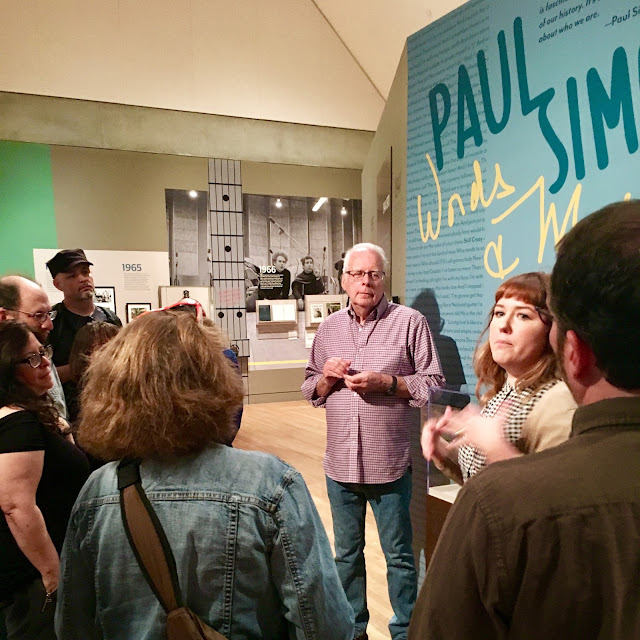 I was invited to the press preview, and it was great because the group tour through the galleries was led by both Skirball curators, and one of my favorite music writers, Robert Hilburn (former LA Times music critic, now writing the official biography of Paul Simon). It was great to hear about it all from Hilburn, as he's both super knowledgeable about the man, but also very enthusiastic ... touchingly so. He told us how when Simon was a kid, he was never even into music (his Dad was a musician), as he was totally obsessed with baseball. Hearing "Gee" by The Crows as a young boy changed all that, and he asked his Dad for a guitar on his 13th birthday. The rest is American History. 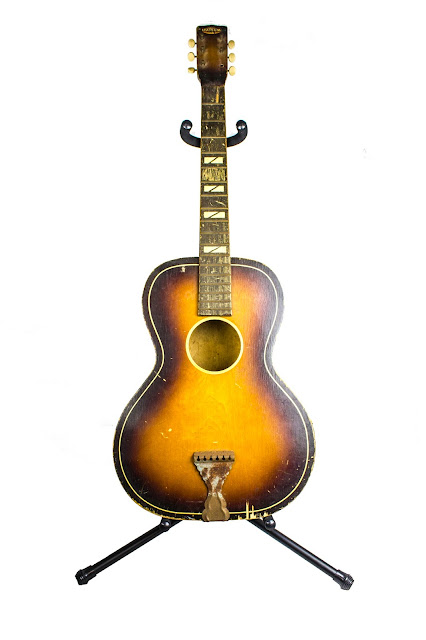 Courtesy of The Skirball/Paul Simon Collection

Simon met Art Garfunkel in elementary school, and they soon began to write songs together. There is a sweet letter on display from Simon to Garfunkel at summer camp, talking about songs he'd written (and telling him to greet all the good looking girls for him). Back from camp, they began to play their songs out, and were known as the duo "Tom and Jerry". 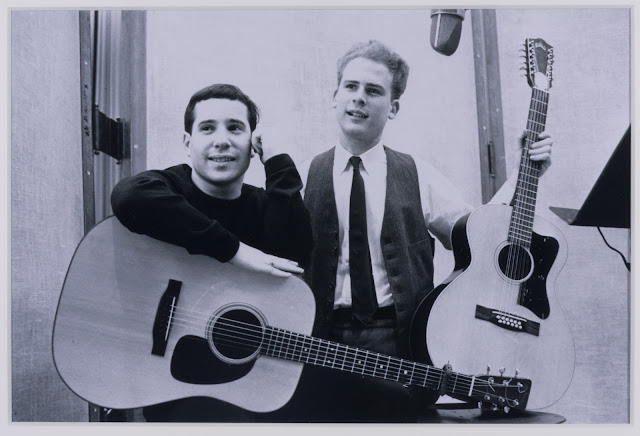 After a bit of success in the pop world, the duo decided in the early 1960s that they really liked folk music - and had something to say. One executive told them that they should be confident and proud with what they were saying, and to say it in their own names. Simon's response was "Who wants to hear the truth from two Jewish boys from Queens?" The answer was everyone, because their "The Sound Of Silence" blew them into the stratosphere ... which is funny, because they didn't even like the original version that was fully re-mixed in London with other musicians. The musicians decided the success should be credited to their rightful names, and they were now known as Simon and Garfunkel. 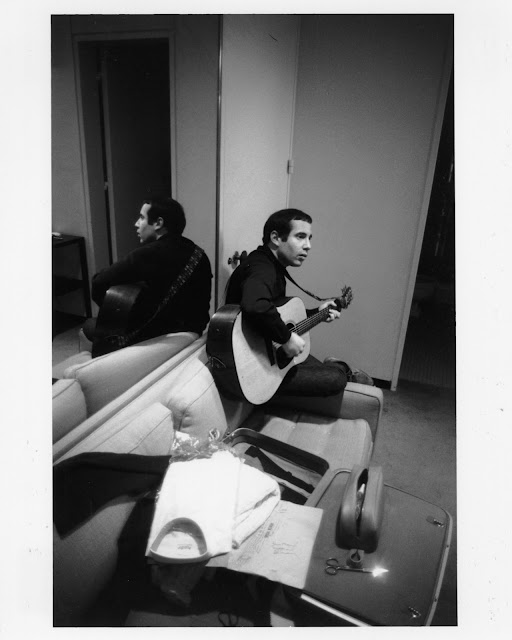 Courtesy of The Skirball/Photo by Don Hunstein, 1967/Sony Music

Simon and Garfunkel had massive success, as we all know, but it only lasted until 1968, when they broke up due to well-documented personal differences. This would not deter Simon in the least, as he went on in the early 1970s to have his first two solo albums surpass even Simon and Garfunkel's best. There are many photos, documents, posters, videos, memorabilia, lyrics, and instruments to support all of this history, and they all give an incredible insight into who this Simon guy really was and is. For instance, did you know that the song "Mother And Child Reunion" is about a chicken and egg dish at a Chinese restaurant? It is. 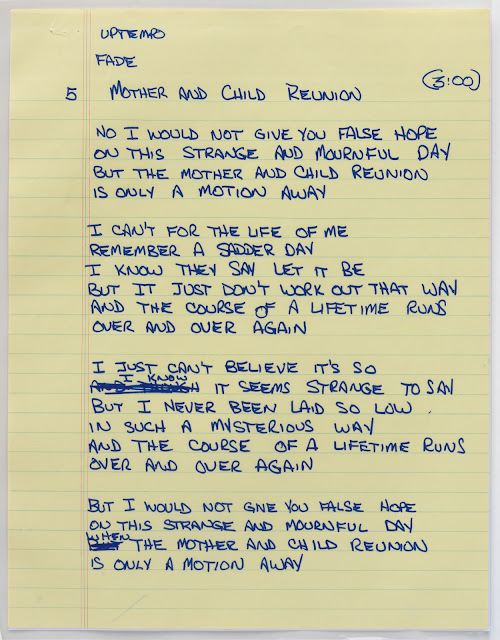 Simon kept an impressive personal archive, and his hand written lyric sheets are all there. There is an in-flight magazine from United Airlines featured that shows how Simon wrote the lyrics to "The Boxer" all over its margins during his flight. Awesome. 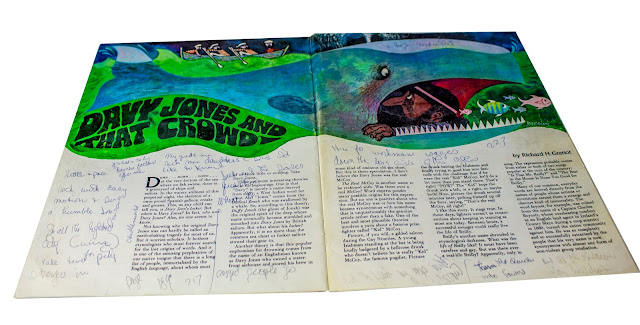 In the 80s, Simon experienced a slump, having split up with Carrie Fisher (RIP) and had two of his albums in a row completely flop. Around this time, Simon became very interested in World Music, especially that coming out of South Africa. Every executive told him not to experiment with that, that it would never sell. Simon pretty much shrugged and said he wasn't selling anyway, so he was going to do what he felt passionate about. That resulted in his best-selling record ever, the Grammy Album of the Year in 1987, the crucial, must-have Graceland. So THERE! 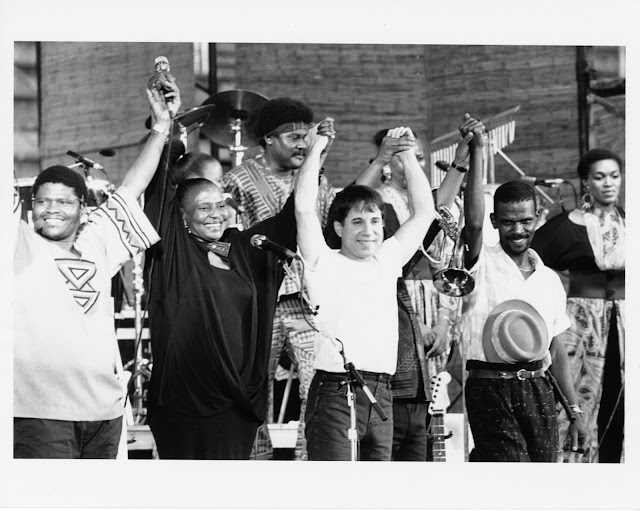 There are decades of Simon albums, and he has won Best Album in three different decades. Simon is a proven classic, and fully permeates our popular culture. There is a living room set up in the exhibit to show what it would be like to sit and watch Simon on Saturday Night Live in the 1970s - as Simon is a member of the SNL 5-Timer Club, with that member's jacket on display. This might be because Simon is best friends with SNL creator, Lorne Michaels. After 9/11, Michaels had to decide what to do for their first show after the horrors, and he chose Simon to open the show by singing "The Boxer". I remember it. I felt the same lump in my throat today, but like then, Simon made it better. 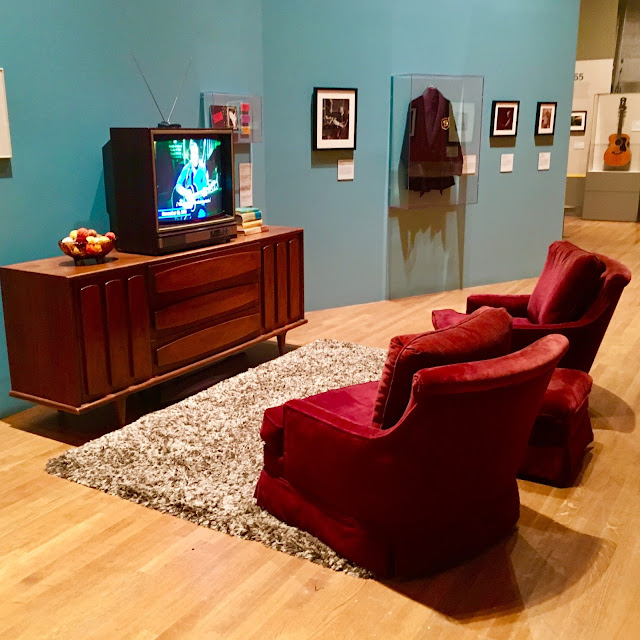 Simon makes many things better, as he is also a noted philanthropist, but as Kirshner said, the most respected Jewish people are the ones that are philanthropic without boasting about it, which Simon never has. He's just invested in the world around him, from "We Are The World" to founding The Children's Health Fund. In a word, he's a mensch. 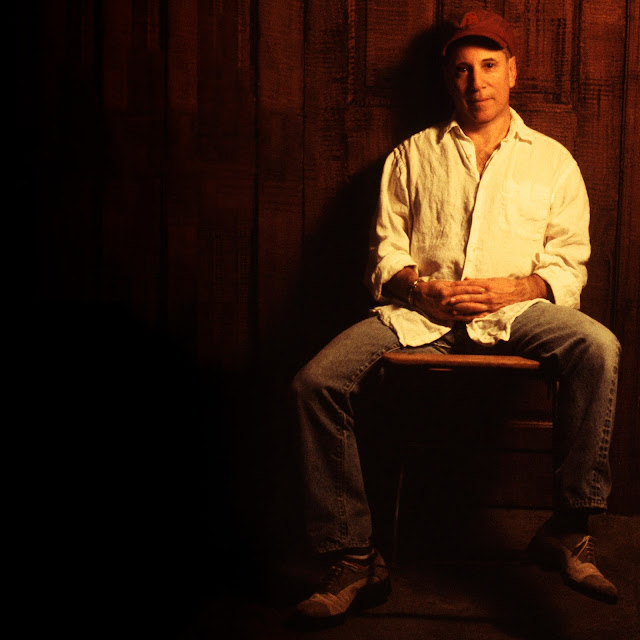 Courtesy of The Skirball/Photo by Lynne Goldsmith, 2000/Paul Simon Collection

One of the coolest parts of the Simon exhibition is the Music Lab, brought to you by the Roland Corporation. One gallery has been set aside for an interactive musical extravaganza, that allows the viewer/listener to try their own hand at experiencing Simon's creativity. There are multi-tracks that allow you to isolate the separate musical parts of classic Simon songs, "like the ingredients of a cake that are separated out," according to the Roland rep. There was a harmonizer machine that let you put on headphones, sing "Kodachrome" into the microphone, push a harmony button, and suddenly you're harmonizing with yourself in four parts with Paul Simon. Pretty rad. 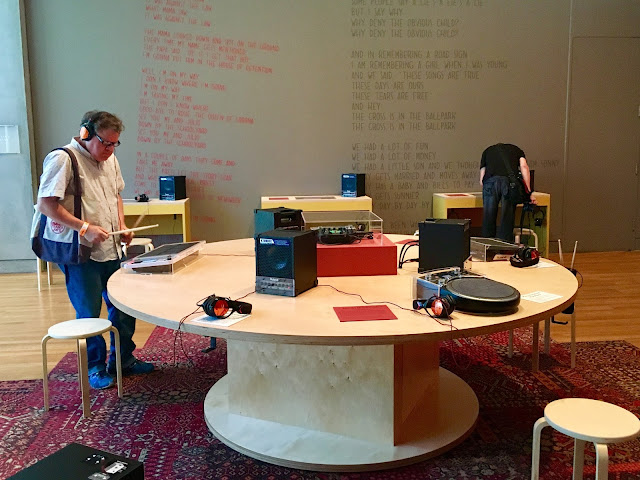 You can bang along on drum machines, isolate instruments and swap them out on sample boxes, or try out a "Chromelodeon", a keyboard invented by Harry Partch to include 43 other extra tones, rather than the 12 on a regular keyboard. That was very cool, and very open-minded of Simon, who has always loved to experiment, always kept writing, and always stayed passionate about his music. I'd never even heard of that Partch thing, and now I just want to play on it all day. Simon is interviewed in several listening stations around the exhibition, and you could spend all day learning about his craft ... basically because he seems pretty down to earth, like he'd be fun to hang out with. And you'd definitely learn a lot. 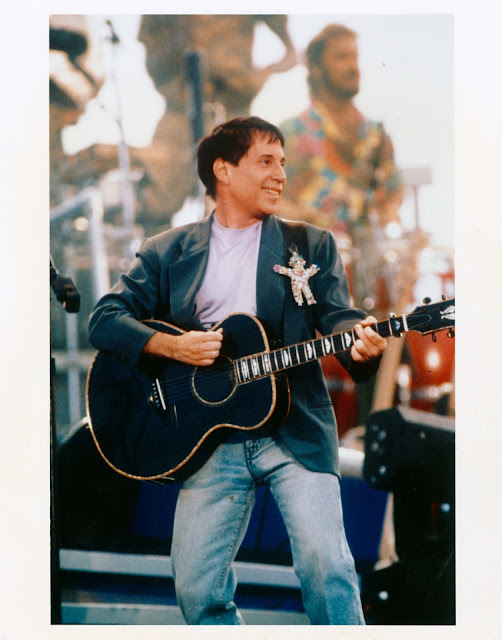 Courtesy of The Skirball/Photo by Nick Elgar, 1991/Paul Simon Collection

We did indeed learn a lot today, and what a wonderful glimpse The Skirball and The Rock and Roll Hall of Fame have put together for the public into the life of one of our most prolific and well-loved American musicians. I've been humming Simon songs non-stop since I left, and guarantee that you will be too when you leave this excellent portrait of a musical legacy given to us by Paul Simon.

Thank you to one and all involved.