Last night was a wonderful celebration of Art and Venice, when the Venice Art Crawl had its big art show fundraiser, held at the brand new Hal's in Playa Vista. 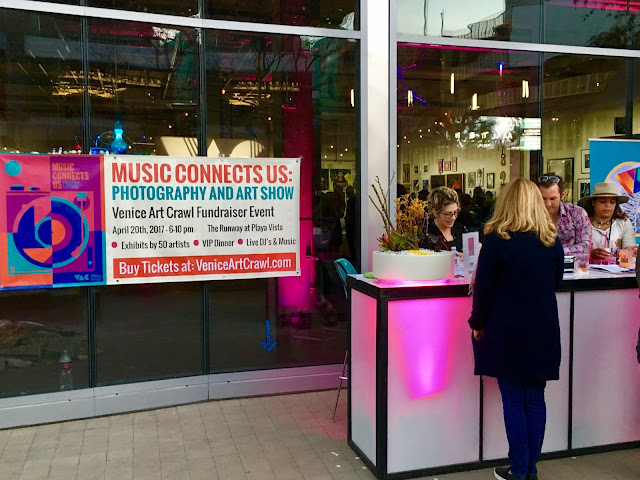 The show was titled "Music Connects Us", and featured works of art all based on music and the people that make it. Hal's Playa Vista is now not only a restaurant, but they have a huge event space next door, where this massive (75 Artists!) art show was held. 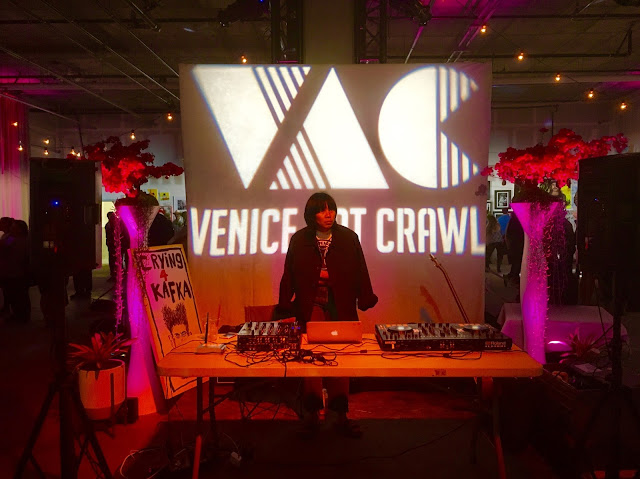 The place was already packed when I arrived, and musicians played outside on the sidewalk while people got checked in. It was very festive, and not just because it was 4/20. People were ready to party. The art show part was a sober party, however, as the big space is not zoned for alcohol use, I guess, so the bar in the space was only serving kombucha drinks. Some Venice folks had flasks for this rock and roll show. Bless. 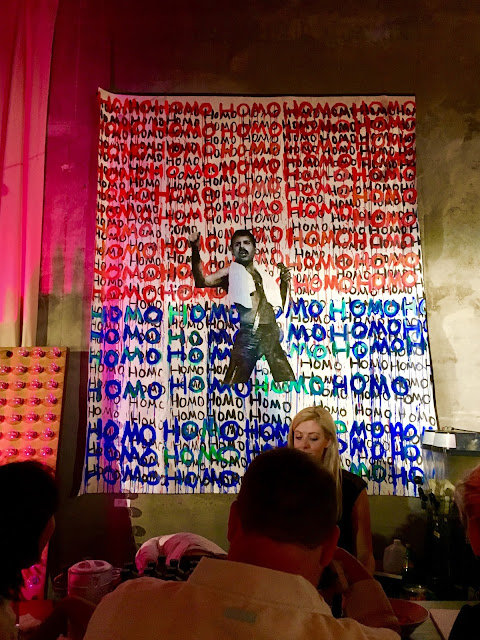 VAC organizer Sunny Bak was there, and so were her excellent Beastie Boy photos ... 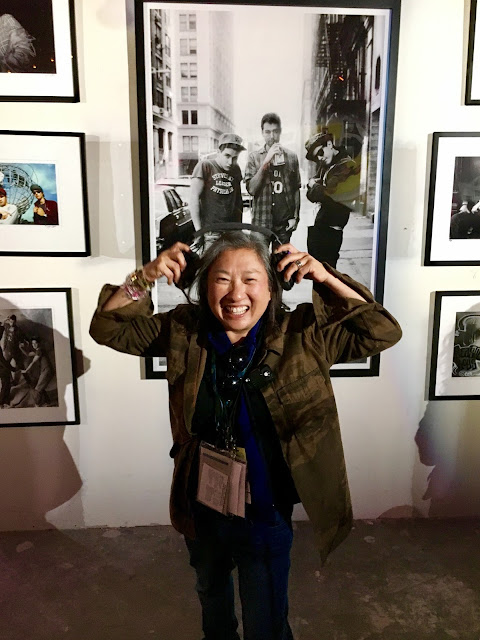 Co-organizer Neely Shearer from the wonderful Venice shop, In Heroes We Trust was there, looking great and making the rounds among all the artists she had helped compile for this extra-impressive show (here in front of Jules Muck works). John Hartman, pictured here with Neely, was responsible for the design of the space, which was great. 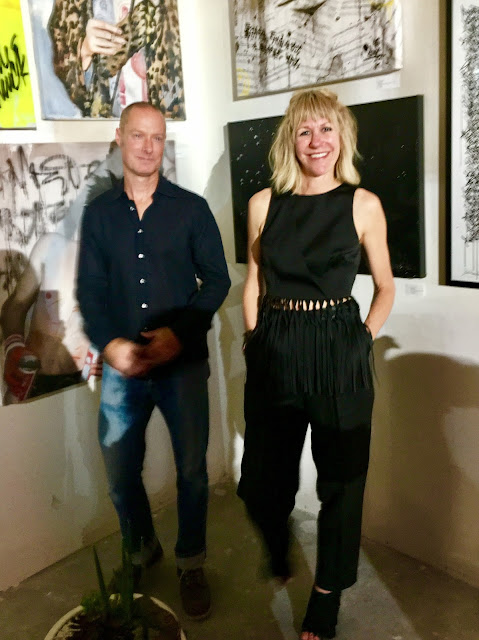 Today is the first anniversary of our beloved Prince's death, which I'm really still not ready to face, if I'm honest. The show last night seemed to agree with me, as several of the artists had pieces featuring our Minneapolis legend. I wish I could have bought them all. Like "Prince of Rock" by Todd Goodman ... 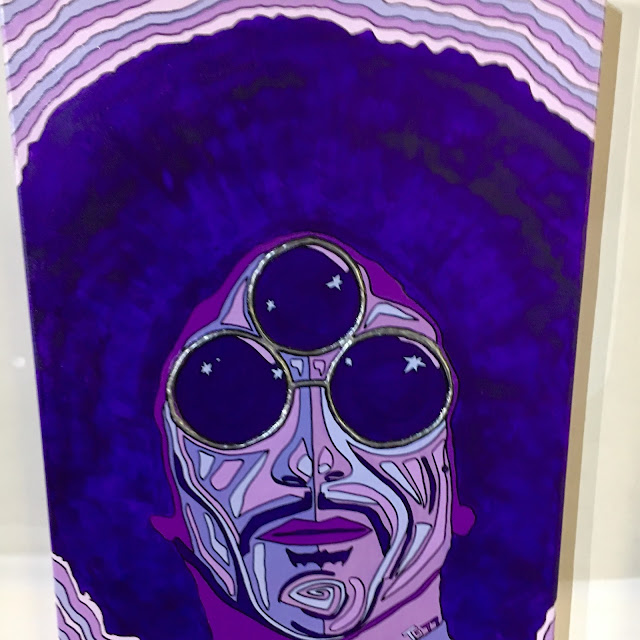 Or "Prince The Vegan Rebel" by Le Fou/Vegan Club (my favorite, I think) ... 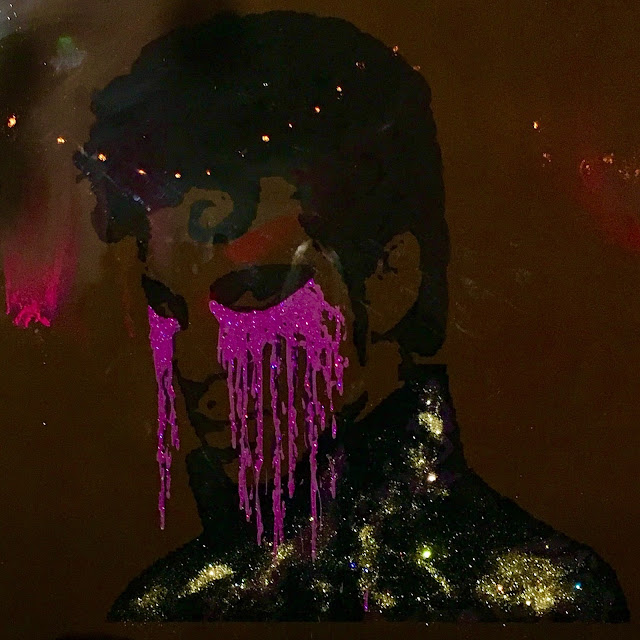 Or this angelic Prince by Made Of Hagop ... I'd take any of them, for sure. 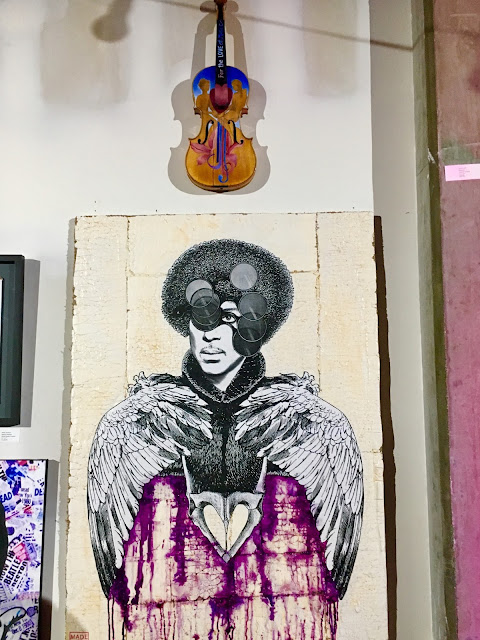 I also loved the rare, casual photo of another life-love of mine, Mr. Leonard Cohen, by Ivy Ney. 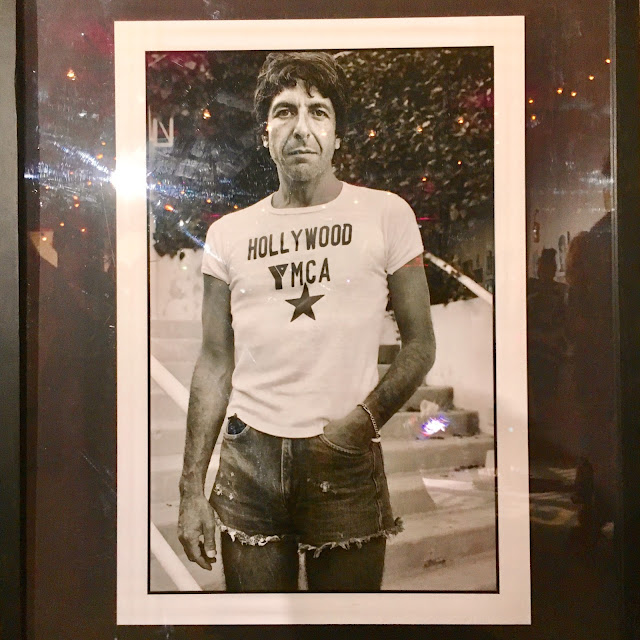 I loved the colorful music posters by another Minneapolis fellow, Kii Arens, who also did the poster for this show. Fantastic, bright paintings by Oliana Afano lit the place up ... 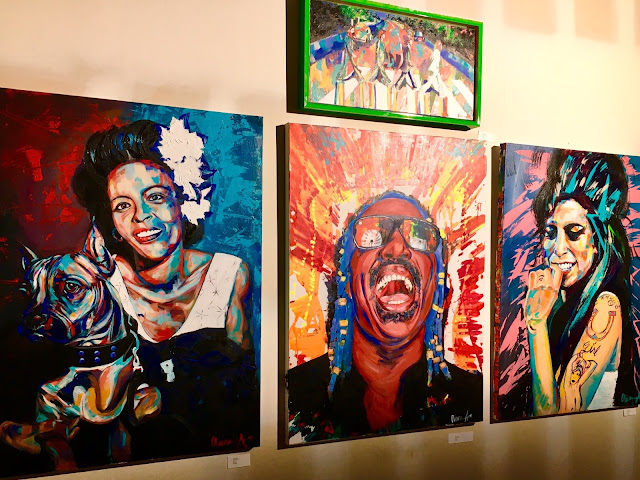 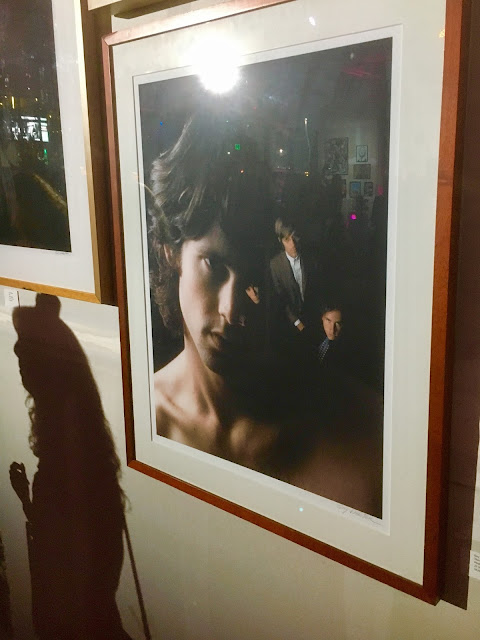 Nat Fino had some great Bowie and Stones work on display, adding to the rock flavro ... 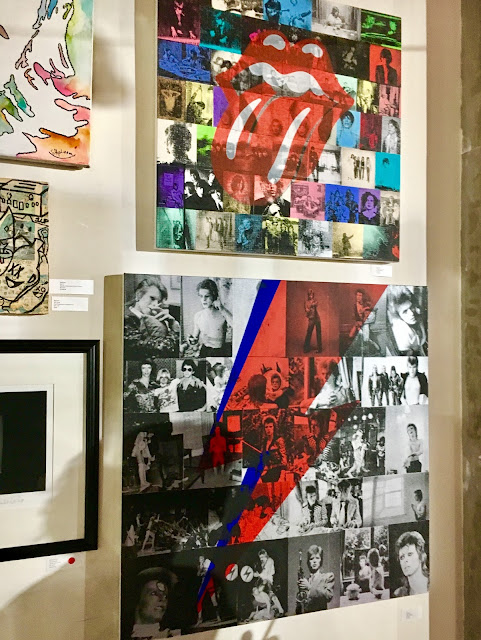 There were art installations set up around, like a big yurt with balloons and neon jellyfish by Shana Koenig inside and around it ... 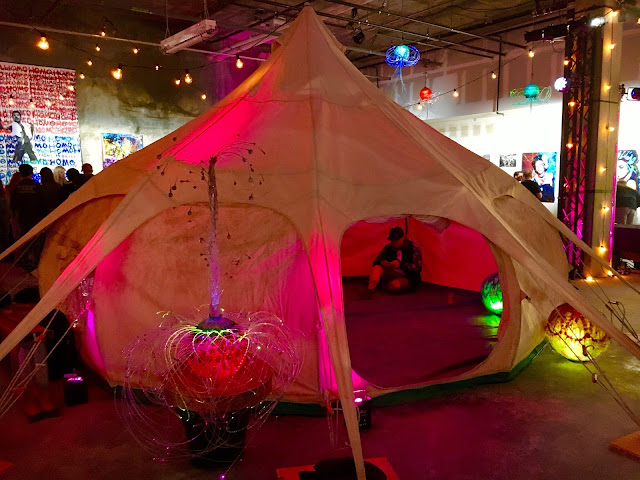 There was a Plastic Jesus installation of a smashed piano that had a sign stating "Trump's Endowment for the Arts". Sad commentary on now ... but we were all there to fight exactly against that. Art is so important, and nights that brings everyone together to honor and celebrate it is what has to keep happening. Art is worth fighting for. 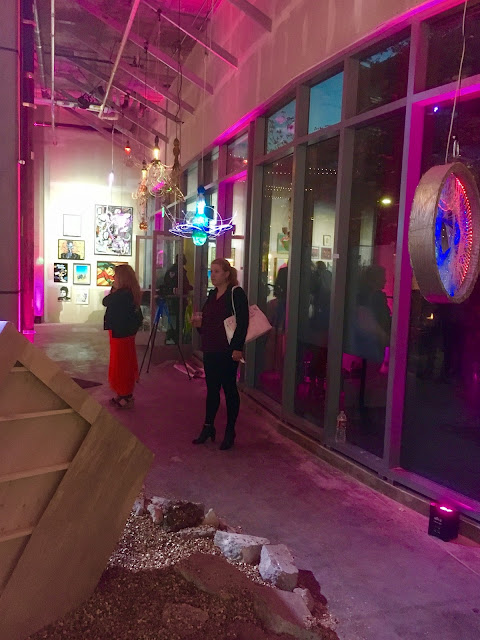 And so was a place at the bar at the new Hal's next door. There was a fancy VIP dinner for the event that I skipped, but the menu appeared to be the same good old Hal's fare. The Turkey burger is there, the Caesar is there ... the ART is there! Yes, the old familiar art from the original Abbot Kinney location is all there, the same staff is there, the jazz is there (last night played by Antonia Bennet - daughter of Tony) ... the only thing that isn't there is Venice. It's a little surreal to be honest, to have so much of the same feelings, but then look outside at a place that's kind of like The Grove. There's no chance of looking out the window and seeing a naked bike ride go by here, but then that's been happening less and less on Abbot Kinney too. This new Hal's is verrrry slick, with an open front with window tables, a big circular center bar, and even a state of the art screening room with the same fiber optics that the International Space Station has. Top shelf stuff. 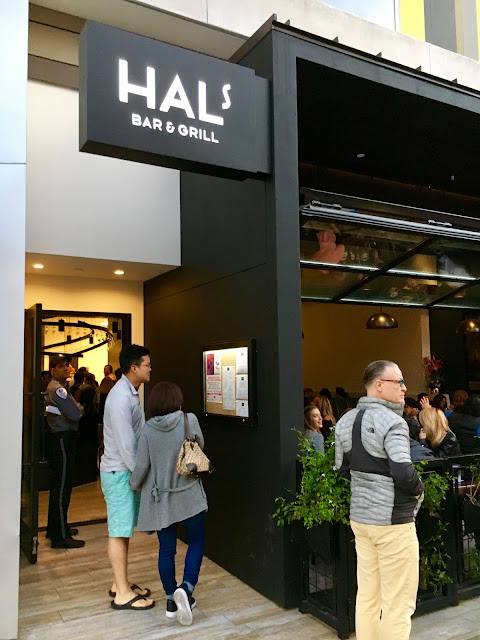 It was fun to see so much of Venice together again inside a Hal's, and Hal himself was holding court all evening. The only thing weird was calling a car to go home, versus walking across the street. I'm not sure how often we'll make the trek to Playa Vista (Pleasantville), but it's nice to know that it's there. Congratulations to Don, Linda, Hal, and all the staff on a beautiful new venue that takes a little bit of Venice to the folks on Jefferson. 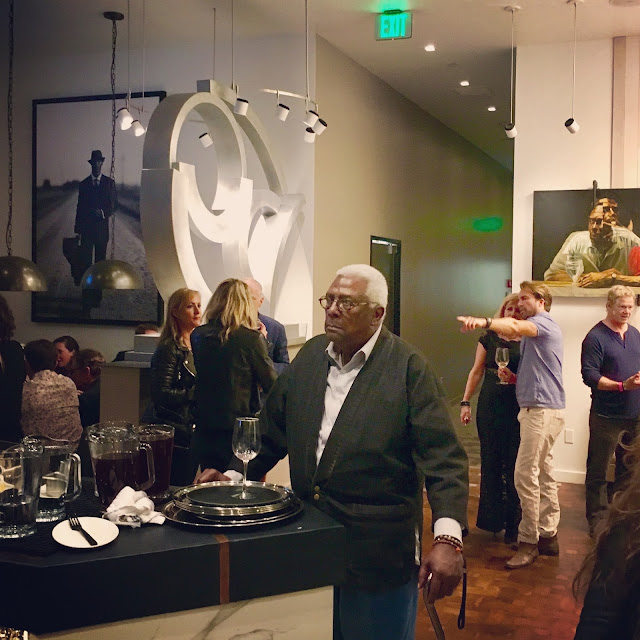 After all the art was seen, and the scene was made, it was time to head back to Venice for an after-party/420 jamboree at the Josa Tulum shop on the corner of Abbot Kinney an Venice Boulevard. There was more art, and more live music, and much more Venice. Lacey Kay Cowden had both her art and her music on display, as she played a live set there in the yard for the partiers. 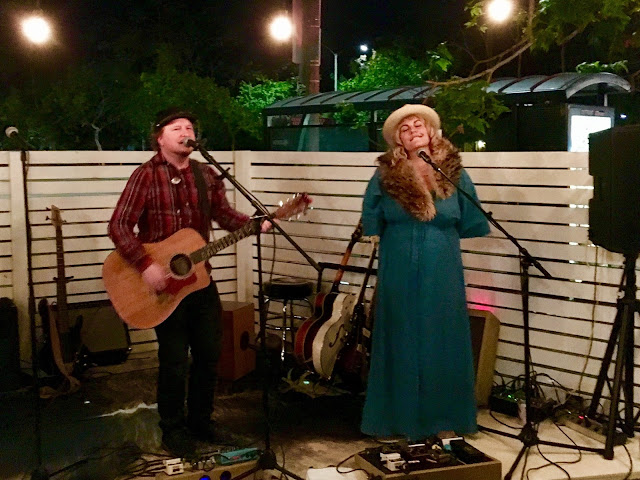 Death By Politics were both our hosts and our headliners, as they played a spirited set for the crowd gathering. You could hear the music from blocks away, and it felt exactly how a Venice 4/20 should feel. Awesome. 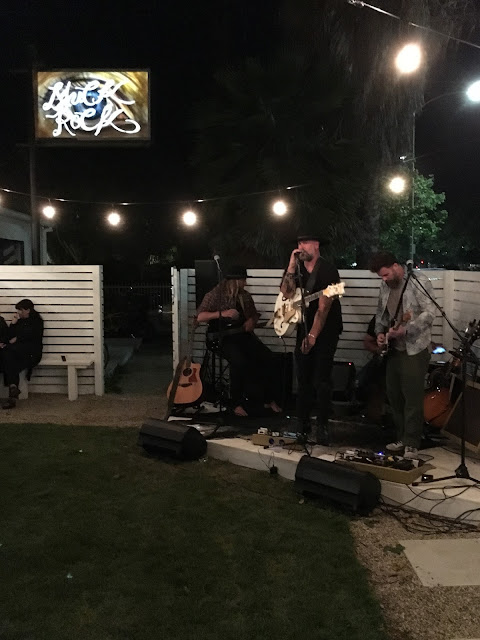 Local legends Paul Chesne and Tom Freund tore it up together toward the end of the night, and all was well. Real well. 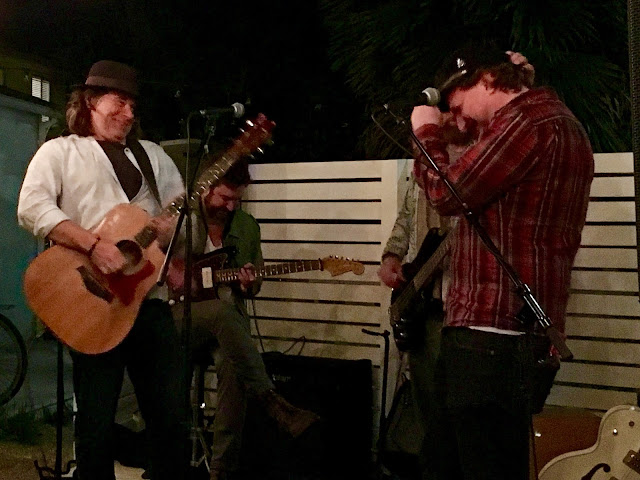 I walked the block home later, and could still hear the music from my bed for a while. That's a perfect way to fall asleep in Venice, California on April 20th ... on a night that was only about art, music, friends, and the Venice we all know and simply love. 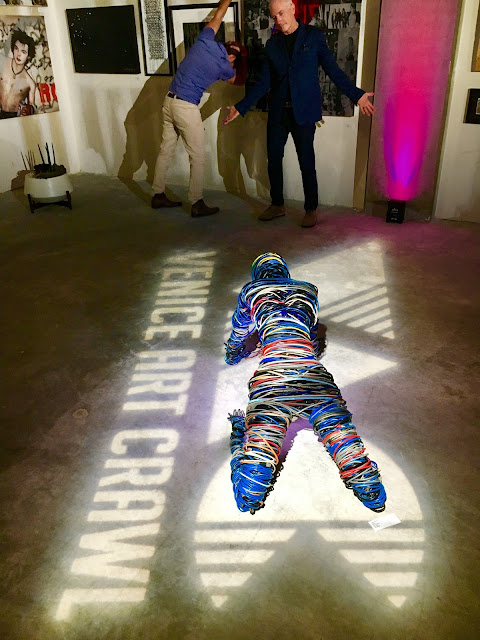 Kudos to all involved on a completely wonderful event that will guarantee more nights dedicated to art for us all. The show was so dense it's nearly impossible to mention everyone, but everyone was more than worth mentioning and I loved it all. Everyone mark your calendars for the May 18th Venice Art Crawl! It's THE Venice jam.