I've been to Preservation Hall in New Orleans, but not when their legendary namesake band was playing. That's been an empty spot in my soul ever since, so when I received the kind invitation from KCRW to attend their private live session with the Preservation Hall Jazz Band at Apogee Studios, I leapt at the chance.

We were greeted upon arrival at the door to Apogee with Mardi Gras beads, and directed to the bar where authentic Hurricanes were being served up to set the tone. It felt festive before the band even took the stage, and only went up from there. The listening room at Apogee Studios is tiny, so we revelers were packed in hip to hip, heel to toe, ready to be dazzled. KCRW DJ Garth Trinidad was our radio host for the evening, and Bob Clearmountain was the host of the event, as Apogee is his excellent, state of the art, perfect sound studio. 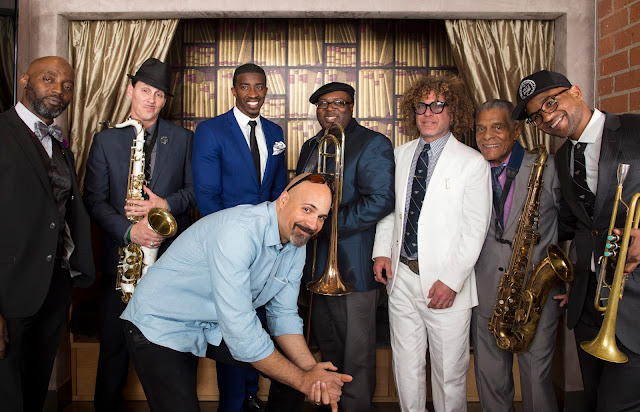 Trinidad introduced KCRW jazz aficionado, Bo Leibowitz, to tell the tale of how Preservation Hall came to be. Leibowitz took it all the way back to the 1800's with his encyclopedic knowledge of this "Cultural mélange" of a musical genre. It went a bit long for a SRO audience who were antsy (and drinking Hurricanes), but I'd be into circling back to hear more about it some day ... because Trinidad finally had to cut him off and introduce the band people were fiending to see.

The PHJB took the stage, led by Ben Jaffe, whose parents founded the Preservation Hall, and who serves as bandleader and its upright bass player. Their brand new album - of original songs! - comes out the 21st of April, and we got to hear So It Is front to back, live (and so will you when it airs soon on Morning Becomes Eclectic!). The album was produced by Dave Sitek from TV On The Radio, so you know it's gonna be good. They kicked it off with the title track "So It Is", and the party was officially started then, but really lit up when they launched into the second number, "Santiago". It was pure energy, and featured blistering solos from every player, heavily influenced by their time recently spent in Cuba. These are virtuoso musicians we're talking about, and it was all basically a master class on what you can sound like if you practice your instrument every day of your life like you were taught. WOW. 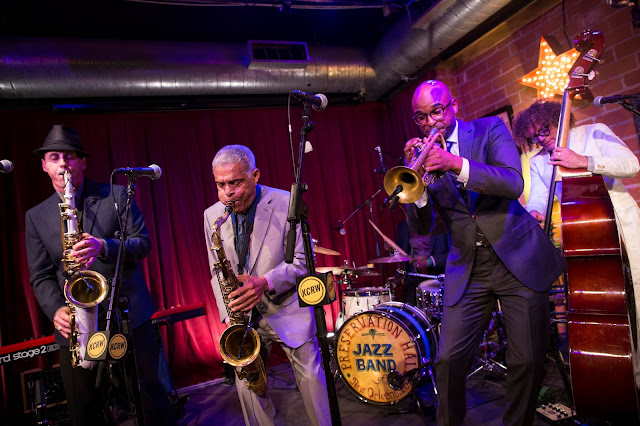 The whole proceeding was held down by the excellent drumming from Walter Harris, who Jaffe called "the gas in their engine". Indeed. "Innocence" and "Malaga" were both outstanding, and really showed off what a hambone their trombone player, Ronell Johnson, is. His use of his mute and fully infectious enthusiasm was not only super impressive, but impossible not to smile at. This cat is INTO it, every note. 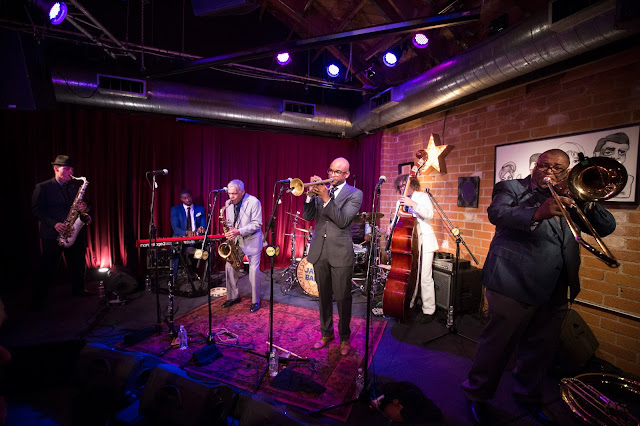 It was cool to see the conversation between the two saxophonists, Charlie Gabriel and Clint Maedgen. Gabriel is the elder, and you could see him flexing his experience to the younger whippersnapper Maedgen, who more than ably kept up, he answered with his own flair. Both of them made my brother wish he had kept up with his own sax lessons. Yep. 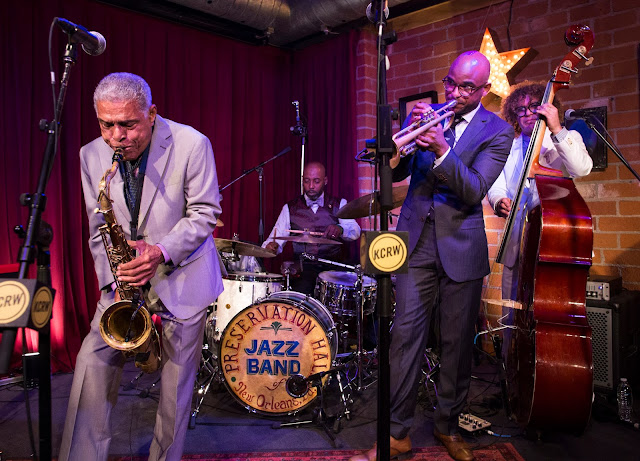 "One Hundred Fires" WAS that hot, and pianist Kyle Roussel made sure of that. I was watching the blur of his fingers and thinking simply "How?" - while wishing I'd kept up with my own piano lessons. Yep. 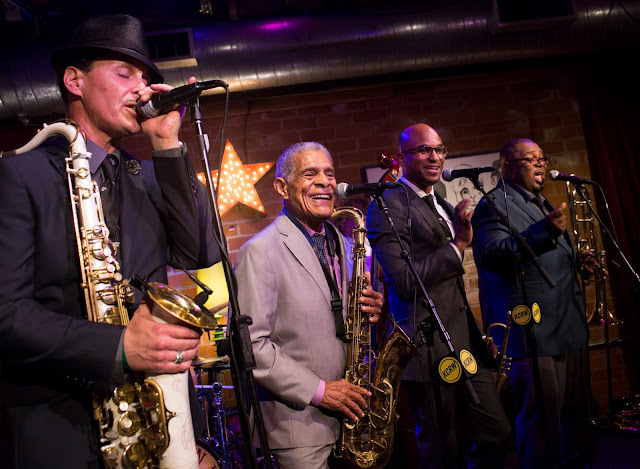 If you want to know what an awesome trumpeter sounds like, pay attention when Branden Lewis plays - though his playing demands it, so you won't be able to help it. Geez Louise! He's so good. All the guys not seated lined up at mics for their song "Mad" and sang "I ain't mad at you, no matter what you do" while we answered with the "Lalalala" chorus. This was the only song with vocals, and everyone was feeling it, and belting it out. It whipped up everyone into a frenzy, so much so that then when the guys left the stage, we could not accept that it was over. 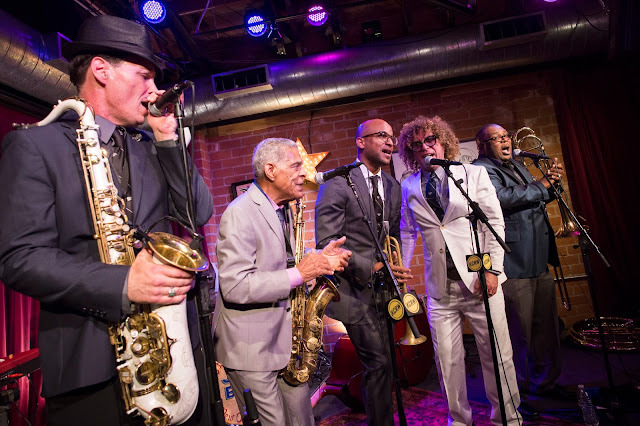 Trinidad brought them out for an encore after all the screaming and whistling demanded it (you'll probably hear me whistle on the broadcast. Sorry.), and Jaffe thanked KCRW, saying they have a cool radio station that they also adore in NOLA as well (WWOZ) so they know what it means. Seriously, thank GOODNESS for KCRW these days! As Jaffe was saying his words of thanks, I was thinking how even as messed up as the world is right now, I hadn't thought about any of it while I was in that room listening to this remarkable band. I was purely in the moment, loving it, and so was everyone else, it appeared. Just as I was thinking this, Jaffe said, "When the world's got you down, think of the Preservation Hall Jazz Band. We love you all." And we love them. 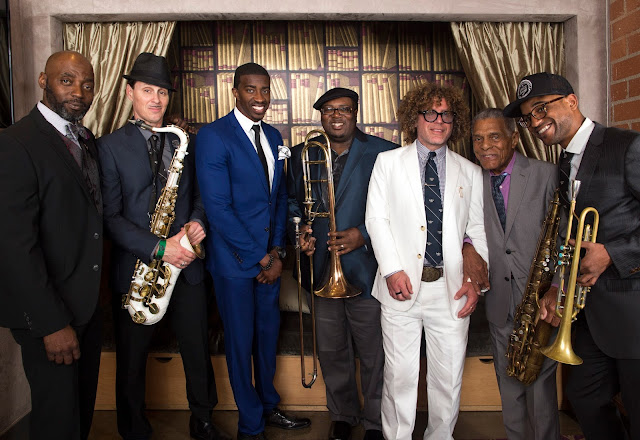 They blazed through an encore of songs from their Jim James produced album, That's It! and we all danced like there was no tomorrow. Because you never know ... and we want to go out dancing.

Thank you to the wonderful Preservation Hall Jazz Band and KCRW for a night of musical escape that no one in there will soon - or ever - forget. Laissez les bon temps rouler - all the way to L.A.!