Though the real Mardi Gras isn't until next Tuesday, Venice celebrated it a little early this past Saturday ... mainly because our organizers are attending the real one in New Orleans next week! There has been a lot of marching around town lately, but none of them have featured as many smiles and pure fun as this march down the Venice Boardwalk. 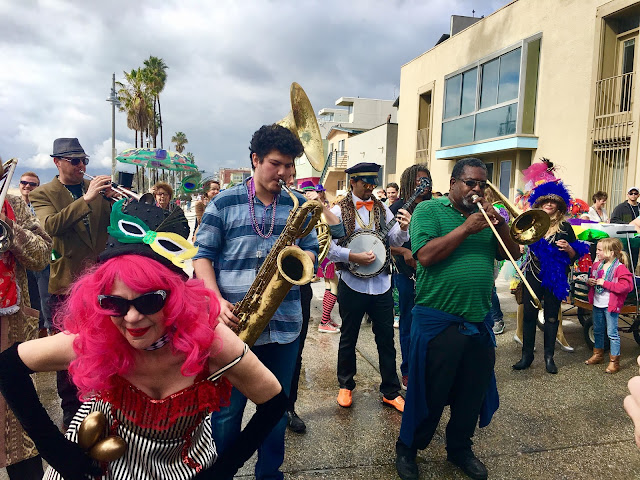 It rained all day the day before, and parade organizers insisted that the good times would roll, rain or shine. It was still raining on Saturday morning, but as it got closer to noon and parade meet-up time, the drops stopped and became merely grey skies. I put on my purple pants (the Windward Krewe color!) and "Here Comes The Sun" shirt ... and sure enough, here the sun came! 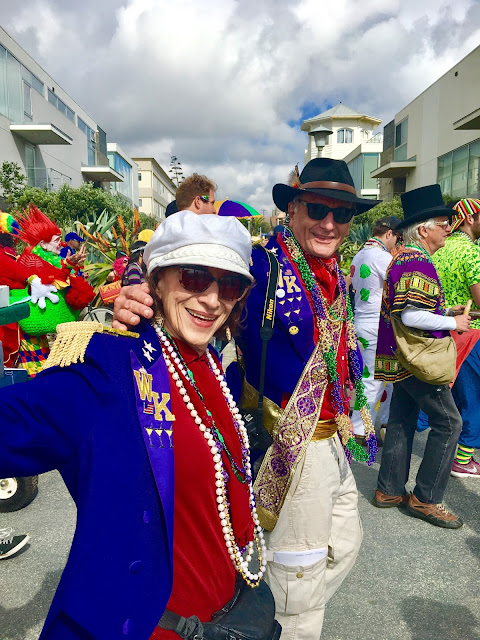 I had a couple other things going on so got down to the Boardwalk a little late, relieved that we're almost always on Venice Standard Time - meaning things don't usually start very on the dot. I headed down the Boardwalk toward Rose Avenue, not seeing or hearing any sign off the festivities. As I kept on walking, I thought I saw a glimmer of sparkle a ways down, and then I heard the unmistakable distant sound of a sousaphone's oom pah. It was on! Here comes the parade!!


I was swallowed up by the paraders, and we all danced and sang on down the Boardwalk, to the delight of tourists that had no idea it was coming. Faces lit up and cameras came out, as beads were tossed and passersby were invited to join along in our promenade down the beach. 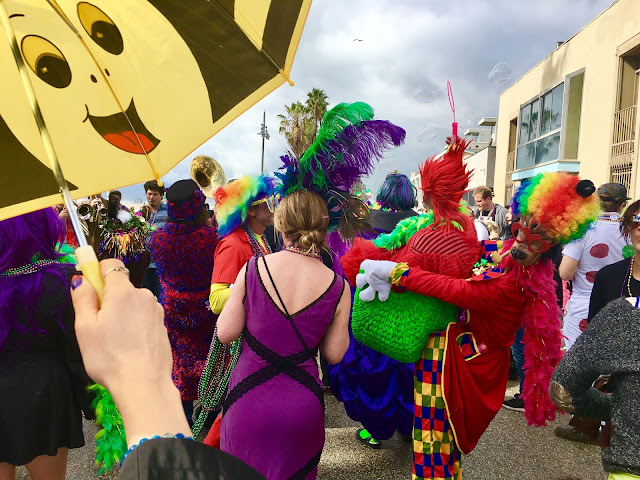 The windows and balconies facing Ocean Front Walk had people hanging off of them, straining to catch beads - though it was only males that I saw flashing their boobs. One guy had those confetti blasters (that I should have stocked up on in Chinatown at the Golden Dragon Parade!) and was showering it all down on us as we passed, making everyone hoot and holler in appreciation. 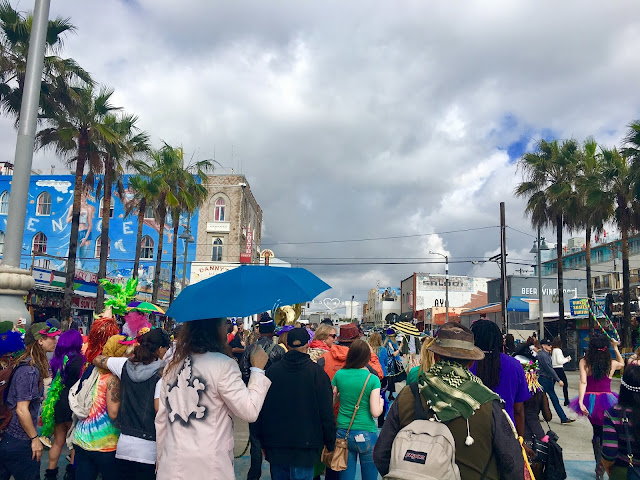 The street performers along the Boardwalk would join in as the parade went by, and I particularly loved this couple that accompanied us on guitar and washboard. Adorable. 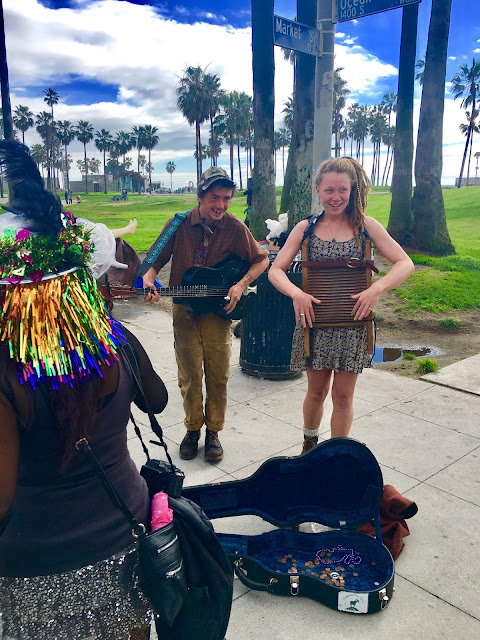 Participants really had the Mardi Gras spirit for this year's theme of "Circ Du L.A." (frankly, I think we all just needed to blow off some steam), and the costumes were great. The handsome King Ravi (of the late Danny's Deli fame) and his Queen Toni presided over the event, giving it all a very regal flair. 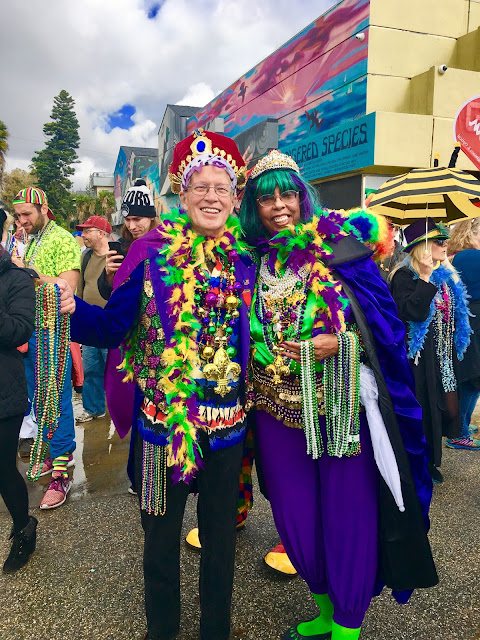 I think Best Costume has to go to the Clown in his own basket with a sly fake dog on his back. There was a lot of effort and color involved, and that dog looked like he was checking everyone out. Classic. 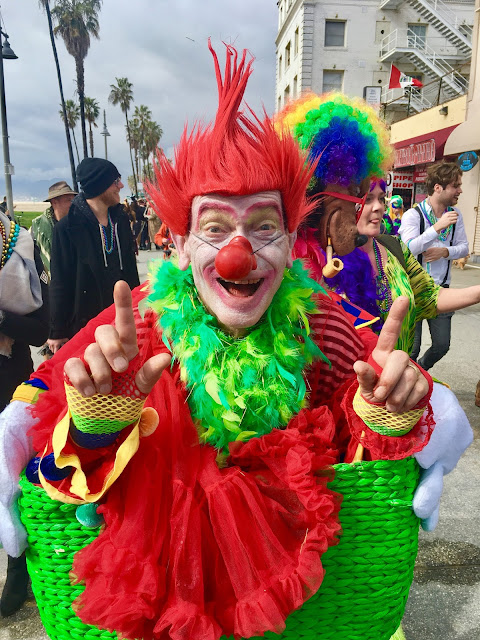 Also impressive was this costume actually made out of Mardi Gras beads, that shook like a flapper girl when she danced down the Boardwalk... 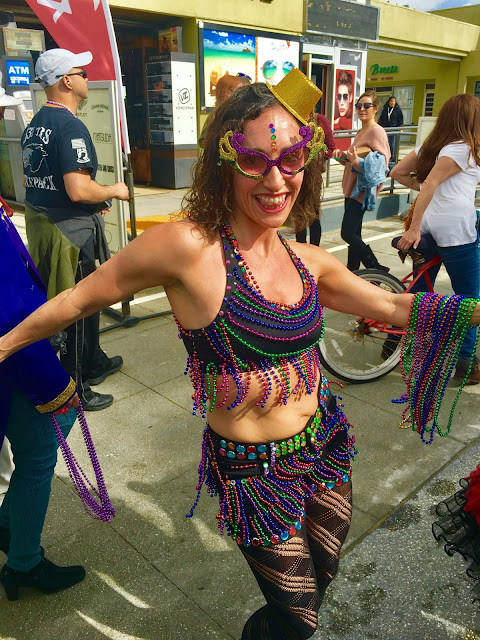 Miss Jessica Long led the parade, as its founder and most enthusiastic Mardi Gras reveler. She has a home in New Orleans, and is on her way there for the real thing, with an excellent head start from what she has created here in Venice. It was SO. FUN. Thank you, Miss Jessica! 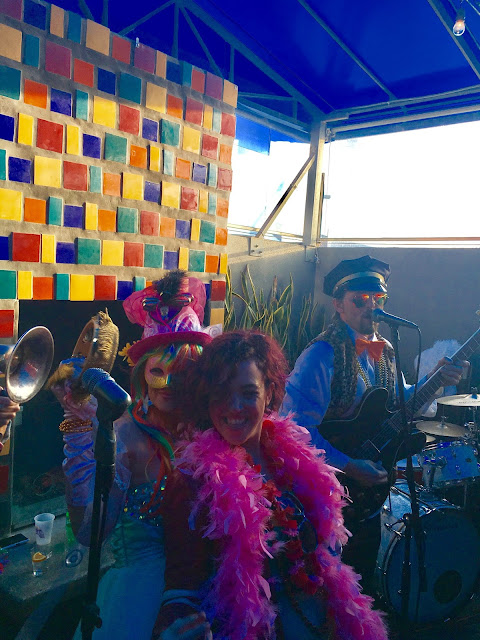 Once the parade ended up at Windward, there was a full-on dance party there, with everyone joining in. The hula hoopers hooped and made a circle that became a dance off centerpiece, with the brass band playing all the while. The sun was now out and the party was now ON. 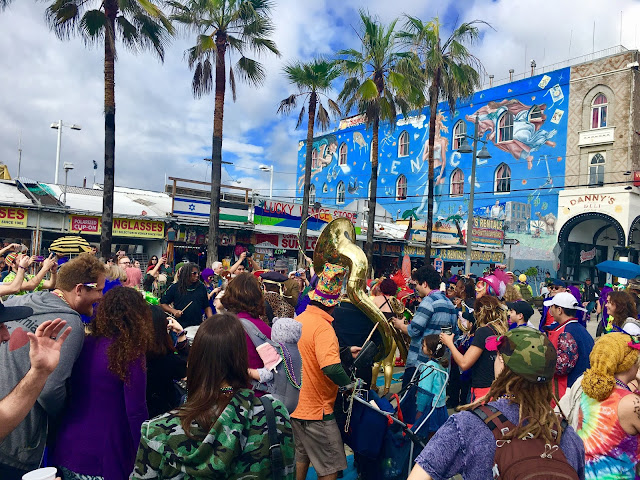 As Danny's Deli has closed, the after-party was held at Larry's Venice there on Speedway. The Gumbo Brothers (who I learned began as a result of this very parade) played their Dixieland tunes for everyone to dance along to, there were New Orleans themed drinks like Sazeracs, and the Mardi Gras treat of King Cake was served - though I never heard who got the baby. 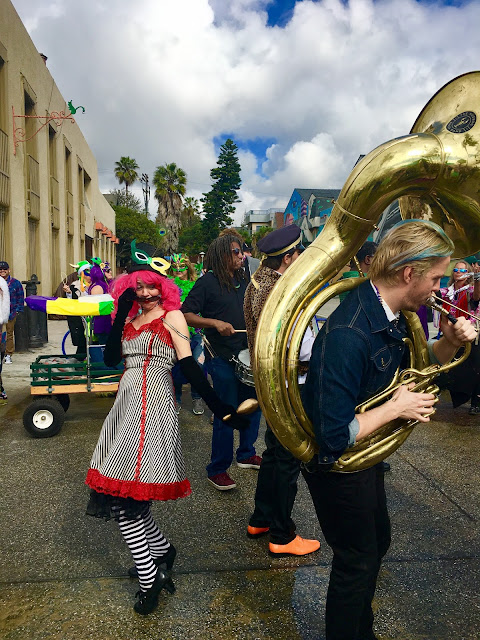 Feather masks were handed out to those that didn't have their own, so soon everyone was both looking and acting the part of official Mardi Gras Reveler. The Dayger raged on well past sunset, and I can report that the bon temps definitely roulered. 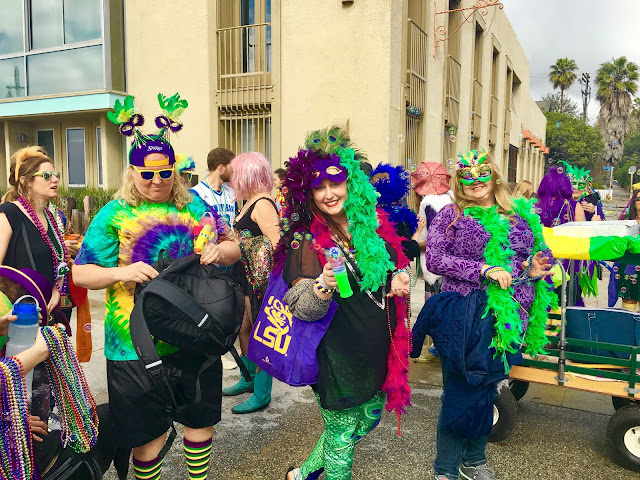 This day was so fun, and so needed. Times have been so heavy and the chance to come together with your community in the name of simple fun should always be taken. I had a friend say the next day, "I hear about these things and I never go." I think that's a real shame, because there is something very great and healing about being all united for just a good time. THAT is what Venice has always been about, that and the art ... We are the music makers and we are the dreamers of dreams, right? This kind of day solidifies that joy in our hearts, and reminds us all of what long ago made Venice the place to be ... not money, not greed, not corporate b.s., but FUN.