The 118th Golden Dragon Parade In Chinatown - Year Of The Fire Rooster!

I've now lived almost equal parts of my life in Minnesota and California, and in all these Western years I'm embarrassed to say that I'd never taken it down to Chinatown to see the Golden Dragon Parade celebrating the Chinese New Year. Woeful Angeleno, right? 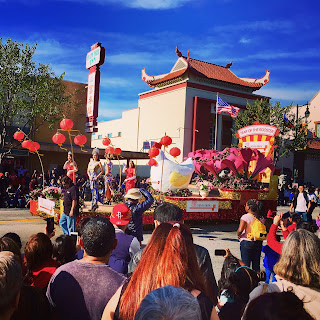 Well, this year was the 118th parade, and they were celebrating the Year of the Fire Rooster on the weekend that my dear Mom would be visiting, so that would be a cool thing to do for sure for us both. Then she got sick and got re-sick and the winter rains came. But then Saturday dawned all bright and blue skied, and we were both hacking a little less, so it was on. 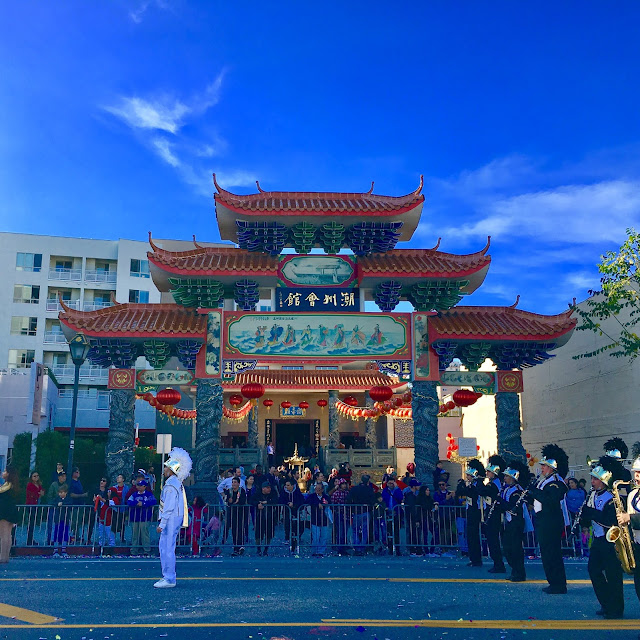 We took the train right smack dab into the heart of Chinatown (3 trains, but very easy), and spied the dragons parading down the street directly ahead of the station. Confetti bomb sticks were going off every second, drums were banging like crazy, and suddenly we were right in the thick of a Chinese extravaganza of fun! It was exciting and surreal and trippy to behold - especially on the cold meds. 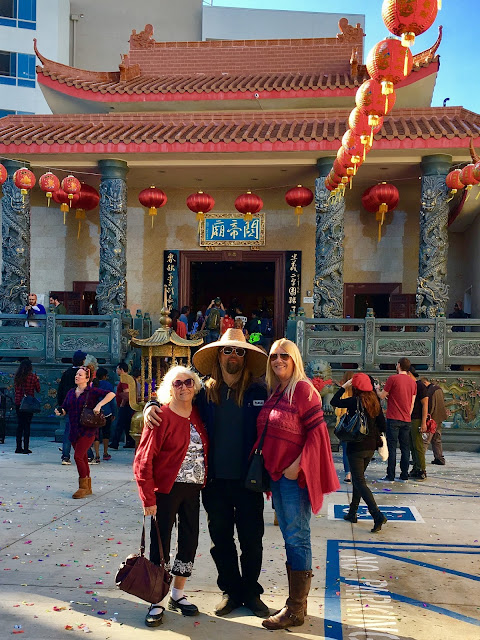 It was all impressively easy to navigate, and people of all nations were enjoying the spectacle in a polite and cooperative fashion, as seen recently at the Women's March. Like minds out supporting diversity and the one love-ness of our worlds. Together. With respect for our individual cultures from which we all learn. We were happy to run into a bunch of folks from that day's downtown march for Health Care, and you better believe my silent thoughts ran in that direction as I stood in front of the Temple's altar and breathed in the thick incense of prayer all around us. 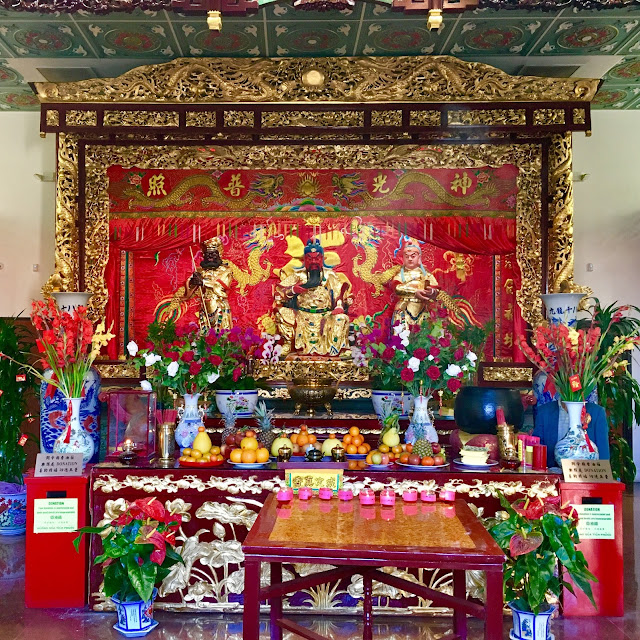 Deep thought could only last an instant in this situation, however, as the drums banged on along the parade. I didn't see THE Golden Dragon, but I saw many, including a lovely and favorite fuchsia one. 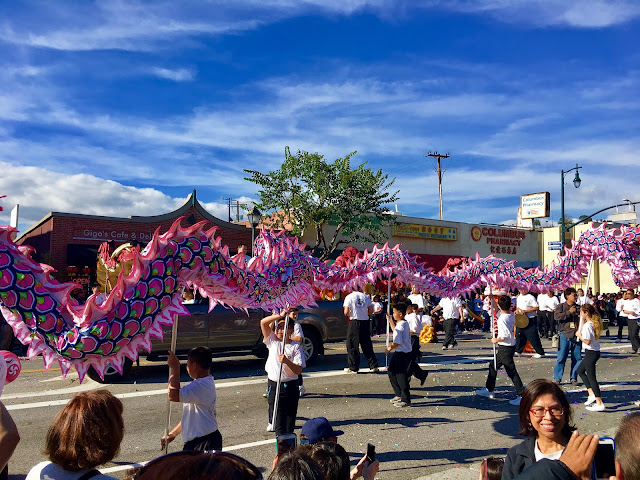 The tail end of the parade was actually a posse of Mexican cowboys, who were met with thunderous applause as they passed by on their cool horses, waving both the Mexican and the United States' flags. It was a cool moment, as Chinese, Mexican, Caucasian, Black, Muslim, and absolutely everyone lined up there on Broadway shared together a sense of the real unity WE THE PEOPLE all can have and must protect. I've felt it every time I'm in the mix like this, and this day was no different. In fact, it felt more reverent, like we all knew it was special and that's who we really are. 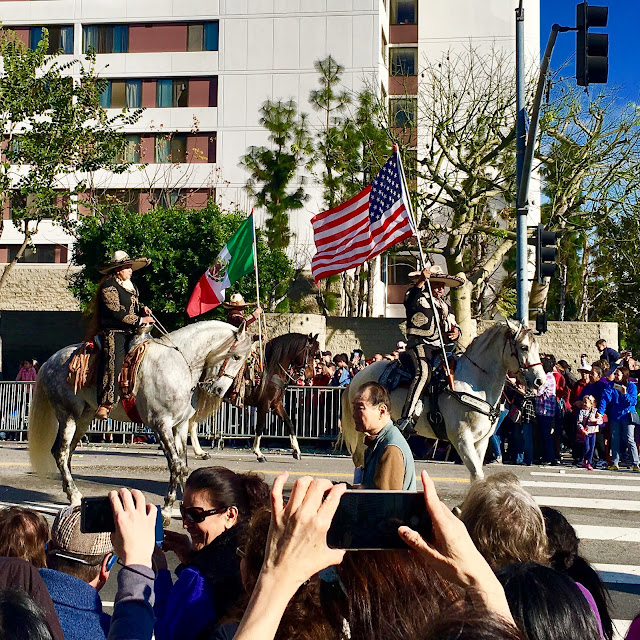 The jubilance from that moment carried us all on over to the Central Plaza, where lovely costumed dance performances and cooking demonstrations (by seemingly drunk hosts) were going on. Food trucks lined the streets, and the lines to get in the myriad Chinese restaurants were long and looked like fun. 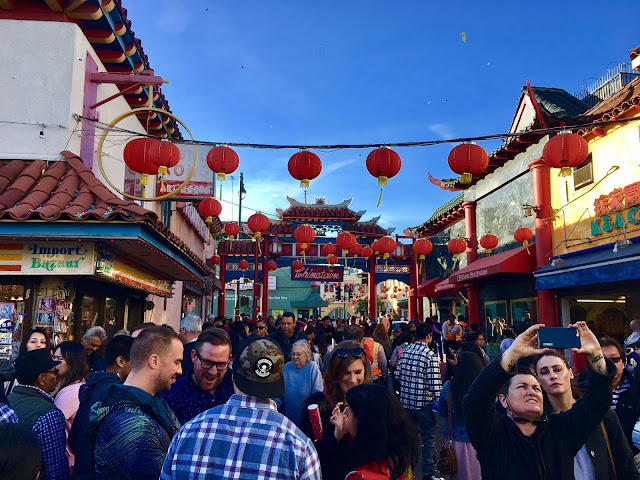 We took a little bench breather, and were nearly buried alive in all the confetti going off around us. Kids were delightedly making piles of it to jump in, and it sounded like gun shots going off all around. A few old-timers were seen wincing, as the entire place was one big marching band drum line firecracker zone of mayhem, but that's all what makes it feel exciting. Smiles were the collective resting face. 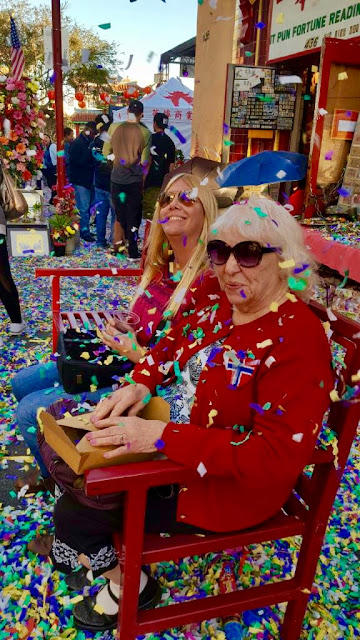 Perhaps except for this very serious mah jongg crew, making their moves on the sunlit table, like they no doubt have for decades. I loved them. 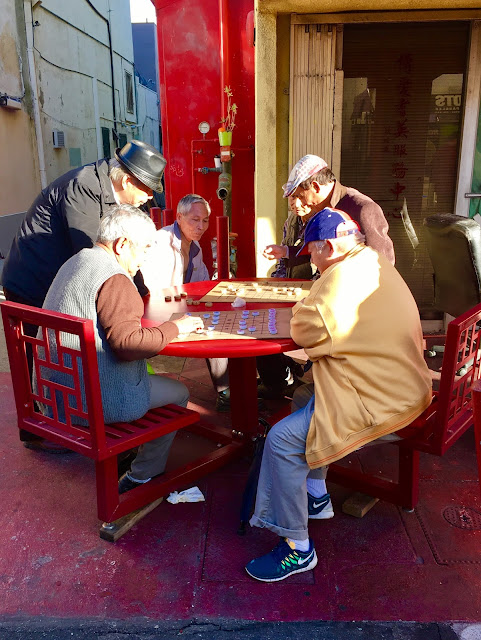 Paul found his perfect photography hat for six bucks on the street, and noted that Chinatown's prices were better than they actually were in Southeast Asia where he'd just recently spent two months. Interesting. Tables were turned, and several Chinese people were now stopping Paul to take his photo in his big beach bum hat. Again, One Love was the order of the day. 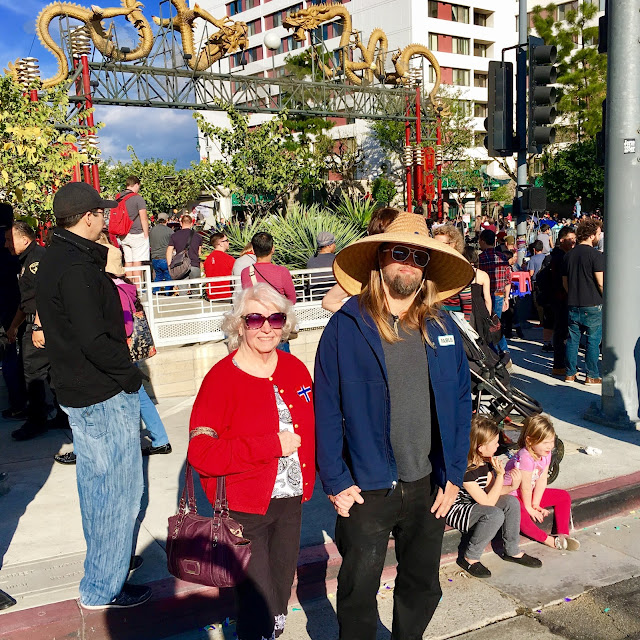 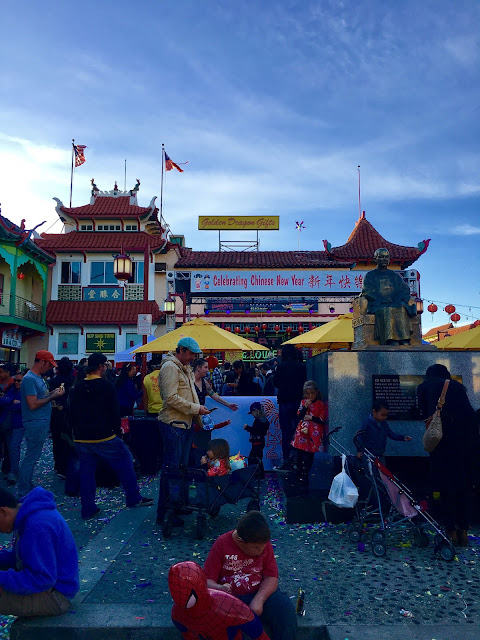 The day turned a bit brisk when the buildings put it all into shadows, and we left the banging drums of Chinatown for the mariachi tunes of Olvera Street for a little margarita warm-up. People were streaming by wearing and holding their souvenirs of the day. Here was a kid swinging toy nunchucks, there was a little girl holding a small box with water and a new pet turtle inside. Confetti was in everyone's hair even back on the train, and you'd kind of smile at the person, knowing that we'd all kicked off the Year of the Fire Rooster in fine fashion, in excellent celebration, and most importantly, in solidarity and respect for all cultures and their People. 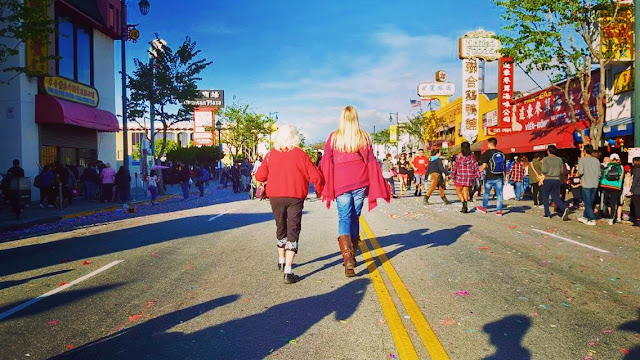 Thank you for sharing, Chinatown!