The Venice Sign wasn't the only thing that got lit for the holidays last Friday. It seemed as if the entire town was on a party mission to go absolutely nuts ... so we did.

The festivities kicked off with Carolers caroling as Venice residents and visitors streamed in to the center of town to Windward Avenue, which had been blocked off for the festivities. Booths lined both sides of the streets, with local organizations and businesses making their presence known. You could buy hot chocolate and treats for good causes, and get your gift shopping started with crafty things and art. 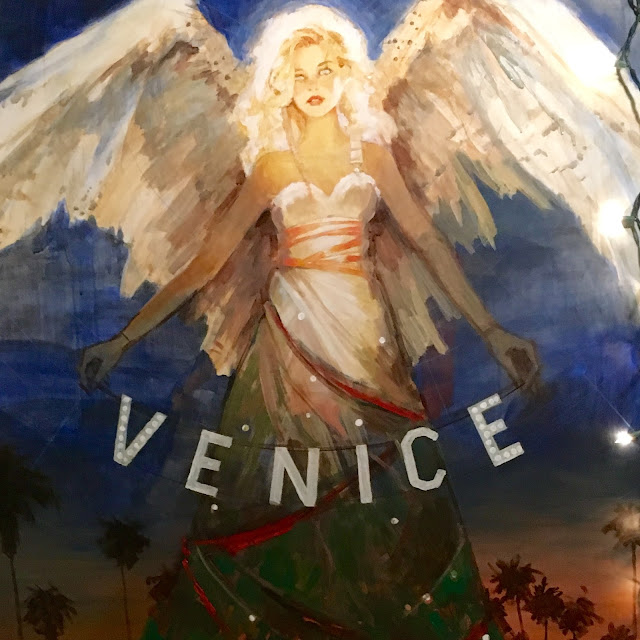 Our local artists were down there live painting and sharing their work, and putting faces to names with people that admired their work. Francisco Letelier was there with his cool Venice clown mural, further illustrating how important that part of our Venice is. 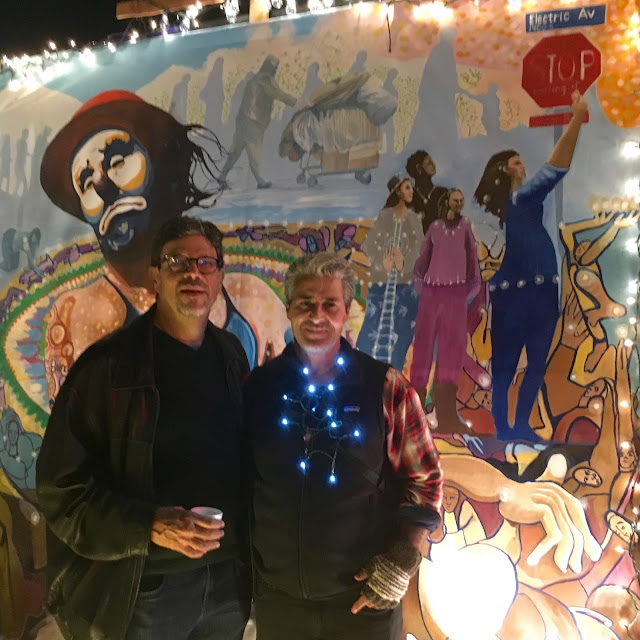 A giant panda was installed in Windward Circle for the holidays, so that was cool, and provided many a photo op for the evening. 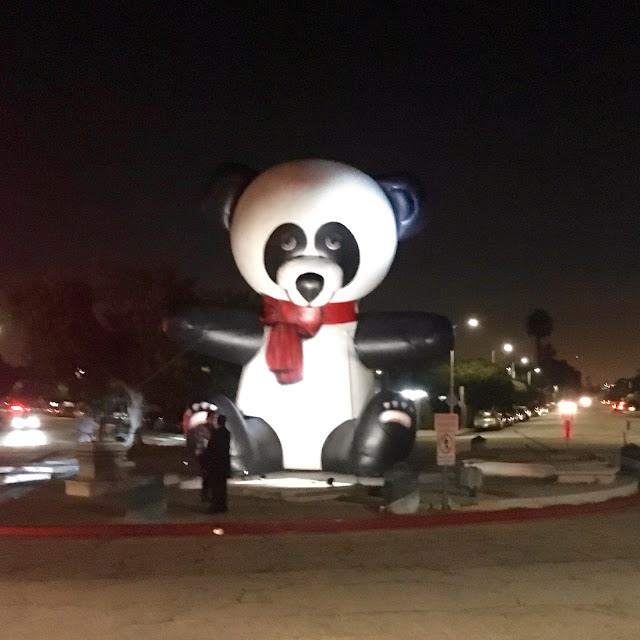 Since we don't have snow, snowflakes were projected on the buildings and a big peace sign created a nice centerpiece to the crowd, that by now was getting massive.

Drinks were flowing in back of the stage, and friends and neighbors shouted greetings everywhere you went. I ran into one friend who said, "We only see each other on the happy days!" which I quite like, actually. Living here, that's a lot of the days. 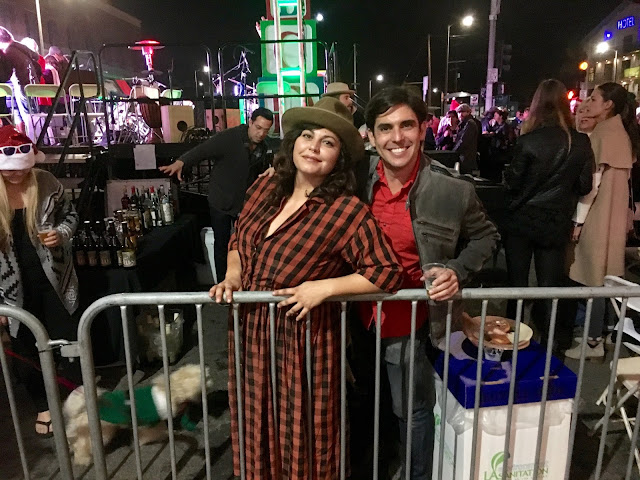 While First Fridays was happening over on Abbot Kinney, all the locals came here. One Venice treasure after another was spotted in the crowd, from Harry Perry to Vivian the Name On Rice lady. I hadn't seen some locals since last year's sign lighting, so you know this is the event that brings ALL of Venice together. I love it so much. Never does Venice feel more like a small town than at this beautiful and heart-warming event. 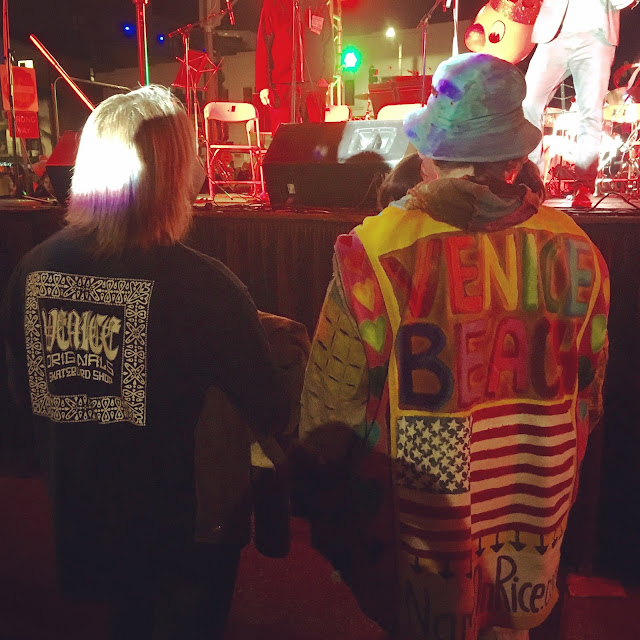 My dear friend Lacey Kay Cowden warmed up the crowd with her gorgeous tunes, gaining a slew of new fans in the process. 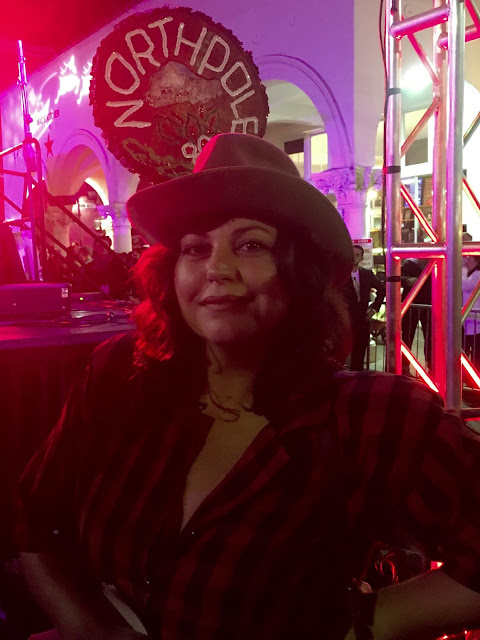 Cowden's version of "Santa Baby" got everyone in the holiday mood, and our whole gang was beaming with pride as our friend Lacey charmed the socks off of everyone. Check her Go Great Guns ep out on Itunes and keep your ears open for her next gigs, because you'll love it. Thanks! 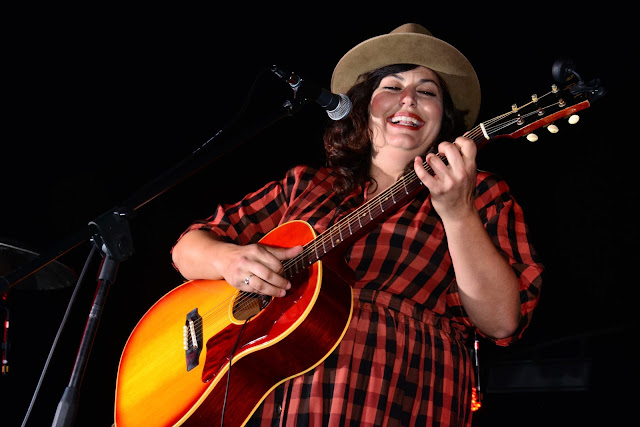 Our wonderful Venice Symphony Orchestra entertained the crowd with a medley of holiday tunes, and even some Star Wars jams. 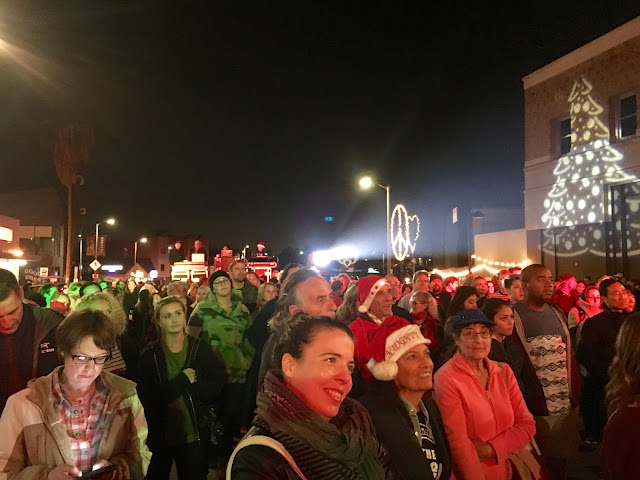 One member of the orchestra slayed with his loungey song, and another member got up and belted out some James Brown, and by that point, we ALL felt good. 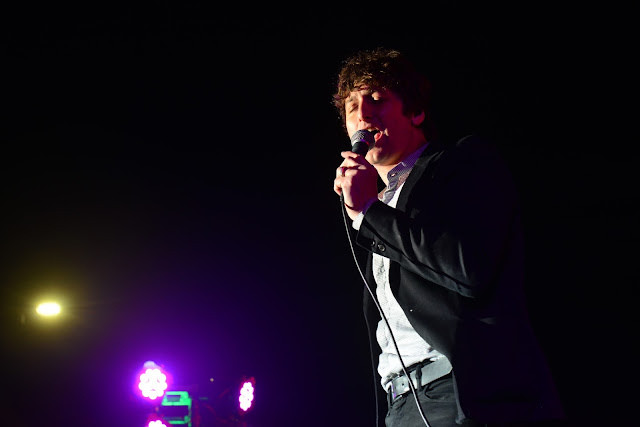 It looked like the entire street was jumping up and down together when the VSO played "Hava Nagila" to kick off Hanukkah weekend, and it was at that point that I looked around at all the smiling faces in the crowd and felt so happy that at least here, it seems like we're all in it together. Everyone celebrating not just each others' holidays, but EACH OTHER. And how much we all love Venice. 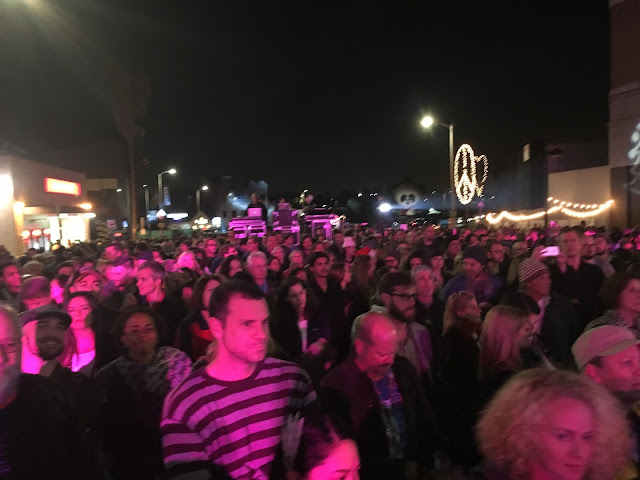 A very Venice moment was when "Gonzo Rocks and the Alien Halo Experience took the stage and played a timpani sounding hibachi grill looking thing thing that was just weird enough to be perfect for Venice. I loved it, because Venice needs to keep it interesting. Keep it authentic. Keep it arty. Keep it weird. 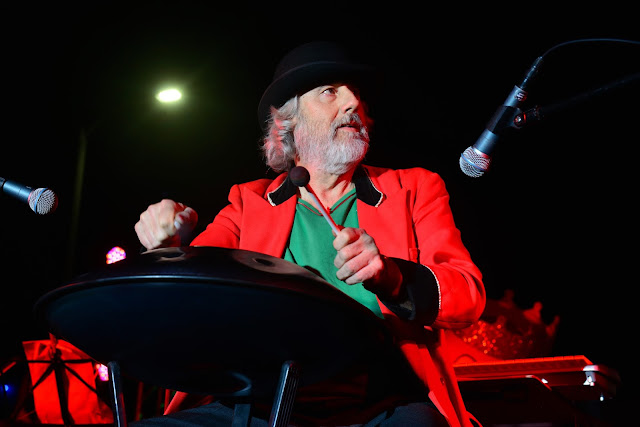 It was fitting then that the VSO launched into "My Favorite Things" because looking around, these WERE my favorite things - and people - all in one place, enjoying it all together. 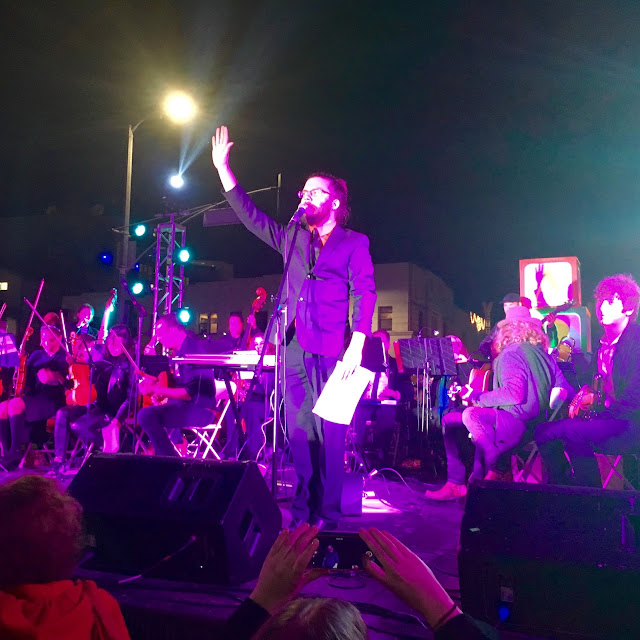 A bombastic "Carol Of The Bells" was the orchestral finale (and was awesome), and then everyone had to stand still for the politician chatter, sponsor (The Whaler - thank you!) thank yous, and some schmoozing up to the computer companies that no one who lives here and cares about really appreciates. I know this because this is when the crowd booed. Take note, Corporations. THIS kind of night is what Venice is about. Not you. And it never will be. 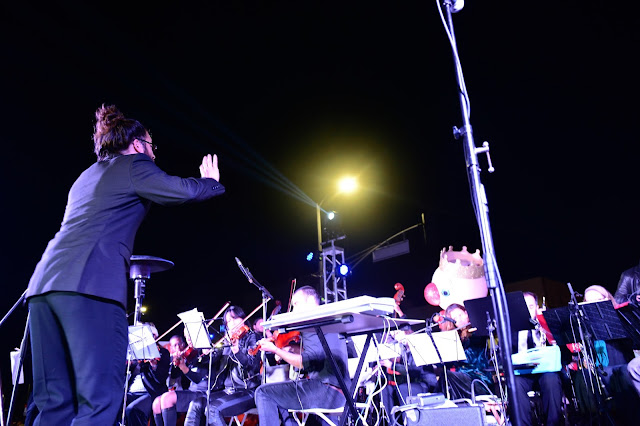 Anyway, so the last few years have featured celebrities with a link to Venice to flip the switch on the Venice sign, but this year the honor went to an adorable, smiley bunch of Venice elementary school kids who won an art contest. 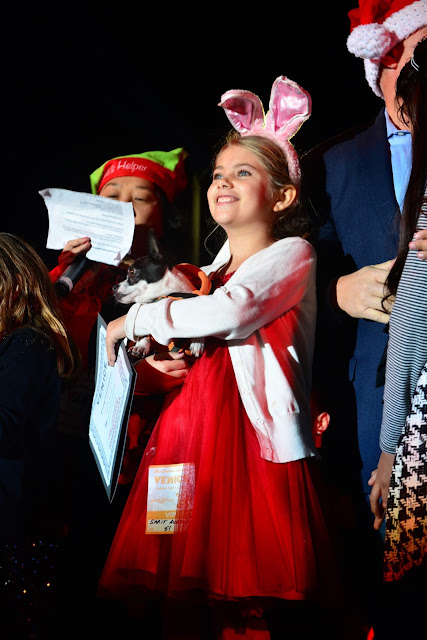 Sunny Bak (and her dog Pinky!) introduced the kids, who didn't stop smiling or holding hands the whole time. They were precious, and Venice's future looks to be in good hands with them. 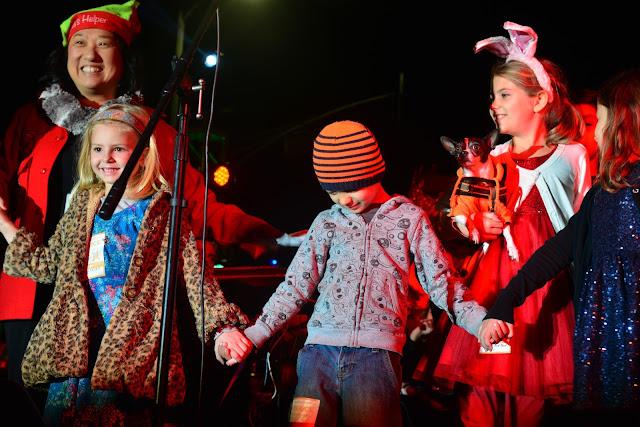 It was finally time to light the sign, and after the crowd counted down, the beloved Venice sign switched on with its red and green holiday outfit sparkling. Everyone cheered wildly, and high tailed it over to get their photos of the sign. 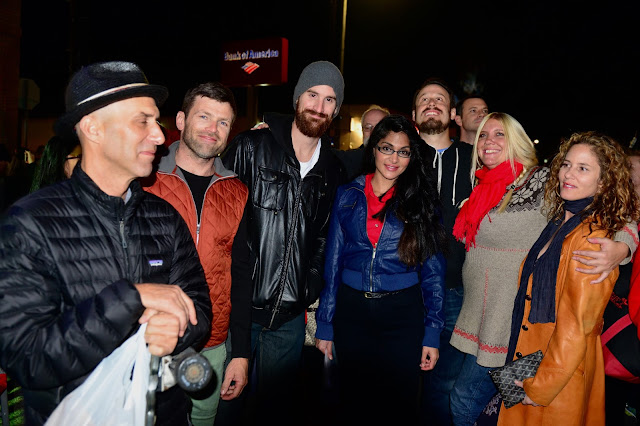 I headed in that direction too, but was stopped by a huge circle of people gathered around something behind me. I assumed it was break dancers or something, like when circles form around the entertainers on the Boardwalk. I squeezed through the crowd to see what awesome moves were being thrown down, and was instead disgusted to see a woman being Tazed by the police. Tazed at the Christmas gathering. Hmm. I was told that she had challenged a cop to a fight, and I guess the cop thought they were tougher than her with their Tazer. I guess we can be glad it was just that vs. a gun these days, but still. Overkill. In the middle of a giant holiday crowd. But let's not let that put a damper on our spirits or memories of a perfectly fantastic night for Venice.

Crowds of people lined the streets and took photos of the sign, where I found one of the Sign lighting founders, Danny Samakow, happily gazing up at the lights, and at all the happy people milling about. It was nothing less than great. 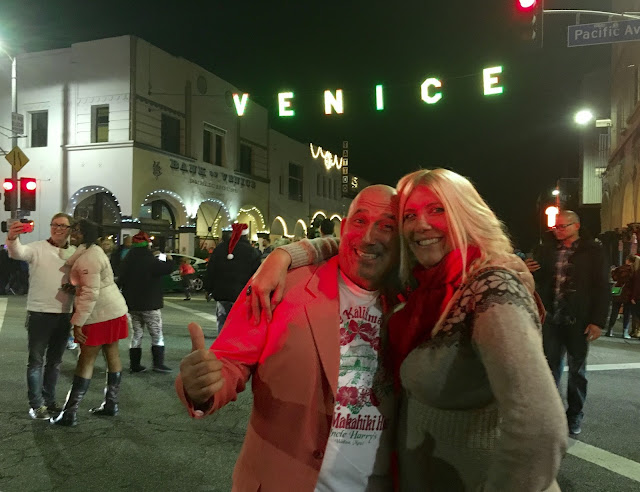 The Tree Man posed for photos in the middle of the street, where flasks and joints were passed around openly ("It's fine, no one cares, It's Venice", was one assurance I heard and agreed with when I passed by), and the party was now officially ON, along with the sign. 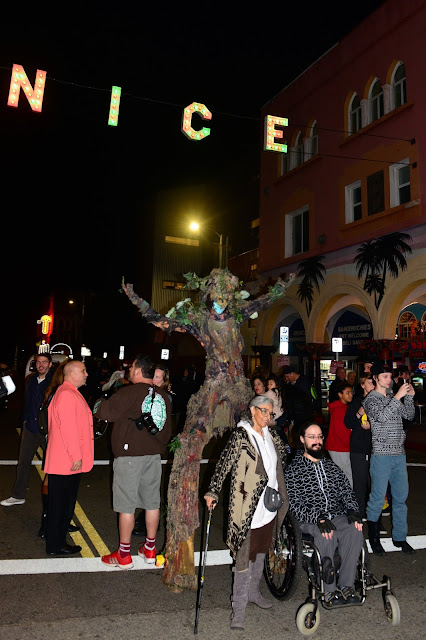 The Townhouse was also celebrating it's 100 year anniversary and the repeal of Prohibition, so that's where we all headed. It was party mayhem - so fun - and it all went on deep into the night/morning. 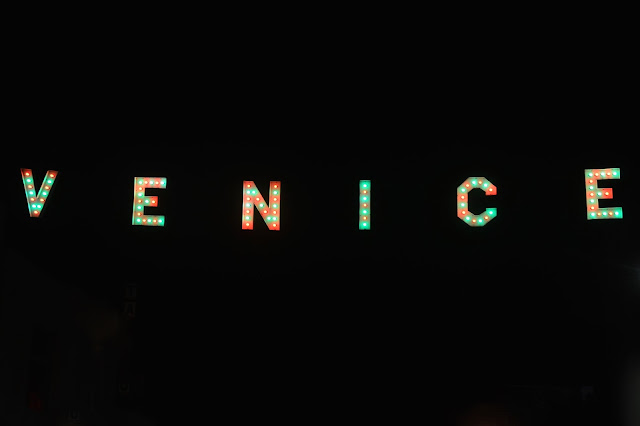 Happiest Holidays and Merriest Christmas to all of Venice and thank you SO much to all of the people who come together to put this superfun time on for everyone  - including, and most of all, the residents of Venice who attend each year, love our town, and support and fight for our beautiful beach city all year long. It might have been the holiday spirit, but I could almost physically feel the love for Venice in the air that night. I hope you felt it too, and carry it with you everywhere you go.

Holiday Cheers to you all!


*Photos by Paul Gronner Photography and Me.