Yesterday was one of the most charming days that happens in Venice, with both the Abbot Kinney Holiday Stroll and the Venice Canals Holiday Boat Parade falling on the same day.The day could not have been more gorgeous for Sunday outside, and the snow hill piled up in The Brig parking lot was in the process of melting all day. 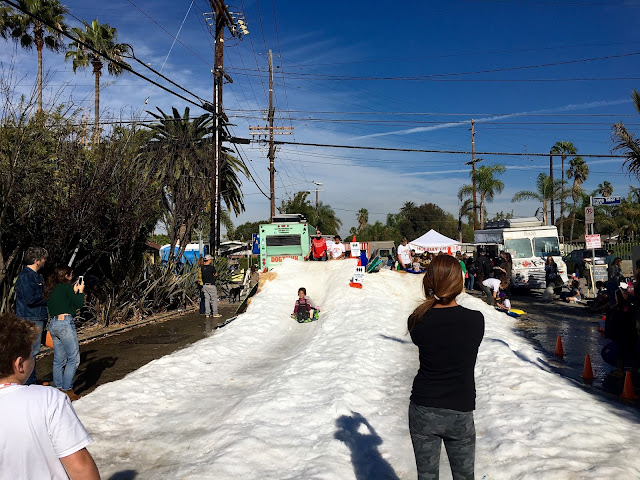 Local children lined up to get their annual chance to experience snow in town, with a long sledding queue stretching around the parking lot as kids ran back to get in line again the minute they hit the hay bale finish line. 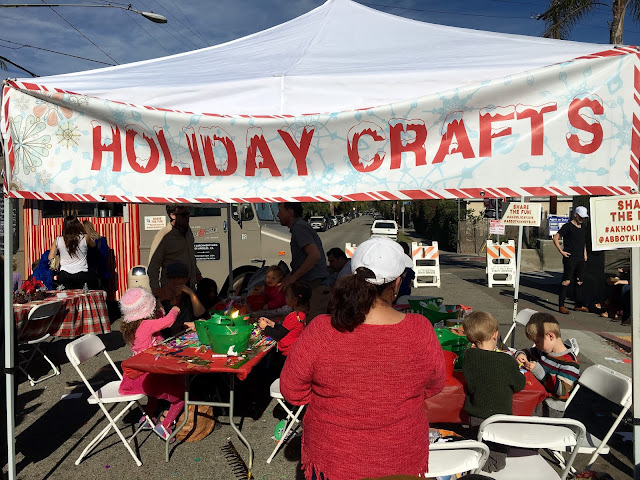 Sledding was not the only attraction by far, as kids could get their faces painted all fun, sit and make holiday crafts, and most importantly, sit on Santa's lap to relay their Christmas wishes to the jolly old fellow (and this was a really good, twinkly eyes, real beard Santa!). 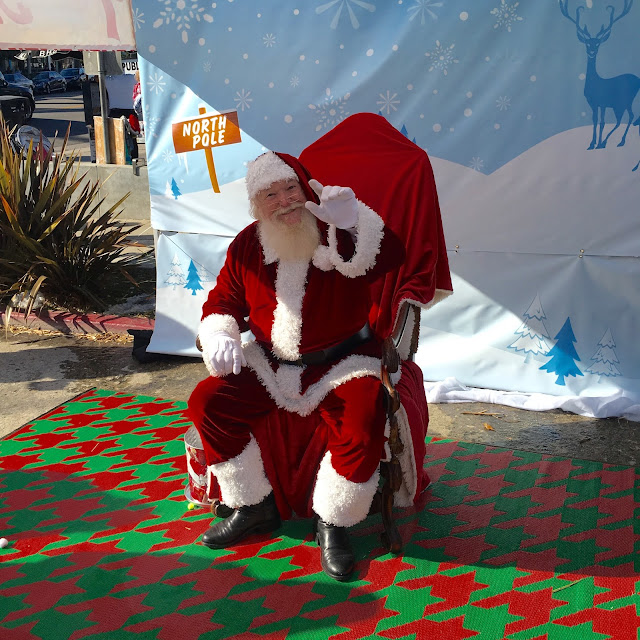 With all the squeals of delight and happy, laughing faces, it's hard to believe that a Scroogey neighbor complained almost enough to deny our local kids the fun. 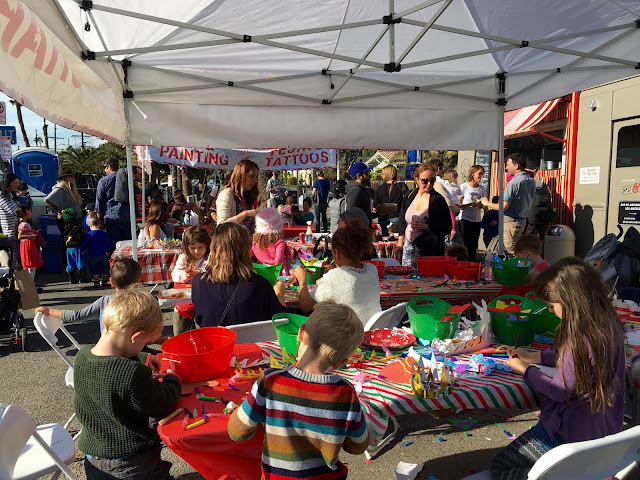 Listen, whoever you are ... RELAX. It's once a year. Some kids don't have the resources to get up into the mountains and see real snow, and this is there only shot. It's during the day. It's adorable. You really need to get over yourself, mostly for your own good. In my experience, nobody likes the buzzkill crabby neighbor, and word spreads fast. I"d concern yourself more (and your time would be better spent) with the Bang and Olufsen pop up shop on Abbot Kinney that blasted lousy house music until 2 am on Saturday night. They're days are numbered here in Venice too. OK, back to awesomeness! Carolers strolled the boulevard, and little stuffed elves were hidden around the boulevard in front of shops that kids could discover and go inside and get a prize. Like a neighborhood Elf On The Shelf. Fun! 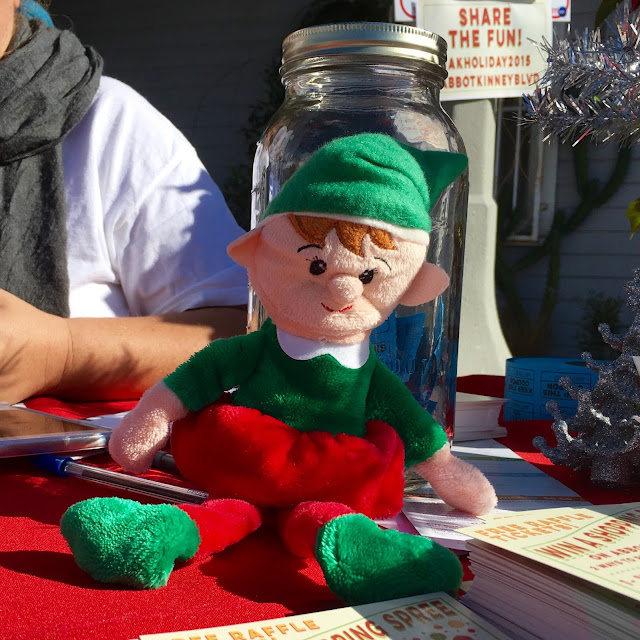 It was great to see what felt like all of Venice out in the sunshine, loving every minute of it. I've never seen the kids of Venice happier, and the whole operation was simply heart warming. 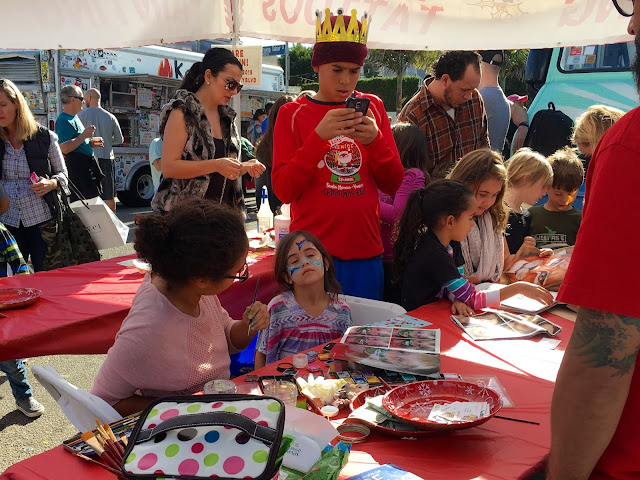 The fun of the day rolled right on into the evening, as it was also the Holiday Boat Parade over in the Canals. My friends, the Revelins, were hosting a fun party at their home on the Canals, so we had a beautifully perfect vantage point to watch the boat floats sail past. 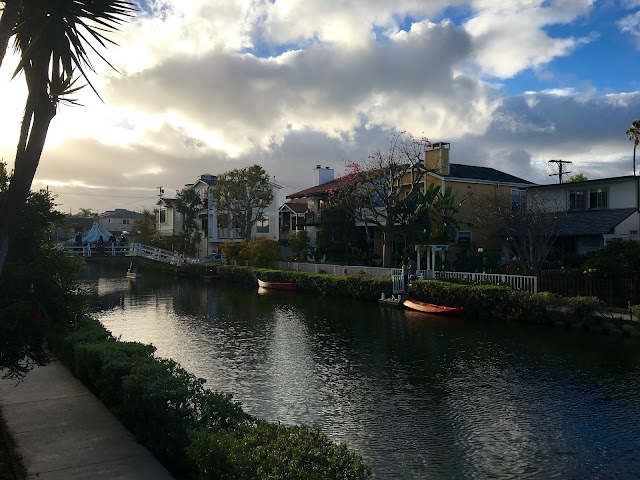 The skies had now shifted into a rather ominous cloud mass, but the Christmas carols and holiday spirits were more than a formidable match for any dampening. The Revelins had what might be the most perfect for Venice Christmas tree I've ever seen. A surfboard tree! 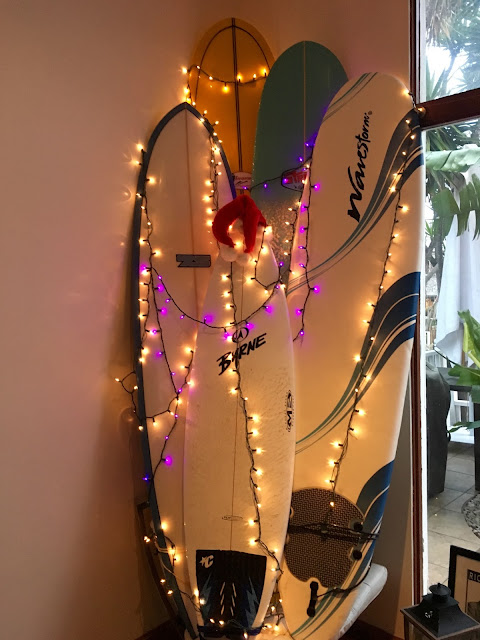 The parade kicked off as the sun was setting, and the first boat to pass us by was a Batmobile, with a Batman that assured us he did NOT smell, and a Robin that really DID lay an egg. 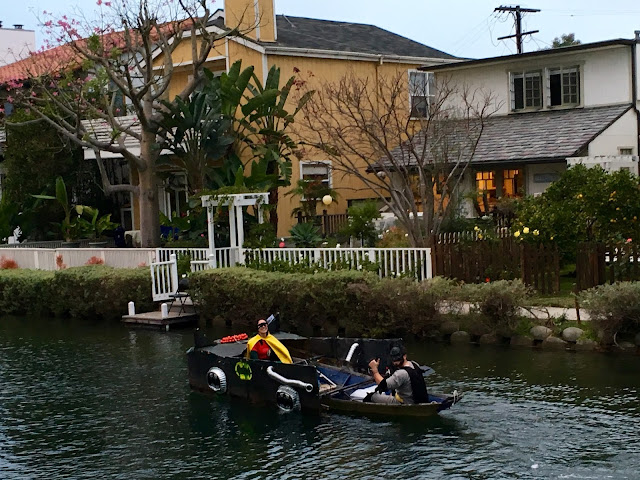 There was a crowd favorite featuring a polar bear, with a sign asking us to "Lend a paw to help the thaw." So great. 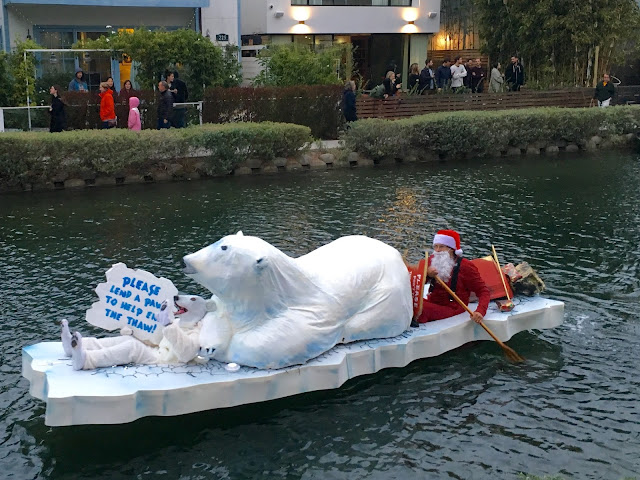 There was a menorah float, there was a fantastic igloo, there was a floating gingerbread houseboat, all paddling as fast as they could to outpace the encroaching thunder clouds. 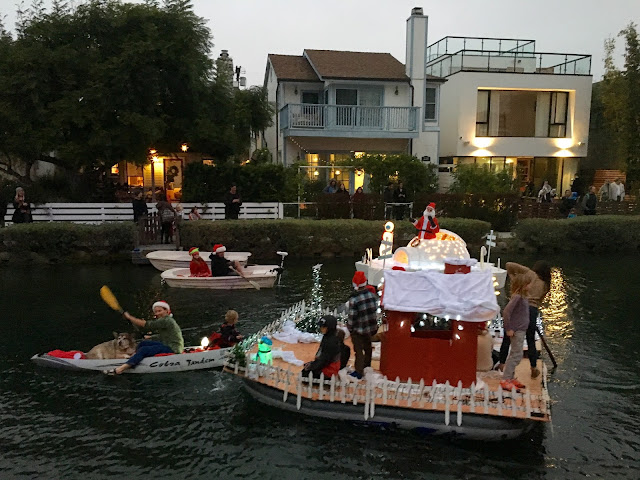 Alas, the rain won that race, but nobody seemed to care, as it just made it feel more wintery that we were experiencing actual weather. 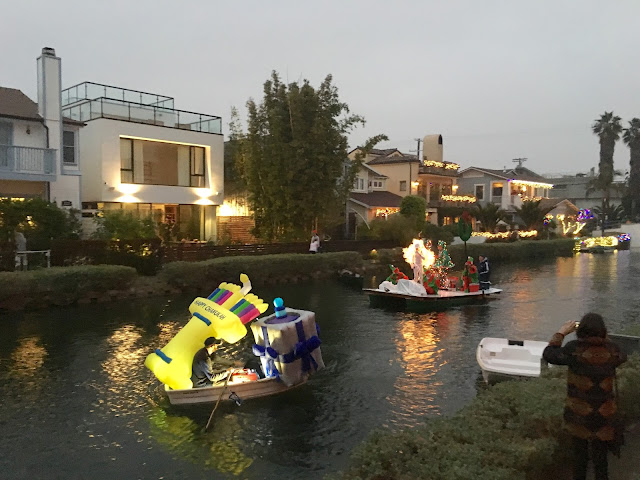 A beautiful sea horse led float may have been my favorite, though I did confuse them for dragons at first. 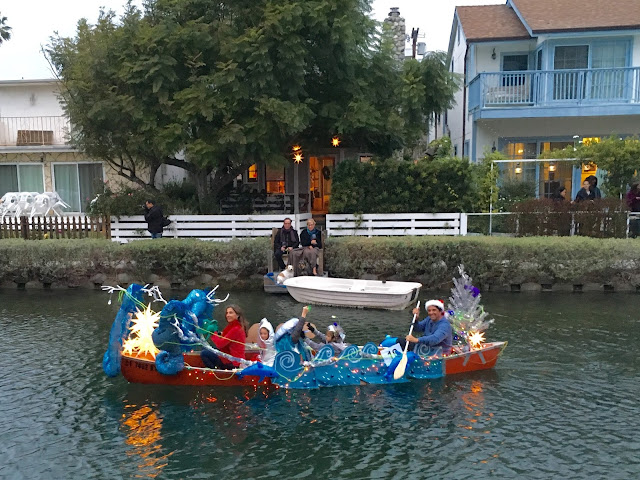 When the rain picked up steam, we retired inside to sing Christmas carols led by our host, Rick, on guitar. The best was the whole gang belting out "War is over, if you want it ... !" at the top of our lungs together. It turns out we really do want it. It was perfect. 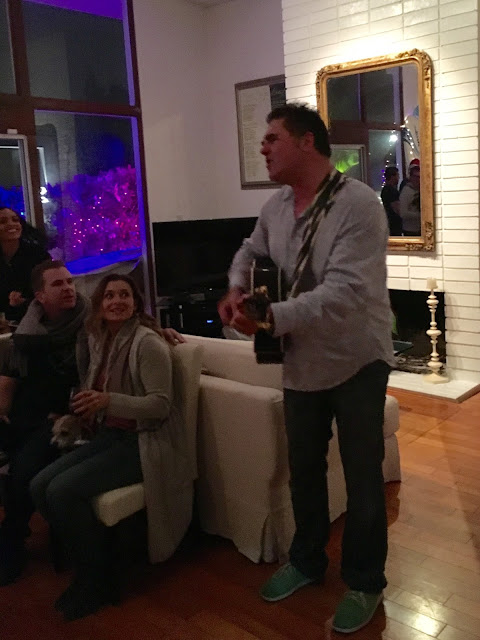 While warming up with our holiday cheer inside, the stars re-emerged outside, and it was time to take a stroll around the canals to see how all the bridges were decorated. 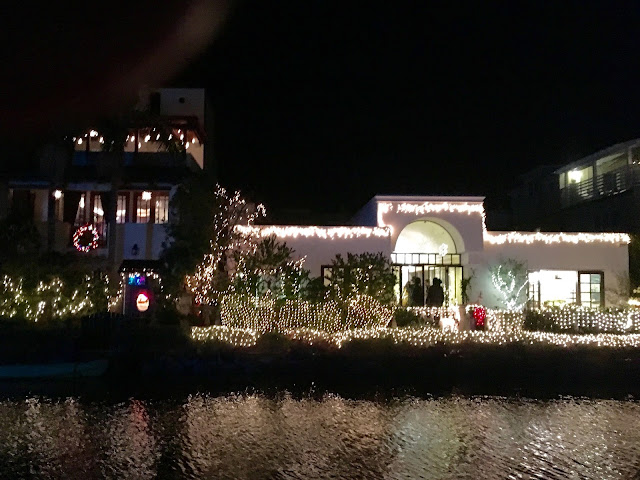 There was a bridge with ships, and a bridge with a Matterhorn looking mountain on it. All the lovely bridges reflected their lights on the water, and as people were photographing each other atop the bridges, new friendships were made. Everyone was laughing so hard in every photo, it was kind of hard to get a good one. Not a bad problem to have. 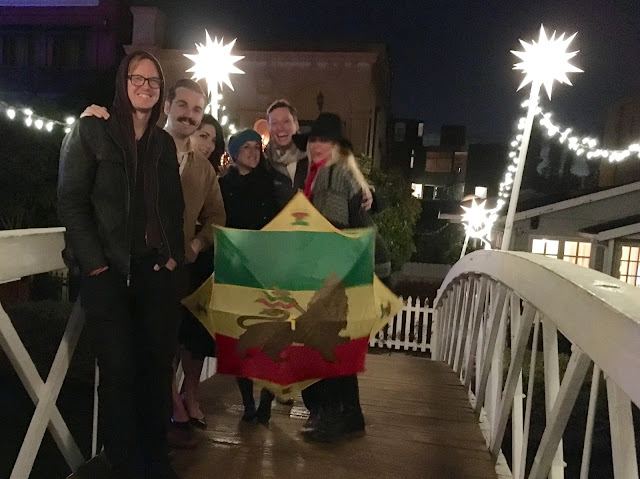 A bunch of our Venice crew was in New York to celebrate the wedding of our friend, Lexi, but another big bunch of us couldn't be there, so it was perfect when we crossed the bridge that said "Kiss" across the top of it, with a sign saying that if you kissed on this bridge, it would be eternal love. I blew a kiss to Lexi and Lewis and wished them exactly that! 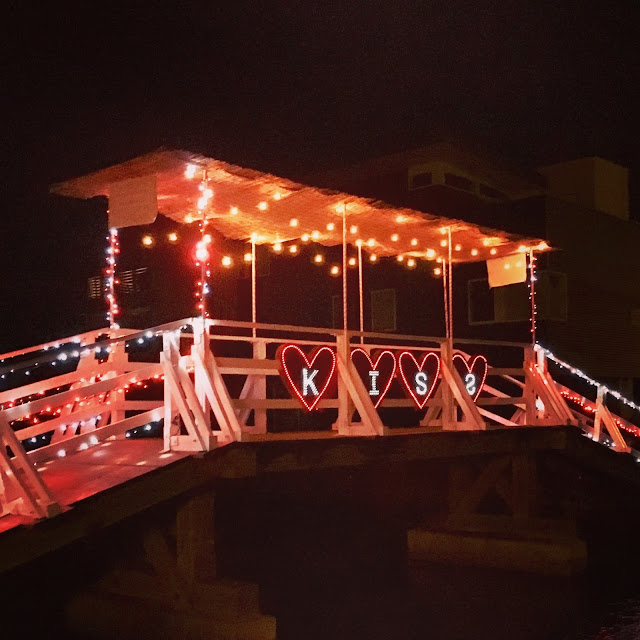 And really, LOVE is the whole point of this season, and for events like this. Spending time with our loved ones, letting them know how much we love them, and going big to celebrate exactly that.

Love was also ALL I felt for our Venice yesterday, with its spirit of humanity and fun and good times always buoying up the proceedings. Thanks and love to all involved for what was a complete blast of a special, memorable day!