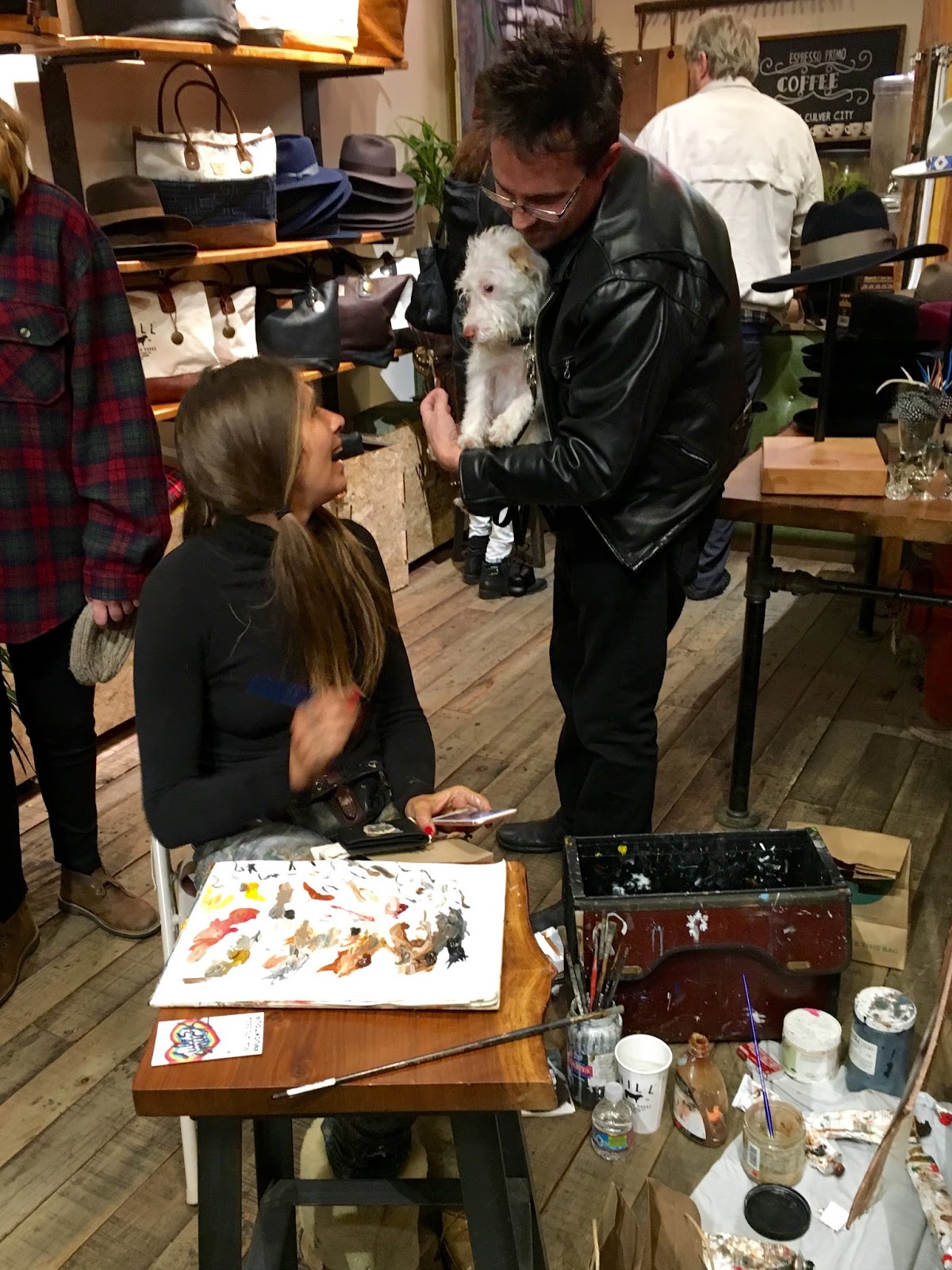 The Holiday version of the Venice Art Crawl took place last night, and as usual, it was a complete treat for the neighborhood. Also as usual, you pretty much need a jet pack to get around to all the spots, but even without the jet pack (that we were promised by now!), I did pretty good. REALLY good, considering I was on foot (slightly faster than actually crawling) and had no map. 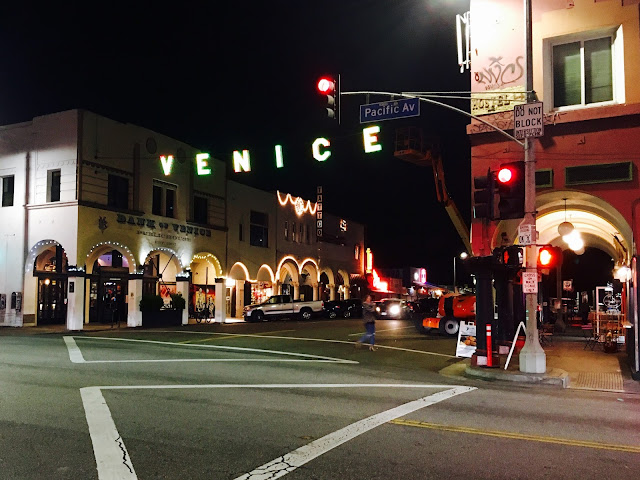 I was wrapping up things with work to get away for the holidays, so didn't get down to the Venice Pier in time to see the Electric Bike Parade take off, and would have loved to have taken part in that, seeing all the fun they had. I got home and hit the ground walking, starting off at Will Leather Goods on Abbot Kinney where Jules Muck was back in town and doing live paintings on leather. Of peoples' pets! 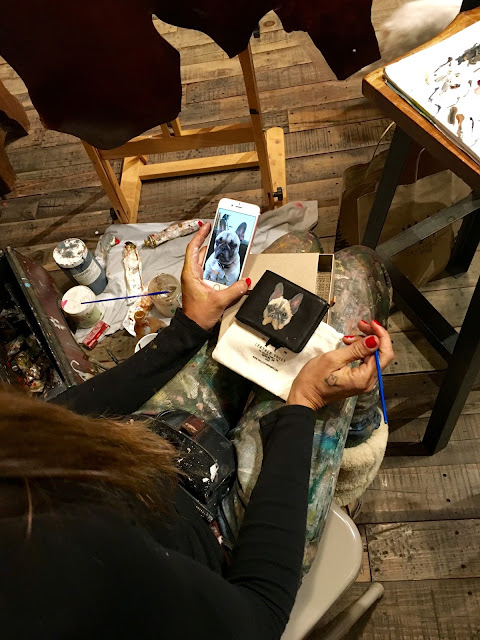 People queued up to get their little dog or cat portrait painted by Muck on a wallet, bag, or even a soccer ball. It was great to see Jules again, and great to see people get so excited about both her work and their pets. 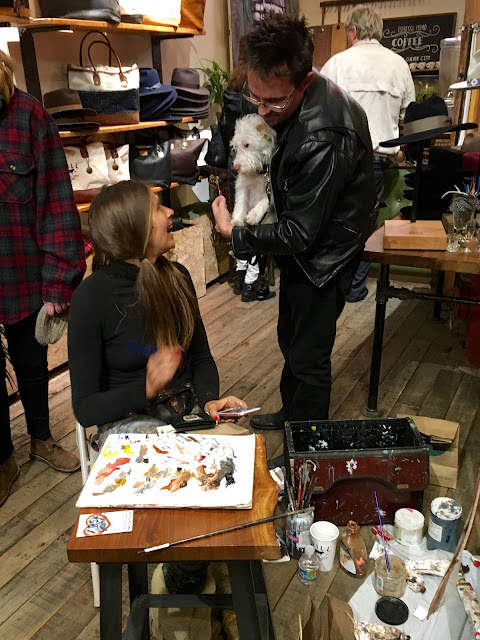 Carrying on down Abbot Kinney, there were a lot of people out and about, but I was on a mission that could not be stopped unless it involved art. I got to In Heroes We Trust just a little too late to enjoy their  holiday nog ... 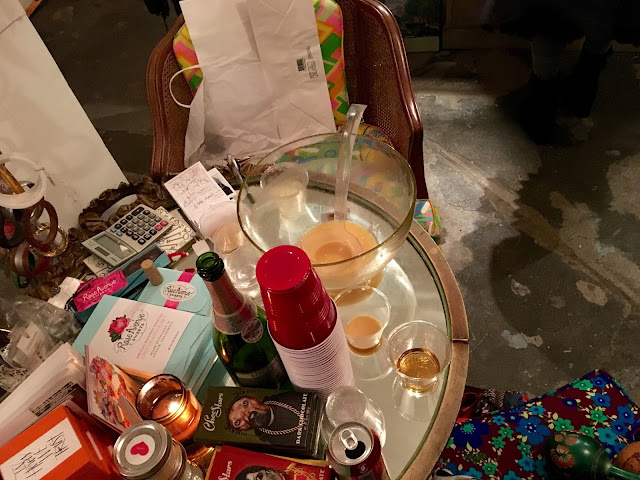 ... But the holiday cheer was in full effect nonetheless, with revelers bundled up to combat the slight chill that we all think is Winter here. There was art, there was hula hooping (even in tiny toddler sizes, that one little moppet kept slamming into me with, and it was no problem), and there were gifts galore in case you could tear yourself away from the partying to check some things off your list. 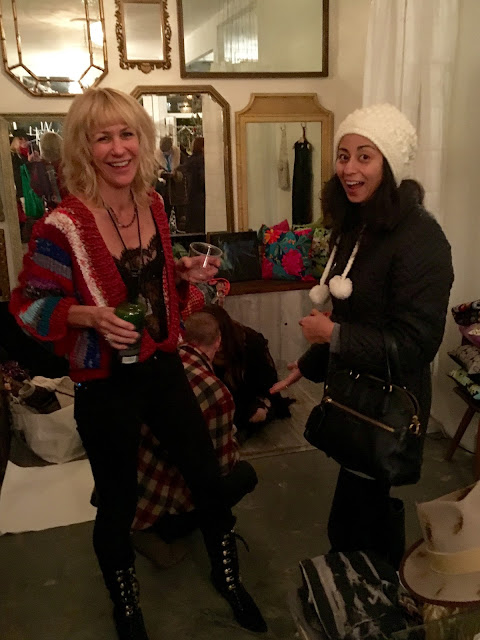 I checked a great thing off of my list when I headed over to General Admission to have my Locals Only (awesome SoCal skate culture in the '70s photo book) book signed by the photographer, Hugh Holland. They had prints and Tshirts of the iconic photos available as well, which would make the perfect gift for the surfer or skater in your life (as would anything from Venice Originals, but they were closed for the night). 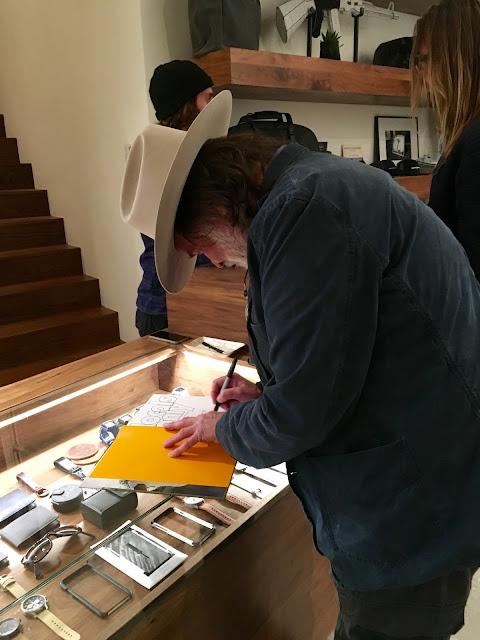 Across the street at Gotta Have It, it was going off, with both live music and live coloring, courtesy of their featured artist, Jared Hoffman. 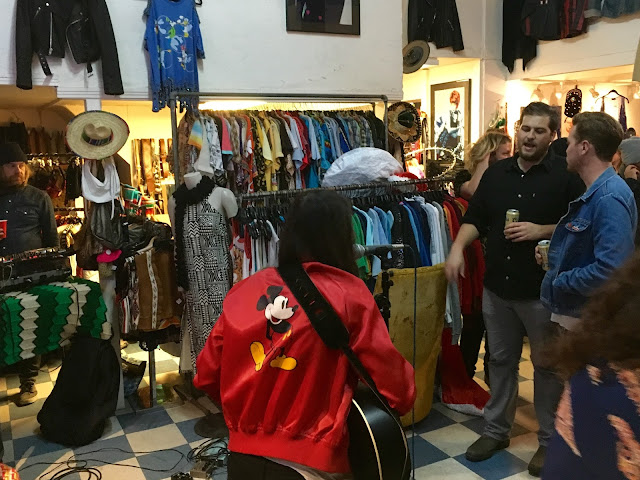 They aren't included on the VAC map (that I still couldn't find and vastly prefer to the phone app to check things off!) for some reason that needs to be sorted out, because their art and parties at the Art Crawls are always one of the highlights for me. 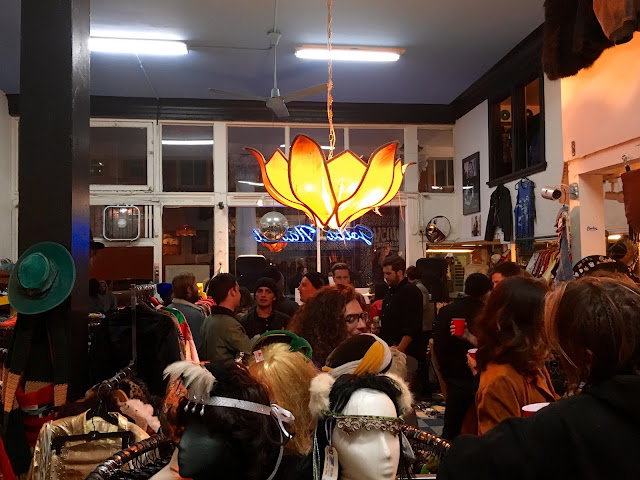 Last night was no different, as a packed house spilled out on to the sidewalk, where I added a little purple to the coloring poster outside. Super fun, every time, bumping into friends left and right - which is actually the very best part of the VAC, even more than the art. 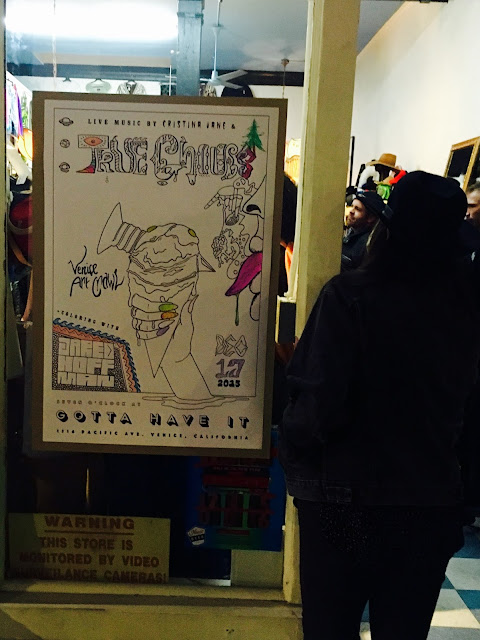 But the art is always rad, and the point of it all. I hitched a ride down to Washington to say hello to my fun friend, Michelle Blackmon at her great new space that featured the art of Lindsey Nobel, the live music of Christopher Hawley, and a light show by Todd Alter (and a spin art thing that you could do yourself!). It was great, and extra festive over there. 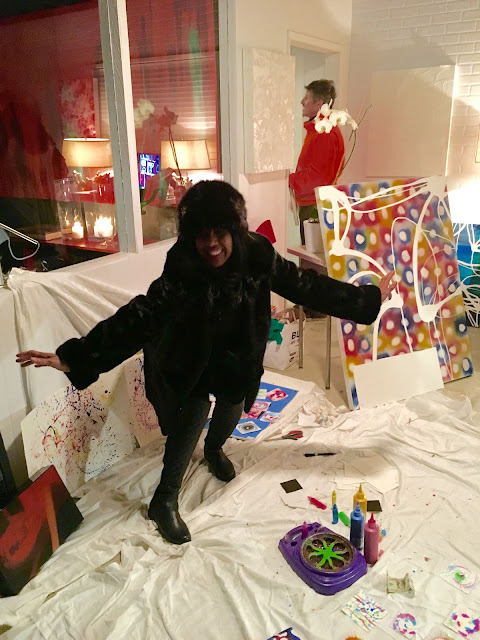 We passed some urban Carolers on the street, which I always love (my name is a verb at this time of the year!), and hit up Arbor (where you could get your photos printed on wood by Lindsey from The Blocksmith) and The Cow's End (where the great Outi Harma, Mark Saterlee and Roitash Rao were showing their work, and in Rao's case, live painting on trash. Awesome). 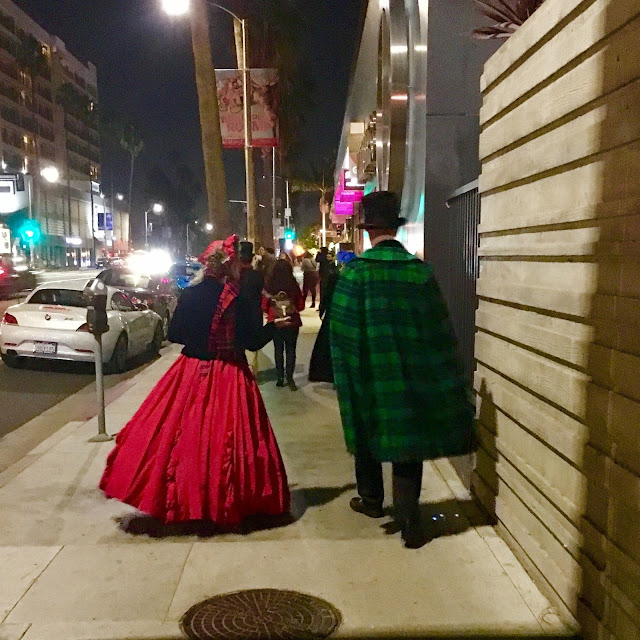 We popped in to Maui and Sons to see the work of Todd Goodman and Martin Cohen - awesome again. We're SO lucky to have so many talented people everywhere you turn! It sure keeps it interesting in these parts. Snowflakes were projected on all the buildings in Washington Square, so we could kind of fake that we have Winter (and it WAS pretty cold by the water). 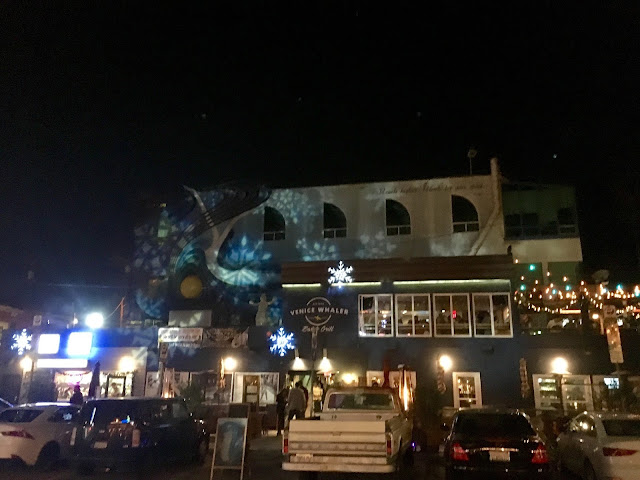 I still couldn't find a map, so I missed some places that I didn't know were showing, but had heard there were things happening in the Venice Pier parking lot. Due to time, I missed the whole actual pier (which I found out later had art in all the little alcoves along the pier - bummer), but I did finally get to see inside of the Yellow Submarine. It was kind of strange, with people just climbing in, sitting on the fuzzy benches, and staring it each other. Okay, great, Clark Griswold nod, bounce. 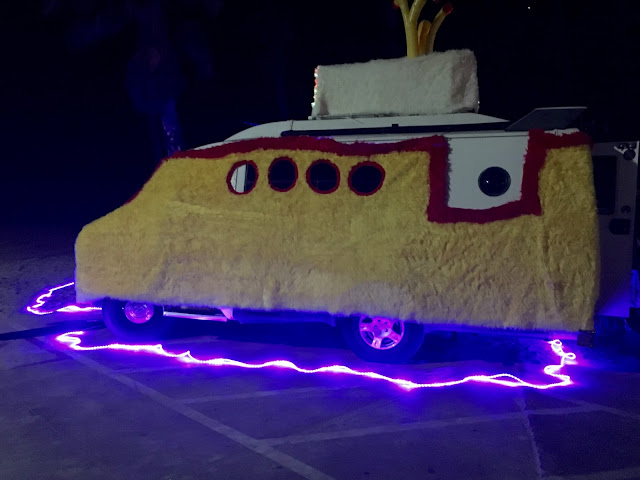 Someone told me there was a giant Nativity scene set up in the parking lot made out of black lights and glow in the dark stuff, which sounded so Venice and awesome, it was kind of the point for us heading that direction. We looked all over and saw nothing of the sort ... until I saw a little cluster of people looking at the back of a pickup truck bed. We walked over and sure enough, there was the Nativity. Not exactly life sized, as I'd heard, but beautiful all the same, and had made by someone's Dad, according to the dog eared map I finally found on the ground. It was lovely. 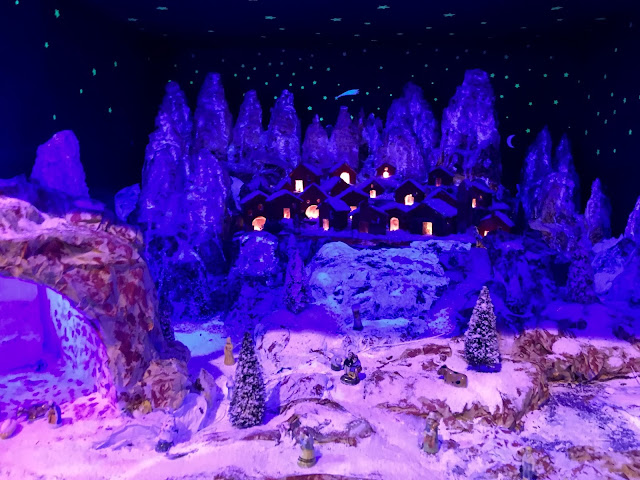 I got a text to get over to the party at the corner of Venice and Abbot Kinney, which I guess is now called The Kinney Collective. I stopped at my house to drop stuff off, and when we walked down Abbot Kinney to the party, it was simply great. I could hear the music of my friends in the band, Nocona, welcoming the whole town to come and celebrate the holiday. 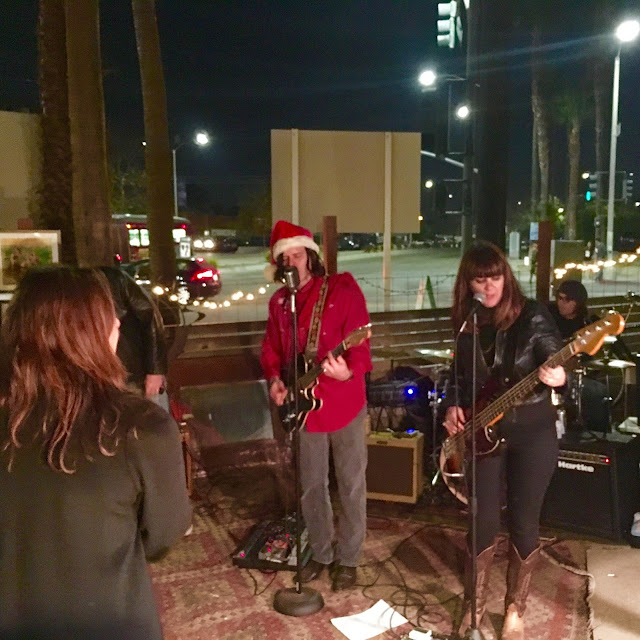 Local artists (Gary Palmer, etc ...), artisans (some of the cutest lingerie I've seen in a long while by CantiqLA), and neighbors came together to kick up our holiday heels right there on the corner in the center of Venice, and it was a blast. The Electric Bike Parade wound up there too, so we all came full circle, and we all loved every minute of it, staying put there until the end. 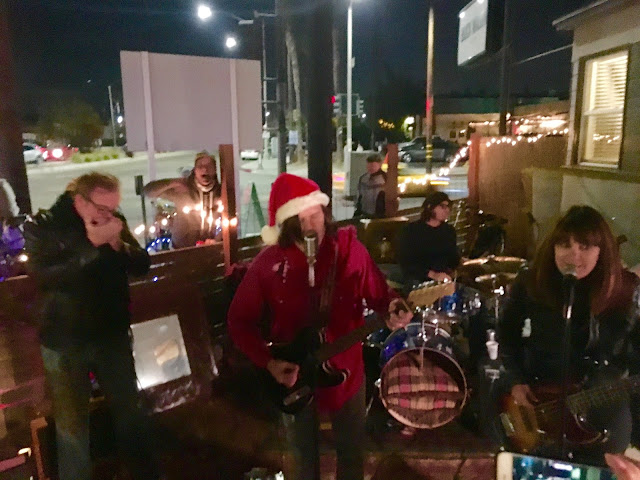 As I talk about becoming the circle, this morning I had to head back over to Washington to see in daylight the mural by Francisco Letelier that was rescued from the Pioneer Bakery, titled Becoming The Circle. It shows our People, residents of Venice, as we continue to endure the rapid change here, while trying desperately to maintain what we love about Venice. Like wonderful things such as the Art Crawl. 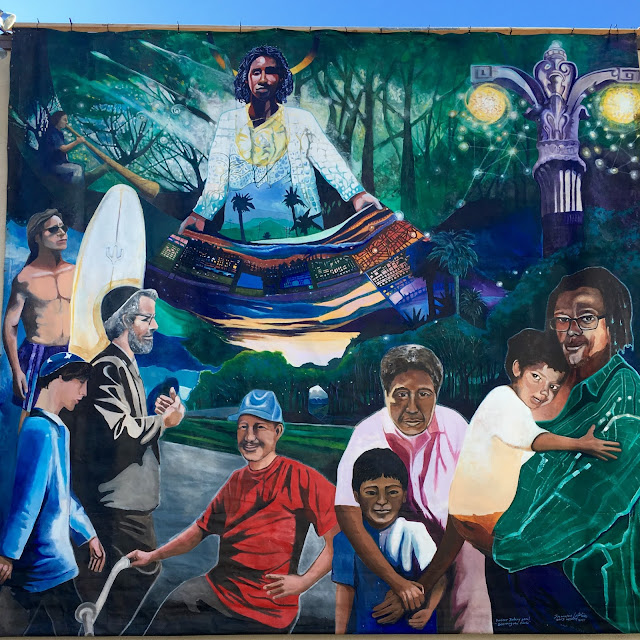 It was a perfectly festive note to wind up the Art Crawl year, with warmth and good tidings tangibly felt at every stop (and, as ever, apologies to all the stops I missed!). Thank you to all from the VAC that continue to work hard to provide such an absolutely Venice experience for everyone who attends. And HAPPIEST Holidays to you all!