Yo Santa Monica? The Selling Of Yo Venice.

A couple of weeks ago I started getting texts and emails from bothered, annoyed, and downright disgruntled friends in Venice, over a snarky little article posted on Yo Venice. In all honesty, I haven't really paid much attention to Yo Venice, since its founder, Bret Haller, passed away from cancer just over a year ago. It just felt different, you know? And now it IS different, because Heller's family sold the site to a corporate media group, that also owns the Santa Monica Mirror. Much like the Jules Muck mural of Haller has now been a bit defaced by graffiti, so now too has his site been defaced. 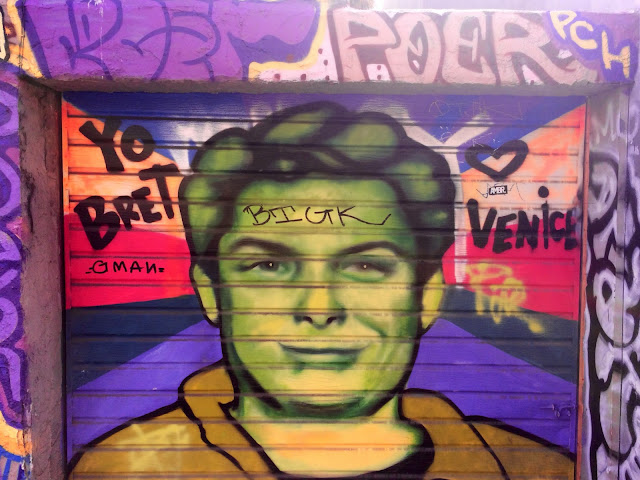 After all complaints I was hearing about this article, and about the new Yo Venice itself, I had to go read the thing. I won't bother reprinting the smarm, because it's infuriating, but you can read it here. If you want.

Its author, Steve Stajich (who I understand lives and works in Santa Monica), ends his bitchy top ten list with "Thanks for the chuckle, Venice. Now, everybody, back to work." Ooooh. Really, dude? Right there he lets us know that he is not OF Venice, so probably shouldn't be writing for a site that represents Venice. And should certainly not be ripping on the town and its sense of fun and freedom. Then, later in the week, I was at lunch in Santa Monica and saw that the exact same article was in the print version of the Santa Monica Mirror! So Yo Venice basically now IS the Santa Monica Mirror. Which I don't read.

That is what the whole topless sunbathing thing is really about. We don't WANT to be Santa Monica. We want to live in a town that values and celebrates freedom and self-expression. We have a topless "Bare Your Breasts" march down the Boardwalk each Summer. We used to have a naked co-ed bike ride down the middle of the Abbot Kinney Festival every year. We had naked poetry readings on Wednesdays at Abbot's Habit. We've always pretty much done whatever we want (and can get away with) in the name of innocent fun and artistic freedom. Now, Money is killing the very spirit of Venice. It is all being threatened with extinction. Not only by the big monied pockets of people that don't get it, but also now, seemingly, by our own sources of news and information.

I was told that Yo Venice is now ran by "a Venice local", but no local I know would have ever dreamed of publishing that bratty article. Bret Haller would NEVER have let that thing get by. I've always loved Yo Venice (aside from the very nasty fake name chat room trolls I've been told about, but can't be bothered to pay attention to), but today I pretty much find myself missing and mourning the old site as much as I do my good friend, Haller.

No worries at all though. For up to the minute Venice info, go to the always awesome Venice Concierge. They're the REAL local deal.

As for Venice, itself ... it's up to all of us who love and care about it to keep it fun, to keep it free. If that means I'm sunbathing topless on the beach, so be it. For Bret, and for the future of Venice. I'll see you out there!