OK, I LOVE My Morning Jacket. I'd never seen them live. I got an invitation from the fantastic KCRW to attend a live show at Mack Sennet Studios to see My Morning Jacket play their excellent new album, The Waterfall. I was THERE. 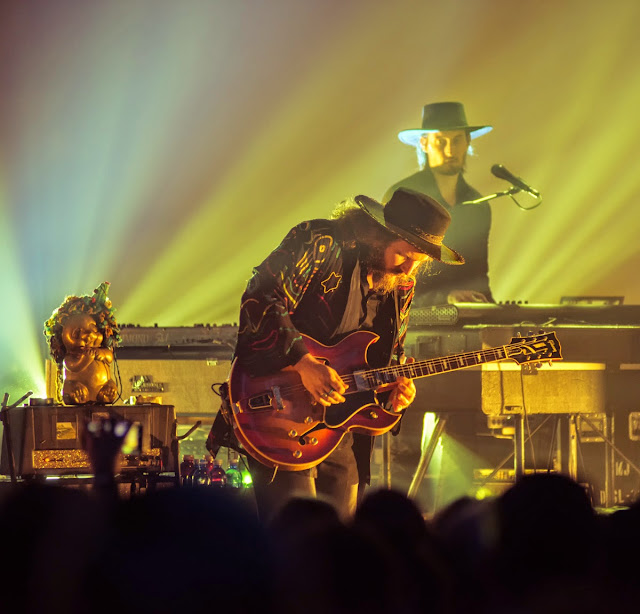 Gnarly traffic got us there the instant the show began, so there was no time to indulge in the open bar before squeezing in to the jam-packed house there to see these super talented gentlemen throw down some rock and roll. I'd spent the whole previous evening listening to the new album on repeat so I'd be familiar with it to double enjoy it all, so it was even better, and awesome that they played it all in order. Thus, they opened with the album opener, "Believe (Nobody Knows)" and the people just went crazy from thereon out.

"Compound Fracture" and "Like A River" were up next, and you could feel the reverence for this band in the room. People seriously LOVE them. For good reason. Even though some in the room may not have even heard the album yet, they were all the way into every single note hit. 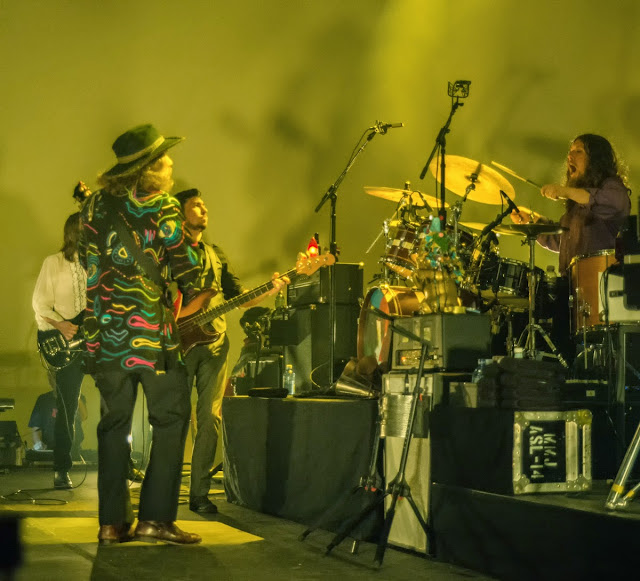 The room was a sweltering hot box with all that body heat squashed in there, and nobody minded a bit. The crowd was a mix of older NPR bookish types and total textbook hipsters, rounded out by KCRW staffers, and everyone was enjoying it as much as anyone could. Zero jadedness, just pure, unadulterated joy and appreciation to be there. That was tangible in how polite and kind everyone was to each other, moving aside for shorter people, not caring when a drink spilled on you ... it was that kind of vibe, and probably a tribute to the band, and our hosts.

The older couple in front of me were pretty much making out and dancing together the whole time, and I loved them for it. I want to be them when I grow up. They loved "In Its Infancy (The Waterfall)" and they really loved "Get The Point", clearly already having committed its lyrics to memory. I wish you all the love in this world and beyond ... I hope you get the point,  the thrill is gone ... Maybe the nicest breakup song ever. It was impressive all around. 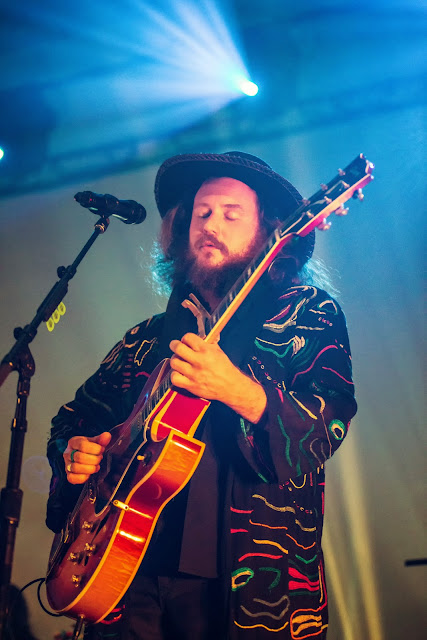 Jim James wore a technicolor dream coat, which went great with the trippy Joshua Light Show type swirly lights dancing around us. James is a shaman of sorts, and he's very hard to take your eyes off, except maybe to watch the shredding of guitarist, Carl Broemel (that's the side I was on, I'm sure Bo Koster, Patrick Hallahan, and Tom Blankenship were mesmerizing too, I just couldn't really see them). 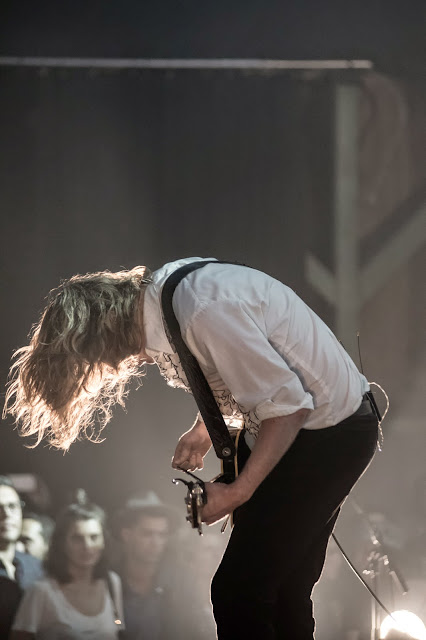 "That song was a matrix to get lost in ... we wanted it to be disorienting, but pleasant, we hope.", said James after a particularly psychedelic passage of "Spring (Among The Living)". People were FEELING it in there, and a guy near me thought aloud how much he wished he was on acid. I've never done acid (perhaps surprisingly to some), but this one made me kind of get it.

After "Thin Line", James thanked everyone for coming, saying that they'd only ever played these songs two or three times, "So it's nice to be playing them for actual human beings." He's right, it was super nice, even more so that the show was being live-streamed on KCRW (and airs on the radio next Wednesday, May 13th), so the whole world was able to be in there watching with us ... though I have a feeling it wasn't quite the same. Or as hot. 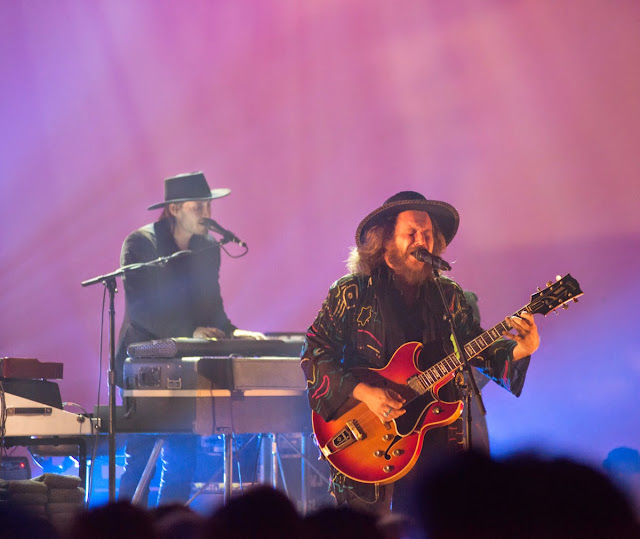 "Big Decisions" almost got a bit metal, with a smoooooth ending. I think my favorite track off the new album is "Tropics (Erase Traces)", as it's already almost caused a skip in my Itunes there. So, so good. They closed out The Waterfall with its closer, "Only Memories Remain", another smooth, gorgeous one, that builds and builds until it was an awesome jam that was so good my friend Brad had to leave to mull it all over, missing the encore. He was MOVED. I'm pretty sure we all were.

The band left the stage for a minute, and then came back out and James said, "I've never given birth before, but when we finished these songs, it felt something like that, with not a millionth of the pain. The songs are new and fragile, and you go 'what the fuck do I do in this part?' ... and then you remember to forget ... We're so proud of them." They should be. It's a great album, as everyone expected. 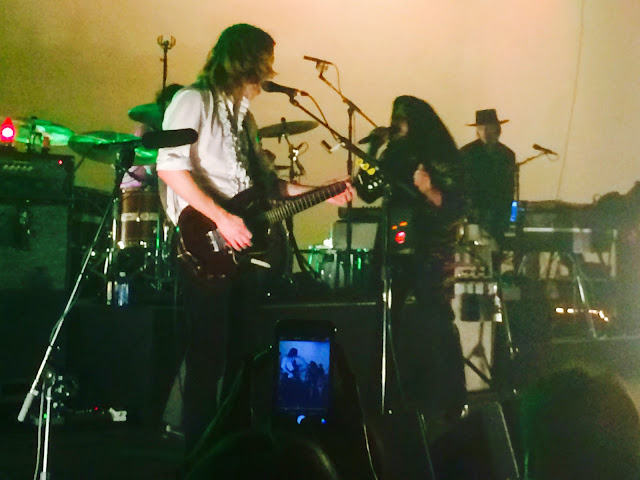 The encore of classics began with "Wonderful", which it surely was, then "Down On Bottom" that had the whole place clapping and dancing along. For "Circuital", James went and put on some kind of little Simon game looking machine around his neck, pulled up a monk type hood, and walked around the stage, singing all distorted and cool. They closed - appropriately - with "Victory Dance", and so it was for us all, just to be there. 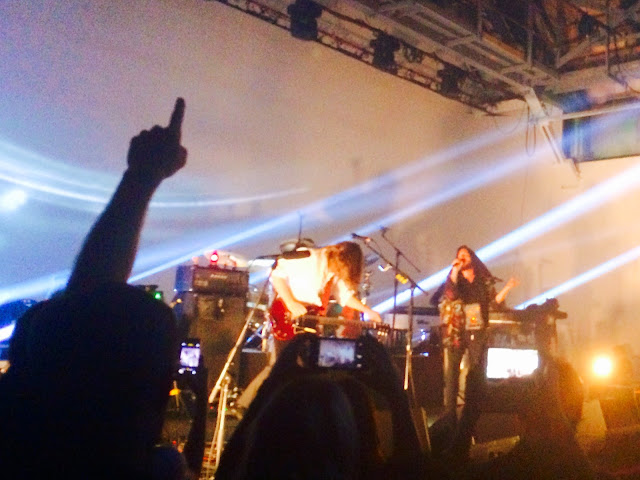 Phew! We all exploded out of there into the night, only to find a beautiful, sorely needed steady rain falling from the sky, so maybe it was a rain dance in there as well. All I know is that it was perfectly, indeed, wonderful.

Thank you so much to KCRW and NPR for having me, and to My Morning Jacket for completely stoking us all. Go get The Waterfall right now. You'll love it.

*Great photos courtesy of KCRW's Ethan Shvartzman. (OK ones by my phone.)