Once I made my decision to fully embrace the chill of winter and have all the snowy fun I can while I'm here in Minnesota, the opportunities to celebrate the frost and snow keep rolling in. I was delighted to read that the Minneapolis Institute of Art (MIA) is going for it too, with a new exhibit all about our most famous season. Frosty Weather, Snowy Weather is a little show that was perfect to take in on a day of flurries and frost outside. 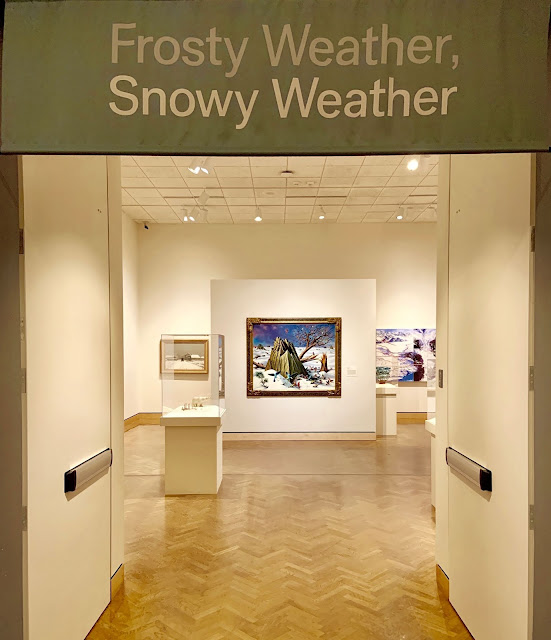 I say little because it's only one room, but the art they've put together in this celebration of winter is definitely enough to put you in the mood for snow. 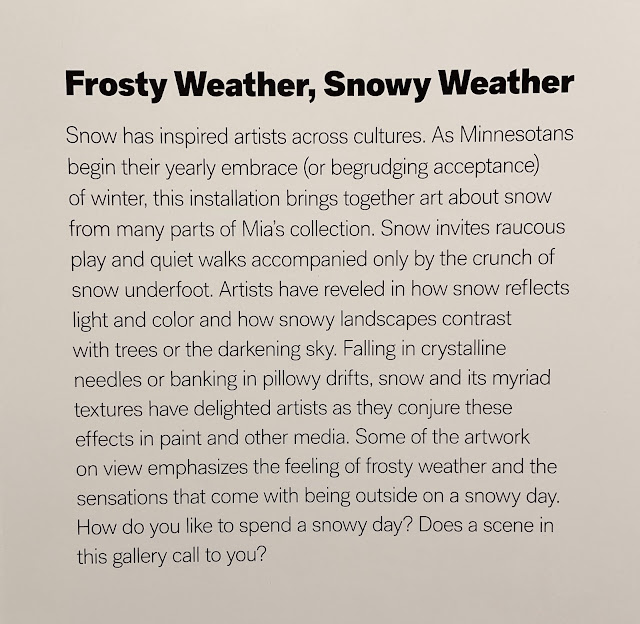 As my Mom is still recovering from shoulder surgery, and is on one real leg, it's been a little bit sketchy to take her out and about on the slippery, icy sidewalks. We were both getting a little stir-crazy, and to be honest, an art show about winter wasn't met with enthusiasm from her at first. Once inside the massive museum though, she was fully stoked, as she's a fine artist herself. She likes to really take in the pieces, reading all the blurbs, and examining the brush strokes. I was hoping she'd use it as inspiration too, as we've got a slew of empty canvases waiting for her to make beauty on them. (She doesn't need a wheelchair all the time anymore at all, but we just use it for big places like art museums or malls or big places like that). This was her taking in Brook in Winter, 1914 by E. Ambrose Webster. She dug it. 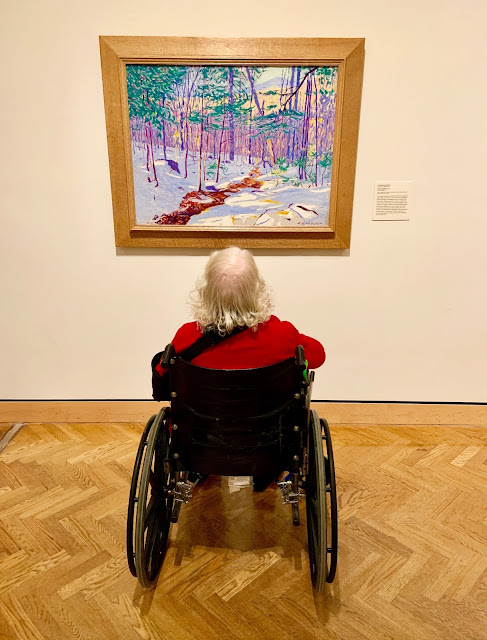 The centerpiece of the show is Winter, 1964 by Peter Blume, and it was probably my favorite. Part of Blume's Four Seasons series, the brightly colored birds against the snow and sky was strikingly beautiful, and Mom and I both loved it. 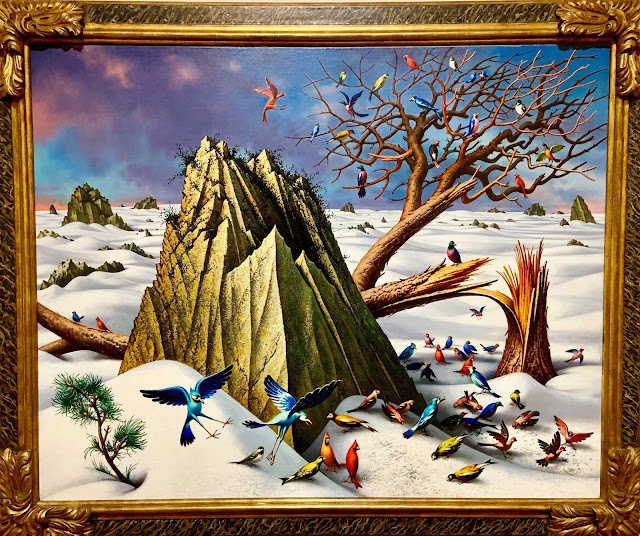 Another favorite of mine was L'Avenue de Neuilly on a Winter Day, 1874 by Luigi Loir. It was much more striking in person, like almost a photograph, and though we have plenty of ice and snow here, it still made me want to be on L'Avenue de Neuilly with that dude in his wagon. 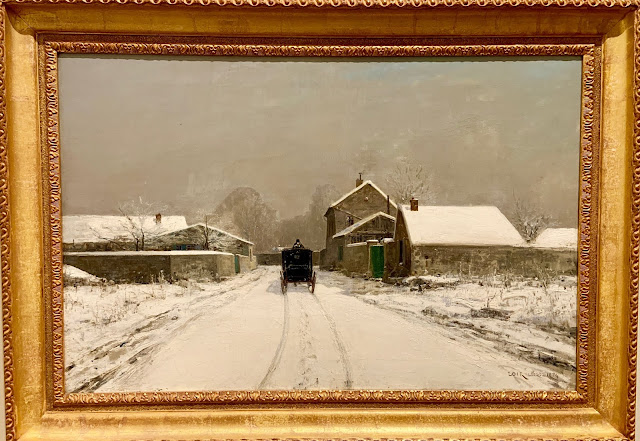 Snow Squalls, 1909 by Rockwell Kent brought to mind Orcas ... but it was really just the sea. Again, the colors in person made it so much more vivid ... another reason to go check it out yourself if you're able. 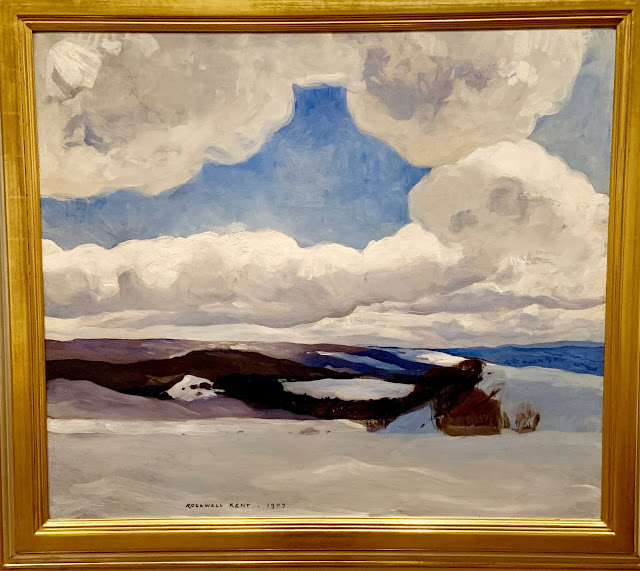 A hand-colored lithograph by Wanda Gag, Winter Twilight, 1927 looked like an illustration to a really good children's book. The glowing windows beckon you inside, while the lack of footprints in the snow suggest that everyone is all safely tucked in for the night with their Netflix. 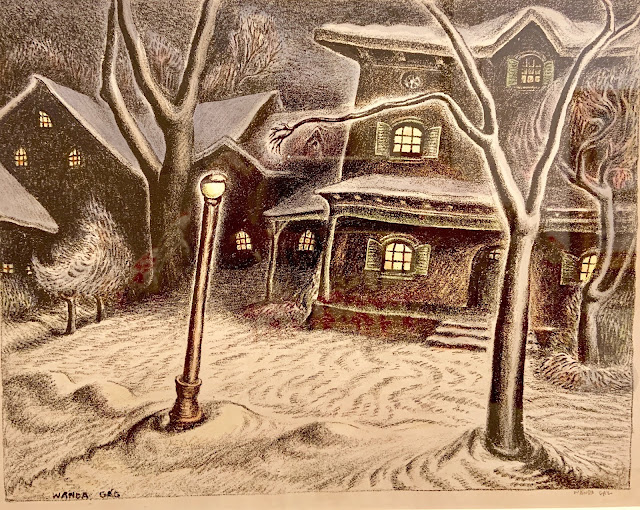 Diane Burko's work is all the way up my alley. A feminist organizer and environmental activist (aka a Soul Sister), her Columbia Glacier: Lines of Recession (1980-2005), 2011 show how the Columbia Glacier in Prince William Sound, Alaska has been melting and receding catastrophically over that 25 period ... along with the rest of our arctic ice. Something MUST be done, and I'm happy to see that artists are getting involved through their work as well. Heavy. Important. And somehow still beautiful. 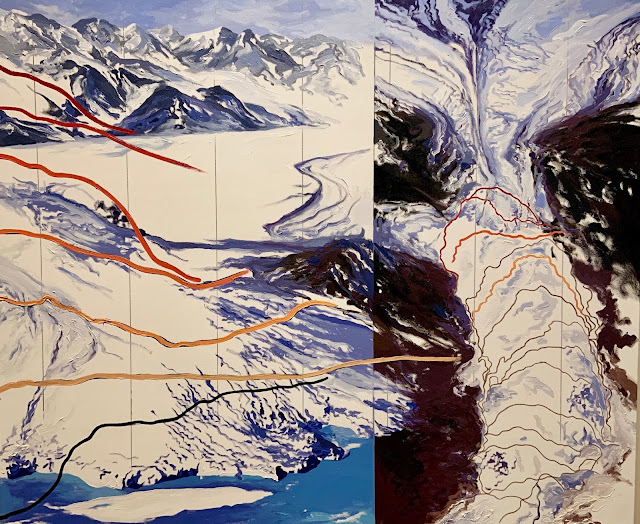 Another series of Four Seasons was by Wendy Red Star, and her Winter, 2012. Red Star stares at the camera in traditional Native American costume, while sitting among a clearly artificial natural setting, asking viewers to look closer at their perceptions of history. Cool. 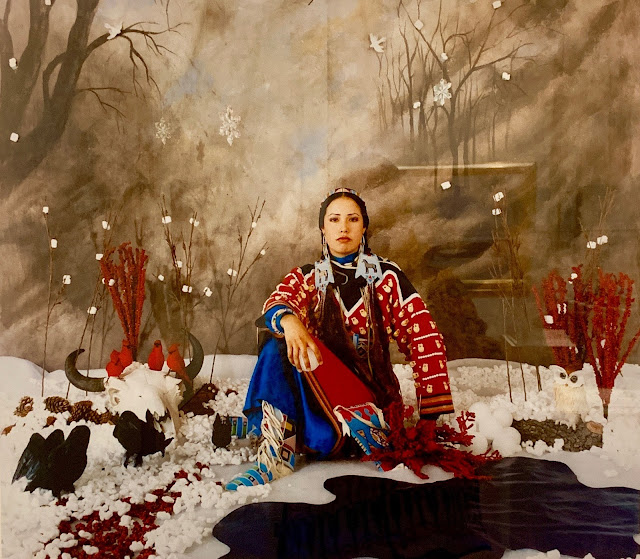 Winter Window, 1941 by Charles Sheeler was great because it really felt like you were looking out at your friends in the snow below, making you want to shout, "Wait up!" and get inside that thing. This one caused me to linger ... longingly. 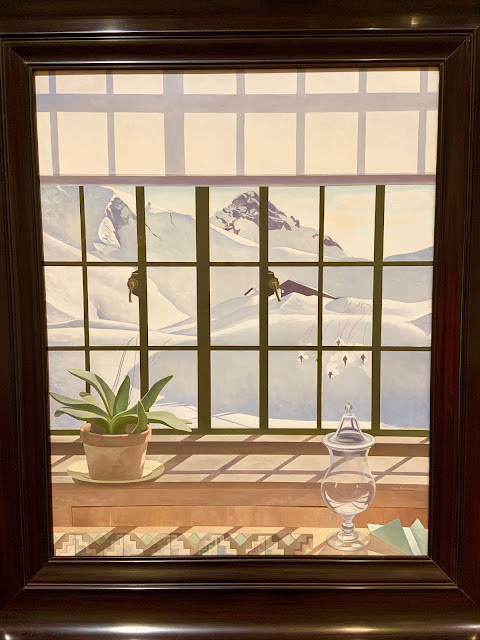 I feel like every other painting was called Brook in Winter or Snow or Ice or something, and there was Brook In Snow, 1953 by Marguerite Thompson Zorach. I enjoyed the colors against the snow, but something about it felt a little dangerous. Like, don't fall in. 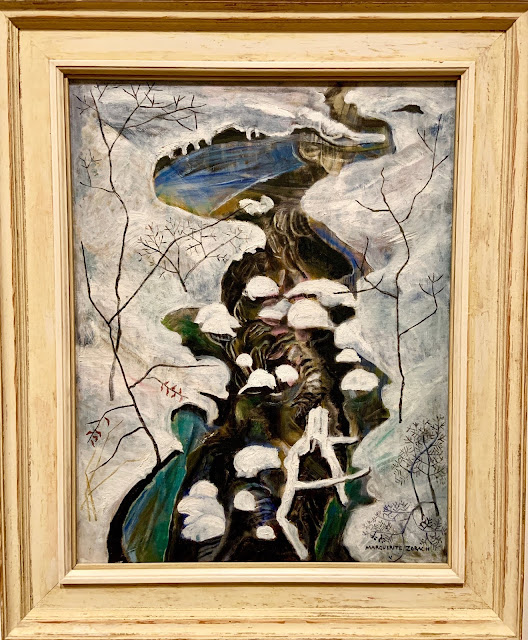 There was an all white piece that made me go "Oh, C'mon, is this from the play Art?" (the play where three friends argue about the value of an all white canvas ... "It's Art!") ... but upon closer examination, Untitled #14 (Icehouses), 2001 is a photo from a camera left outside in harsh weather in an attempt to capture the disorientation of being caught in a snow whiteout ... and there on the left side, barely legible, is the titular ice house. Pretty cool, actually. 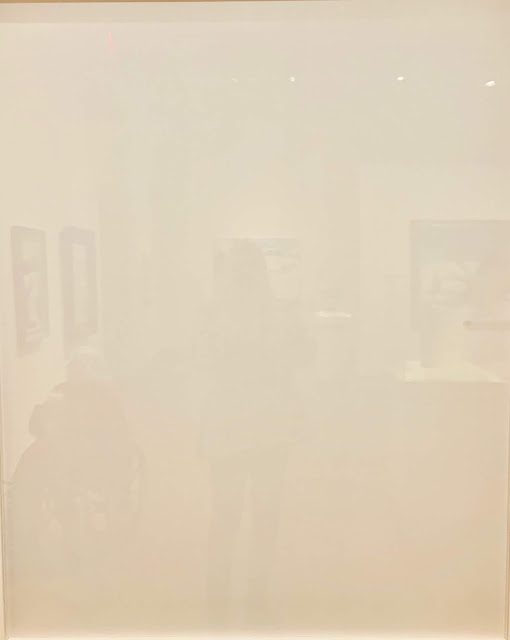 Winslow Homer was represented by his piece, Prout's Neck in Winter, 1892. I had to look up where Prout's Neck was (Maine), but you could tell it was the East coast just by standing in front of it. Winter in the east ... so cold and lonely looking, but again, beautiful all the same. 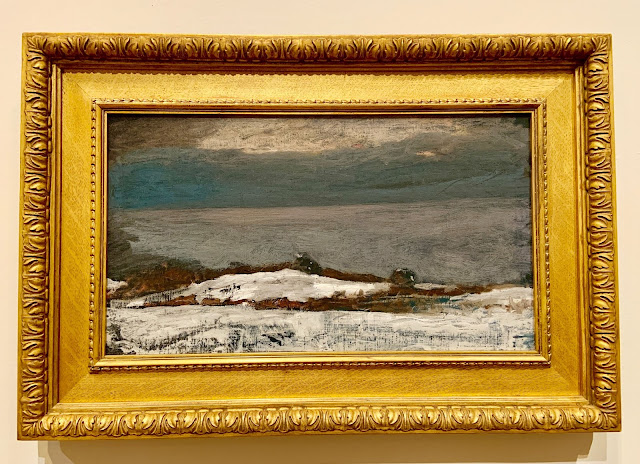 Enjoying a hot coffee in the MIA café while watching the snow fall outside was the perfect finale to a show about snow, and I hope you'll get to copy us, because it made for a lovely winter afternoon ... and it's free! Love you, MIA. Thank you. Happy Winter!

Frosty Weather, Snowy Weather is on exhibit at MIA through April 12, 2020 (when it will probably still be snowing in April).