Happy Valentine's Day, Lovers! In the interest of not going insane, I always try and seek out cool and interesting stories, places, people ... things that I know will bring me some joy and some beauty and some information. I've been a little obsessed (like my Venice hummingbirds obsessed!) with the Swans of Monticello, Minnesota for the past couple of months, as I tried to go see them in December with no luck. There is a Swan Cam set up to look at the wintering trumpeter swans that come to this little bend in the Mississippi River each winter, where the water is a little warmer (I don't believe it) due to the curve, but also this is where they know they are going to be fed. I thought it would be a perfect story for Valentine's Day, as I had heard that swans mate for life, and that's a nice little love story for the day ... but what I learned was an even better one. 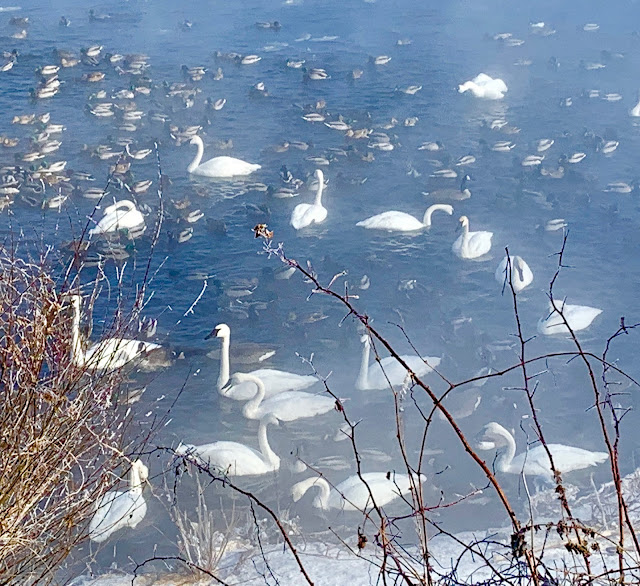 Over thirty years ago, a pair of trumpeter swans were released from Hennepin Parks in a partnership between the DNR, the private sector, and the public in an attempt to restore their population (after they were believed to be nearly extinct in the 1880's). A local woman named Sheila Lawrence lived on the banks of the Mississippi River in Monticello, and began feeding shelled corn to the swans that she saw taking a breather in the open waters by her house. (Photo from their brochure) 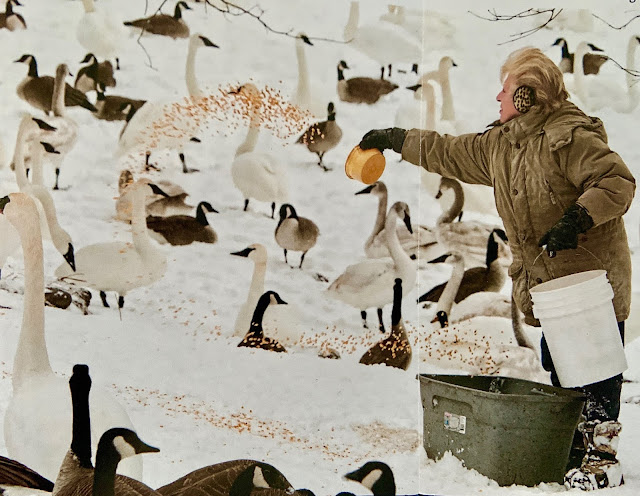 Well, word got out and soon the swans numbered in the hundreds, and then the thousands. Sheila spent her entire days hauling corn and feeding the swans, all out of her own pocket (and donations from friends here and there - this is not a government funded operation). She soon became known as the "Swan Lady", the area became known as Swan Park, and now you can see these gorgeous creatures there in the winter from December to March. 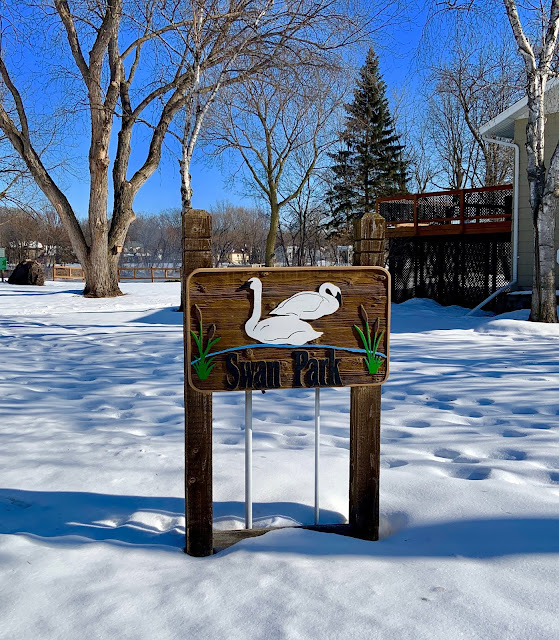 It was a bust in December when I went, because it was too warm and the swans were still out in the corn fields, fat and happy. I've been keeping a close eye on the Swan Cam so I knew the crowd was growing, and when I woke up yesterday it was -11 outside! I knew this was good news for swan viewing, so I got my Mom and myself all bundled up, and we hit the road for Monticello.

The Swan Park is on a dead end fully residential street, and as soon as we opened the car doors we could hear the call of the trumpeting swans! Exciting! Mom has to walk a little slow these days, but we were both trying to hustle - from both anticipation and the freezing cold! Steam was rising off of the river from the cold, and you could see ice bergs flowing by. Three GIANT swans FLEW by, and we forgot all about the cold (for a moment). I'd never seen a swan fly, I don't think, and it's nuts. Their long necks stretch out straight and their wing span was huge as they swooped in for a landing along the banks where all of the corn feed was ... and hundreds of their friends were down below.  Wow! 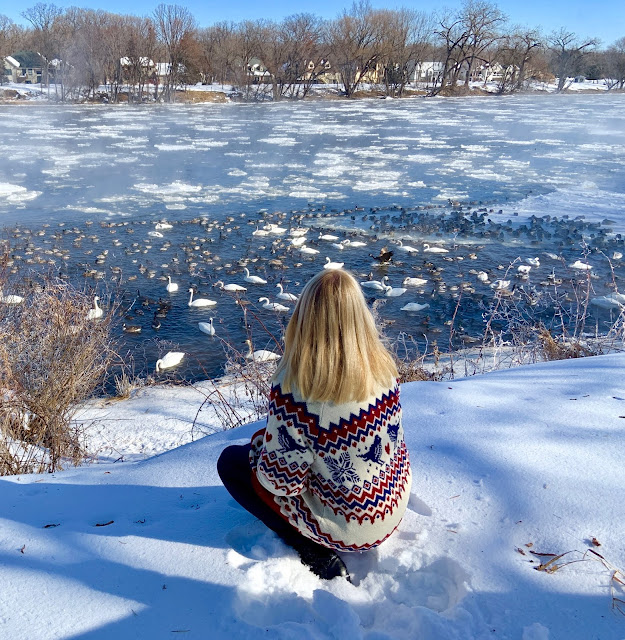 I had heard that the feeding was done every day at 10:30 am, and I saw a guy down by the water tossing corn at the swans. I waved at him, and he came over, probably to see what this crazy girl was doing outside in a sweater (it's a lovebirds sweater, in homage to the swans!). This turned out to be Jim Lawrence, the husband of the late Swan Lady Sheila, who passed away in 2011. As Jim told us everything you could ever hope to know about swans, I realized that THIS was the real love story. 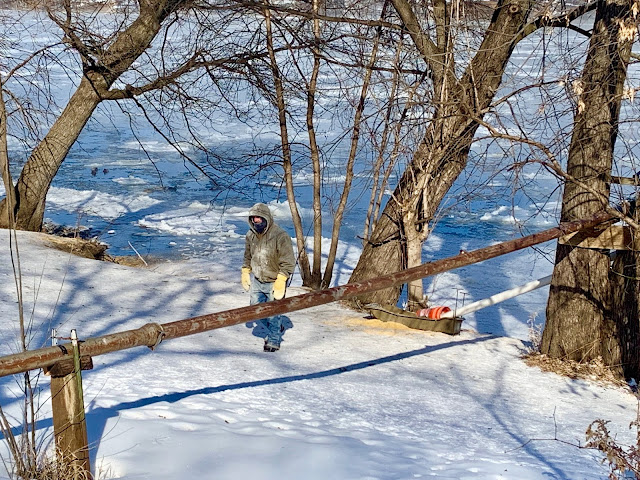 Jim was a dairy farm boy from North Dakota, and talks like one. He told us how the original swans were tagged to keep track of, and old #7, well, she was what you would call a "Boss Cow". She came in and if Sheila wasn't out there at 10:30 on the dot, this swan would come right up to her - at eye level on her 5'2 frame - with basically an arched eyebrow and tapping at her wristwatch, like C'mon, Swan Lady. Every other sentence Jim uttered was about Sheila, and he is now out there every morning at 10:30 carrying on the legacy of his Swan Lady. It was incredibly touching, especially when he said that he knew she was up there feeding all of the feathered and furry creatures in Heaven, looking up as he said it. 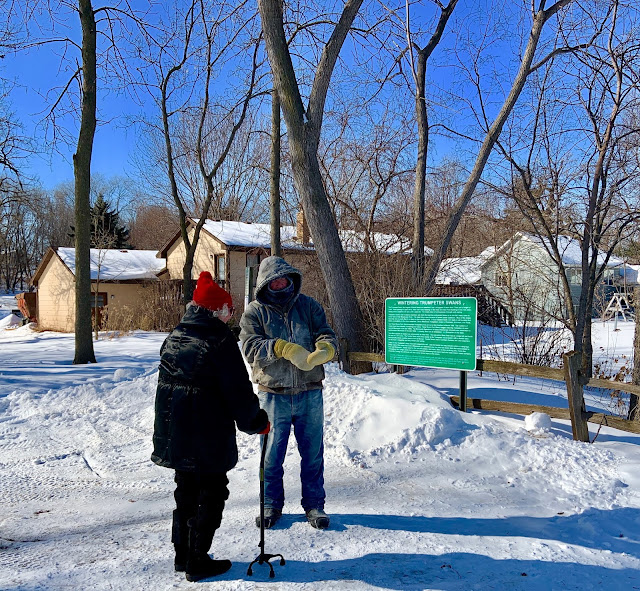 When he looked up, I noticed the icicles forming on his eyelashes and beard, and thought I'd better get my Mom back inside the warm car. Jim walked and talked us all the way back, with more swan trivia as we went. I wanted to go back and take more pictures and just watch the graceful beasts a bit more, so Jim walked and talked me back. He wouldn't let me help him feed the swans (it's a liability thing), but I bet I could now step in as in information guide if he ever needs me. The love he has for these swans - and for his late wife, Sheila - literally made his eyes sparkle ... and it wasn't just the icicles. 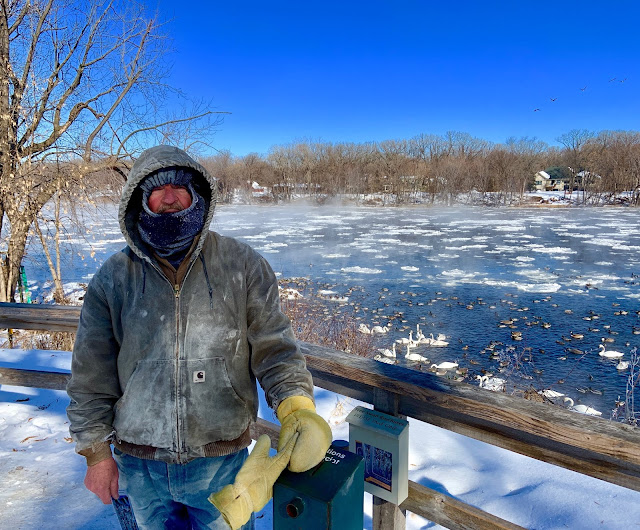 I had to ask if his neighbors hate him, because these guys play some mean horn ... all day and night. He said that they love it, and the walls and your t.v. and grandkids playing all muffle it out - plus it's only for like three months. I kind of thought there would be way more swans, after reading that last year there were almost four thousand there in January. Jim then explained for me (and for you, below), that all those dark ducks weren't ducks at all (save for a few random mallards) - they were cygnets! Baby swans! They'll be all white and huge by June! Oh, man ... I was just loving it ...

... but I also could no longer feel my face. I really could have sat and listened to the swan stories and watched them try to land in between the ice bergs, but I honestly might have lost my nose for real if I'd stayed out there even just a few more minutes. Invigorating! Jim walked and talked me back to the car again, giving me his business card. Turns out he's a professional wildlife control guy, so you call him if a wild animal needs to get caught and removed. His email name is "Ol Trapper 1". Perfect. 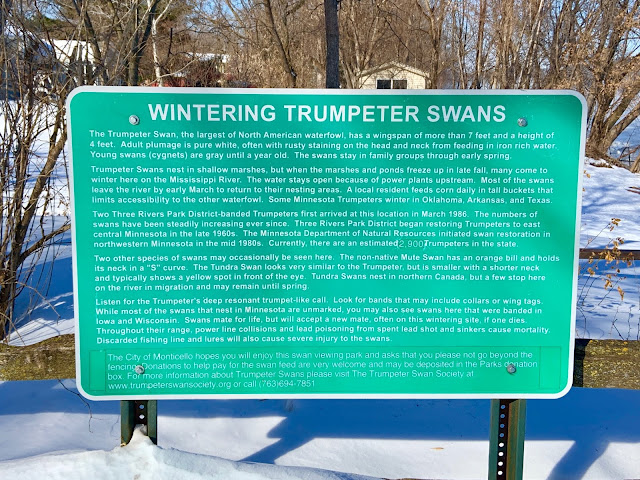 I shook Jim's hand (I think - I couldn't really feel it), said my farewell, and sat on the car's heated seat to try and regain some feeling before I began to drive. I looked at my Mom, and my eyes were glistening, from the cold, yes, but also because I was so touched, and still am as I write this. Here is this man living out his wife's legacy in her absence, missing her terribly, but she is so clearly there with him. He told me that the year Sheila passed away, there was no snow that winter, and thus very few swans, making her absence loom even larger. The next year there was a lot of snow, and a lot of swans. Jim knows that Sheila sent it, no question. He waved again as we pulled away, and we drove off feeling like we had just read a really beautiful love story ... and learned an awful lot about trumpeter swans while we were at it. (It turns out, according to Jim, that they mate for REPRODUCTIVE life, but if something happens to their partner, they will hook up again. Jim calls this Swan Park of his the "Pick Up Bar", because that's really what all of those trumpet peals are for.) 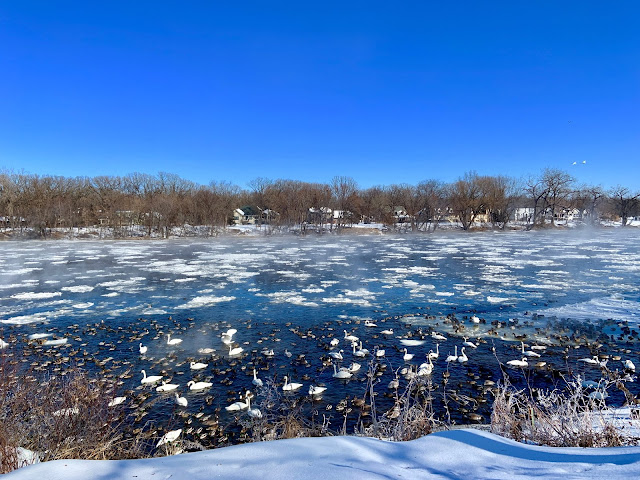 So, this Valentine's Day, let's celebrate love - whether we have it in our own lives in a romantic way or not - because it really is the one thing this world could sure use a whole lot more of right now. This beautiful, freezing cold morning could not have warmed my heart more, and I thank Jim Lawrence for sharing his great stories and for continuing his Swan Lady's dream long after she's been gone. Monticello has swans on its street light banners. The iron work on its overpass bridges feature swans. As we were leaving, another car with a couple inside pulled up to see the swans on an arctic blast of a day ... all because of Sheila and Jim. What a beautiful thing to behold ... ! Cheers to love, and Happy Valentine's Day, wherever you are! 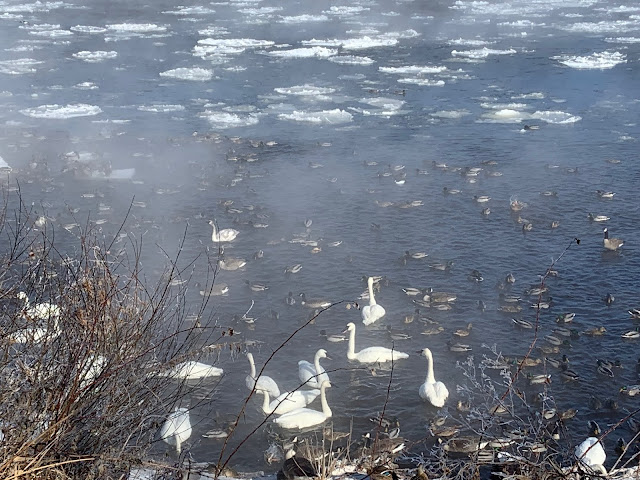 If you would like to see these swans for yourselves, just head to 117 Mississippi Drive in Monticello, MN. No financial support comes from any city or state agencies to help feed the swans, so donations are always most welcome.