I finally got to attend my first Hendrickson Foundation Hockey Festival last weekend, and WOW. Some events have an extra dash of magic dust over them, and this one certainly sparkled with it the entire time. Founded by Larry Hendrickson (the late father of my family of dearest friends), the Hendrickson Foundation was created to support hockey players with disabilities, and to get them back out on the ice. Minnesota Wild Sled (Adult and Youth) Hockey, Special Hockey, Blind Hockey, and the Minnesota Warriors (hockey for disabled veterans) are the hockey programs now supported by the HF, with 54 teams and 1,000 players from 11 states and two countries (so far!) all there to compete in the Festival tournament this weekend. Though Larry is no longer physically with us, his spirit was deeply felt, and I know he was there. 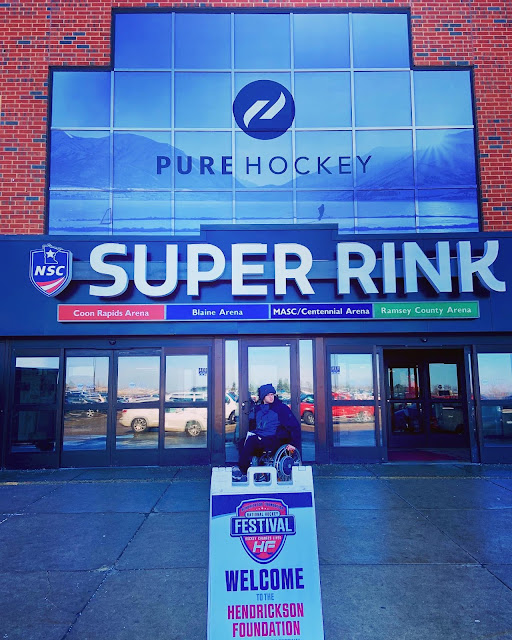 You could tell this event was something special from the moment you walked through the parking lot at the Super Rink in Blaine, Minnesota. Yes, there were a lot of wheelchairs and people that needed assistance with their mobility, but you very quickly forgot about that and focused on the wide smiles on all of the faces. Parents supporting their kids, kids supporting their parents, delighted friends and family cheering on their teams, knowing that each goal scored was so much more than a point ... it was a celebration of bravery, determination, strength, and the pure joy that comes with any goal scored in hockey - only much more so because you knew what it took to get it. I had chills the entire weekend (and not because it was cold, the whole weekend was weirdly in the 40's!). 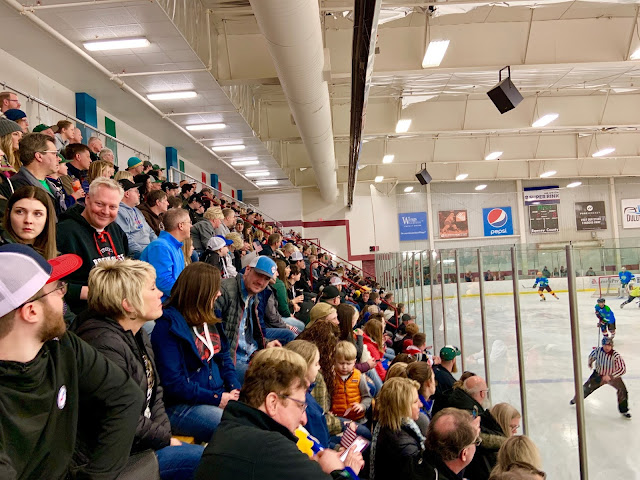 It takes an absolute village to put on a massive FREE event like this, and an army of volunteers made the whole operation run smoothly and happily. I was kind of a floater volunteer, doing whatever was needed in any moment, so I got to see a lot of the action. 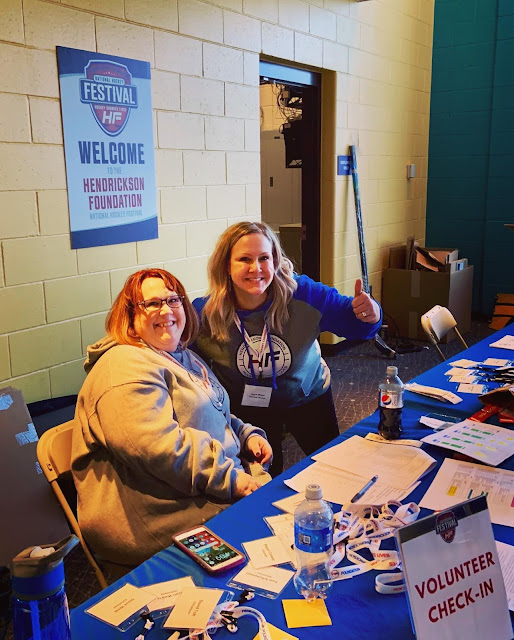 The Blind Hockey was especially cool to watch, as the players use a larger puck that makes noise, making it possible to follow. The goalies are totally blind (!) and positions are given by sight, like the forwards are able to see a little bit, the defense less. Just getting on skates on ice at all when you're blind is great enough (remember Ice Castles!?!), but these teams were scoring! You really wouldn't know that anyone was blind aside from the special puck, but you could sure tell how happy they were when that puck went into the net! More chills. 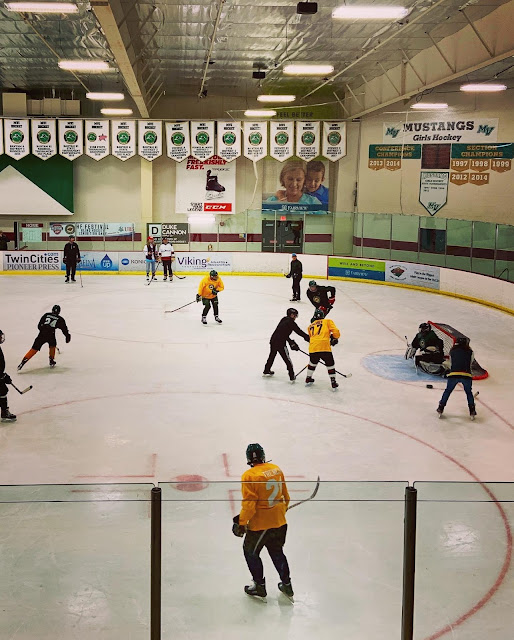 The merch table was a busy headquarters all weekend (conveniently located next to the bar), with throngs of hockey fans lining up to get the shirts, hats, blankets, etc... that showed off that you had been at this special weekend. 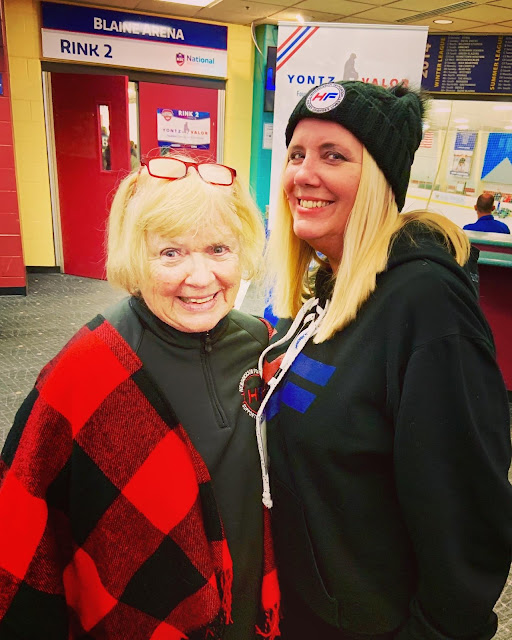 My bestie, Christine Hendrickson Krsnik, was not able to attend this year (so bummed!) because she was home recovering from a ruptured Achilles (!) injury, but her daughters and husband were representing her well, manning and womanning all of that HF merch. 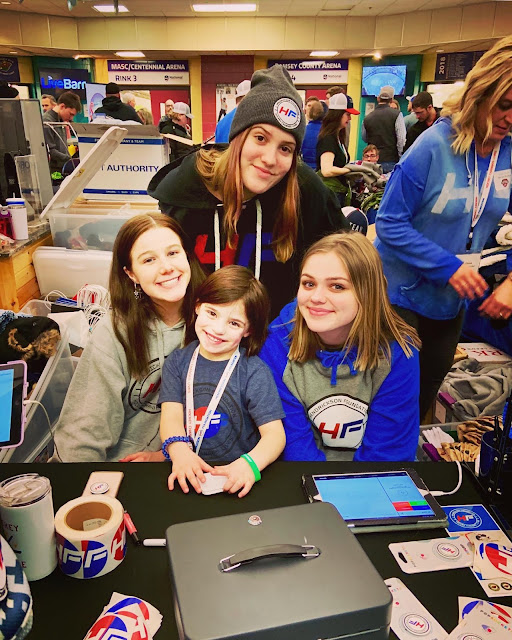 There is so much happening on so many rinks, that it's kind of hard to get to it all, but everyone packed in together for the Celebrity Game on Saturday afternoon. Minnesota hockey legends and pals came out for a friendly game, with a lot of former Wild and Gopher (and Richfield Spartans - home of the Hendys!) giving the crowd a thrill. 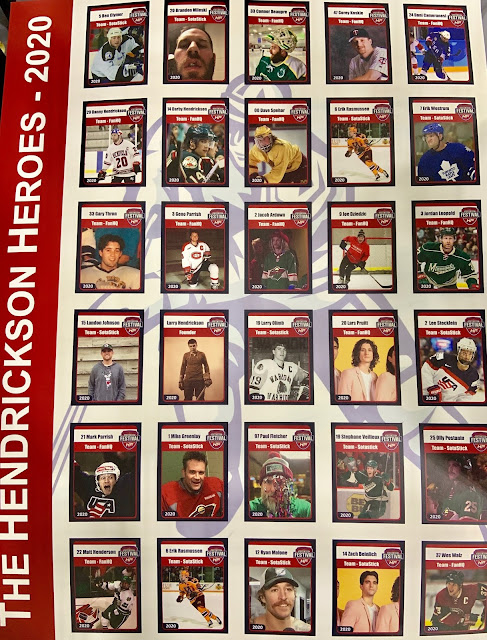 The team introductions were hilarious, and the whole game was in good fun. Christine's daughter, Jane, sang the National Anthem for the game and yep, more chills. 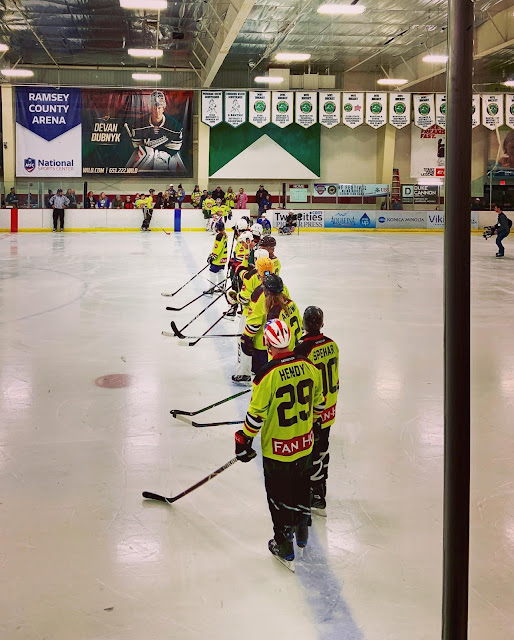 American flags had been handed out to everyone and there was a buzz going around about a special surprise (beautifully choreographed by Julie Hendrickson Oss!). There was an opening face-off to the game, and a stick was broken. The announcer called for a new stick, and out came Army Sergeant Acree, striding across the ice to deliver the stick to Wild player Matt Dumba and his sons (one a sled hockey player), after not seeing them for over two years! The place went crazy, and it was a heartwarming moment for everyone in the building. The chills just kept on coming ... ! 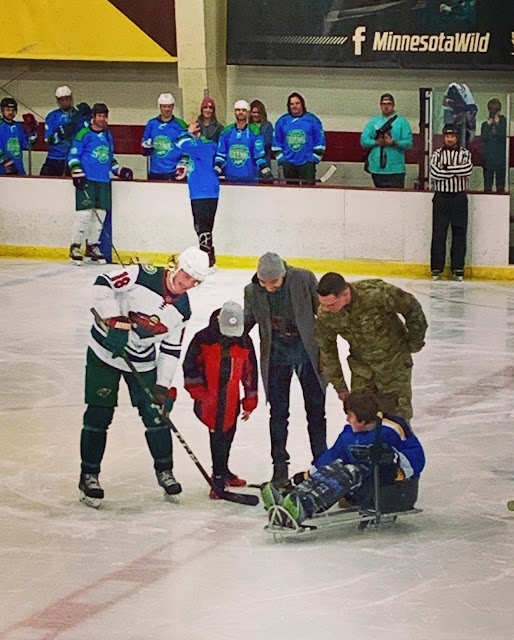 It was a high scoring Celeb game, but everyone won just be being there. It was super fun to see my old schoolmates back out on the ice, and some that I had never had the chance to see play in person before (like Mr. Assist Larry Olimb!). There were so many Hendricksons running around that Darby's jersey just said "Darby" on the back of his bright Festival jersey. Awesome. 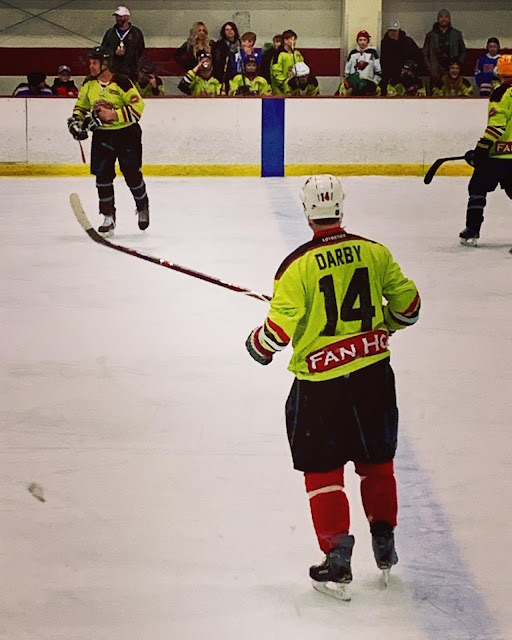 Halftime featured a Celebrity Sled Hockey game, with folks like the Wild's reporter, Audra Martin, Miss Chain of Lakes, and Sergeant Acree strapping themselves on to sleds to race down the ice. This was when you realized how really hard Sled Hockey is, after seeing all the real players make it look so easy. Several gamers could not stay upright, tipping over the moment they took off. Miss Chain of Lakes, however, was the clear champion, flying across the ice with no one even close. There were lots of cheers, but even more laughter, as I think we all got how much skill it takes, and how little these good sports had acquired thus far! Good times. 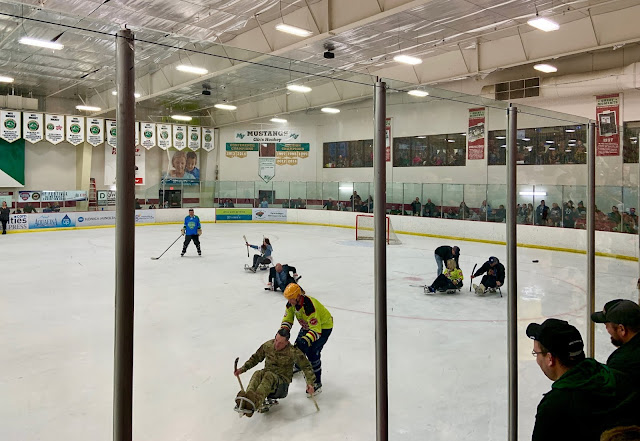 After the Celebrity Game, everyone headed over to the Banquet Hall on the same campus, where now you understood just how big this event really is. After being spread out among all of the rinks all day, now everyone was in one place, and the venue was shoulder to shoulder as participants lined up for drinks and the donated Jimmy John's grub. This was the party, and everyone was in the mood to do just that. 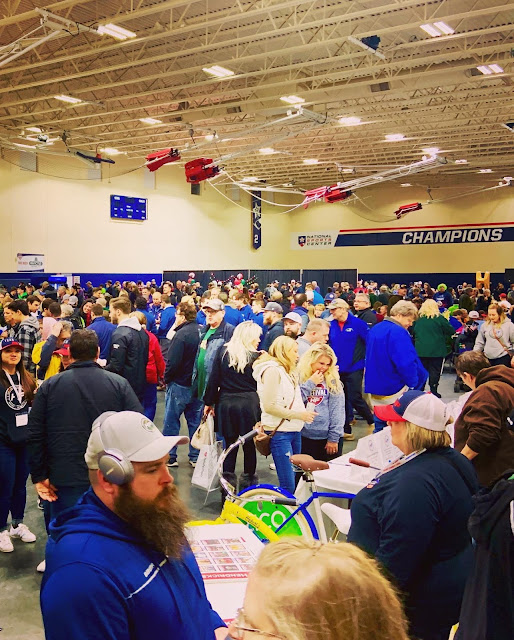 A really good silent auction kept the donations coming while the party was happening, and then it was time for the speeches and thanks. 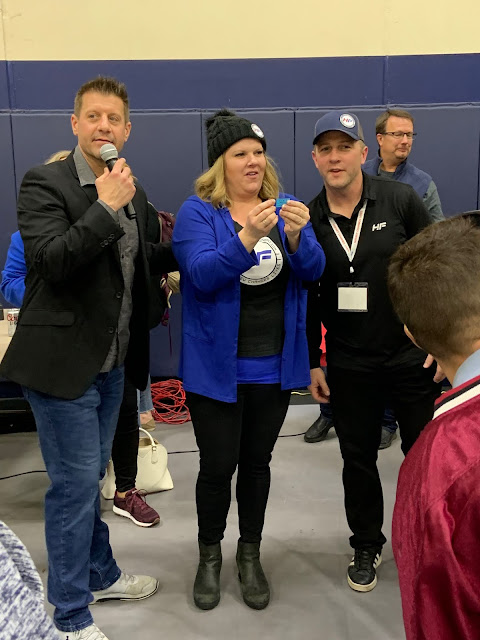 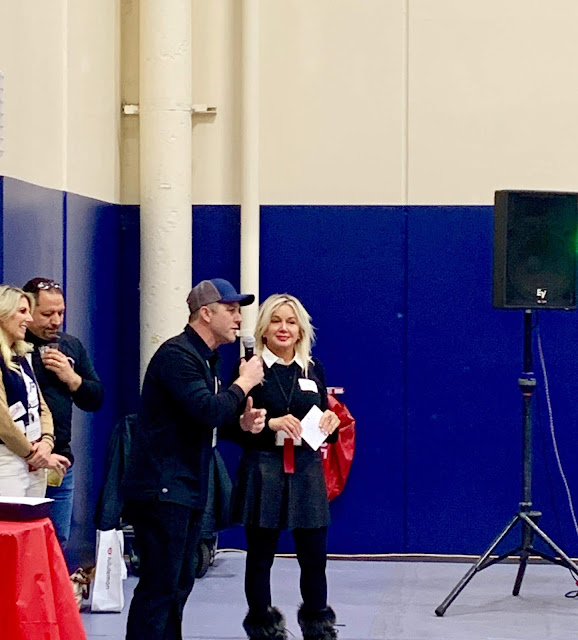 The party then really got going ... but not too hard, as the championship games still had to happen on Sunday, along with the awarding of the very cool team trophies that kind of look like golden Spartans - Right on. Again, I know there's bragging rights (and sweet trophies) to winning the tournament, but there is no way anyone left this weekend feeling like anything but an absolute victor. 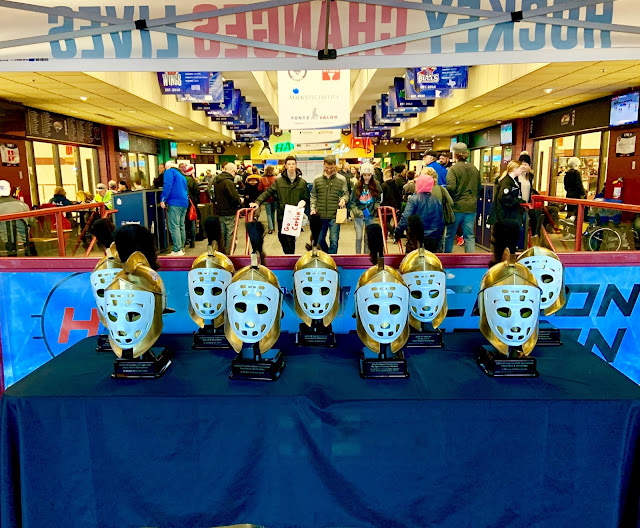 With all of the running around I was doing as a volunteer, I didn't really get a chance to hear the individual stories of the players, of which there are so many, each more touching than the last. There was one girl that took a shine to me, and every time we passed each other, she would yell, "There's my buddy!" and I felt so happy that we had made this connection, and that her happy face got even happier when she would see me. There were so many individual triumphs among the teams, and frankly, it's a huge triumph just to be there at all, whatever your abilities. The feeling that you get from helping someone else find their happiness IS the triumph, and this was happening all weekend. 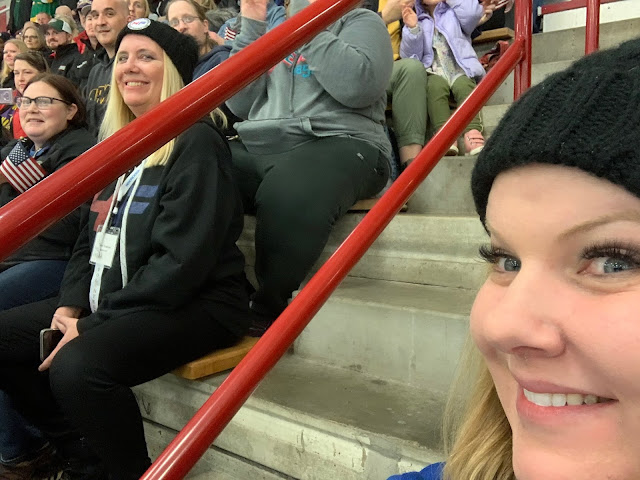 The 4th Annual Hendrickson Foundation Festival is now in the books, and I can't wait to see and share the video that is being made of the weekend, because it really is one of those things you have to experience to feel how tangible the joy really is. I feel so honored to have been able to be a little tiny part of it all, and encourage any and everyone to get involved yourselves ... because it's true - Hockey really does change lives!