Declaration - Venice To Lose Another Landmark


Most people in Venice see the big "V" Mark di Suvero sculpture nearly every day since 2001 on their trips down to the beach. Declaration has been a meeting spot at the beach ever since, as you tell visitors and friends to meet you at the big metal V, as it's the biggest, easiest thing to find. This landmark is about to be taken away, according to an article in yesterday's New York Times. 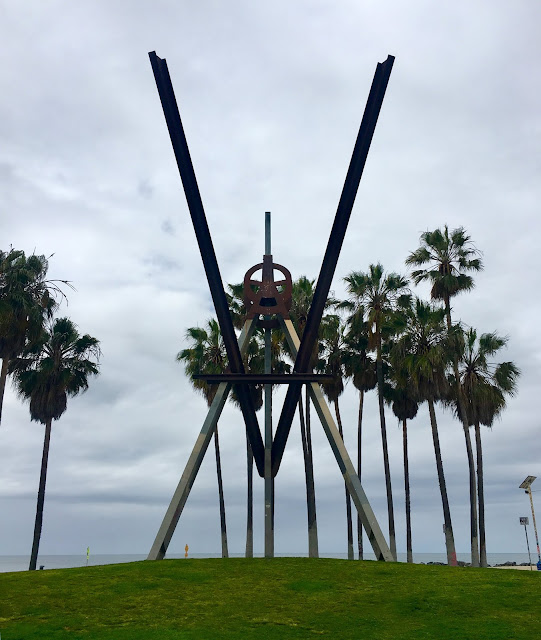 The L.A. Louver represents di Suvero, who loaned the sculpture to the city of Los Angeles, in the hopes that the city would eventually acquire it permanently. The Louver paid for its installation and upkeep, and though the sculpture is valued at six million dollars today, they have tried to work out a reasonable deal for the city, but that hasn't happened. Obviously, there are much bigger problems in Venice today than losing a sculpture, but it would definitely be sad to see it go.

Donors ponied up a billion dollars in like one day to rebuild Notre Dame, and Venice is teeming with big money these days, judging by the McMansions and BUBs everywhere. Maybe one of those people can be a hero for once, and save something in Venice instead of destroying it. Or maybe the group of concerned citizens raising money to fight bridge and affordable housing could instead do something positive with their money? Just thoughts ... and hopes.

The move of Declaration back to di Suvero's Petaluma studio is meant to happen "by the end of this year," so there seems to still be time for donors and the City of L.A. (who make a ton of money off of Venice, by the way) to step up. Mark di Suvero is 85 years old, and having a new exhibit at the Louver May 1-June 8 ... (with a celebration on June 5 honoring him and the Venice Family Clinic) what a delight it would be to let him know in person that his Venice landmark will stay ... !

It would be a shame to see yet another symbol of the art and artists in Venice go away. Man.