Failure Close Tour WIth Hometown Show At The Fonda!


The seminal 90's band, Failure, is back and closed out their tour in support of their most recent album (really 4 ep's), In The Future Your Body Will Be The Furthest Thing From Your Mind, with a fantastic hometown show April 24th at the Fonda Theater in Hollywood. They were joined by another 90's band, Swervedriver, but this night was all about Failure for us. 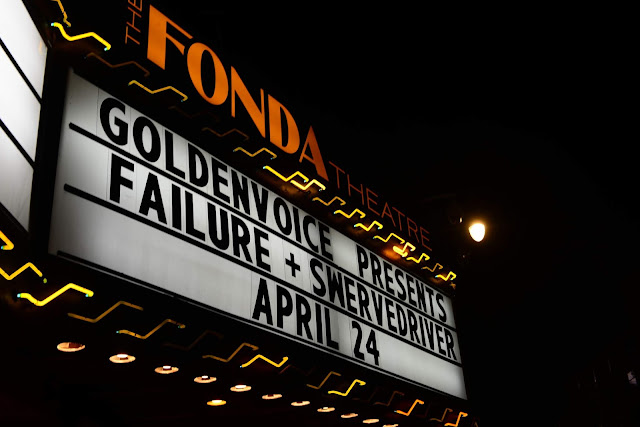 Failure is my brother Paul's favorite, and he was down front to capture the show photographically, as well as lose his mind, being extra elated to be listening to his favorite music in person and so close, as we were covering the show for our friends at Juice Magazine. Neither band was ever really my own thing, but Failure showed why they are both so underrated, so fondly remembered, and still so celebrated - at least by this heavily Generation X audience that was positively thrilled. 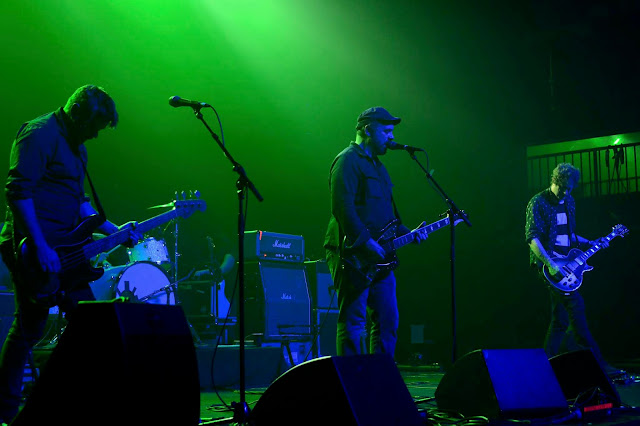 Swervedriver didn't even break a sweat (unless it was due to the heavily lit stage), and their shoes were definitely being gazed at when we arrived near the end of their set. Someone on the floor yelled out, "Welcome back!" to the Oxford, England based band, and though almost exactly zero lyrics were decipherable through their super distorted guitar pedal fuzz, people other than me seemed to know what songs they were. A guy in a Jane's Addiction shirt was next to me, and that's who I was listening to instead of these guys. I found it to be a bit of a snooze, but the majorly stoned crowd (everyone seemed to have at least a vape pen, if not a real jay) nodded along happily, so good for them! The highlight for everyone (judging from the shrieks and the extendo jam nobody seemed to mind) was "Last Train To Satansville" from their Mezcal Head album, aptly titled, as I felt like I had mezcal head listening to it. Maybe that's when you listen to Swervedriver to really get them ... will give it a shot. 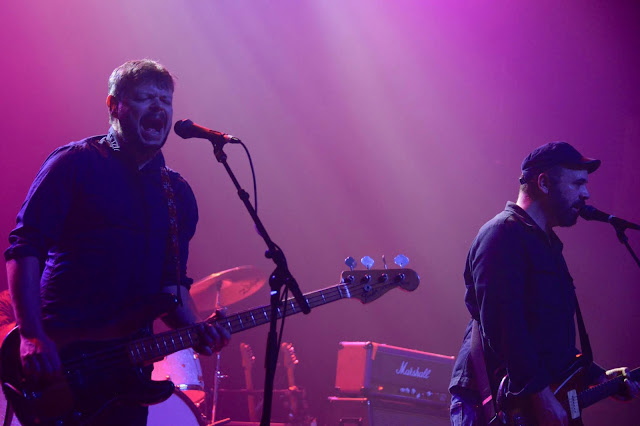 In between the sets, I sat up in the balcony waiting for Failure and observing the floor like Bran from Game Of Thrones this season. I wasn't really in the mood for mingling or partying, or even a rock show, really, but I knew how much this show meant to my brother, so I was there for it all. Old Failure heads from back in the day greeted each other by yelling across the floor with their rolled up collector posters as megaphones, and it was constant hugs and high fives down there. People were stoked. Then the house suddenly went dark, and there was Failure! Many in the house hadn't seen this band live in like 17 years, so to say they went wild when the haunting feedback intro led into "Solar Eyes" off the latest album was a major understatement. Thrilled! 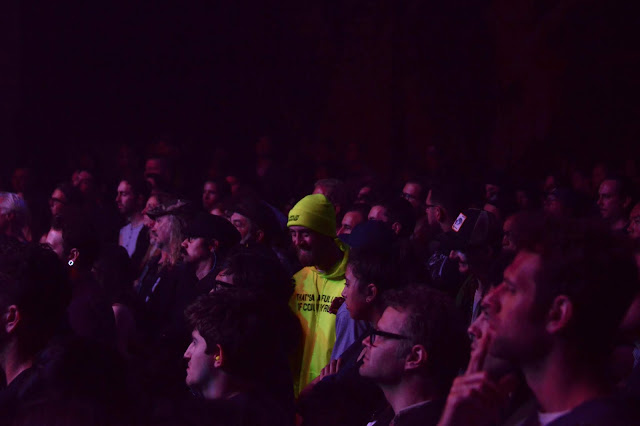 The bass was so heavy I felt it in my throat all the way up in the balcony, and I could see my brother down front shooting, and knew how stoked he was. Ken Andrews was in fine voice ... he reminds me a bit of Beck - singing, not looks. 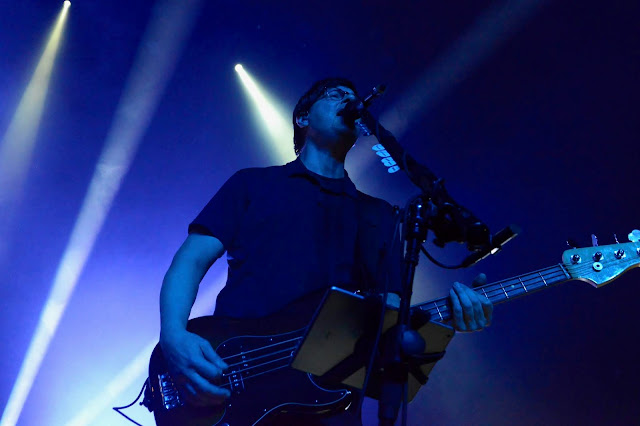 Andrews traded off guitar and bass duties with Greg Edwards, and Kellii Scott held it all down on the drums. "Distorted Fields" and "Heavy and Blind" (also off the new album, which was nice to see so many people loving and not yelling for oldies) were aptly titled, as there was hella distortion going down, the jams were heavy, and we were all nearly blind from the constant use of colored Klieg-type lights that almost never let you see the band fully (Kudos to the photographers that somehow found them in the chaos!). 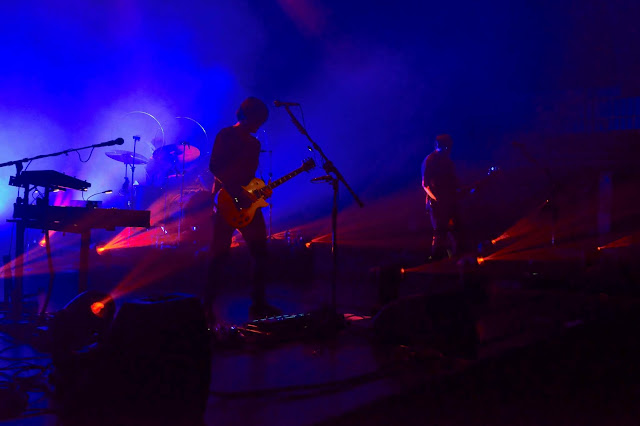 "Fine citizens of Los Angeles, will you jump in a rocket ship with us for a trip to Fantastic Land?!" said Andrews, and the crowd answered in the affirmative, gaining them a bunch of songs from Fantastic Planet - their best loved and most well-known album. "Another Space Song" and "Smoking Umbrellas" were also titled pretty on the nose for these space rockers, and the smokers in the house that loved them. Andrews addressed the crowd here, saying, "What's happening, Los Angeles?! It's so good to be home!", with his arms up in victory formation.  He went on to say that it was great to be playing at home for family and friends, and that his two kids were here to see them play - and they were right in front of me in the balcony, head banging along and going crazy for their Dad. It was awesome. "Pillowhead" got the whole place going crazy, and featured a whole lot of air-drumming from the crowd trying to keep time with Scott. 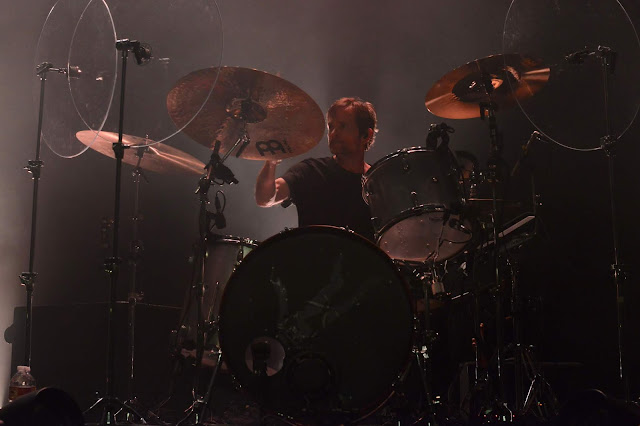 The highlight from this segment was probably their biggest hit ever, "Stuck On You", and not just because a dude stage dove off of the stage at its start. It's a melodic anthem with great lyrics (I thought I'd drop you easily/but that was not to be/You burrowed like a summer tick/so you invade my sleep/and confuse my dreams/Turn my nights to sleepless itch) that also appeared to be every couple in the room's "song", as there was much swaying and kissing down there during this one. Fantastic Land is cool. 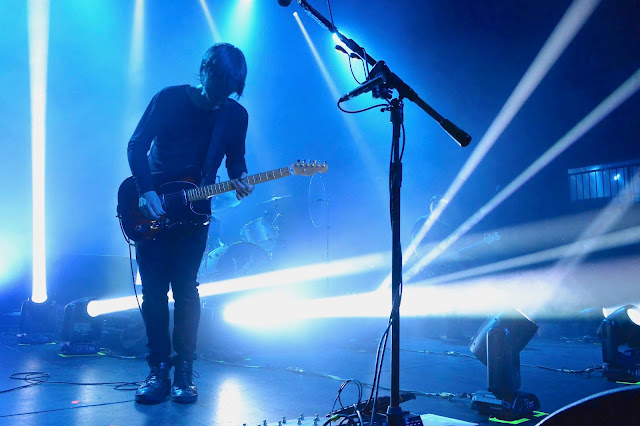 The Magnified album was featured next, and we got "Undone" and "Frogs". These were straight up ROCK, and reminded me a bit of Queens Of The Stone Age and maybe Tool, which is no surprise, considering these fellows opened for them on many a show. The Heart Is A Monster was the source material for the next jams: "A.M. Amnesia" and "Counterfeit Sky" which caused one guy (and there's always that guy) to yell out, "Fuck yeah, Failure!" - which is kind of funny to hear. Like "Hooray for failure!" would only come up if it was for this band. 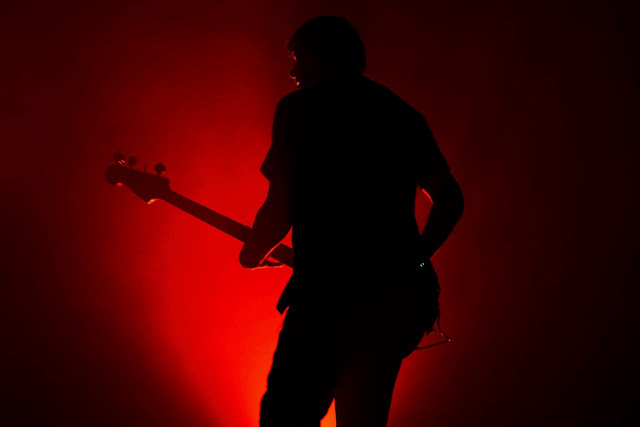 "Thanks for recognizing our new album. We love playing it on tour, thank you for supporting it!", said Andrews by way of introducing three more from ITFYBWBTFFYM, and next came "Dark Speed", "No One Left" and the magnum opus that is "The Pineal Electorate" (my brother's favorite of the night - among many). Those last two were switcheroos, as Andrews and Edwards traded vocals and instruments, and it was pretty metal. It ended with a cacophony of sound and feedback that showcased how good Failure's sound was in comparison to Swervedriver. Like, whoa. Failure is known for their sonic excellence, and they don't use any amps on the stage. They travel with their own sound guy, and play through the sound system - super technical and hard to pull off, but these guys do it with aplomb. 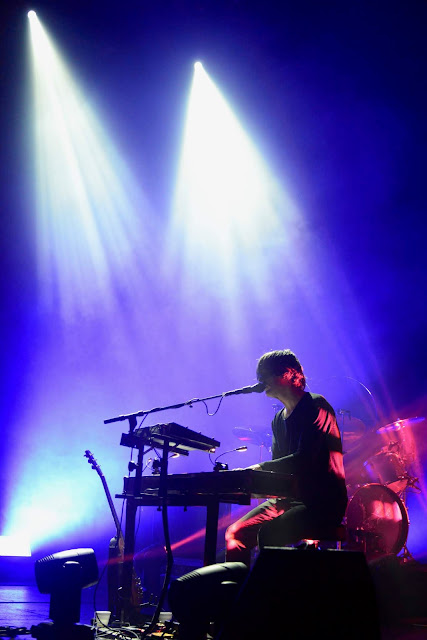 We went back to the Fantastic Planet for the last song of the main set, and Failure ripped through "Heliotropic" and its heavy rock punctuated by effective lighting cues. It was a jammer, and the guys in the crowd loved it, especially when Andrews was tossing out picks at its end, before leaving the stage for the obligatory encore pause. After a bunch of yelling and cheers, the band came back out for a bit of audience participation on "The Nurse Who Loved Me" - a much loved and covered tune also from Fantastic Planet (the one I'd get as a primer to Failure along with the latest). They took us back to their first album for the final two numbers, and we learned that Comfort was recorded in 1991 in Minnesota (our home state!) with producer, Steve Albini. Paul's favorite band was recording right in town and he didn't even know it! Now he likes them even more. "Macaque" and "Screen Man" made the entire room - including Andrews' kids - head bang even harder than before, both because they fully rocked, but also because it was the last show of this tour - and the way things go, you never know if there will be another live moment with your favorite band. 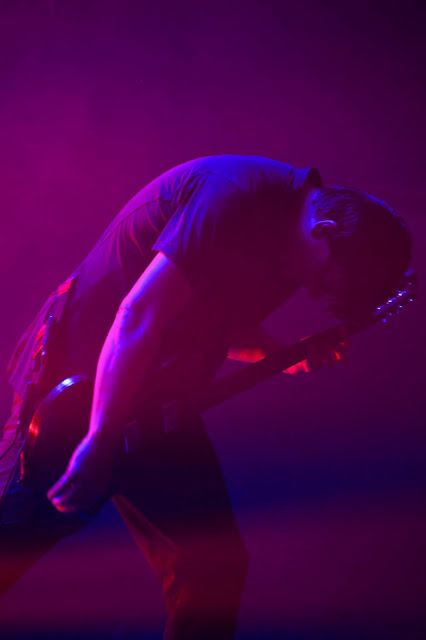 And if you've never seen an older band live before (like me with these guys), you gotta go see them when you can, because they might turn into your favorite band - even if you're late to the party. I'd like to thank Failure for greatly improving my mood, and reminding of the power of music to heal, uplift, and to unite. The crowd didn't want to let the band go (because they wanted more, but also because they kept throwing their stuff into the crowd!), and the lines for merch were long - again probably because you never know. But in this case, yes, it was a bit of time travel back to the 90's ... but it's most likely also a glimpse into the future, as these guys are at the very top of their game - and should now maybe consider a name change to Success.

*All photos by Paul Gronner Photography