Longtime friends Shooter Jennings and Duff McKagan have teamed up on the forthcoming (May 31st!) solo album from McKagan, Tenderness, and they spoke about their collaboration last Thursday night at The Grammy Museum's Clive Davis Theater. Grammy Director, Scott Goldman, introduced Jennings by saying that he's collaborated with everyone from George Jones to Marilyn Manson (and recently won his first Grammy for producing Brandi Carlile's By The Way, I Forgive You!), and that tells you the huge range that you're dealing with, and that makes sense of how a member of Outlaw Country royalty would come together to work with McKagan, one of the founding members of the monsters of hard rock, Guns N' Roses. 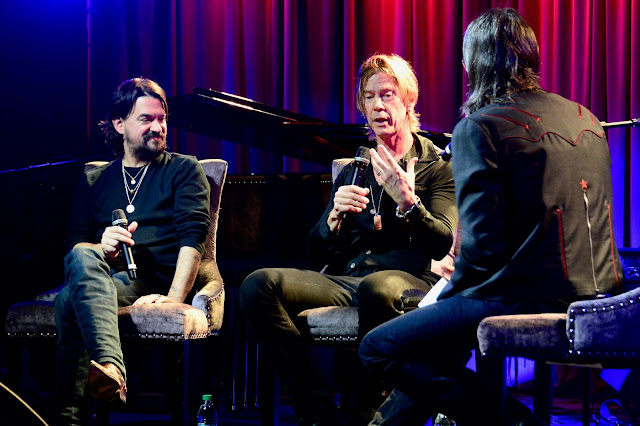 Jennings and McKagan took the stage to much applause, and settled in for a chat about the new album, and their process in making it. These partners met back in 2001, when Jennings was in his band Stargunn (which is also around when I became friends with Jennings!). Jennings was much more metal back then, and said that he came to L.A. because of GNR, and the first CD's he ever bought were GNR. "That 'Welcome To The Jungle' video with Axl getting off the bus in L.A. - that was me!" It was rumored around town back then that he might even take over for Axl Rose in GNR at one point - he had the good hair AND the pants. Though that never happened, a friendship was born between Jennings and McKagan, because as McKagan put it, "I saw in his eyes that he was a truth teller." 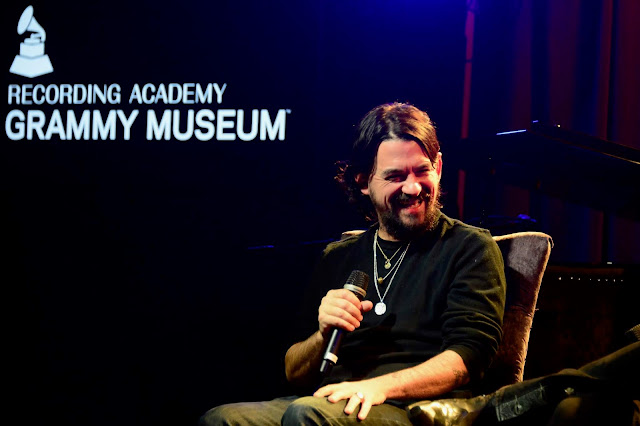 As both musicians struck out on their own, McKagan was particularly struck by Jennings' Black Ribbons album (my favorite too - a conceptual masterpiece in my opinion), and had him in mind to work with when coming up with the songs that would become Tenderness. McKagan is also a writer, with books and columns, and refers to himself as an "Armchair Historian". He likes to visit tourist spots, like Monticello, and World War I museums, and is constantly out there meeting and talking with people, and said that when you turn off the news and really talk to people, there just isn't that divide that all of the media talks about. Like after 9/11 - everyone came together to help, it didn't matter what "side" you were on. We were in it together - as we are now and always have been. "Like, I've seen women in full head coverings rocking the fuck out!" Rad. 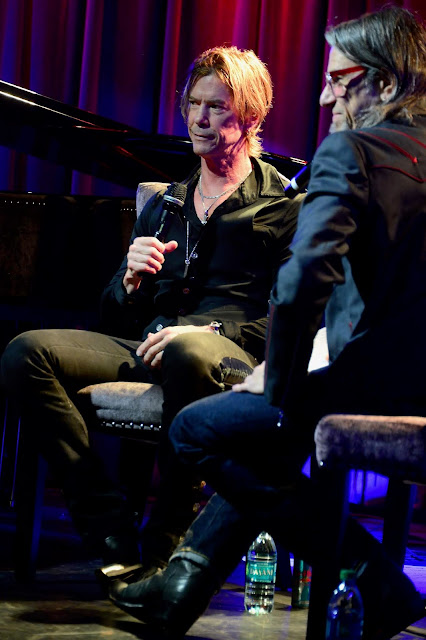 Inspiration for the new album came to McKagan from artists like Mark Lanegan ("The River Rise") and Greg Dulli ("Deepest Shade" - "that romances the shit out of my musical mind!" - D.M.), and Jennings understood that vibe immediately, and cited Failure's "Stuck On You" as his own touchpoint. Goldman blew smoke at Jennings by asking McKagan, "Was it intimidating to be working with such a dauntingly talented multi-instrumentalist as Shooter?" to which Jennings said, "I'm gonna leave." People talk about humble musicians, but Jennings is the REAL deal - and an awesome dude to boot (which makes sense why these two get along. McKagan seems super thoughtful and aware and kind too). To answer the question, McKagan said he addresses it in the booklet he wrote included with the album ... saying, "Shooter was a few steps ahead always, but didn't make you feel that way." He echoed Brandi Carlile's sentiment, that working with Shooter is "like being two kids in the basement making a rocketship!" After juggling touring and kid schedules, these true partners got down to it. McKagan also used Jennings' band for the project, and told about seeing them play The Troubadour last fall, and hanging over the balcony going, "That's my band!" all excited, because they're THAT good. 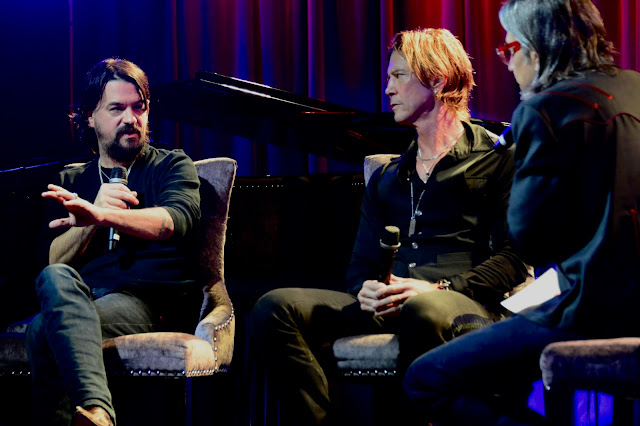 Several of the songs from Tenderness touch on issues we're all dealing with these days: addiction, gun control, suicide ... though McKagan is reluctant to pontificate on these things, and doesn't want to be yet another political voice, saying, "Oh, you should think this way .. Fuck me." Using the track "Parkland" as an example, he said it came to him as a B flat/D funeral dirge sound, and he name-checks sites of these mass shooting tragedies ... "And if that's political, you can fuck off." That got rousing applause - because Duh. 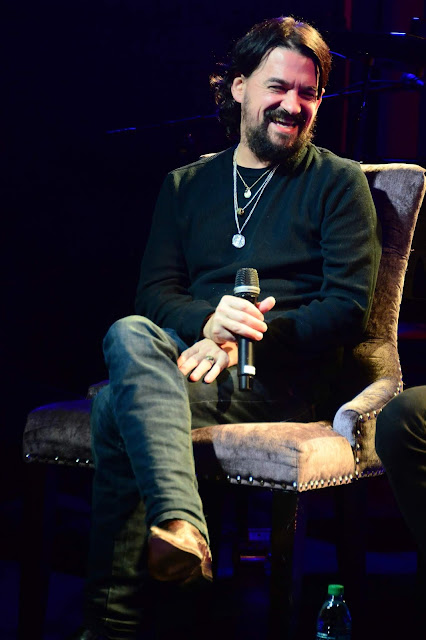 McKagan also addressed the issue of addiction, having lost many friends to it over the years. He credited his wife, Susan, several times with saving his own life, and it was refreshing to hear a dude gush over his longtime marriage, calling it "badass and cool". "Being strung out isn't a 'them', it's a "we", McKagan stated, and went on to talk about how losing so many inspired his song, "You're Still Here". Scott Weiland had died, whom McKagan tried to help many times. Then Prince. "My thing is Prince. 1999 saved my life, and got me out of heroin-infested Seattle to L.A." (I knew I liked him). He heard about that tragic death while on tour in Mexico City and was gutted. Then Chris Cornell (whose daughter Lily is two weeks apart from McKagan's daughter). The night Cornell died, Axl Rose had come to GNR and said, "Let's try 'Black Hole Sun' tonight" - which they had never played. McKagan got a text after the show that Cornell had died. Heavy. Then Chester Bennington. It's all so sad, but McKagan made it a little better, saying, "We're gonna remember you. You're still here." Having come out the other side himself, McKagan said, "The celebration is that I get to work with Shooter now, and do something also badass and cool." 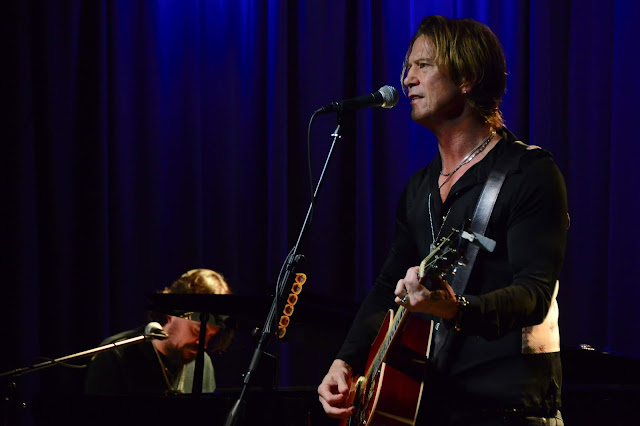 Jennings and McKagan are readers, and talked about authors and their lyrical influence. McKagan is big on Cormac McCarthy and Hemingway, and their scarcity of words. "They can make me cry over a single sentence. I tried to write to standards of authors that I read. Like, do NOT rhyme 'fire' with 'desire'. Do not fucking do that!" Jennings added about making the album, "We were just chasing a sound. We had a center - which was us - and no boundaries." McKagan was about to add to that, then stopped himself, saying, "You realize this is the most we've ever talked about this. Now we're just making stuff up!"

Goldman publicly thanked McKagan for all of his work on behalf of MusiCares, helping other musicians because he's been there himself. "Being an alcoholic junkie is not part of the rock star dream, and now I have sobriety and a lust for life." He also talked about doing a book of "all the shit I don't remember, like interviewing friends saying, 'What did I do in Louisville?", which cracked people up. Listening to these guys talk together, you realize they're both just regular cool dudes, who also happen to be insanely talented legends that we were lucky to see in such an intimate setting ... and then it was time for them to play! 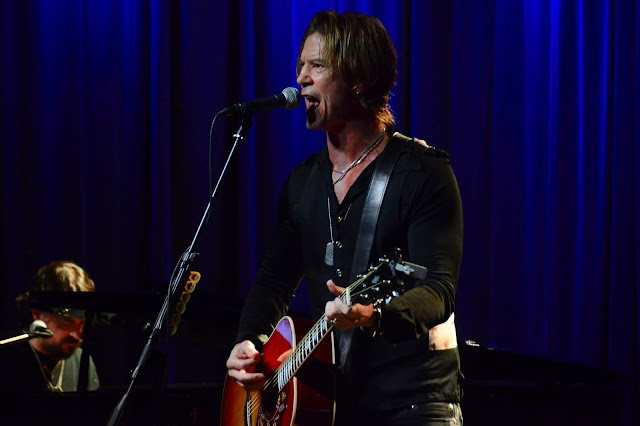 Joined by violinist, Aubrey Richmond, Jennings sat down at the piano, and McKagan strapped on a guitar. They opened with the title track "Tenderness" and its beautiful piano intro. It's really a song about empathy, and how badly needed that trait is today. Up next was "Chip Away" (which reminded me that McKagan was briefly in Jane's Addiction too!), an upbeat number that featured a fiddle solo and the notion of hanging in there until all of this mess in our country is through - or that's how I took it, anyway. 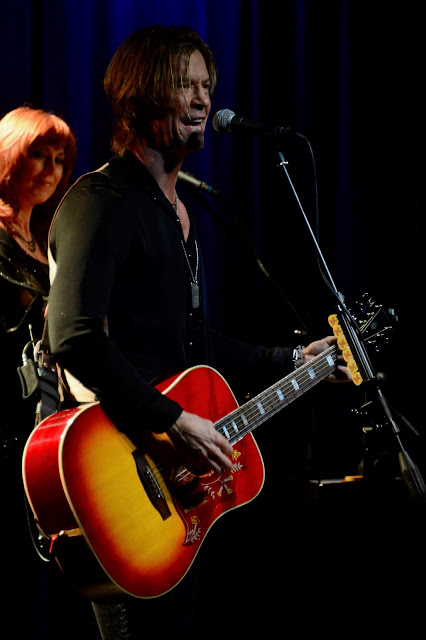 The short set ended with the one about all of the lost souls, "You're Still Here". It is slow, and there is a funeral air about it, but it's beautiful. The line, "You're still here ... when the lights go down, you are still here ... all you hold dear remains" proved that McKagan attained what he was aiming for. I cried over one sentence. The last notes rung out and McKagan shouted, "We'll see you on the road!" and they sure will. Because their show will be the one where you feel no division in this country, at least for a few hours.  Shooter and Duff ... Thank you for the Tenderness!