When the ladies of Rebelle Road invite you to something, you jump at the chance because you know it's going to be a rip-roaring good time! That was certainly the case last night, when they threw a house concert at the beautiful Dunlap home on Rose Avenue, featuring the California Country of the legendary Rosie Flores! 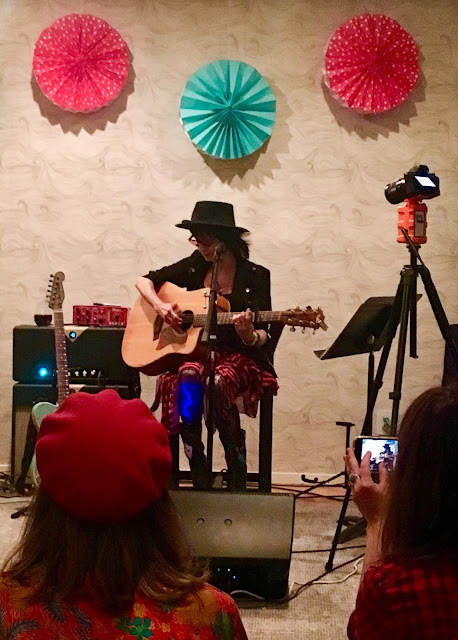 Flores herself answered the door for me, asking, "What's the password?" I answered without hesitation, "I'm here to see the incomparable Rose fucking Flores!" (as the invite had stated). Well, that got me in, AND a hug ... and this night was ON.

Friends and fans mingled around in the kitchen - as you do - snacking and drinking and catching up before Rebelles Adrienne Isom and KP Hawthorn introduced the truly incomparable Ms. Flores. Fresh from the SXSW Rebelle Road showcase in Austin, Flores was back in California to play and promote her album, Simple Case Of The Blues - and we were lucky to bear witness. In a living room! 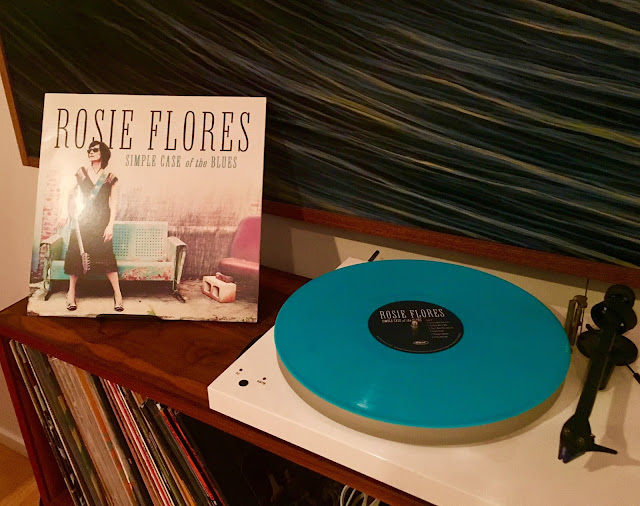 Flores kicked off her first set with her great tune, "Bandera Highway", which she said took her from age 16-42 to complete. This was played solo acoustic, and the silent reverence from the loud room that occurred the moment Flores started playing was testimonial to the respect Flores commands. She's something else.

Flores is a wonderful storyteller with her guitar skills putting the exclamation point on all of her musical tales. Obviously very close to her late father, Flores told of how he bought all of the equipment for her first all girl band in Texas, Penelope's Children. An audience member commented, "He believed in you", and Flores showed us all just exactly that talent that her Dad had seen in her, multiplied by years of playing, touring, and becoming the icon that she now is. Flores played her tribute song to her Father, "Who's Gonna Fix It Now?", and though she had given us a Kleenex tear drop warning ... several of us were still a mess at song's end, when she sings, "I guess I"ll fix it now". She shared that when she was writing the lyrics for that song, a candle in the room would flicker every time she sang the title question. Her Dad knew. The room got blurry there for a minute ... phew! 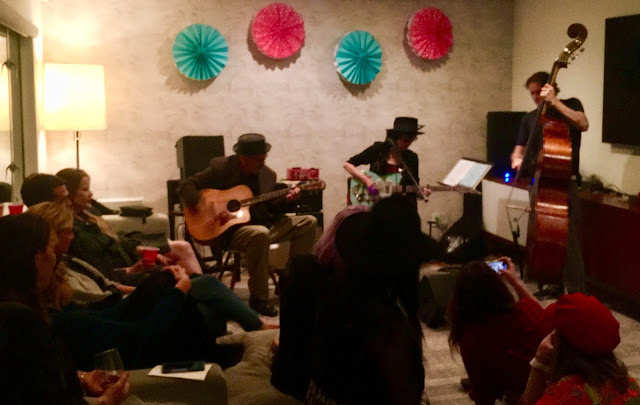 Flores made her name big with Rosie Flores and The Screaming Sirens, and has always been a champion of female artists, as well as a glorious inspiration. This makes her a perfect member of the Rebelle Road family - who are dedicated to booking and producing more female artists. In fact, there was a bit of a meeting of our female minds last night, and a shot across the bow to music media and bookers is forthcoming ... just you wait. "Thank you, Rebelle Road, for appreciating what I do," said Flores humbly ... and kindly downplaying our superfandom yells and whistles.

The Palomino Nightclub in the Valley was the headquarters of California country, and where I first saw Flores play at their reunion celebration last year. That's when I really understood how much this fierce woman means to the California Country scene, and that she is seen as its undisputed Queen. Like, seeing her in a living room is a big deal, and we knew it. When she played her "Palomino Days", the room erupted in cheers just about as loud as that monumental show last fall ... Sorry, Neighbors! 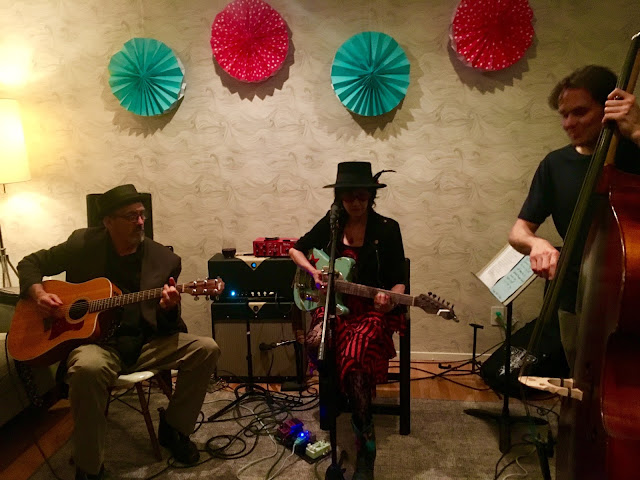 There was a "Hound Dog" cover, and then we got "Boxcars" from the great Flores album Rockabilly Filly. The whole room was tapping its feet along in a group percussion effort , and the extra-skilled guitar solo earned more raucous applause. Then it was time for more red wine.

Everyone mixed and mingled by the bonfire outside, then it became more of a real hootenanny, with the musical stylings of Rebelle Road co-founder KP Hawthorn's beautiful voice mingling with the perfect Southern California nightsongs outside. Alice Wallace showed off her yodeling skills, and then Flores returned, allowing some talented gentlemen to join the ladies. Fantastic fiddler, Xander Hitzig had a fiddle/guitar battle with Flores that was so fiery, it prompted Flores to say, "He's so cute I want to put him in my suitcase!"  Blues guitarist Jeff Ross and co-host of the night, Danny Dunlap (along with the lovely Danielle) next came up to play alongside Flores on his standup bass. People were up and dancing, carrying on like it wasn't a weeknight, having a total ball. 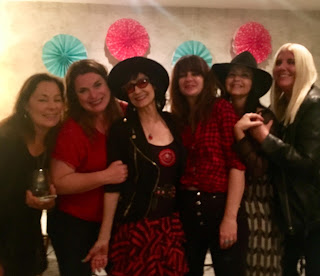 The living room honkytonk had to end sometime, and as we exchanged hugs and thanks before stepping back out into the night, KP Hawthorn said, "I wish every Tuesday was like this!" I could only answer, "Or ANY night!" - as this truly was one for the memories.

Thank you to everyone for a complete blast, and stay tuned for more fun from Rebelle Road!