The new album Black Ribbons by Shooter Jennings, and his new band Hierophant, is nothing short of jaw-dropping. It's a good old-fashioned "Concept" album, complete with between track narration by Stephen King, here playing the part of radio D.J. "Will O' The Wisp", on the last hour of free speech airwaves before they're taken over by the government.

Truth be told, I was impressed before I even played one track on the album. The packaging (beautifully executed by Sonny Kay) is super cool, original and heavy ... just like the disc inside. The American flag with its stripes turned into black ribbons - Whoa. Black crows and black ribbons tied around trees let you know that you're about to dig into something of weight. Then the bright orange disc itself printed with "Killing for peace is like fucking for chastity", instead of any title or name. So honestly, Shooter had me from hello on this one, but let's dig deeper together, because it deserves it.

From the opening track, "Wake Up!" and its throw-down of Atari-like electronica beats just moments into it, you know this isn't what some of Shooter's more country-style fans might have been expecting. Tough. I actually got into a little Facebook fisticuff with some of those fans that want Shooter to shut up and play his Dad's songs (if you don't know, Shooter is the son of Outlaw Country legends Waylon Jennings and Jessi Colter). Basically, "What happened, Shooter?! Put the O back in Country!" - Them. "Artists are expressing their own visions, not yours. Go Shooter!" - Me. Having said that, it doesn't even matter what musical taste you have, as this album has it all ... Hard rock, ballad, country, electronica, punk rock ... It's a clear reflection of the multitude of influences someone growing up in the 80's that loves all kinds of music would have, and want to explore.

A gang of us from Venice went downtown the other night to the Grammy Museum to hear Shooter and his producer, Dave Cobb, discuss the making of Black Ribbons in the intimate and casual setting of the Grammy Sound Stage. In the program for the event, Shooter is quoted as saying, "I knew I didn't have just a record on my hands, I had a mission." That is absolutely clear, especially when you hear the dialogue from Mr. King/Will O' The Wisp (that was written back and forth between King and Shooter, who have still never met!). It's heavy, honest, quasi-anarchist stuff - all of which I whole-heartedly endorse. Government, Corporations, War Mongers, Media, Posers, Consumer Culture ... Shooter is on to you. And calls you all out, as you should be. ("They'll try to turn me against you, so that divided we'll turn to them" - Wake Up! "They create a problem so they can provide a solution ... there are guns instead of roses" - The Breaking Point. And that's just for starters.)

Shooter explained during the Grammy talk that he was going through a lot of personal reflection in the time leading up to this album. Having had his first child, Alabama, born to him and his lady ("High Priestess"), Drea De Matteo, and feeling like the world was falling apart as he drove their RV across the country, listening to radio DJ Art Bell trip him out, and the one Blue Oyster Cult c.d. they had along with them ("He definitely didn't fear the reaper" - Dave Cobb). As bad as things were getting in society at large, Shooter himself was feeling lucky for his own blessings, and the album was spawned out of that - and a need to get out all of these musings boiling over inside of himself. 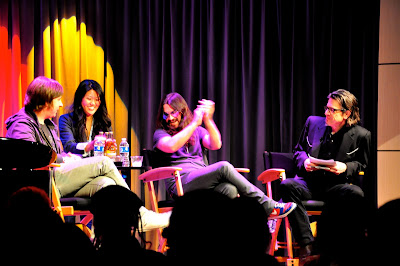 Scott Goldman (VP of MusicCares and the Grammy Foundation) did a pretty good job of keeping Shooter ("I feel like Cosmo Kramer on The Actor's Studio") and Dave on course, but the beers soon delivered, and their obvious respect and sense of comfort with each other kept the evening fun and informal, while lending insight into to the process behind the making of such an ambitious project. Both Shooter and Dave are extra tech-savvy, so the conversation often went more down the path of the how's and why's of achieving different sounds with Analog, Pro-Tools, etc ... (to the point where Dave stopped himself in the middle of it all by saying, "Dork! Dork!") vs. getting into the meaty lyrics (I'd love to have seen a lyric sheet included in the disc package, as they pack a strong wallop) and between-song truth telling. There really may need to be a Grammy Museum talk sequel on this one ... 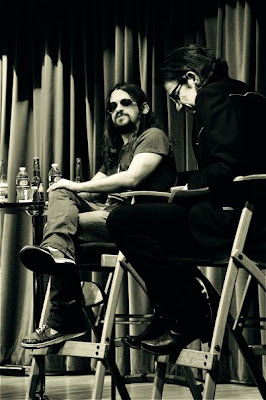 Shooter had the song, "Black Ribbons" to begin with (I first heard it on The Justice Tour that Shooter's friend, Tom Morello, asked him to join. He played it before a group from Iraq Veterans Against The War, and from that moment I thought it should be their theme song. With its chorus about "Man down, tie a ribbon 'round my soul ..." - the album version even ends with the sound of marching soldier boots - it couldn't be more apt for them). He began to define the vision to Dave Cobb, who Shooter said "Will get excited about any song idea I have, even if it's about a singing monkey". To which Dave responded, "All of his records are just Shooter being honest. An idea might be crazy, but it's crazy honest." And they were off. 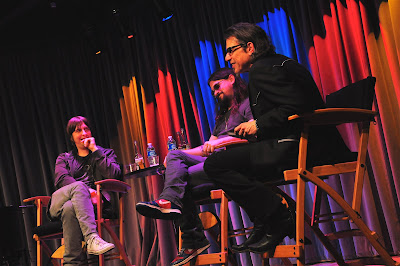 Though it was a deeply personal journey for Shooter, this album was also a blast to make, it sounds like. They'd drink and play and experiment and have fun, but all the while they were creating something epic and BIG. Big like you can't help but think of Pink Floyd (especially David Gilmour) while listening. The main cheerleaders and support system for Shooter during the recording process were Drea (who came up with a slew of the album's ideas) and his friend, Danny Coakley. Shooter said one night they thought they'd re-invented music and created the new "Stairway To Heaven" - only to have Danny come in and just squirm and shake his head while listening. As Shooter put it, "It sounded like Yes (the band), but Danny let us know it sounded like No." Crack up. 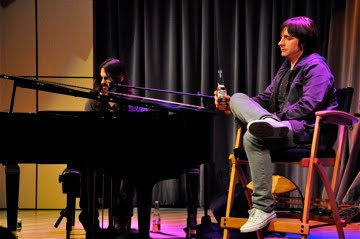 My favorite track on the album - it's huge and beautiful and classic - is "All Of This Could Have Been Yours". Shooter played it on the Grammy Museum's grand piano, and it gave me goosebumps - again. He explained how Black Ribbons is a piano record, and he'd write lyrics on his Blackberry, propped up on the piano. He'd have to stop and roll the little ball to keep going, and then he'd pass it on to Dave, who "can spot what's good about an idea and get where I'm coming from, which is invaluable." 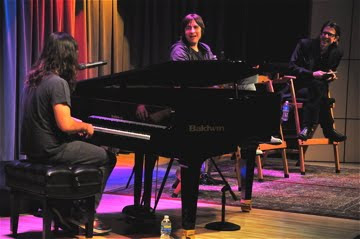 Shooter was also inspired by a book from the 70's called The Hero Within by Carol S. Pearson. In it, she talks about the six archetypes we all live by: Innocent, Martyr, Warrior, Magician, Orphan and Wanderer, and how they change as different phases of our lives take center stage. Each Black Ribbons disc contains one of the six archetype cards (I got Warrior), and each song - musically and lyrically - does too. As I mentioned before, each song is different from the next. "Fuck You, I'm Famous" is a punk-ish party jam; "God Bless Alabama" is a little bit country, a little bit rock-and-roll; "Summer of Rage" has synth, horns, xylophone, choir, you name it; "Lights In The Sky" even has Autotunes on it (which I cannot stand, personally. It's a trend, and a lame one at that. It jolts me out of whatever I'm hearing, and to me is like Shooter taking the stage wearing orange Croc's - but that is the only quibble I have with the entire production)! I would suggest you listen to the album straight through, in its entirety - maybe on your own RV road trip - to feel its whole impact, and to recognize the enormity of its parts.

I deeply respect and admire anyone who stretches themselves out of the box they were born into, and Shooter has certainly done that with this grand in every way album. Upon multiple listenings, each time I am reminded of the famous Che Guevara quote, "A true revolutionary is guided by great feelings of love." I don't think it's hyperbole to say that Black Ribbons is a revolutionary album - full of deep and important musings about the state of our world today, from someone who some may have thought an unlikely source. Revolutionary in thought, but also in his uprising against expectations placed on him. All of that aside - though it really can't be placed aside - the dominant feeling I'm left with after each listen is a true sense of love. Shooter's love for music, his family and friends, his country, and that feeling of, as Stephen King puts it, "Put all ten middle fingers in the air and dance, my Brothers and Sisters!" 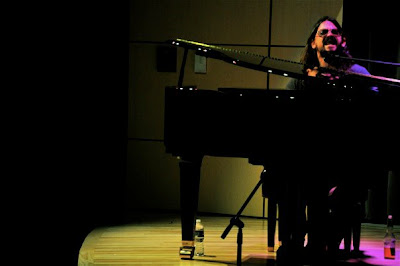 Love and appreciation that we'd better express often, and while we can. Our world and our time is fragile, and it's an enthusiastic high-five I offer to Shooter Jennings and Hierophant (and Dave Cobb, Drea, Danny, and Stephen King, etal) for not putting their mouths where the money is, but where their hearts are, with this profound, genre-bending, statement of an album.

"The love of mankind may still come out on top. Our children's children might still live in a better, more beautiful world. Do I believe that? Yeah, with a glass of Jack in one hand, I manage." - Will O' The Wisp

Black Ribbons is available to blow - and expand - your minds. Right now.

*Photos by Paul Gronner
Posted by CJ Gronner at 11:53 AM