The front of Surfing Cowboys is painted with a sign that says "Purveyors of Beach Culture & California Lifestyle" and that pretty much sums it up. Owners Wayne & Donna Gunther have created a bright, happy space filled with all of the items that make the feeling of California living obtainable, wherever you happen to dwell. Old and new come together to create a sense of place that is both a tribute and a groove.

Wayne and Donna met in Chicago, then traveled and worked as photographers until they decided to settle in the space that now houses Surfing Cowboys. They lived in a corner of the back, and as they traversed the world, they collected things for the California house they would one day have. People would come to the store for photo shoots or peek into the windows, wondering what was going on inside, and everyone always commented on how much they loved the things they were seeing. So much so that the Gunthers decided to open a store, to share the things they had, to pass them on to cool homes, and also to have fun. They came up with "Surfing Cowboys" to capture the spirit that both words embody, and that vibe permeates every corner of the shop. 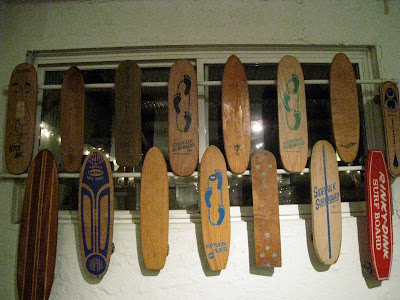 People are always asking the Gunthers where they get their things, and they always say "There is no 'stuff' place" ... they're just always on the road, seeking out gems for the shop, bringing in only things that speak to their hearts, and that they feel will serve as inspiration for those good California vibrations. In fact, they said that people often write "Inspiration" on their receipts to their accountants for purchases made from Surfing Cowboys. That tells you something.

Having been open on Abbot Kinney for over a decade, they know their customers, and are extremely grateful to the Venice community for in turn inspiring them. As all of us have mixed emotions about the change and progress of Venice, and the mix of new and old, so too do Wayne and Donna. They feel strongly that it's up to us to be Preservationists, to protect the spirit of the place, and make sure it keeps its soul. In celebration of that spirit and soul, Surfing Cowboys has mounted a wonderful show from the Collection of Oakland-based John Favors of Hippie Folk Funk Art: Anonymous Social and Political Expression of the 60's and 70's, on now until April 12th. 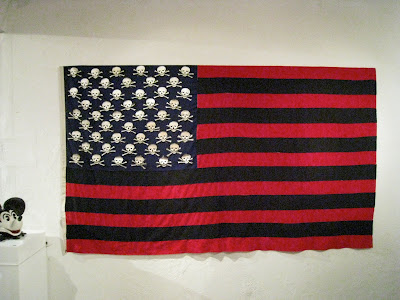 90% of the items displayed in this show are anonymous works, which I like a lot about it. The artists were doing their work not for the bottom line, but because they HAD to. Those times created in artists a NEED to protest, a need to express, and that is evident in how ALIVE it all feels. As Donna said, "These are the collectibles, the folk art, of the future." Wayne added, "People always comment on how bright the store is. Our collective psyche has been lethargic, we've all been muted ... There is a reason that the art is bright ... We need it." The art reflects, "Social justice, politics, music ... and a lot of drugs." For all of the above reasons, it's a perfectly appropriate show for Venice.

Highlights of the show for the Gunthers (and for me) are the big American flag made up of black stripes and skulls in place of stars that Mark Twain (being an anti-Capitalist/Imperialist) suggested as the alternative U.S. flag. Another great piece is the Mickey Mouse head that contains a factory of filth and dollar signs inside its skull. All of it: colorfully painted protest helmets, bejeweled guitars, old skateboards, paintings rife with social commentary, collages, and perhaps my favorite, a wooden Uncle Sam store display that they call "Haight Ashbury Wants You", depict a special place and time, that both realize the value of, and celebrate the spirit of, an entirely bonkers era ... while recognizing the similarities to today's crazy as ever world. 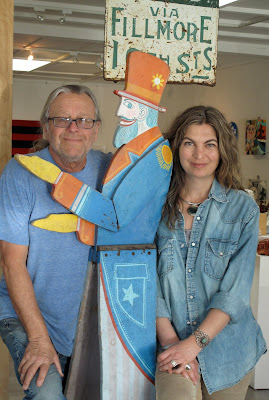 Mr. Favors explained his collection and the impetus behind gathering things that were anonymously done, by saying that "Folk art stands on the strength of its visual vs. the pedigree of the name. Their style was their signature ... they were doing it for the mere ART of it, and so it sings." 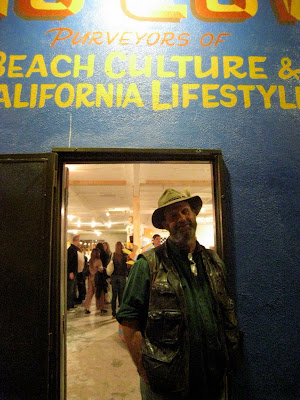 This show indeed sings. It sings of the colorful, radical 60's and 70's, but it also sings of the colorful, radical Venice of today, spirit and energy intact, despite the changes along the way. It was interesting to me that the day after the opening of this Surfing Cowboys show ("Take as many pictures as you want."), I went to the opening of the Peter Max show ("No photography!") on Rodeo Drive in Beverly Hills. While both shows celebrated the colors of the past, it was clear that the bottom line of the Max show was "Selling" (as I was directly told by one of the Gallery workers), while to the anonymous artists of the show on Abbot Kinney, the point was merely Art for Art's sake. Interesting, because art and commerce have been such talking points as to the continued preservation of the Spirit of Venice.

Cheers to the Gunthers for their continued work towards that preservation of spirit, and for being a unique and lively "Cool Stuff Shop." The inventory is always changing, but is constantly a hub of creativity. Stop in to discover, learn, and most of all, to be inspired.