"Travis Lett is a good person. He's an artist too, and his artistry is food." So said my friend, photographer Kwaku Alston when I was doing a story on him (2/16/10)and talking about his favorite Venice spots, of which Travis's restaurant, Gjelina, is most certainly one. I've seen Travis around for years, and couldn't be happier that such a really good guy's business endeavor has taken off so well {Full disclosure: it's one of my favorite Venice spots too, so this is gonna be totally biased, OK? Cool.}. So well that he's a super busy guy and it was only yesterday that we finally had a chance to sit down for a minute and share a few Venice/life stories.

Travis is from New Jersey, grew up there and then headed off to UC-Boulder to study fine art ... painting, sculpting, all of it. He always liked to cook, and his Grandparents were farmers in Ohio, so he grew up with a healthy appreciation for the origins and benefits of naturally grown produce, and the sources of food is still what interests him the most about the field. When interns or someone asks Travis when he decided to be a Chef, his answer is, "I still haven't." Meaning he never chose it as a career, but paid for his art schooling by bumping around as a prep cook, and got really good at it, until a friend in L.A. needed someone to help him open his sushi restaurant (Tengu), and off Travis went, for what he thought would be a few months.

That few months stretched out longer, and after crashing in Hollywood or his car for a while, that got old and he looked for a place in Venice, as he said, "It was obviously the place to be, where I gotta be ...". (I exactly know the feeling he speaks of. Clearly.) He found a place down by Speedway & Horizon, and has been in Venice ever since. 930 in the Westwood W Hotel hired Travis as Chef and he began his "rough draft" concept for what Gjelina would become in the future, by buying everything he could from Farmer's Markets, organic and local, and creating menus based on seasonal availability. This was a bit more radical at the time, especially for a Corporate-owned hotel restaurant, so after a while, it was time again for Travis to move on. (Yay). 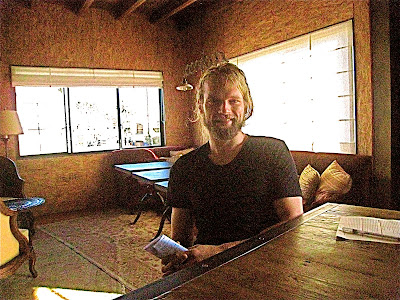 While doing some restaurant consulting gigs, and trying to sort out what was next for him, Travis would walk from his place to Abbot's Habit to get coffee and work, and passed by this building on the corner every day, with an open half-door, with Pit Bulls inside. He's say hello to the dogs and soon got to talking with the owner, Fran Camaj, who just so happened to want to open a restaurant in the space there that he already owned. From the very beginning, they agreed on the local, organic, seasonal approach to a menu, as well as the idea that it needed to reflect the Venice Community. A third partner, Robert Schwan - another long-time Venice resident and restaurant manager (72 Market Street, Wabi Sabi) - shared their vision, and they took a chance on hiring a young Chef in Travis that valued his creative freedom and ideals (Oh, the designers and architect too - all Venice folk). They have backed him up every step of the way, and the mad success of Gjelina has been their reward for their (not much of a) risk.

Gjelina is named for Fran's Albanian mother, hence the Albanian "Gj" spelling. It is always busy, and people are always enjoying it. The back patio is my favorite place to sit, enjoying truly delectable dishes (and maybe some lovely wine?) in the sunshine of the 'hood. When discussing the fruition of his vision, Travis told me that "what's dear about it to me is that we're getting food from the right sources." They purchase their ingredients from local artisan producers, from olive oil makers, to cheese, to the gorgeous produce at the Farmer's Market right up the street. Because of their dedication to this, Travis said, "There is a shifting balance in the way people think about their food, you can feel it happening." And it's because of people like him that this is so.

Travis said he thought that if you communicate with, and understand your customers, offering them a fun, stylish place, with delicious food, created with integrity and in a value-driven sense, Venice would react resoundingly well - and they have. He straight up says that this restaurant was opened with the belief that it was meant to be HERE, for the people of the area, and would be irrelevant out of its context (like when people want him to open one up in Vegas). He wanted it to represent US, and be a place for the Community to gather (and these days the A-list celebrities really seem to want in on that Community too ... what are you gonna do?). The partners' idea was that they wanted to have a place "that seems like it was already here." I think they've nailed that ... that bustling corner of Abbot Kinney now seems like it was always so.

I told Travis that I have a problem, and that is that I love certain things on his menu SO much, that I have to get them every time, lest I be haunted by them for days later (looking at you, Gruyere/Caramelized Onion/Fromage Blanc/Arugula Pizza & Butterscotch Pot de Creme with Salted Caramel and Creme Fraiche - of which I have said I might want it to be my last taste on Earth. For real.). He laughed and said where some people might take off the 4 least-selling items on a menu, he'd rather take off the 4 BEST sellers, so that people try something new, as he wants his guests to "Experience this place WITH me." I promise, in that case, to open my taste buds up next time, at least a little. Which is also why the delish BLT you might love and want every time may not always be on the menu. The tomatoes out of season will not be served by Travis at Gjelina, but when they're back and thriving, you'll appreciate that ol' sandwich all the more. (and those tomatoes will soon be grown right on Gjelina's own rooftop garden!) The same bit of a rebel (in a city - Greater L.A. - of ass-kissers, let's face it) yell comes out with Travis in the little comment on the front of the menu that says, "changes and modifications politely declined". I completely respect this, as I feel like it's his vision, no ma'am, you cannot have your dressing on the side, hold the everything, annoying little requests. But Travis explains it more like it's not his elite Chef that knows everything better than you stance, it's that "I'm kind of a Socialist when it comes to my Restaurant ... I want to please everyone the same." So the dishes are all prepared the same way, he encourages his staff to not spend extra energy on one person over another, and if customers are cool, they may get the extra attention to their experience, vs. the ones who like to hear themselves bitch about everything (my read on them, not his). 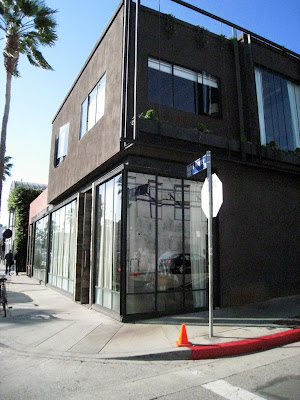 We chatted in the sunny, huge-window-ed upstairs of Gjelina, that is now a cool apartment-type place to kick it, but may soon host private dinner affairs. What a great space to talk about Venice and one's place in it - overlooking all the AKB businesses and foot traffic, people honking, waving, and dinging bike bells below us.

And speaking of bike bells ... I was telling Travis about my stolen/returned Delores the Bike story to explain my desire to build Community and tell our stories to each other, and it turns out he has a good one of his own. His Beach Cruiser was taken from his yard, an all too often told bummer of a tale. He wrote it off, and hoofed it around instead for about six months. Then one day he was leaving his house and there was his bike, back in the yard, having been fully improved, complete with freshly pumped up tires, and even some replaced parts. He said there may have been some Burning Man Playa dust on it, but he couldn't be sure if it was the thief's, or his own leftover memories. How about that?! Another one that makes you go, "Only in Venice". That would also go for Travis's feelings about Gjelina, and where he wants to be.

(Extra points if you can bike or walk there. Which we can.)