The Old Man & The Sea

March feels crazy. From the political fighting, to the loss of two friends in one week (Peace to Dr. John Michel and Nichole Stavros Jenny), and I really could go on ... it's all been a bit aggro lately. Which is why an interaction I have most weekday mornings is so special.

There is a little group of Russian expatriate Senior Citizens that come to sit and look at the Ocean each morning in the shade of the Police Station/Poetry Wall (I love that irony, by the way). All the little old ladies are fully made and dressed up, and they visit - and sometimes sing - in Russian, so happy and appreciative just to be out there looking at the stunning morning.

One old gentleman (like 90's old) always sits apart from the others, and parks his chair with wheels (not a wheelchair) right next to where we park our bikes each morning. After exchanging smiles and waves for a while, I finally asked his name. "Leon", (pronounced like Lyon in a thick Russian accent) he said as he grasped my hands tightly. So since then, I go over to him every time and we hold hands for a minute and eke out a small-talk exchange about how absolutely beautiful the day is, usually. It always lifts my spirits because he's so dang happy to see you, and also funny, as it seems like he sits apart from the others so they don't cramp his style or something.

I hadn't seen Leon in about a week, and after losing Dr. John before ever really hearing his whole story, I started to get nervous that maybe he wasn't well. Yesterday, amid all the chaos of the swirling world - and my own kaleidoscopic thoughts - I looked up to see Leon sitting in his usual spot when we returned from our morning constitutional. We both lit up to see each other, and I rushed over to greet him/hand hold. As we were pecking out a conversation, a lovely old woman strolled up, almost shouting, "Tank you! Tank you! He ees my husband, he tell me about you! He love you!" 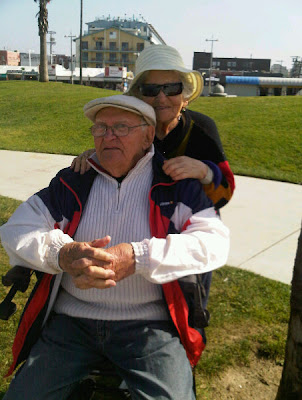 Now I felt both a bit busted, and completely heart-warmed. Evidenced by the love shining out of the eyes of both of these gems - for each other, but also for Jenny and I - a mere fleeting moment of greeting and connection per day is a big, big deal. And you know what? I feel the same way. The clear appreciation between two people that don't know each others' stories or pasts, and can't even speak each others' languages, but care and take the time to let each other know that ... well, these days, that IS a big deal. I've long said that my favorite genres of people are babies and old people ... and that's mostly for their honesty.

"We veel talk sometime, I veel translate!", said Mrs. Leon (I still couldn't make out her name after three times), so stay tuned for the epic Russian saga sure to come from that.

No one knows what tomorrow may bring, so amid the March Madness, I encourage you to let your people know that they are loved. From your Mom, to the Old Man and The Sea. 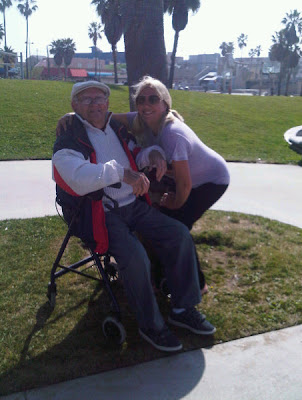 "Everything about him was old except his eyes, and they were the same color as the sea, and were cheerful and undefeated."

Cheerful and undefeated ... that's us. Me and Leon.