Most people who have lived in Venice for a certain amount of time have been served an adult beverage by John Henry Binder and/or Christian Warren, bartenders extraordinaire. Binder was voted Best Bartender in the L.A. Weekly in 2017 for his many years of service at James Beach, and Warren has gone on to have his own bar,  the very popular Melody Bar on Sepulveda near LAX. Being so good at their jobs, these good fellows thought they should also have their own spirits brand ... and thought, "Venice has got to have its own beer", and thus, Venice Duck Beer was born. 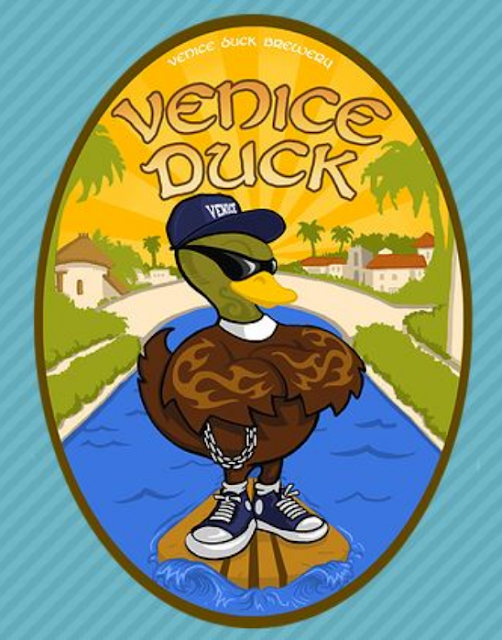 Let's go back in time a little ... I sat down with these gents one recent happy hour and heard the story of Venice Duck where it all began, there at the bar in James Beach. Binder was born in New York, and came out to L.A. when he was 12 to live with his Dad, a documentary filmmaker (he shot Woodstock!). He got into acting (playing a kid in Popeye when he was 10!), and attended UC Santa Barbara. Digging the beach, Binder made his way down the coast to Venice in 1993, and began his illustrious career as one of our most beloved barkeeps. A stint at Typhoon in Santa Monica taught him all the mixology ropes, and led him to the then new James Beach in 1996, where he has been ever since.

One drinking night at Hal's, Binder was introduced to Warren by the Hal's bartender, Happy, and they became fast friends. Warren was born in San Francisco, and also made his way to L.A. to be an actor like so many before him. He got a gig working at the then super hot Whiskey Bar in Hollywood, where he learned the bartending trade (after paying bar backing and valet dues). He wasn't feeling Hollywood, and says, "There was something familiar about Venice that made you feel at home ... and everyone was cool" (those were the days, right?!). He soon got a gig at Baja Cantina (when that place was super happening), where he worked for six years, and earned the nickname "Elvis" from a fellow bartender who observed him making out with all the customers and said it was "like working with Elvis". Ah, the good old days! 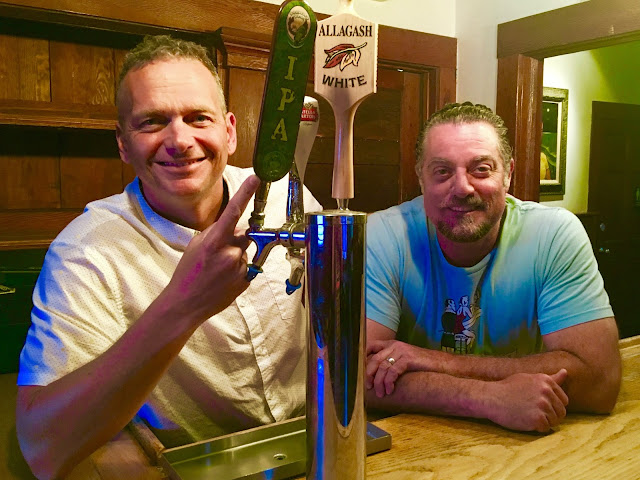 Warren then came to work at James Beach (for a mere six months), and that is where the idea for Venice Duck Beer came up one late night after a shift. Binder and Warren were in back sipping on their Sierra Nevadas in 2002, and the "Wouldn't it be cool if there was a Venice beer?" talk started. Something like the Sierra Nevada they were drinking, but VENICE. Their friend, Happy, had told them about a drunken night when he passed out in the Canals on the way home, and woke up to find a flock of Venice ducks had covered his body with theirs, to keep him or themselves warm. It was a funny story, but Binder thought, "Venice ducks will always be here ... that's the name." 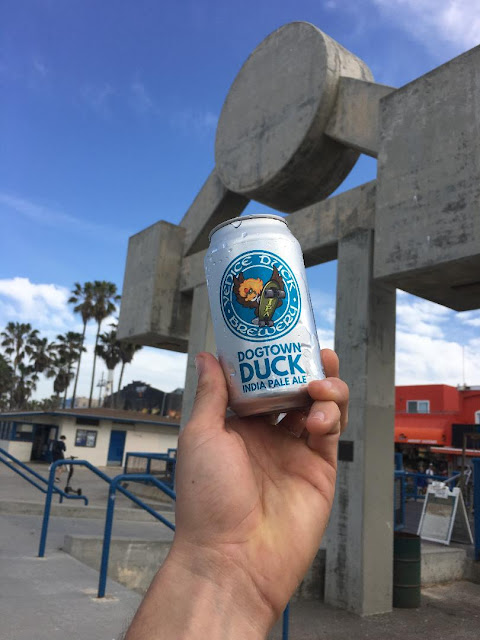 Time passed, both guys had kids and a lot of other things going on, and nothing happened with their beer idea. Warren bought and sold the Makai bar in Santa Monica in two years, and then opened the Melody Bar, which kept him real busy, remodeling and refining it. Binder was tending bar at James, and raising his family, when Warren came back and told Binder the time for Venice Duck was now, with the craft beer industry exploding. They had meetings with investors (friends) and did fundraising, and went about finding the right brewmaster. They wanted to brew their beer in Venice, but you need an industrial area and there wasn't one. They found their guy in San Jose, and soon (after much trial and error) they had their Venice Dogtown Duck IPA. 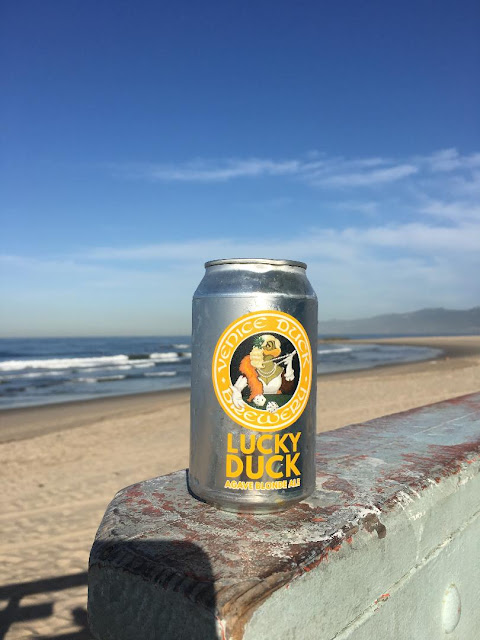 Lucky Duck (an agave nectar blonde ale) and Stoner Duck (hemp seed nut brown ale) soon followed, and all have their own Venice story. Dogtown and Stoner are obvious, but the Lucky Duck is inspired by the flapper-era ladies who one would meet in prohibition booze smuggling tunnels legendary in Venice. And coming soon - NALU, a hard seltzer from the Venice Duck guys (like Truly or White Claw) with yum organic flavors like yuzu and ginger. Awesome. 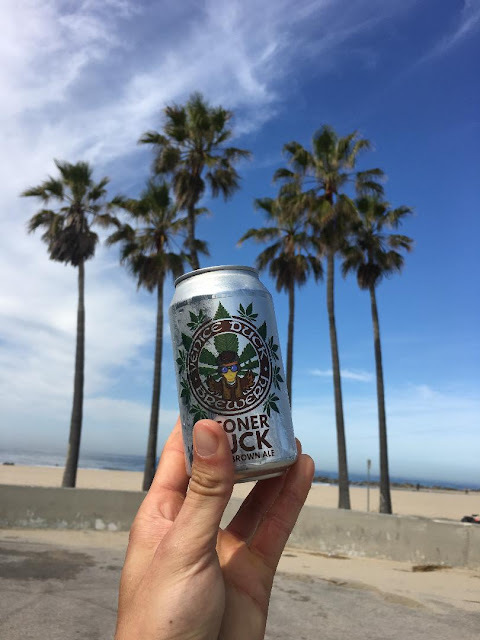 After starting out by self-distributing their wares around town, Venice Duck was taken on by Southern Wine and Spirits, the largest alcohol distributor in the United States. It can be found, of course, at the Melody Bar and James Beach on tap, but also Mercedes Grille, Cheesecake Factory, Umami Burgers, LAX, various liquor stores, and they're only growing larger every day. "The dream is to keep growing and have people drink it internationally, but come to Venice one day to drink it in its home," says Warren. And they envision that Venice home to be their own tasting room in Venice proper. Stay tuned for that excellence. 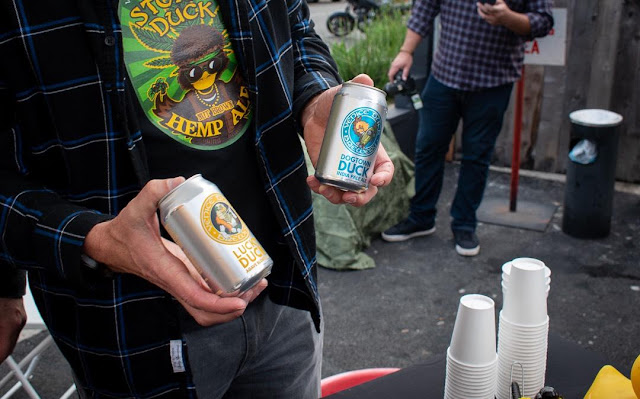 Binder takes his role as a Venice bartender very seriously, and isn't interested in being a flashy, trendy mixologist. He's more about making everyone feel special and important as they sit with him and drink their beverage of choice. That care for his customers is obvious as a nonstop stream of friends and well-wishers forced this interview to happen in two parts, so busy was he mixing cocktails and shooting the breeze, giving high fives and hugs left and right. That speaks to what Warren said as we sat there at Binder's bar ... "Venice always feels like home, it has changed, but there's always something magical about it. Everyone embraces everyone, and there are so many cool, eclectic, interesting people ... People still come and fall in love with Venice." 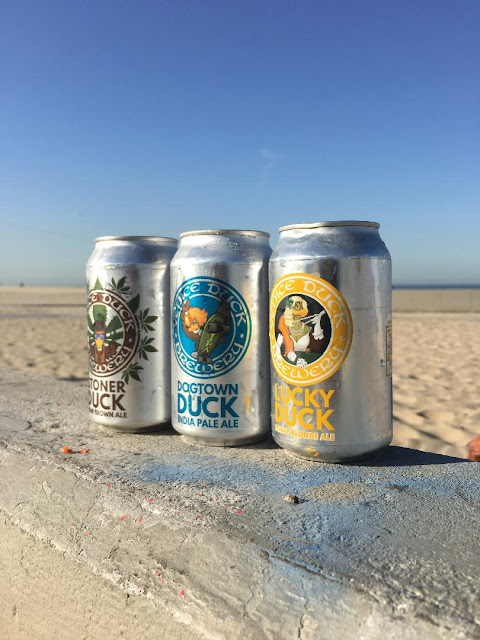 We wrapped up our chat and our drinks (spicy prickly pear margarita for me, thanks John Henry!) with Warren saying the following truth: "Once Venice touches your heart, it's in you, and you will always have it with you." That's right, and that's why we'll always love it.

I grew up in Minnesota where the kid game was "Duck, Duck, Grey Duck!" (Never "Goose"). In Venice, it's Duck, Duck, Venice Duck - every time.

Venice Duck is available on tap, in the can, or in the bottle at fine restaurants and liquor stores all over Venice and beyond - or will be. Check the website below for the latest vendors.